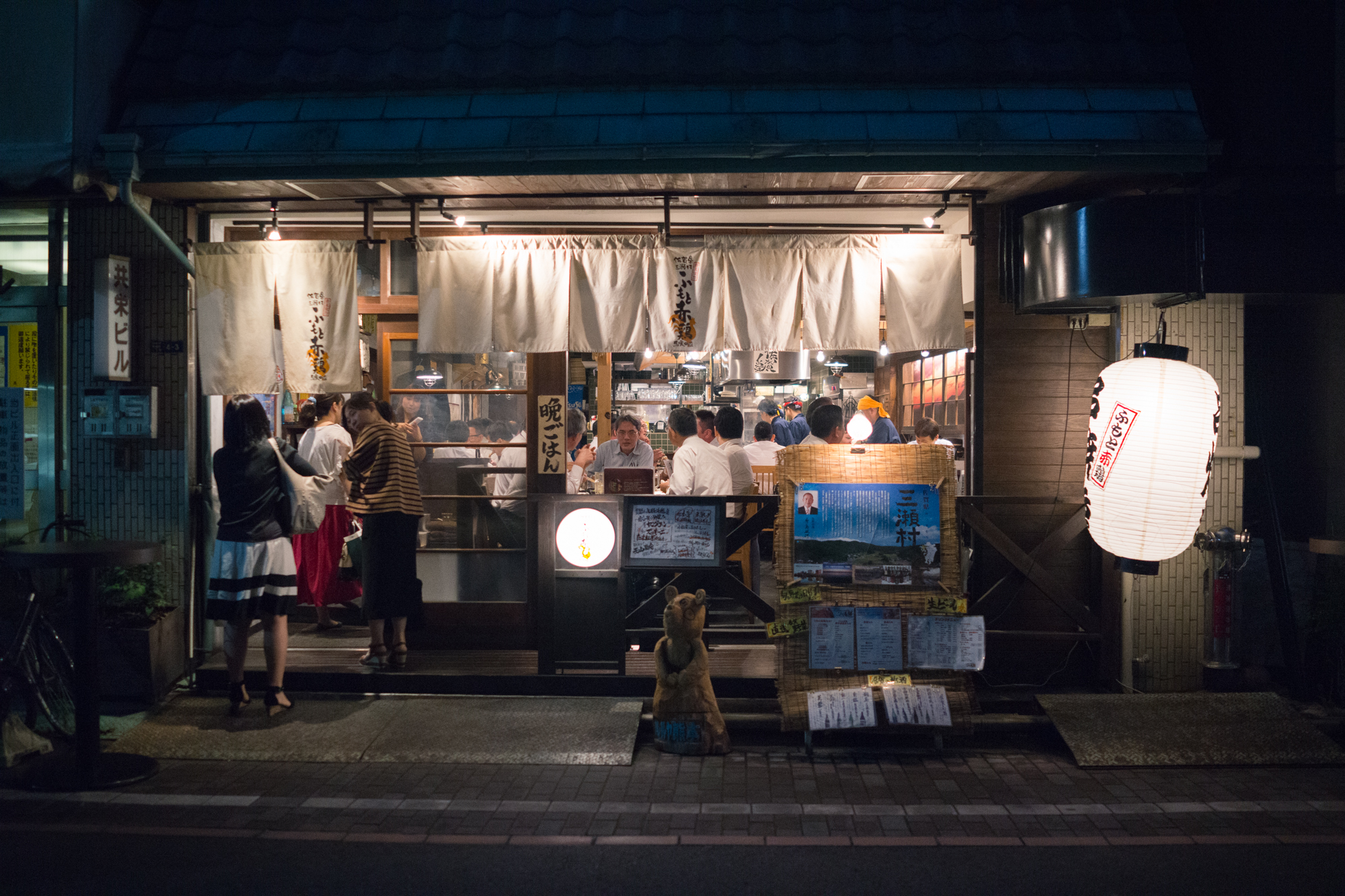 We’ve officially arrived in Japan: jet-lagged, sweaty, and already in love. So far the weather hasn’t been as bad as I expected—I was picturing soul-crushing humidity, and have instead been pleasantly surprised with a mildly choking summer heat.

Our flight landed safely at 3 pm on Wednesday. If you’ve ever been to Japan, you know that Japanese are praised for their hospitality, a sentiment we found extends even to air travel. We took an 11-hour direct service via ANA Airlines, which I’d dare say was nearly enjoyable, mostly thanks to mini Hagan Daz vanilla ice cream cups, free beer and wine (!), and meal trays that don’t remind you of elementary cafeteria lunches. We spent the early hours of the flight watching Kimi No Na Wa (“Your Name” in English), a beautiful feat of animation, soundtrack, and story, weaved together to create the world’s top grossing anime. Do yourself a favor and watch it immediately. Warning: tears may be shed. 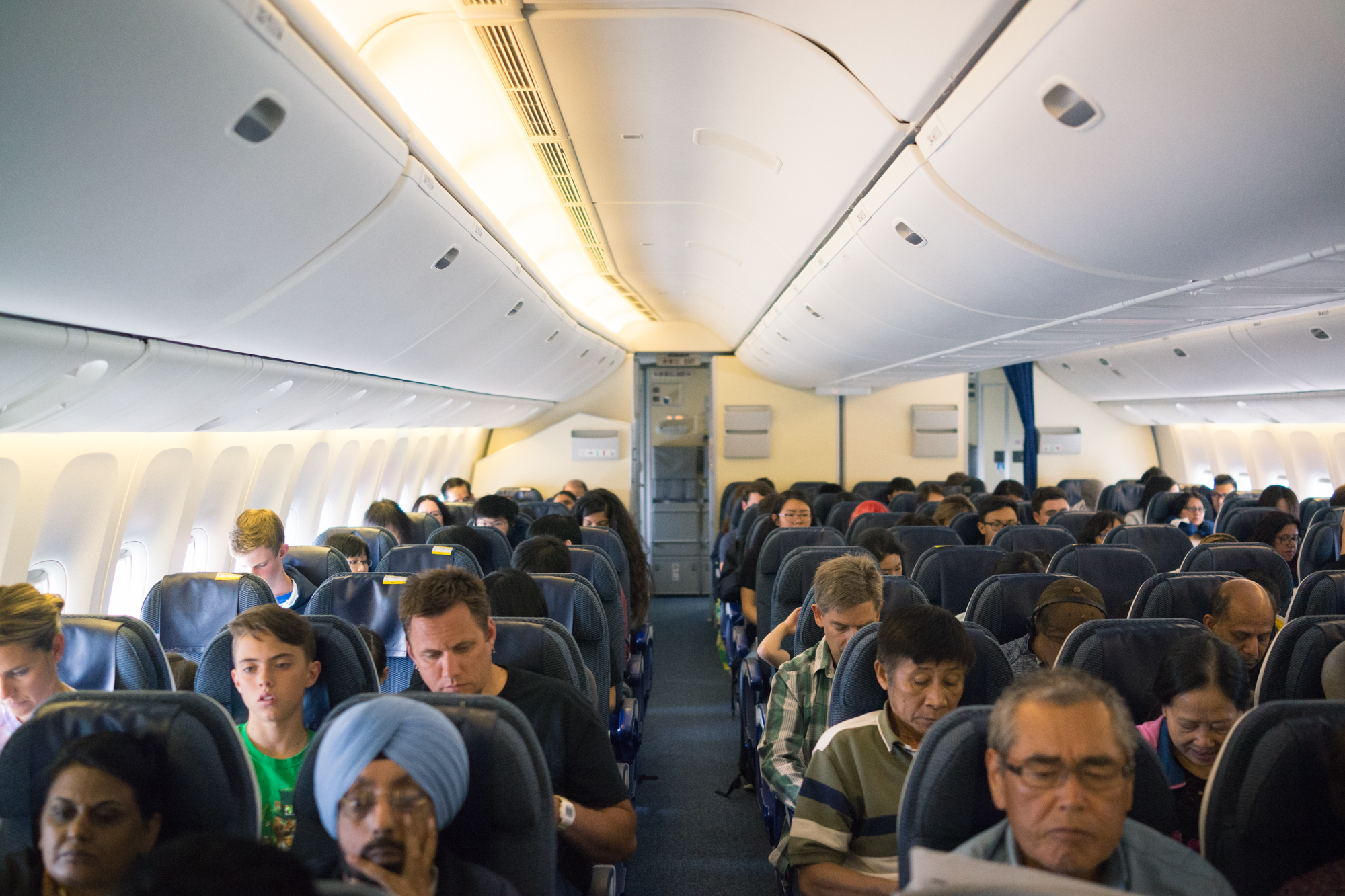 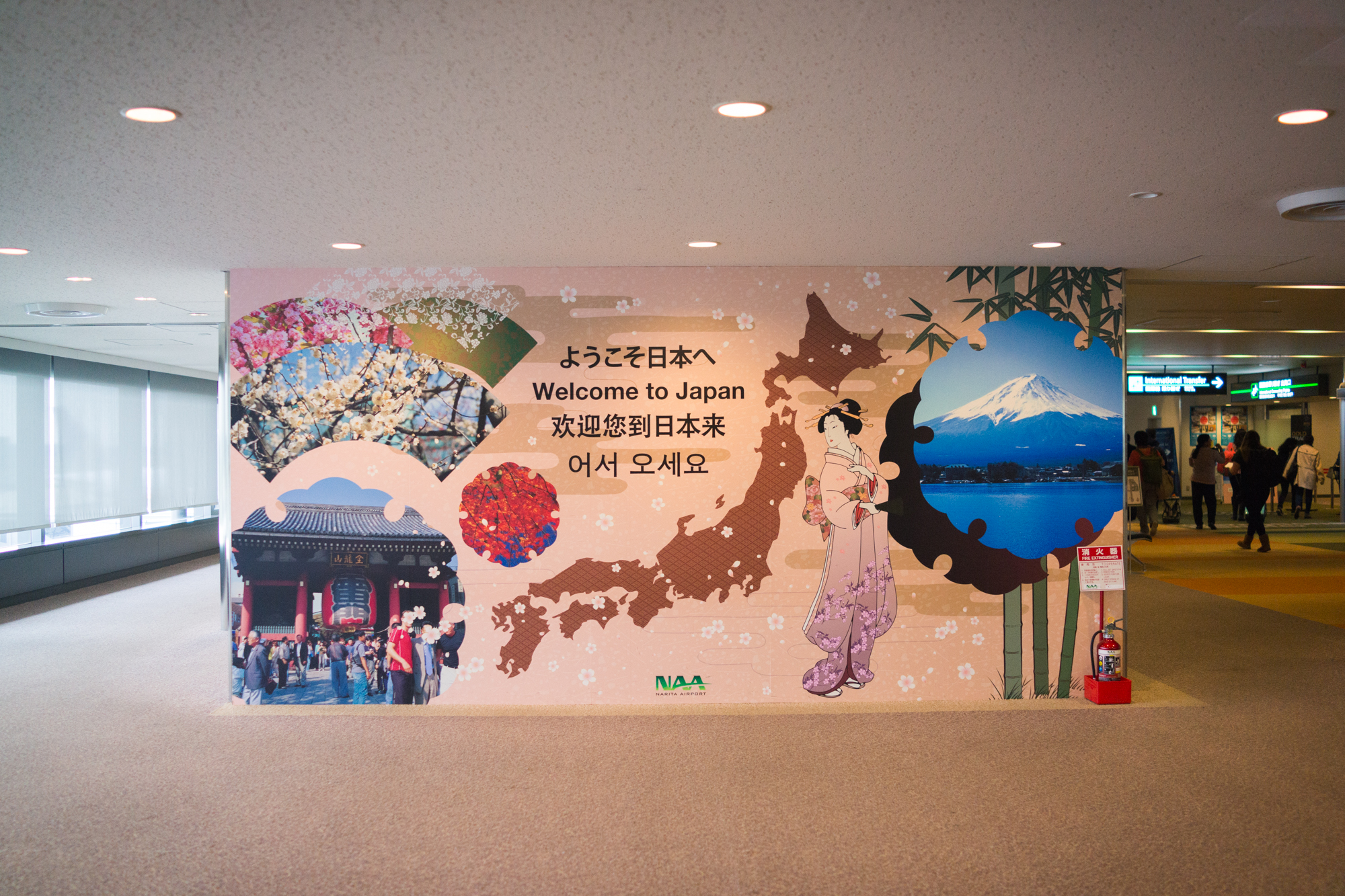 Arriving in Tokyo felt a lot like arriving in America. It wasn’t until we sat down on our first train that the feeling of being in Japan really hit us. The Tokyo metro was everything a rail system should be: clean, bright, easy to navigate, and startlingly quiet (as opposed to BART’s loud, oppressive screeching). Is it sad to say that a functioning underground is a culture shock in itself?
We passed the time gaping out the window at Japanese suburban roads, admiring the greenery and little houses that looked straight out of a manga series. Japan has been my dream country since back in my extra nerdy middle school days (I almost chose to study abroad here instead of Paris), and coming here still feels very unreal. 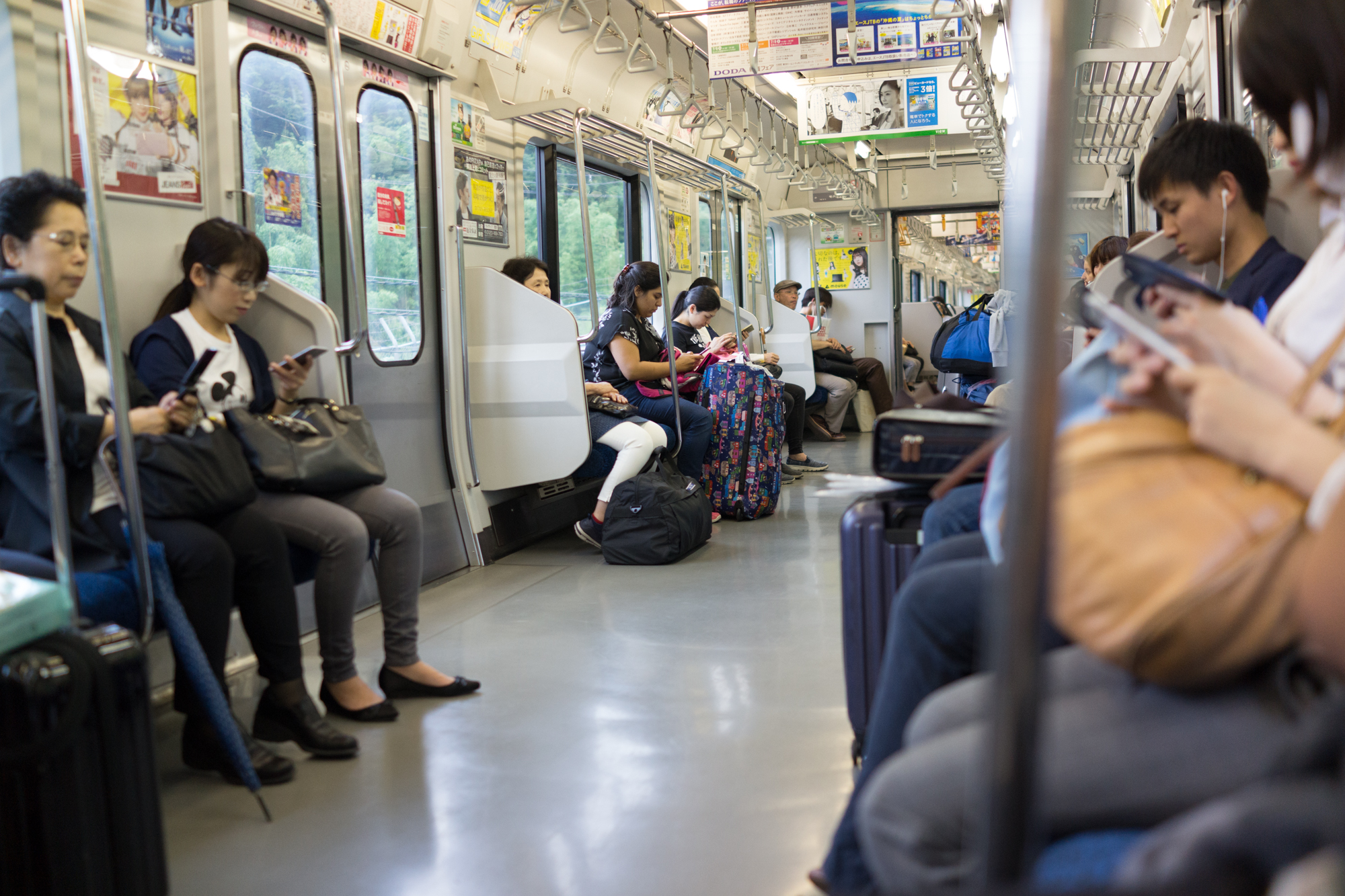 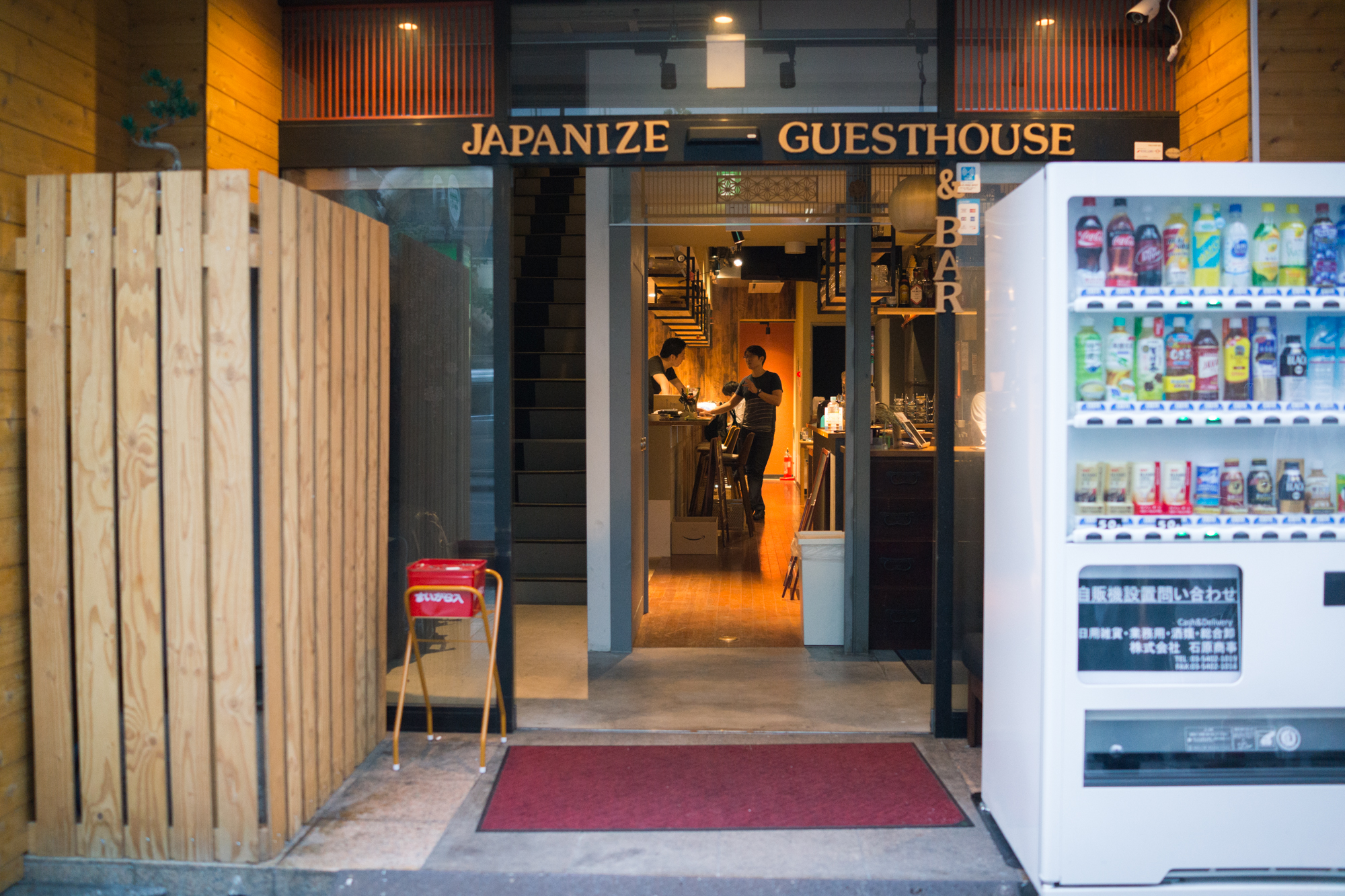 Our hostel, Japanize Guesthouse, is located in east Chiyoda area. It’s about an hour and a half’s journey from Narita Airport, and when we exited the station, it was clear that Japan truly is a country that knows what it’s doing. The streets are completely clear of litter, residents are impeccably dressed, and cars are shaped in perfect rectangles that fit snugly together like a classic game of IQ Car.
After checking in, unpacking, and contemplating a shower (it’s surprising how smelly one gets from sleeping and watching movies for 11 hours), we looked up directions for a nearby ramen shop, discovered à la Tripadvisor. 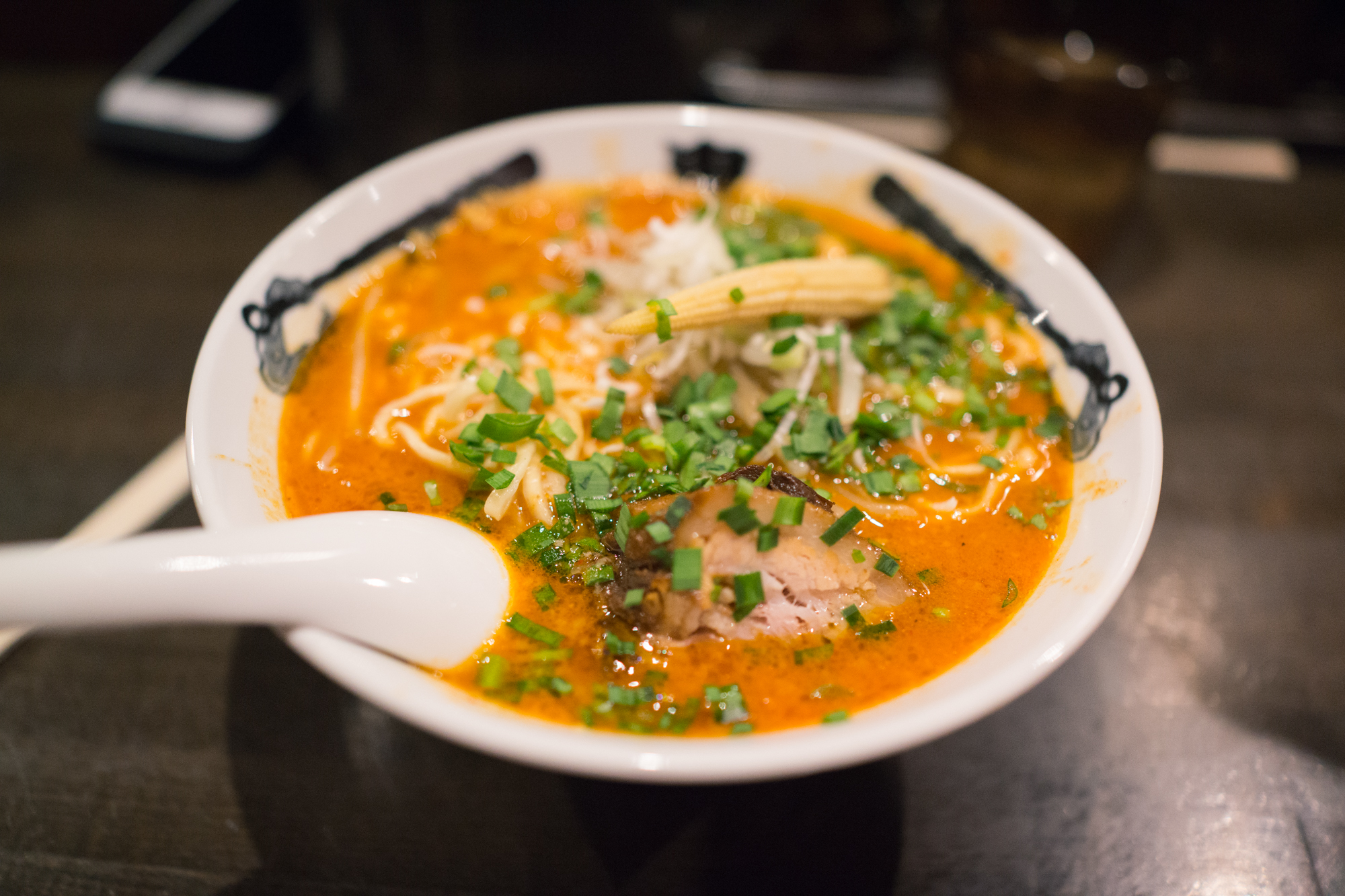 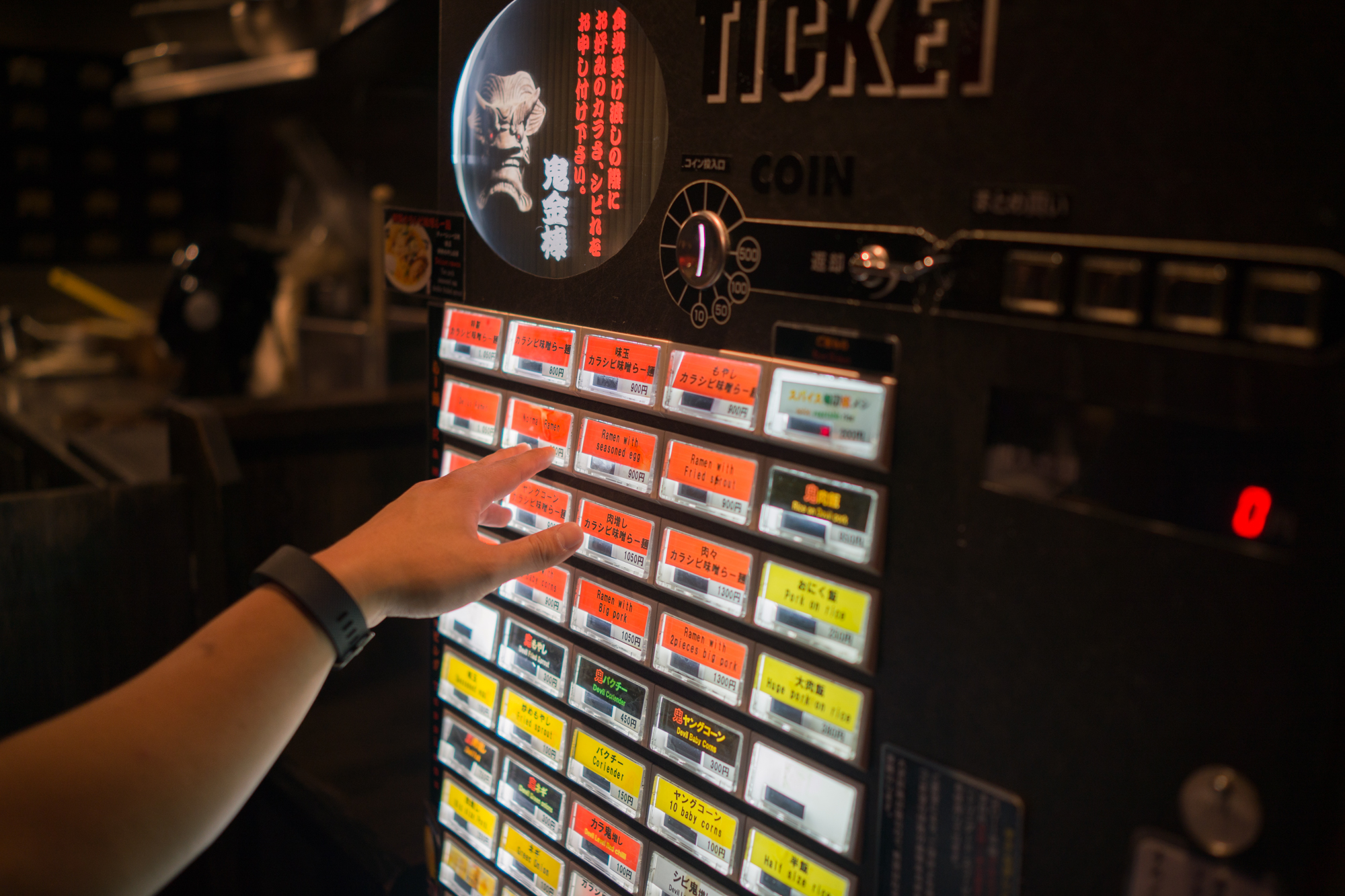 Kikanbo, which specializes in spicy miso broth, turned out to be a quintessential Japanese eating experience: place your order via vending machine, sit down at a wooden bar spanning a narrow hallway, tie on a disposable bib, sweat bullets over a steamy bowl of thick sliced pork and hand-pulled noodles, slurp happily as you listen to the sound of line cooks shouting orders in Japanese to one another. The whole thing was over in less than 15 minutes.
We ended up eating later than expected because despite being located just a few blocks away, we couldn’t resist walking into every convenience store we came across. 7-Elevens are kind of a thing here, which makes Joel and I unreasonably excited (we’re strangely affectionate towards foreign convenience stores). The chain was bought out by Japanese in the 1990s, and took what was originally an American concept and elevated it to something unrecognizable compared to standards back home. Your usual choices of heat lamp chicken fingers and stale coffee dispensers are replaced with a dizzying array of matcha sponge cakes, strawberry chai lattes, pre-packaged soba bowls, individually wrapped onigiri stuffed with pickled plum, and so much more. After about ten minutes of picture-taking and enthusiastically exclaiming “hey look at this!” at every quirky package we come across, we settle on a Ramune popsicle and mango pudding to end our first day in the city. 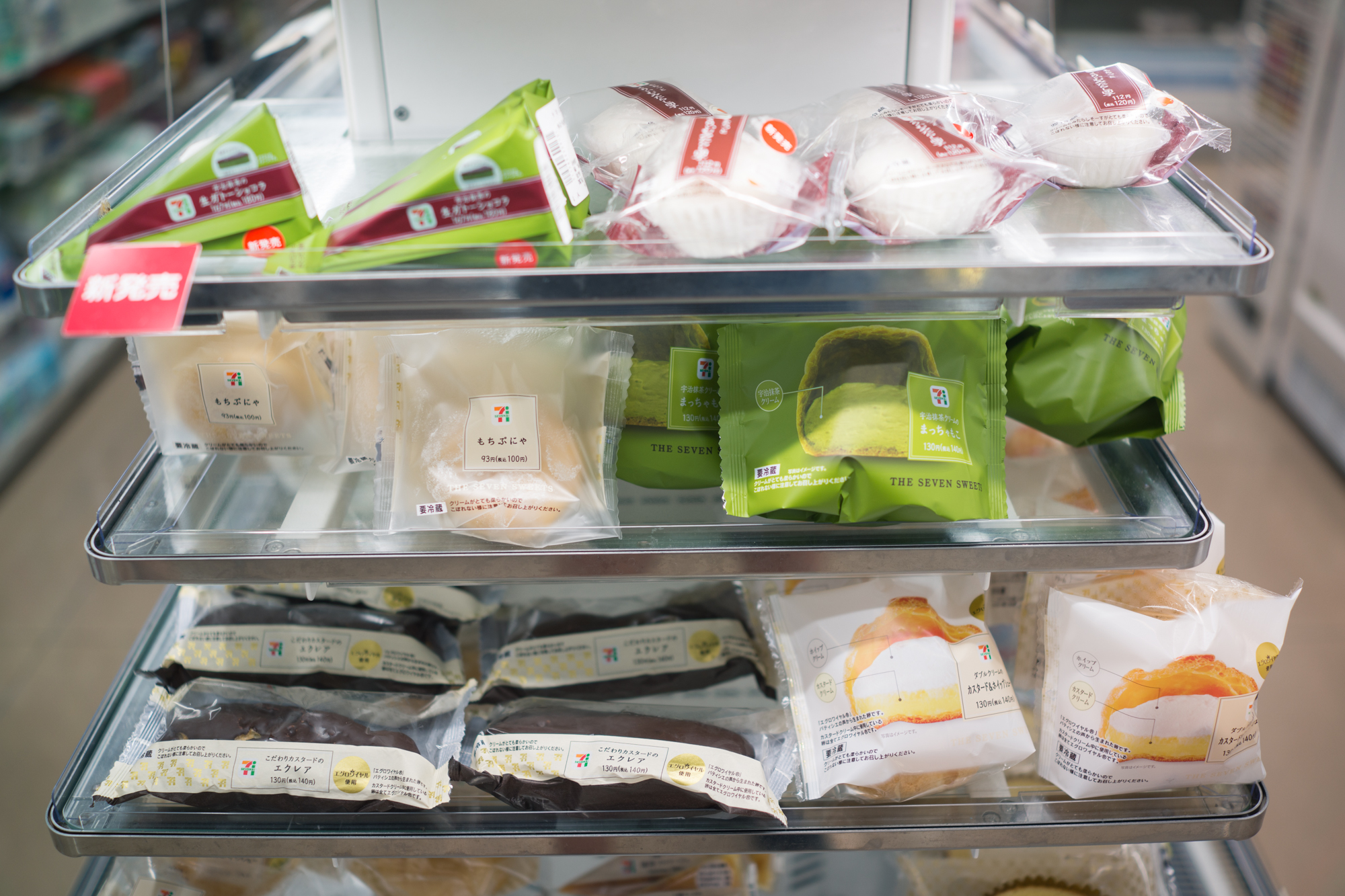 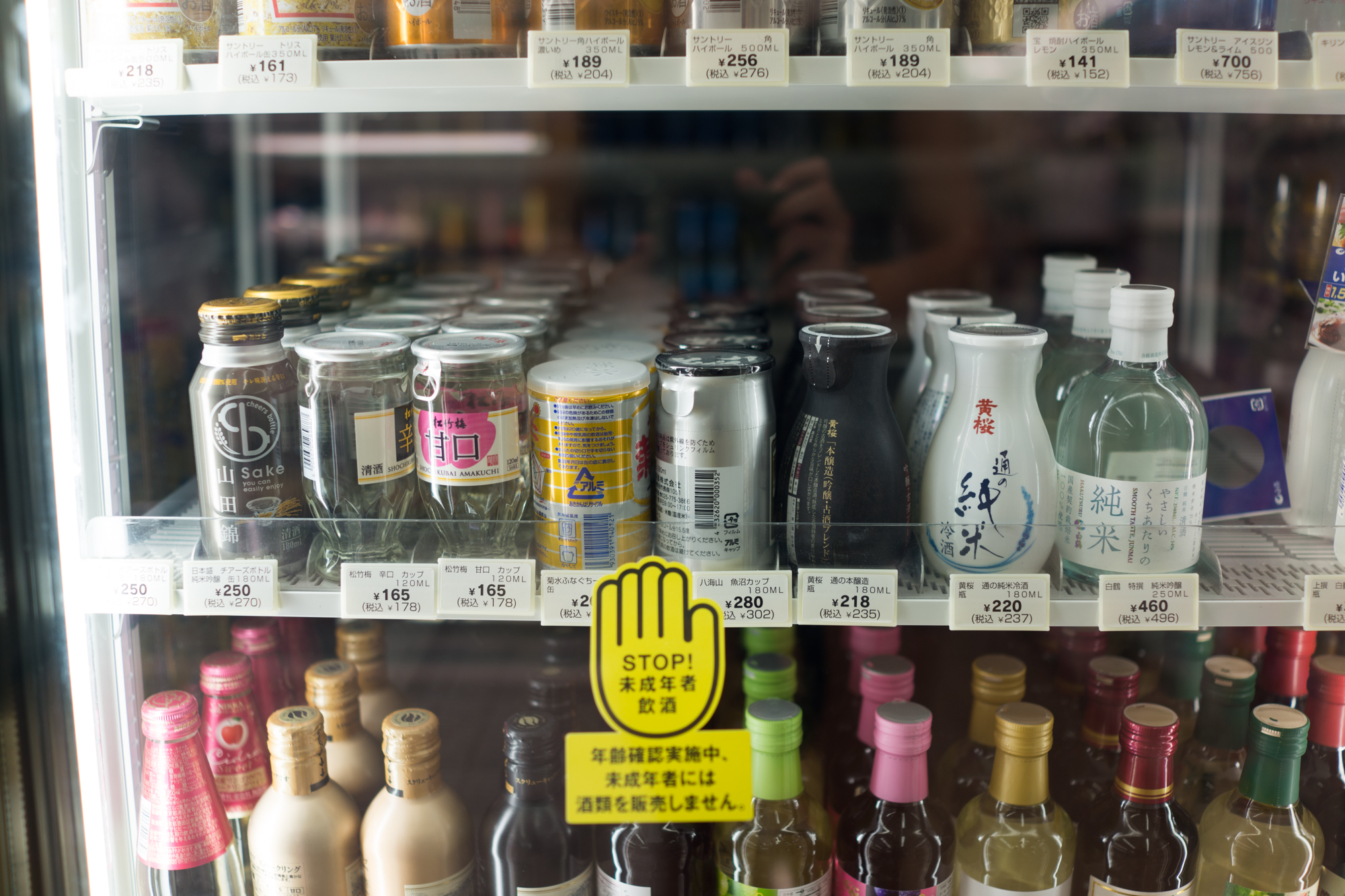 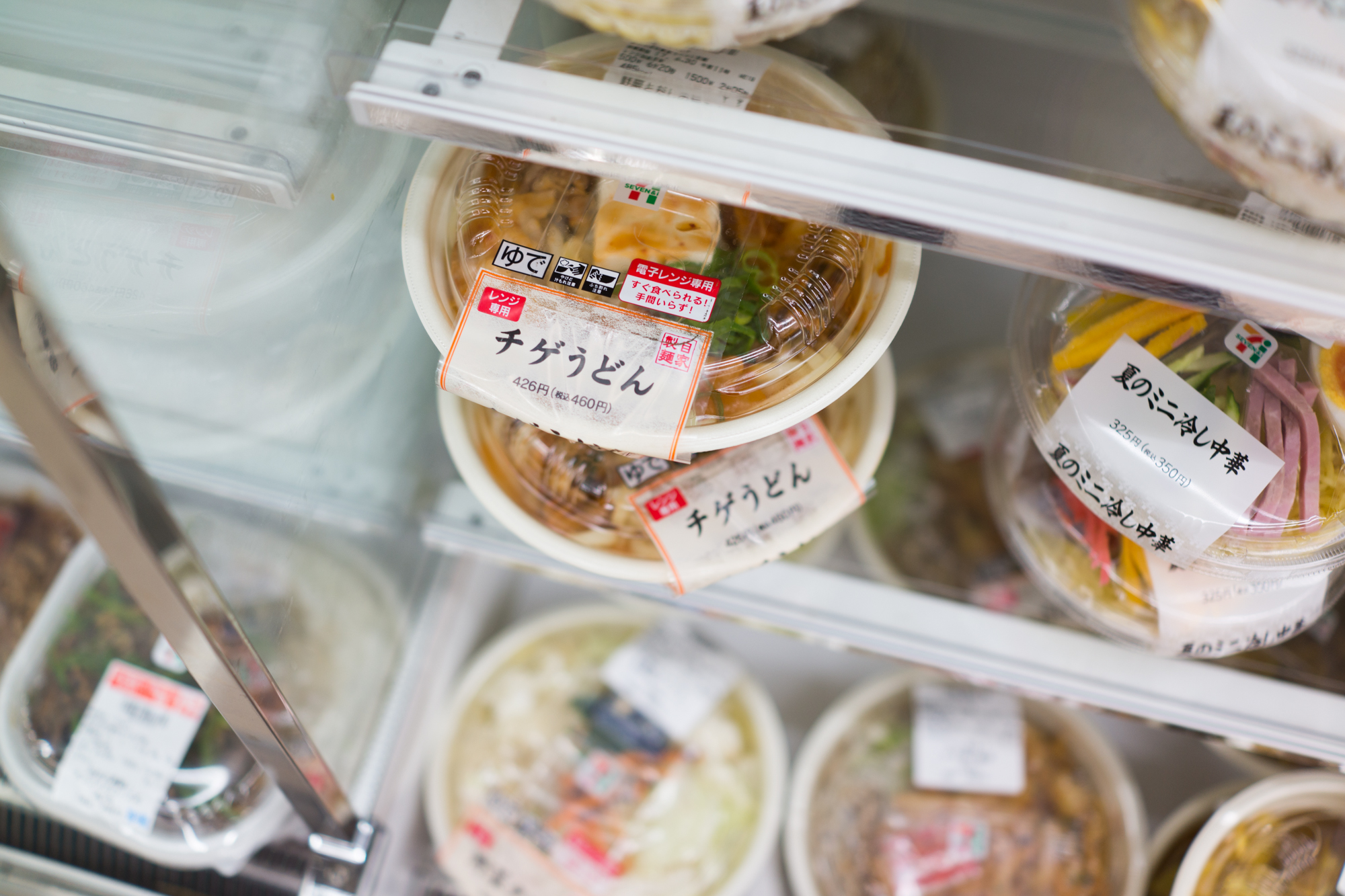 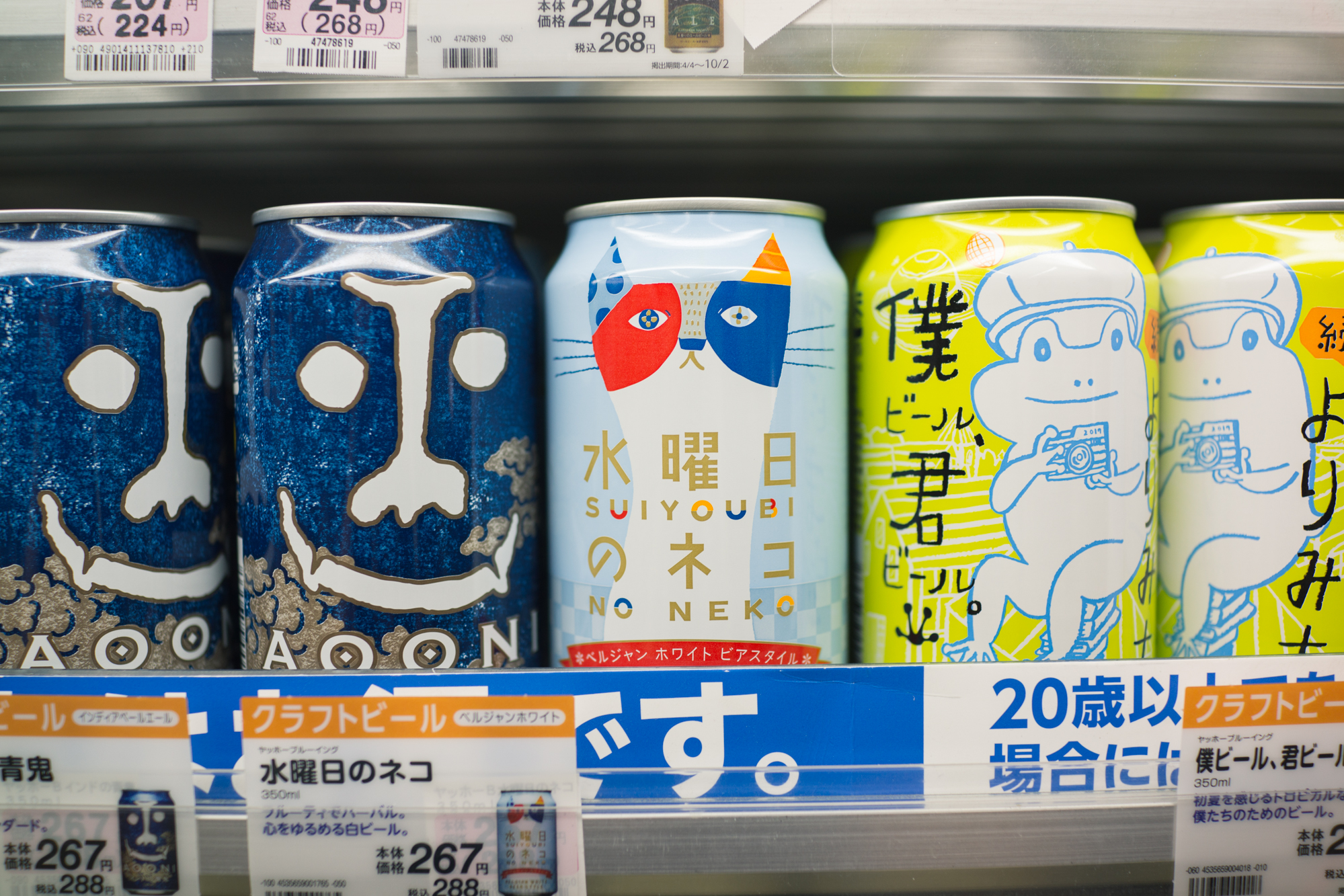 Except it wasn’t really the end, because rather than turn in early, we took a brief power nap and woke up just before midnight to catch a train to Tsukiji.
– Anna