Even at 3 am, Tsukiji Market is electric. Turret trucks zip in and out of alleys like Mario Kart racers. Workers shuffle between shops, preparing for the day ahead. It’s the kind of place that engages all the senses in one fell swoop: the smell of freshly sliced tuna, the sound of scooters whizzing by, the sight of hazy skyscrapers towering over the market’s squat buildings. The feeling of a salty breeze cutting through the muggy evening air. And most importantly, the taste of nigiri for breakfast.

Joel and I decided to celebrate our first day in Tokyo with a 5 am visit to Sushi Dai, Tsukiji’s most acclaimed sushi restaurant, and infamous for its long queues. 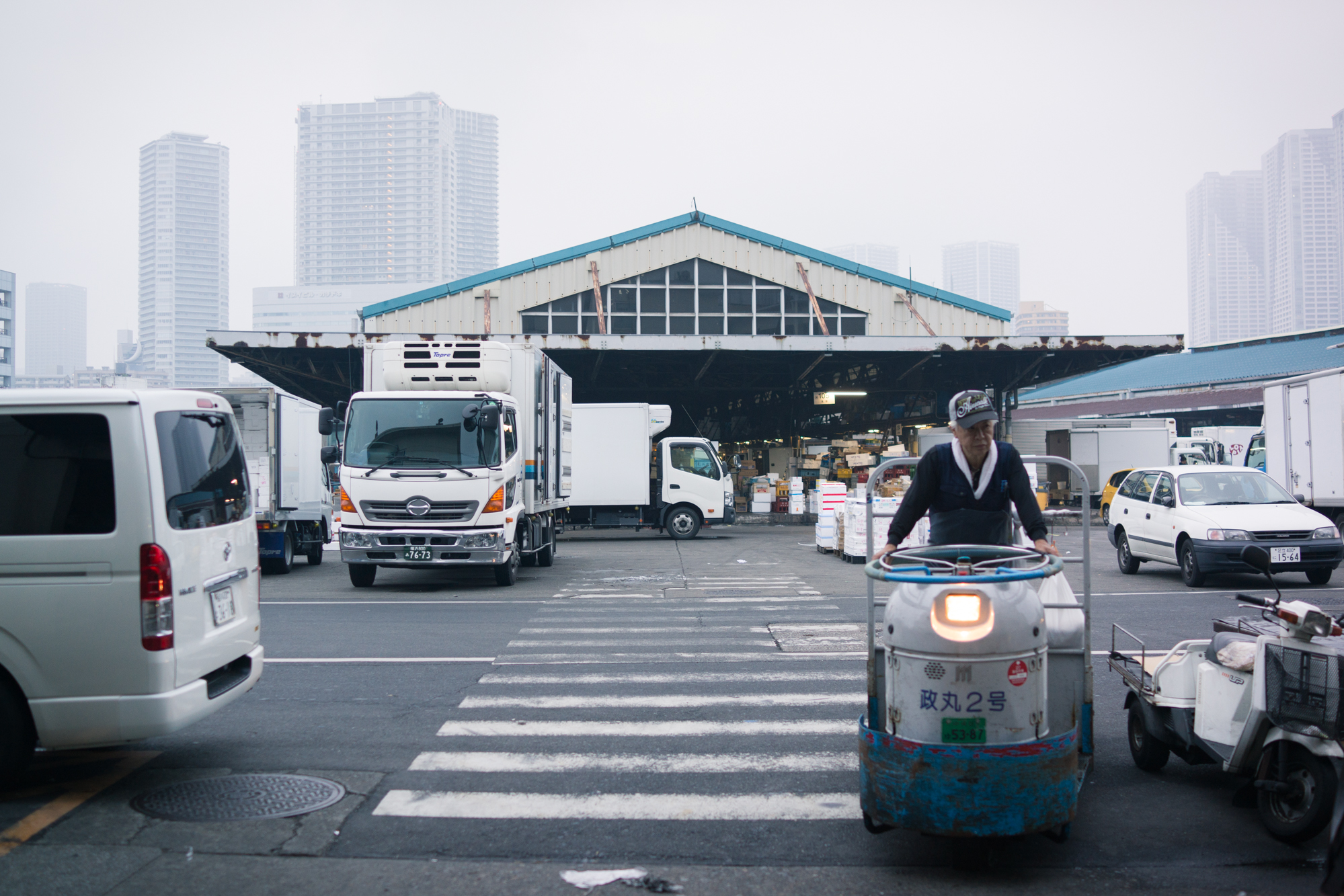 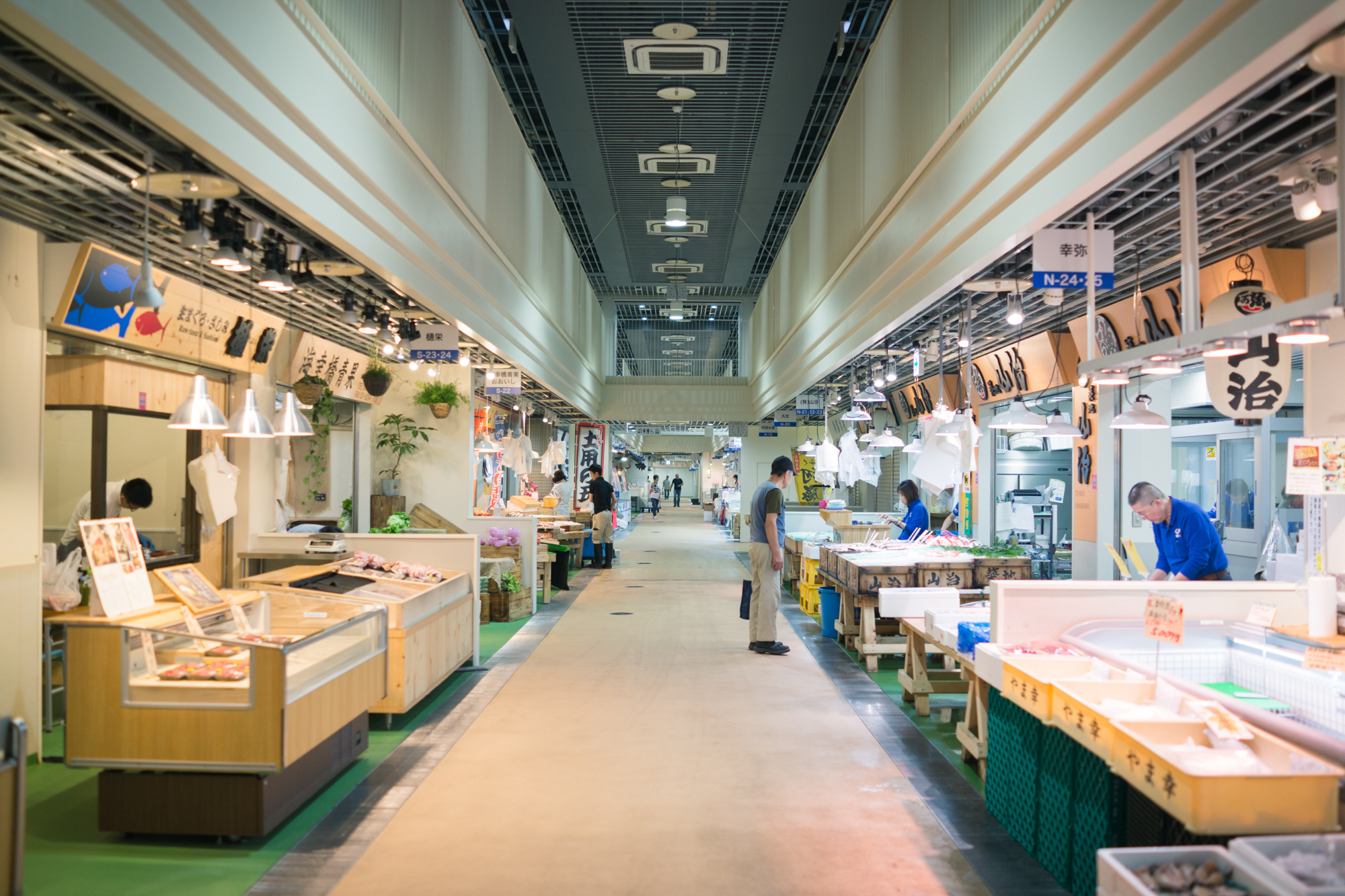 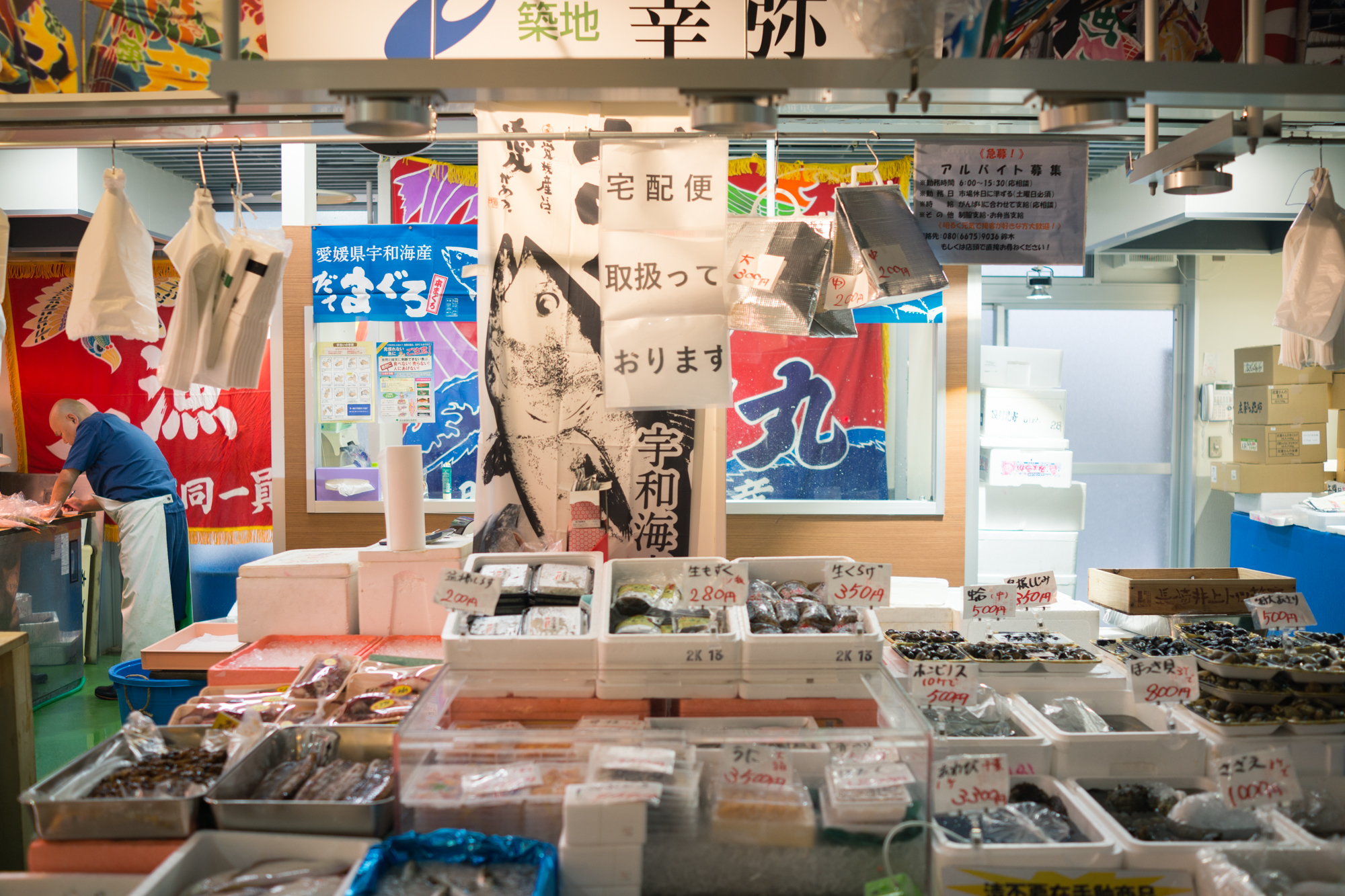 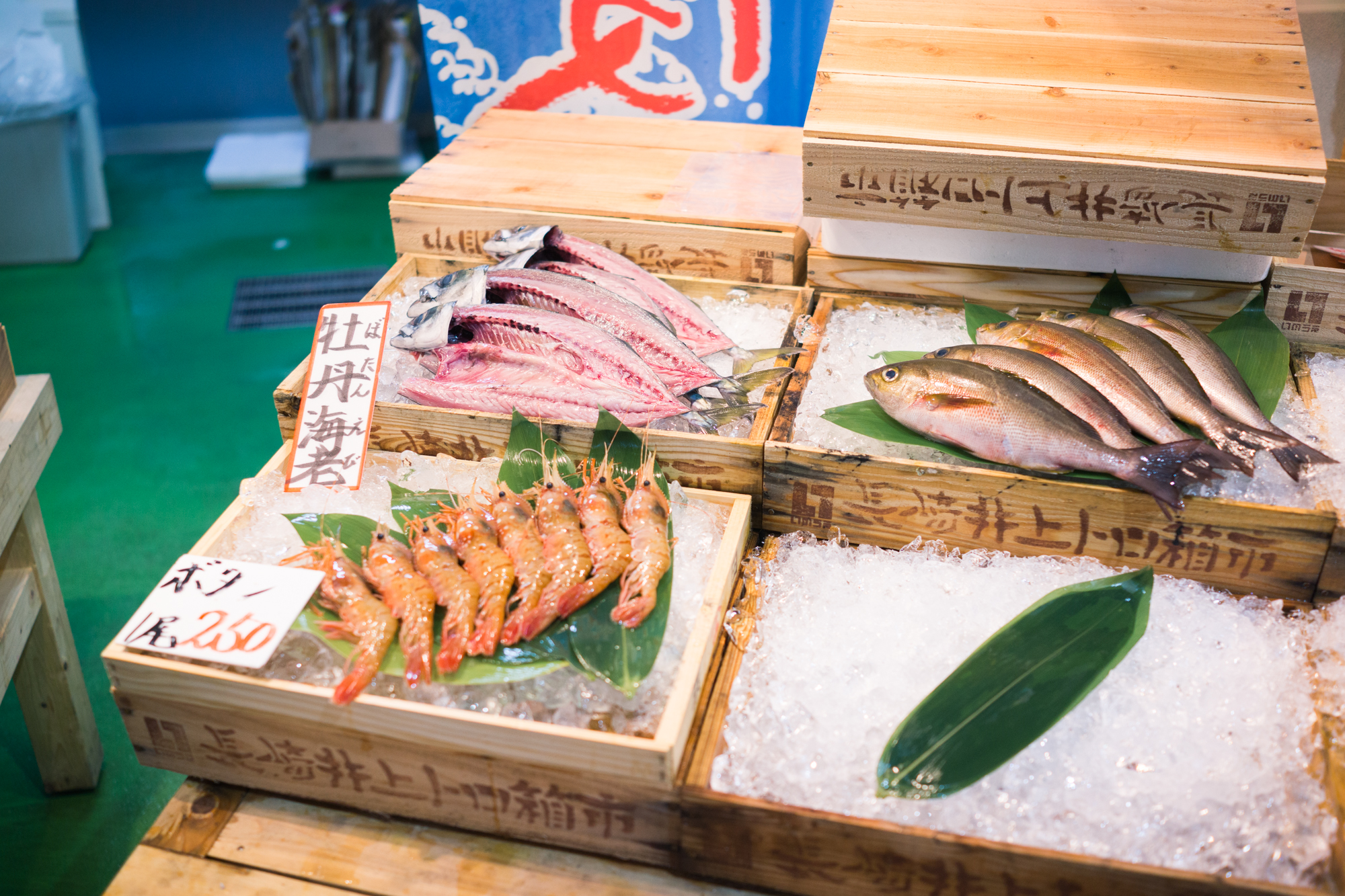 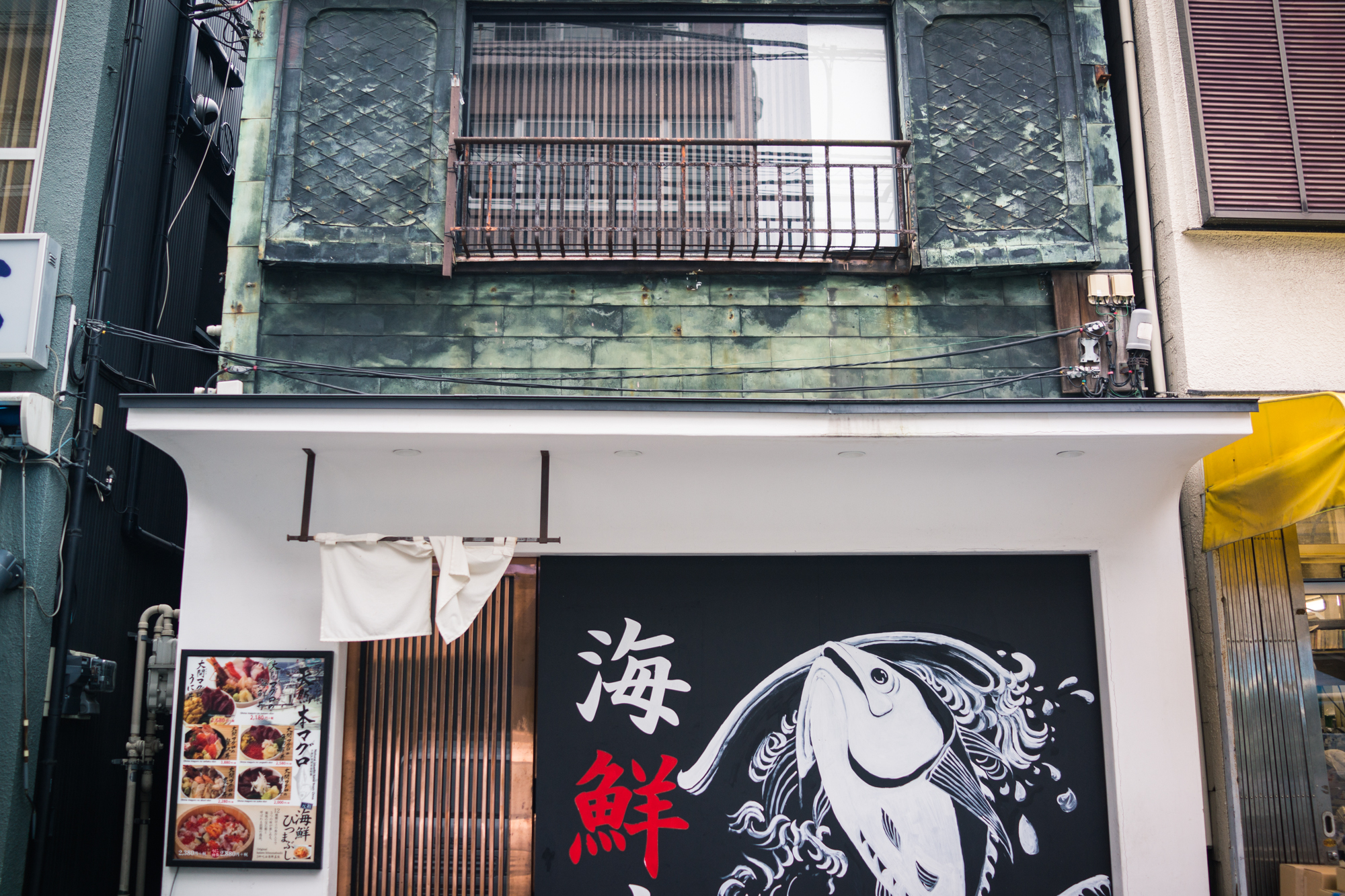 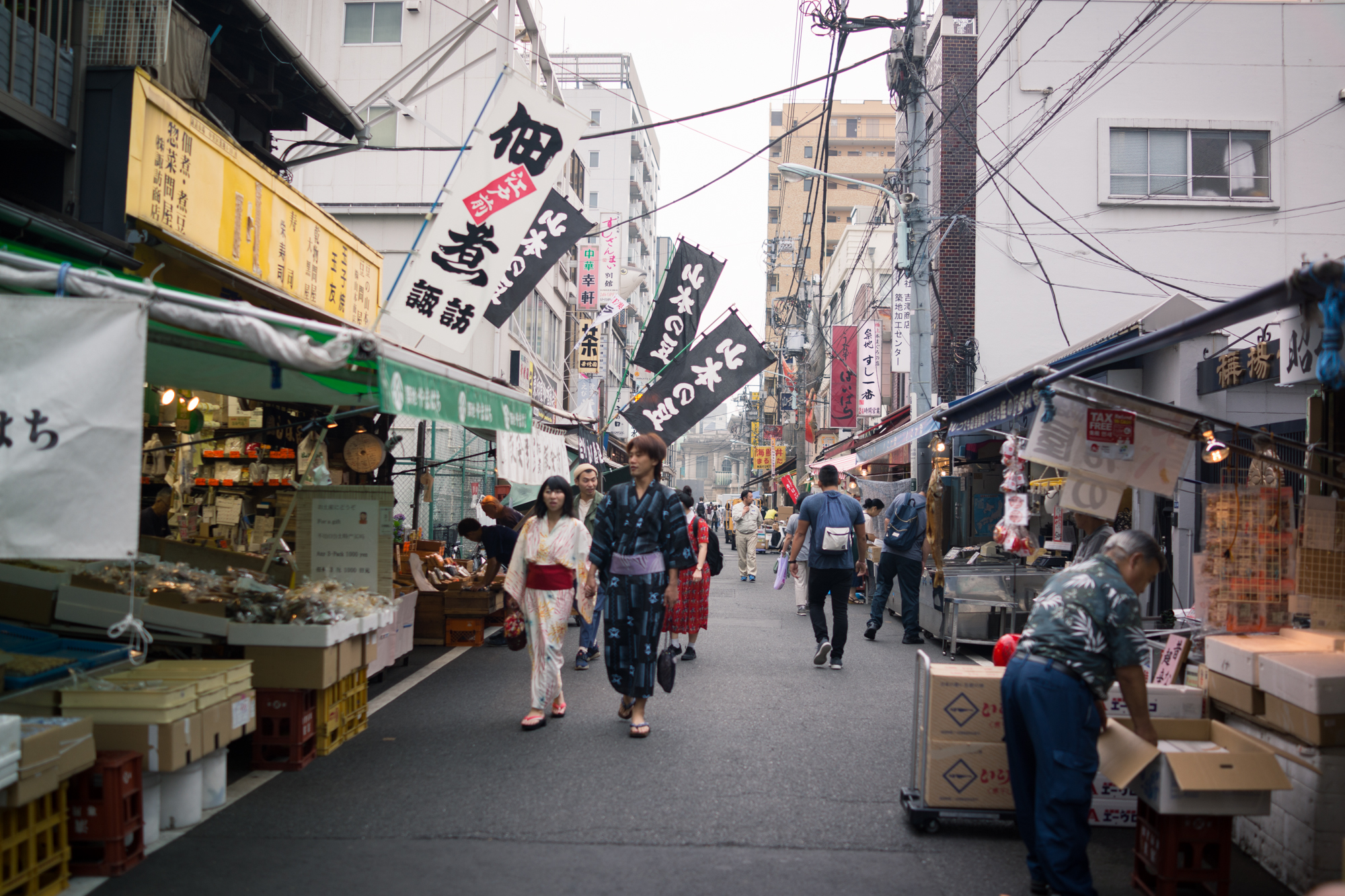 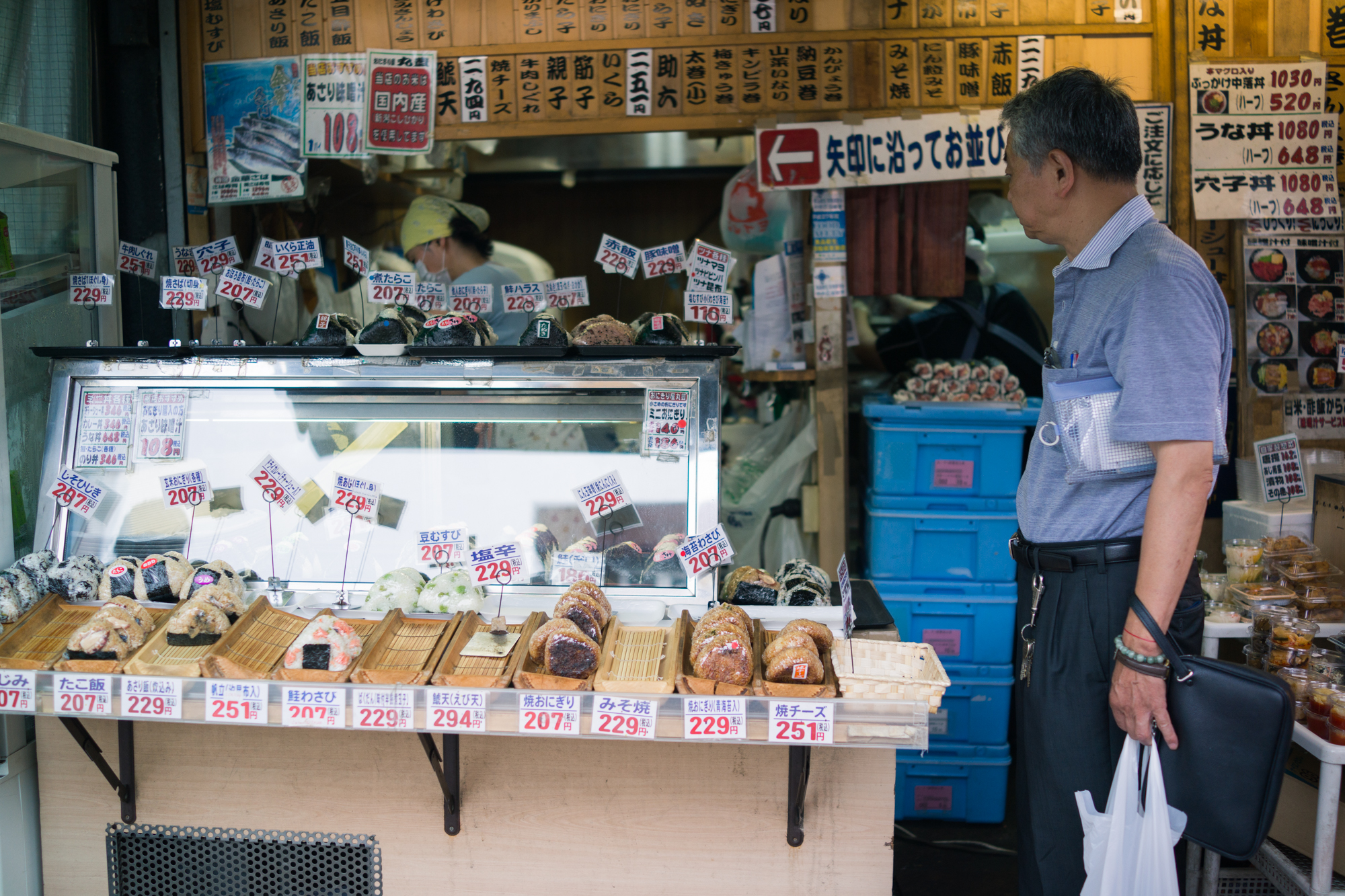 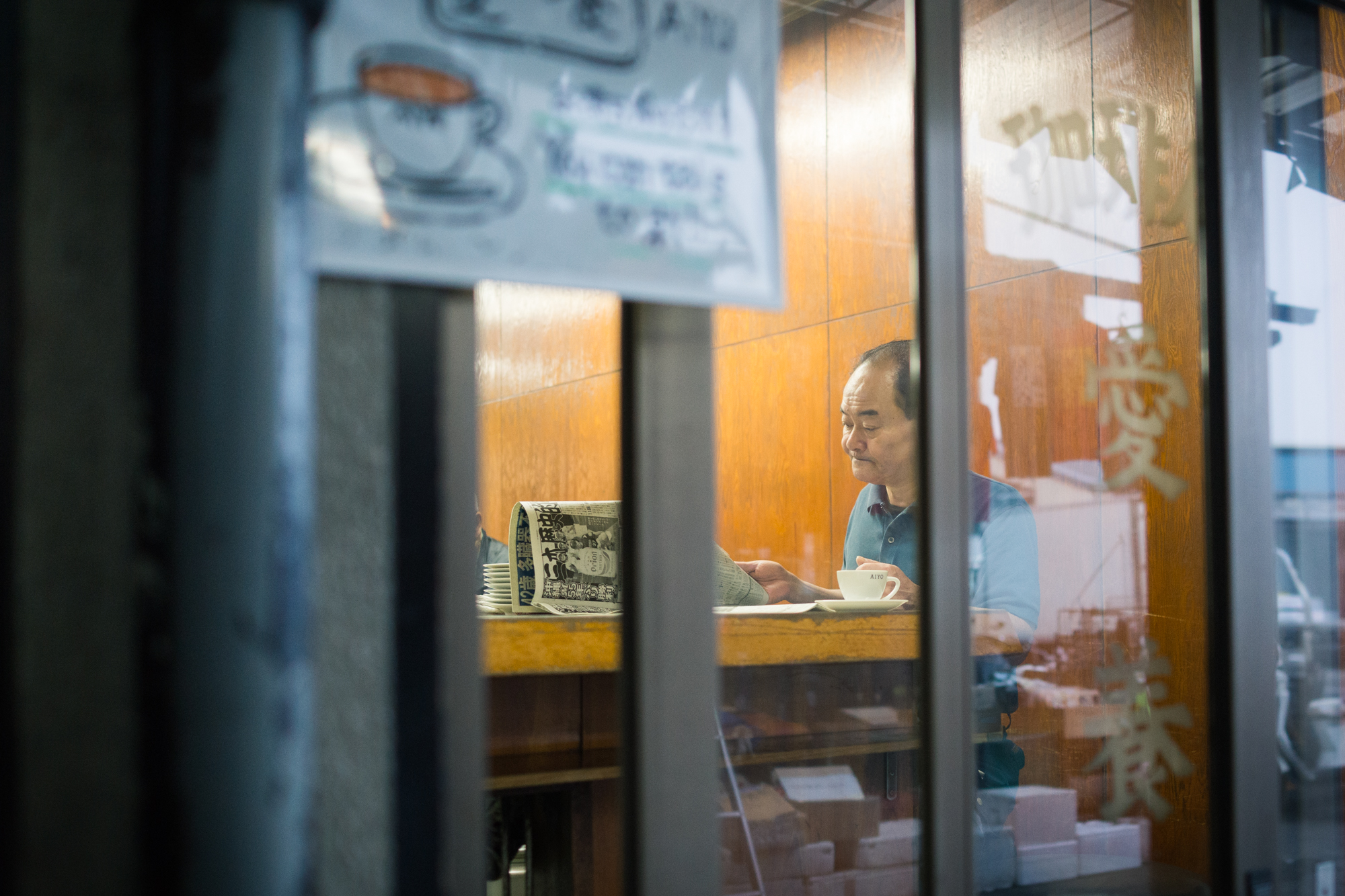 Having landed in the country in the late afternoon, we planned on going out in Ginza (an upscale shopping district located a short walk away from the market), grabbing a few drinks, then lining up by 2 am. An aggressive but worthwhile way to experience our first 24 hours in the city. 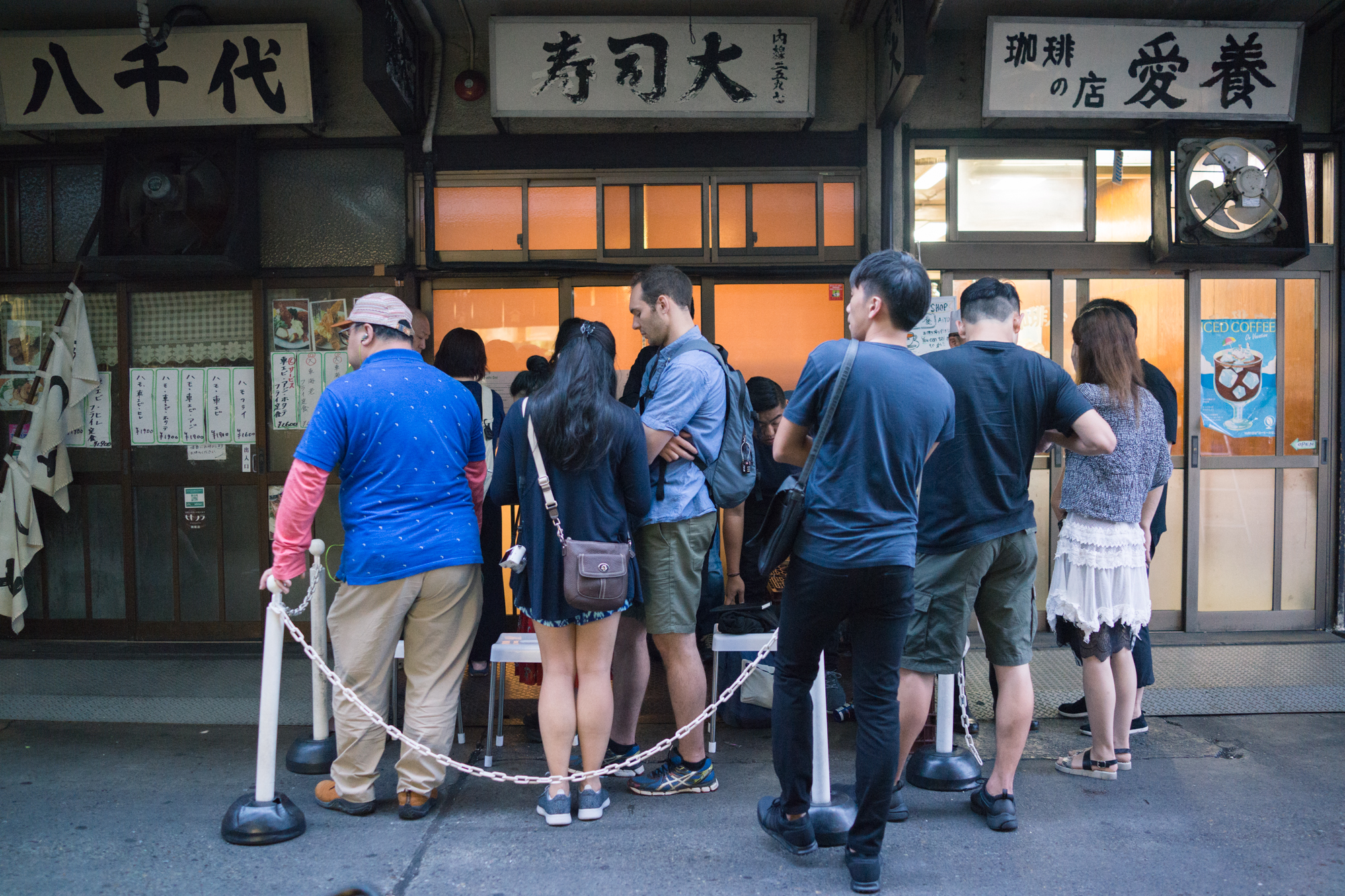 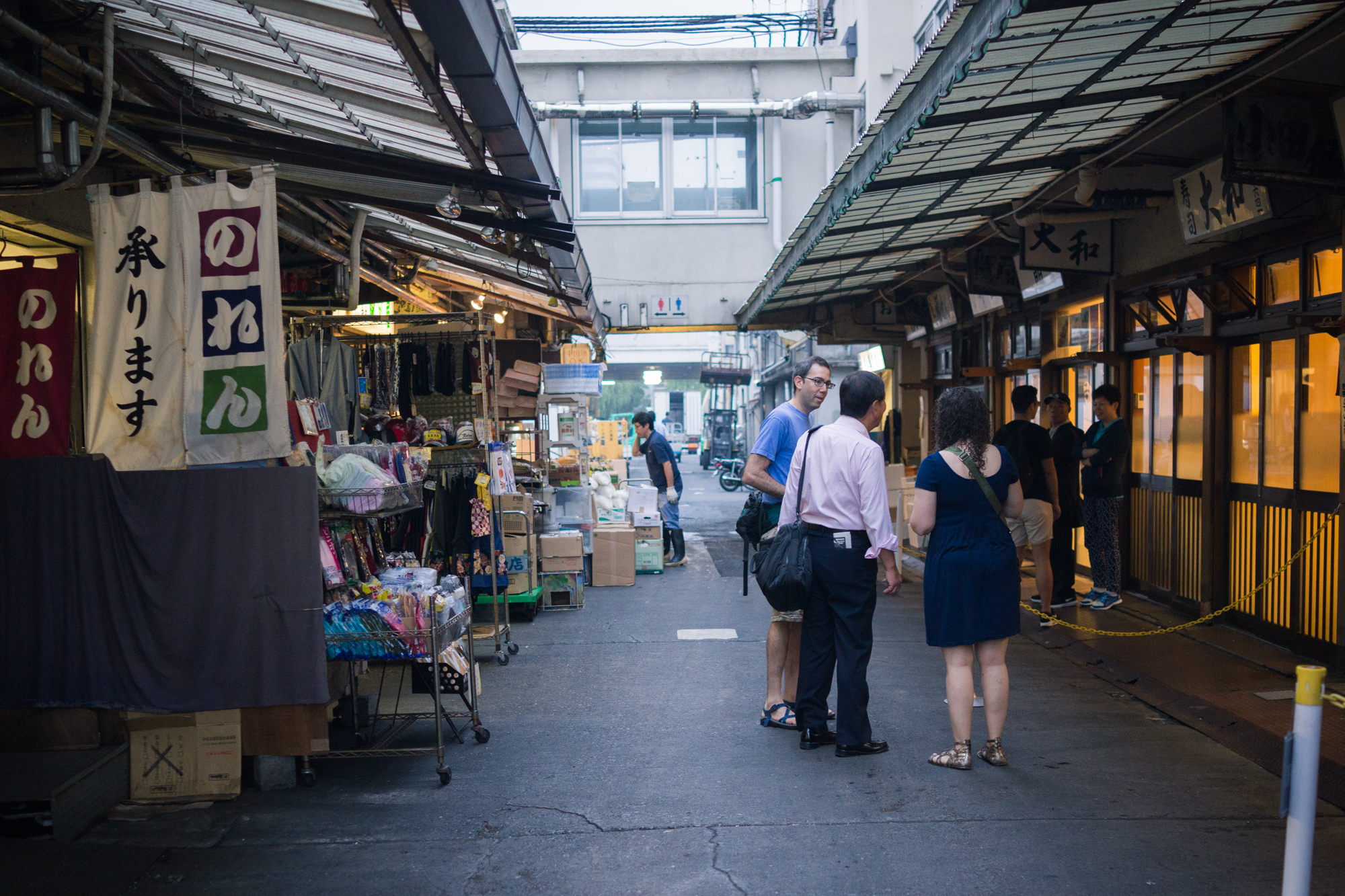 The tiny sushi bar was squeezed into a line of similar eateries, its entrance plain and unassuming, and nearly indistinguishable from its neighbors–save for the three people already lined up outside by the time we arrived.

Bleary eyed and hungry, they welcomed the first group in right at 5 am and seated us along the cramped counter space. We were served hot miso soup and roasted rice green tea, both of which I welcomed both eagerly. Joel and I each placed our order for omakase style meals (meaning “chef’s choice”) and waited to begin. 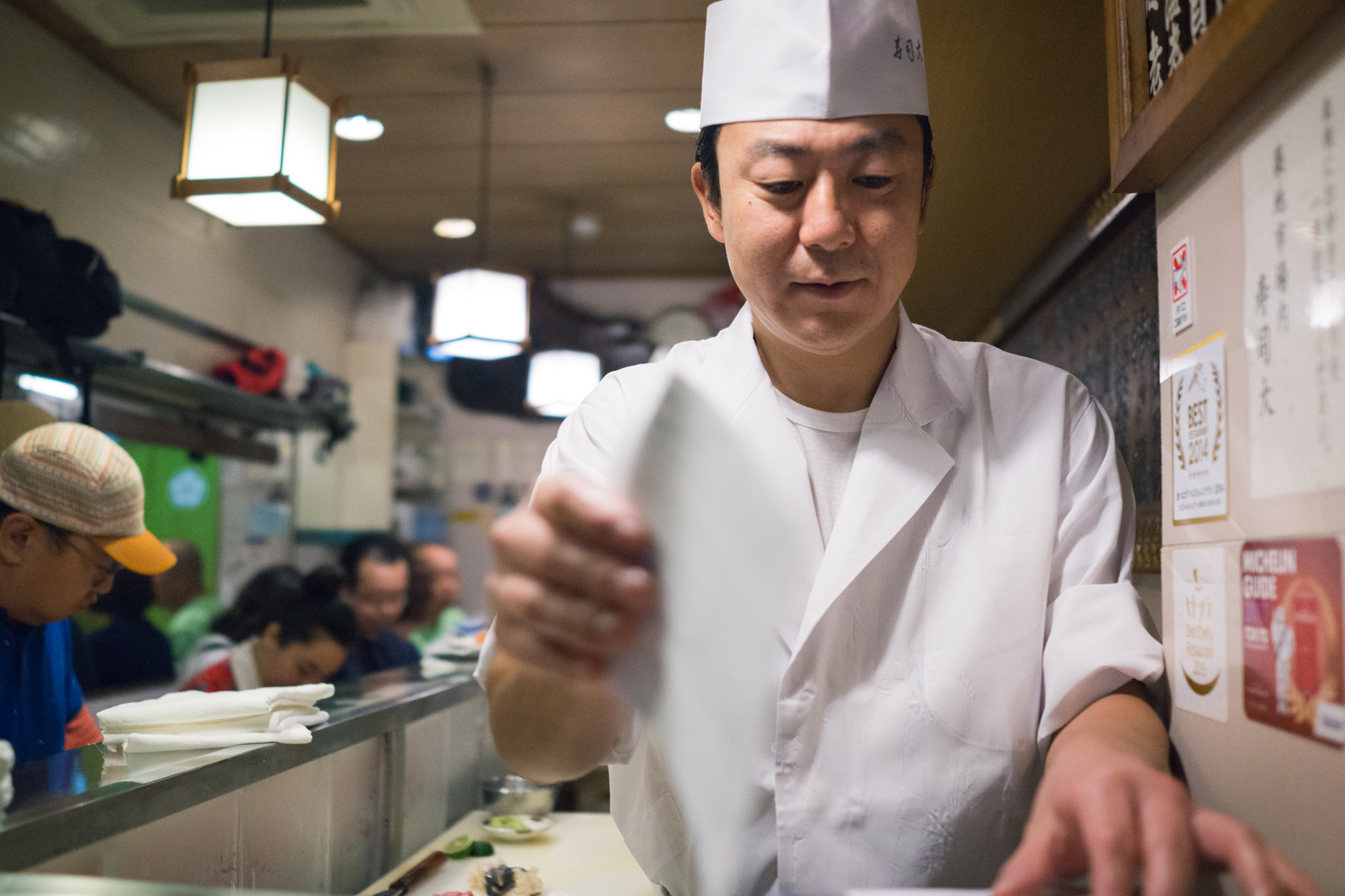 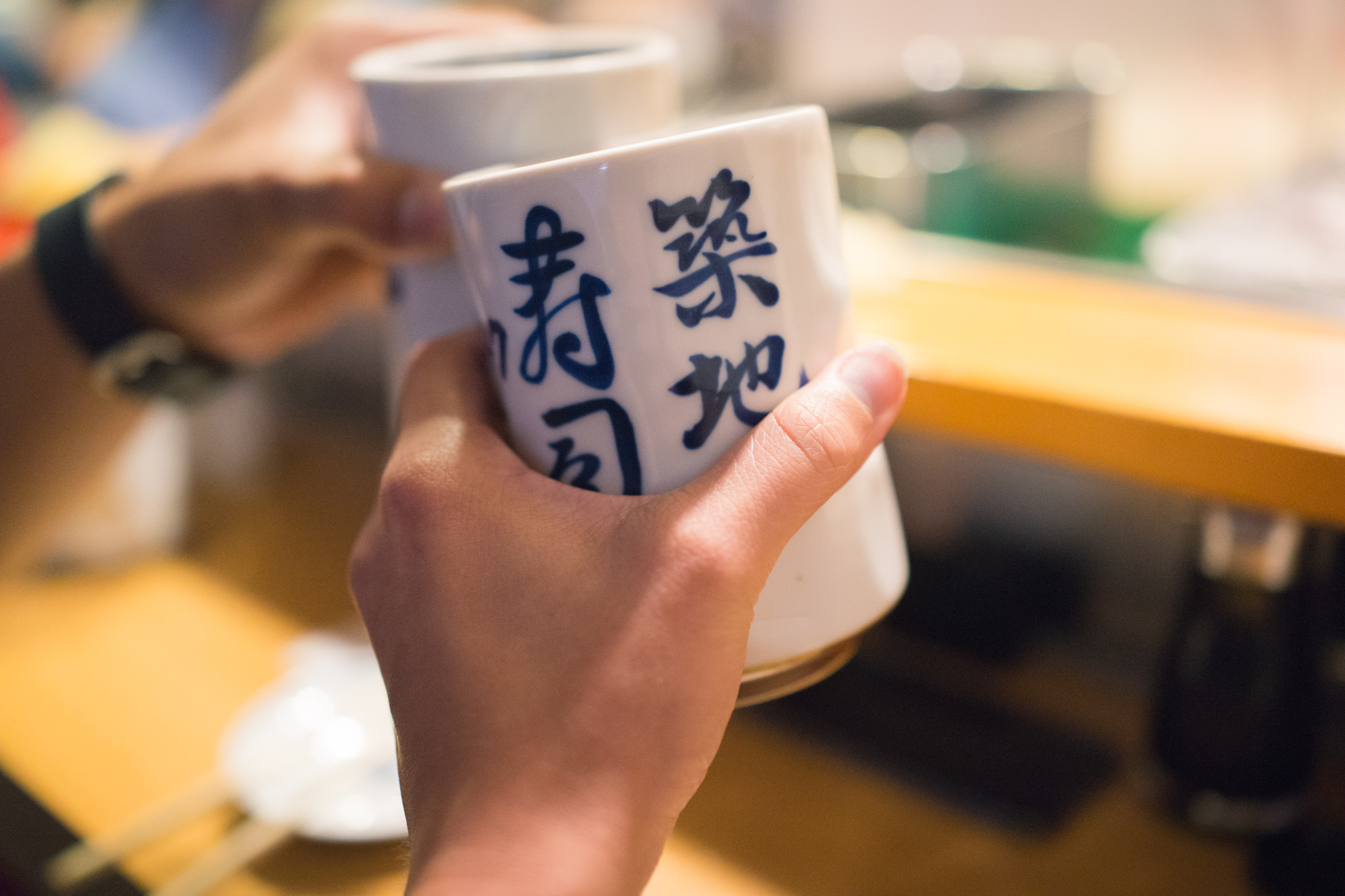 The first course was tamago, which was surprisingly eggy and meaty, rather than sugary and artificial like in the States.

Next came the first nigiri course: fatty tuna. Pink, plump, and lightly resting on loosely packed vinegar rice. Sushi, as our chef reminded us, is traditionally meant to be eaten in one bite. Every time I attempted this, however, half my piece plopped back down onto my plate in failure (much to Joel’s amusement). 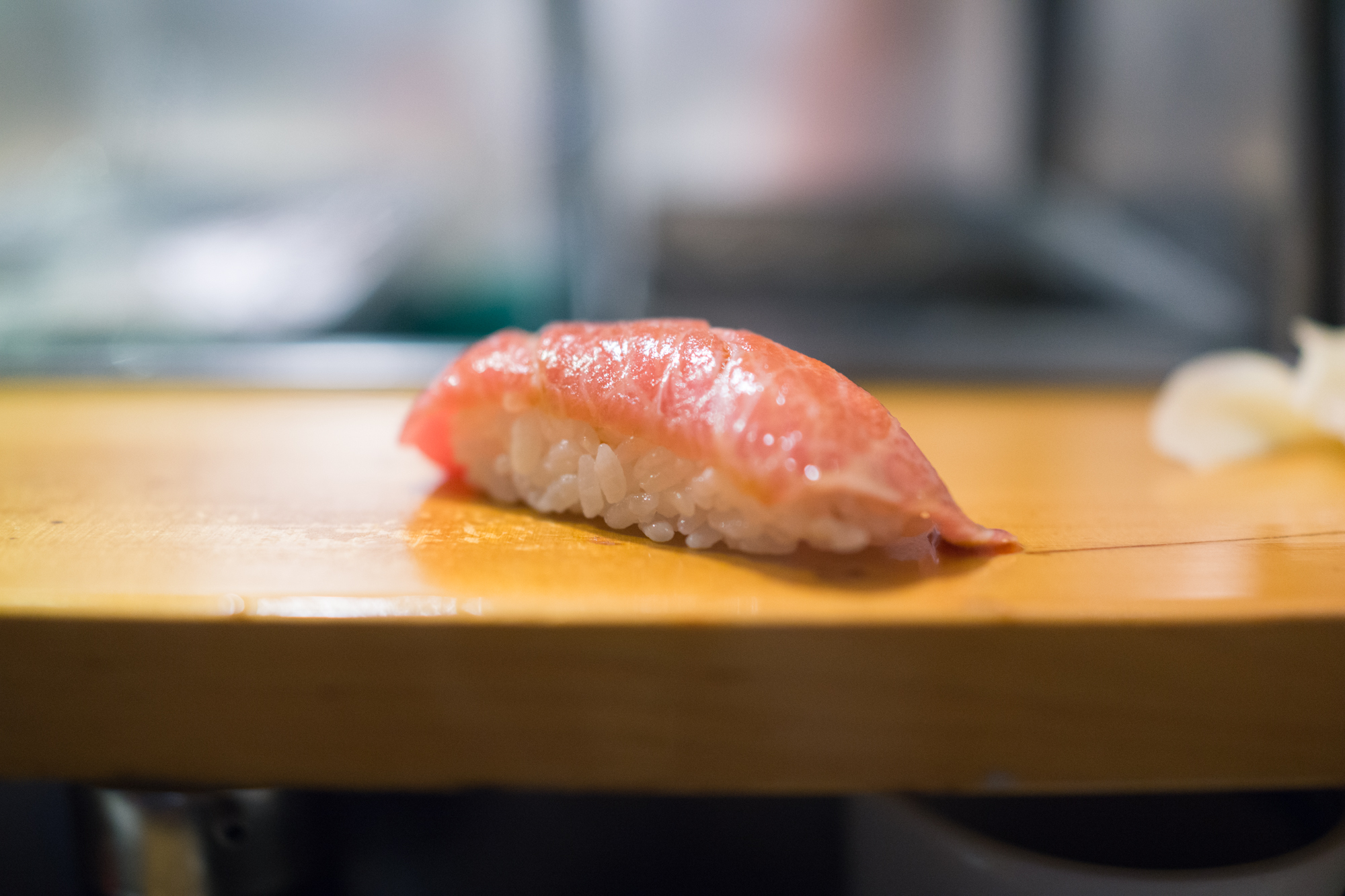 The otoro was followed by sea bream, scooped up from Tokyo Bay only hours before, and then a slice of pale-pink snapper. Then came the uni, fittingly nicknamed “butter of the sea”. Mildly sweet and intensely rich, it lacked the fishy, bitter sensations of versions I’d tasted in the past.

Afterward was horse mackerel (“my favorite!” our chef proclaimed) topped with grated ginger and shaved scallion. 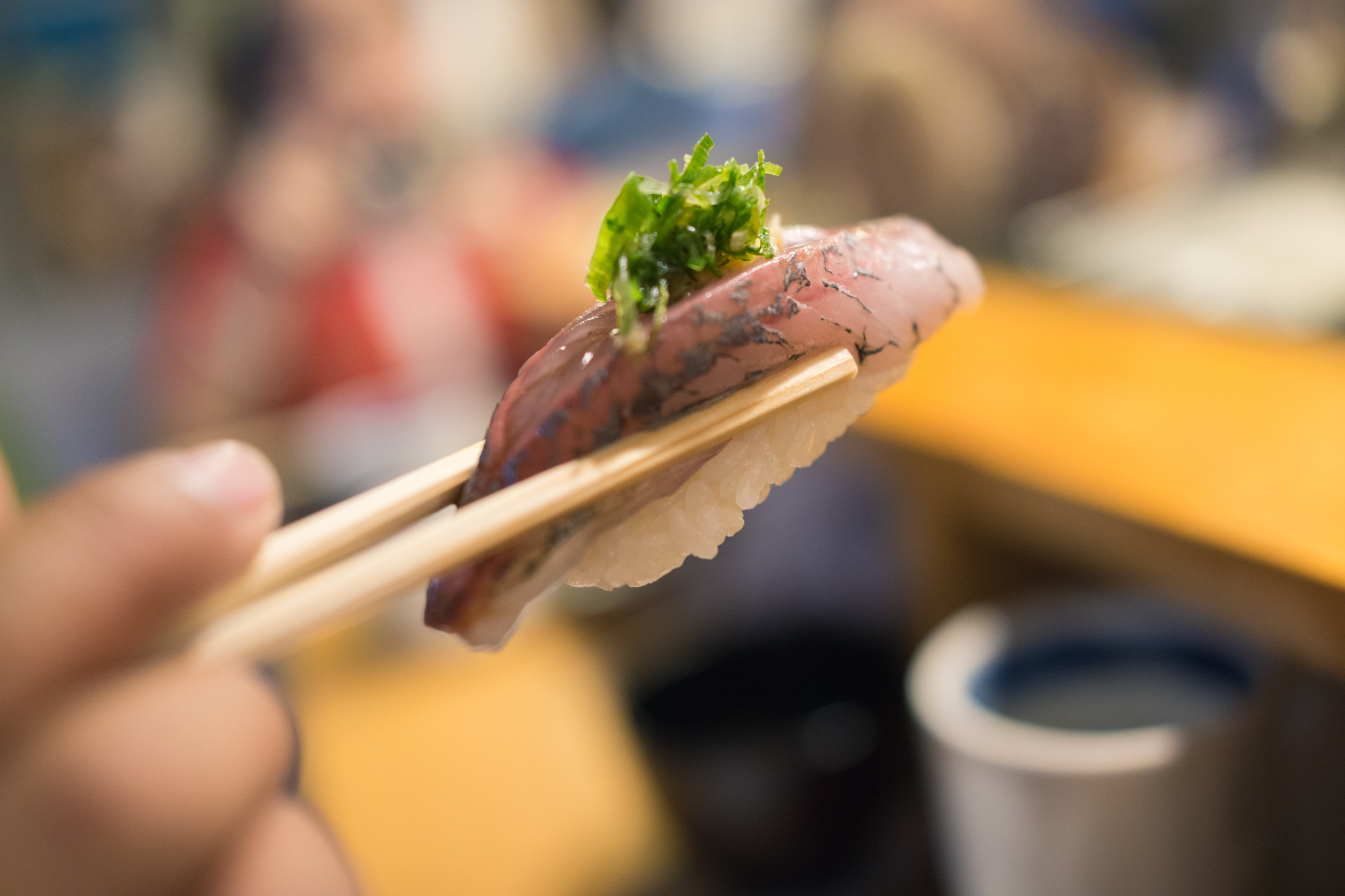 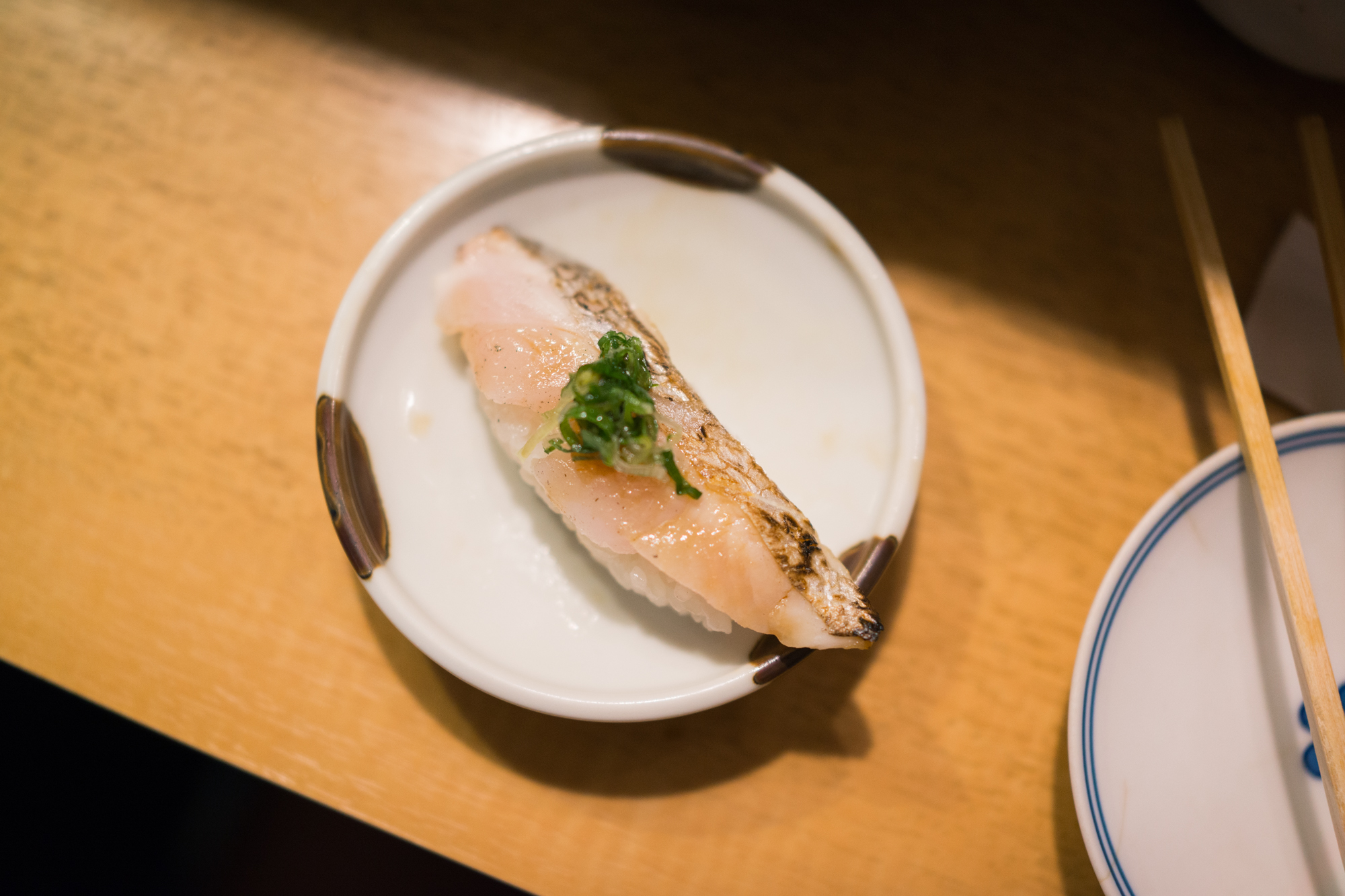 Wiggling surf clam made it onto the bar next, and mine nearly toppled over with a small jerk of its arm (do clams have arms?). Then came Joel’s favorite, smoked cuttlefish.

Before the final selection was unveiled, we were served a four piece display of tuna and salmon roe maki. When you’ve already had nine pieces of incredible nigiri rolling around in your stomach, it feels unjust to ruin the experience with a basic roll, but this was something else entirely. Rolled tightly in a crisp nori wrapper and stuffed with perilla leaf, the flavors melded together beautifully. This was the only course where the chef let us use soy sauce.

Finally, they placed a small plate of soft and tender sea eel in front of us. The creamy nigiri dissolved instantly on my tongue. This might’ve been my favorite course of the morning. 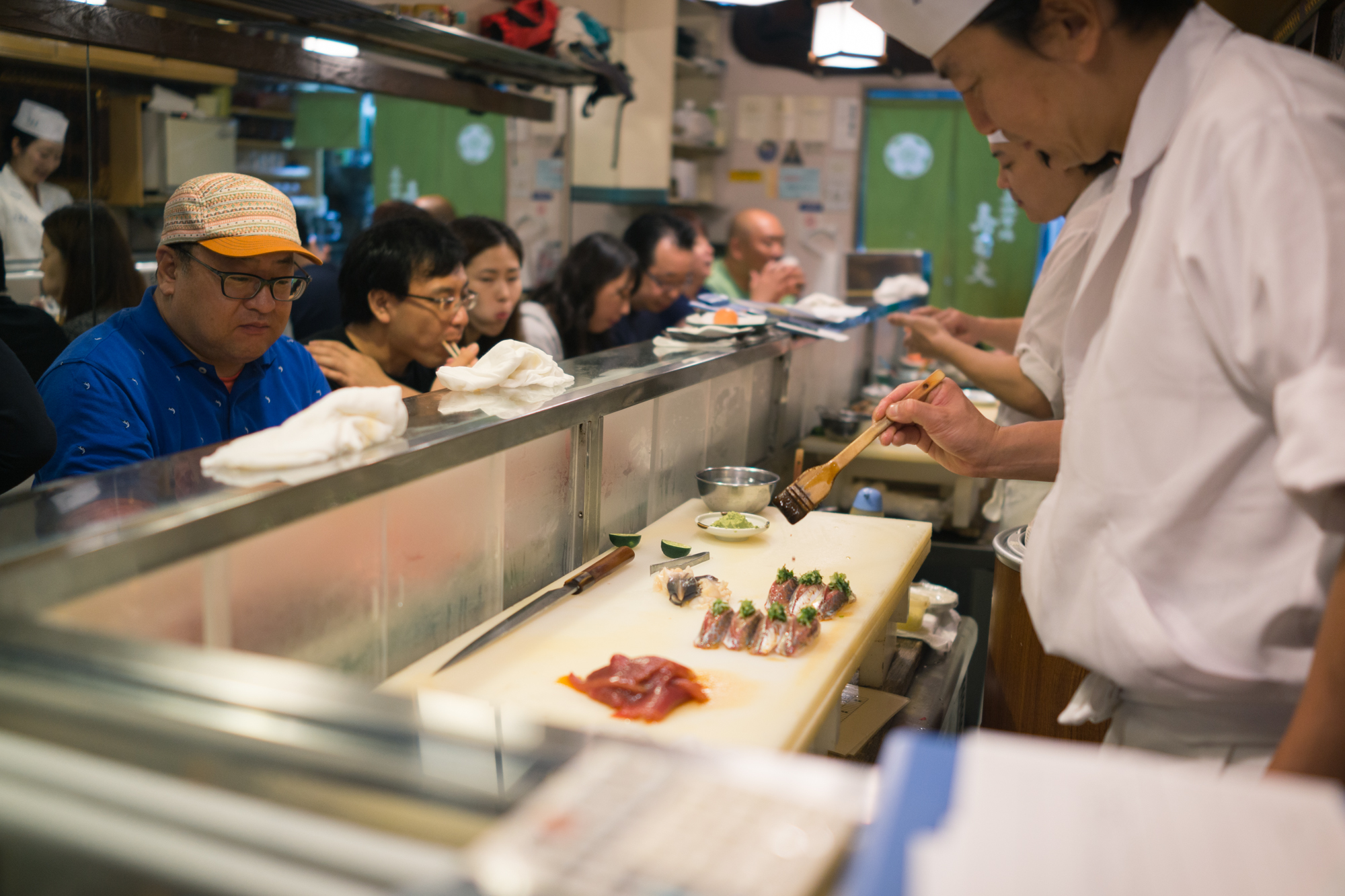 Joel and I both chose scallop for our final course (I made a daring request for sperm sac, but it wasn’t in season). It was lightly chewy and decidedly scallop-y in flavor.

The whole experience took about 45 minutes from start to finish. Both Joel and I left feeling like we had made the right choice, but whether Sushi Dai is “worth it” is up to you. If you’re looking for the best sushi in the world or even Tokyo, you’ll likely find it elsewhere. But waiting outside in the cool summer night, watching the market come to life, and sitting at a small bar with friendly chefs expertly describing each piece in each customer’s own language make it an adventure in itself. It’s also relatively inexpensive: ¥4000 for a personal and intimate omakase breakfast in the heart of one of the world’s most expensive cities.

The market was actually expected to close last November, and we felt incredibly lucky that the date was postponed to later this year. The city is hoping to move it to a bigger location in time for the 2020 Olympics. What will become of the nearly century-old market and vendors like Sushi Dai is anyone’s guess. 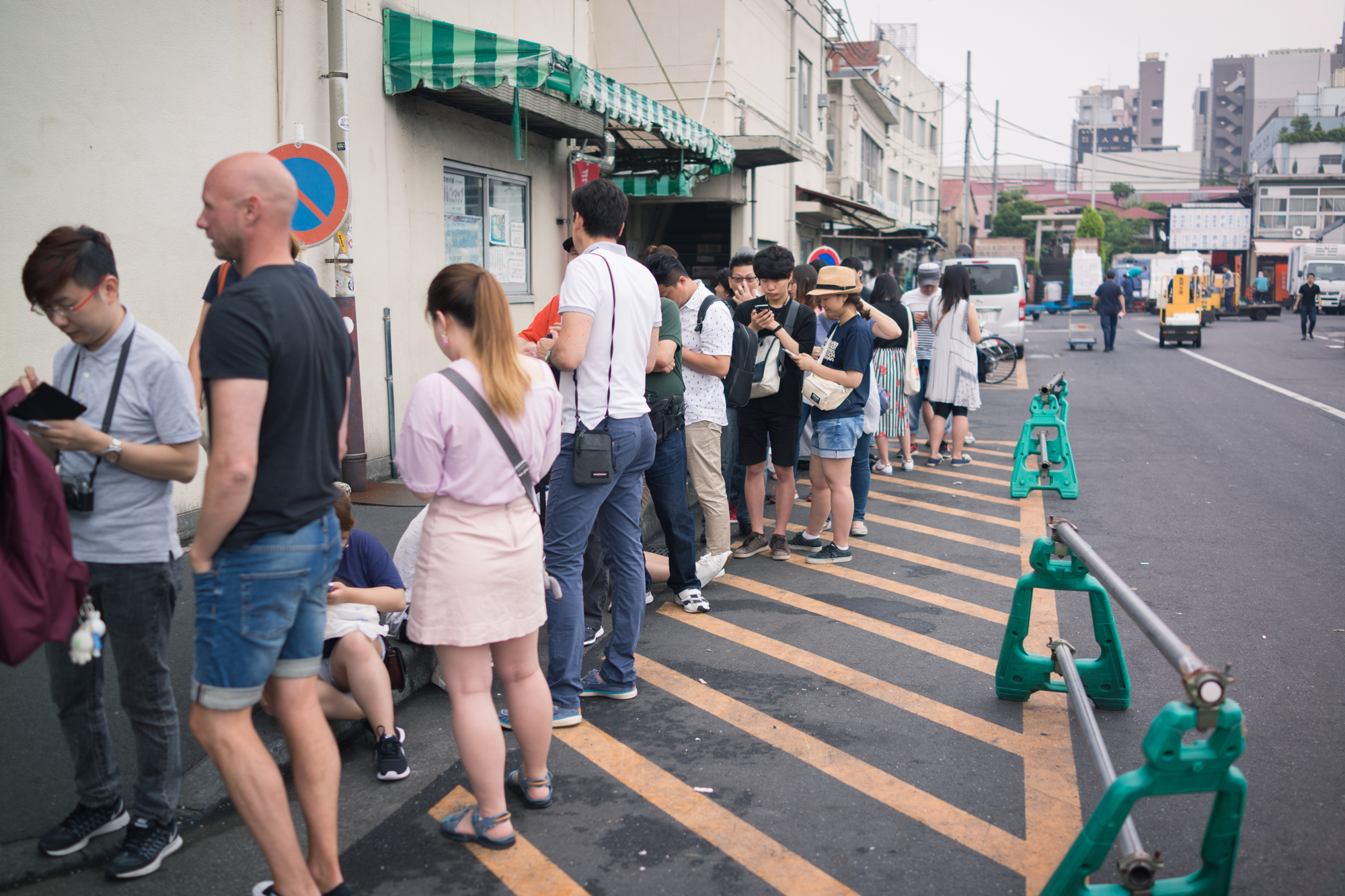 1. Get there early. The restaurant can only accommodate 13 people at once, and so if you miss the first round, you’ll be waiting an additional 45-60min for every dozen or so people in front of you. Getting a spot in the first group usually means lining up by 3-3:30 am.

2. If you sleep through your alarm and end up getting there later than expected, make sure you queue up in the right spot. They only let about ten or so people wait in front of the restaurant. The rest are lined up around the corner.

3. They close at 12 pm. Technically. But they’ll usually stop letting people in line sometime between 8-9 am.

4. Check the market calendar beforehand, because if Tsukiji itself is closed, so is Sushi Dai. This is usually on Wednesdays.

5. There’s a public restroom located across from the restaurant at the other end of the alley.

6. Ginza is walking distance from the market, so you might find it easier to stay out all night drinking rather than wake up at some ungodly hour. The area is bougie so if you’re on a budget, hit up 300 Bar, which sells most drinks and food items for ¥300 each.

7. If you’re anything like us, you’ll arrive at Tsukiji utterly lost and confused. There are several short rows of restaurants arranged one after another and Google Maps actually does a pretty great job at identifying exactly which one it is. When you find the correct alleyway, it will be the third storefront (to the left of the coffee shop with a giant fan on the wall) if you’re entering from the main street.

8. Like pretty much everything else in Japan, it’s 現金のみ (cash only).

9. Don’t feel like you have to come here for great sushi. There are plenty of other shops in Tsukiji that serve equally wonderful food and for much less of a hassle. But are you really going to come all the way to Japan just to take the easy way out?