September was another month of crazy highs and disappointing lows. We started off flying out from Shanghai to the capital of the Sichuan province, Chengdu. This was a pretty big turning point in how I viewed China; while I never hated the place like many people do, I also didn’t expect the locals to be particularly welcoming. Exploring the country outside of the big cities showed me a different side of the country. People were actually interested in interacting with us, and we even had one instance in Guilin where a random girl sat down with us at a noodle shop and spent the entire meal in conversation! It became pretty clear that China really isn’t any different than any other country in the world—travel outside of the main metropolitan areas and people will warm up to you much quicker.

We also spent some time in Hong Kong, although we were working around both a limited timeline and finding a way to fix my camera (more on that below). Taiwan was a little more relaxed. We had two full weeks to explore the place and spent most of it eating (I regret nothing).

Overall, it was a very, very busy month. Most people work a typical 9-to-5 and only get two weeks off a year, so it’s understandable that the idea of “travel” is often equated with a relaxing vacation. But when you’re simultaneously booking flights, planning itineraries, tracking budgets, updating a blog, editing photos, and trying to find the time to still practice art and read books (and—gasp!—relax), while keeping in touch with old friends and socializing with new ones, time starts to feel a little sparse. Oh, and not to mention, remembering to slow down and take in all of the new experiences you’re having every day.

Don’t get me wrong, I’m not complaining. I feel busier than I ever have in my life and I love it. When there’s so much going on all the time it forces you to prioritize and only spend time on the things that matter to you. It’s a blessing, really. 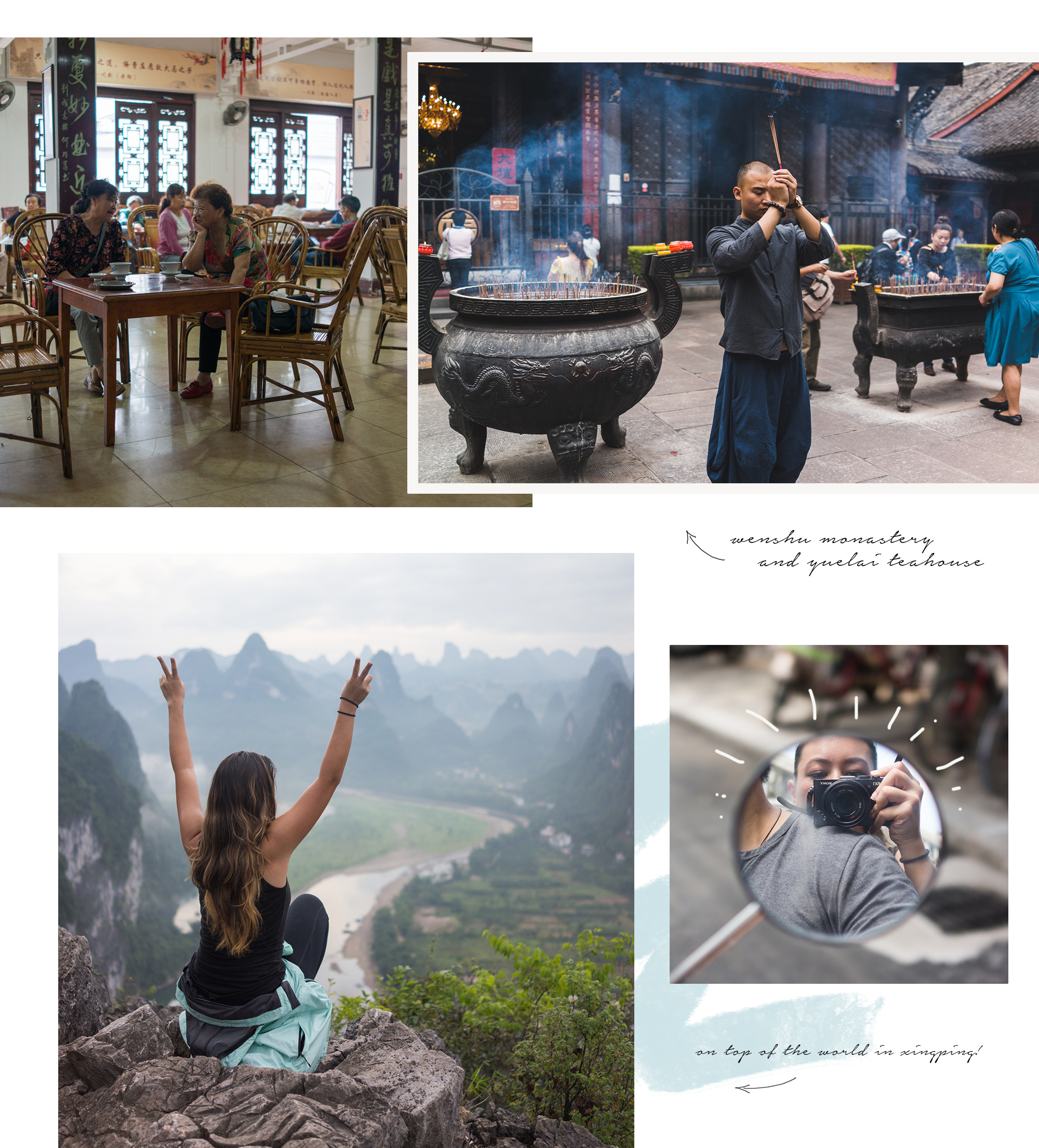 Visiting the Panda Center in Chengdu: Because how could this not be a top moment? Chengdu is famous for being one of (if not the) best place in the world to see giant pandas. They opened back in the 1980’s and have been diligently working to reverse the animal’s dwindling numbers in the wild. The best part was getting to see the infants!

Wenshu Monastery & Yuelai Teahouse: We popped in for a visit at Wenshu Monastery one morning and were pleasantly surprised. It was completely free and filled with people going about their daily tasks, worshipping around the various structures, and felt so much more authentic than your typical temple attraction. Wenshu also has a vegetarian buffet (filled primarily with monks and grandmas), which was a great introduction to all the various dishes that Chinese cuisine has to offer, even when you take meat out of the equation. We spent the afternoon at Yuelai Teahouse, hoping to catch a showing of their Sichuan opera performance (we went on the wrong day, boo), but ended up having a great time just relaxing and drinking tea in a room filled with chatty locals. It was just one of those days where I felt like I was truly getting in touch with the local culture.

Renting a scooter in Yangshuo: This was our first time renting a scooter abroad and it was EPIC. Yangshuo was a perfect place to learn, and we spent an afternoon exploring the Guangxi countryside at our own pace. We had such a great time that we decided to do it again in Taiwan.

Watching the sunrise in Xingping: After spending a day zipping around Yangshuo, we slept over in the sleepy village of Xingping, rising at 5:00 am the next day to catch the sunrise on top of Laozhai Hill. It was incredible. We had a clear view of the Li River from high above, snaking around the mountains, and the towns slowly waking up below us. It’s a sight that’s going to stay with me for the rest of my life.

Unexpected hospitality in Tai O: Following a long, arduous hike up Lantau Peak, we decided to check out the nearby Tai O fishing village. Upon arriving, we noticed a café across the water, and wanted to give it a look. Fast forward one hour later and we’re beyond frustrated (and hangry), weaving through alleys in a tiny village, desperately trying to find this evasive restaurant. When we finally did arrive, we were disappointed to find that the menu was mostly pizza and sweets (all of which were out of budget). The owner came out to take our order. We tried to leave as graciously as possible, but she just wouldn’t let us. She ended up bringing us two lemonades, a slice of tiramisu cake, and a pot of lavender tea, all on the house. And it was for no other reason than the fact that she herself had struggled with affording food in the past and wanted to pass on the kindness that the world had once shown her. How freaking beautiful is that?

Bouldering in Hualien: I already touched on this in my Taiwan post, but the nature in Hualien was incredible. Skipping around rocks in the world’s largest marble gorge and climbing up hidden waterfalls was a definite highlight of our time on the island.

Getting our cards back: Sometimes, the most mundane things in life can bring us the most joy. After losing our wallet (the first time), it was a long and cumbersome process to recover the replacements credit/debit cards. We did have backups, thank god, but none of them came fee-free. We ended up spending quite a bit of cash on ATM charges and credit card fees. It took about six weeks of juggling various logistical nightmares, but we finally got them back! YEEESSSS. 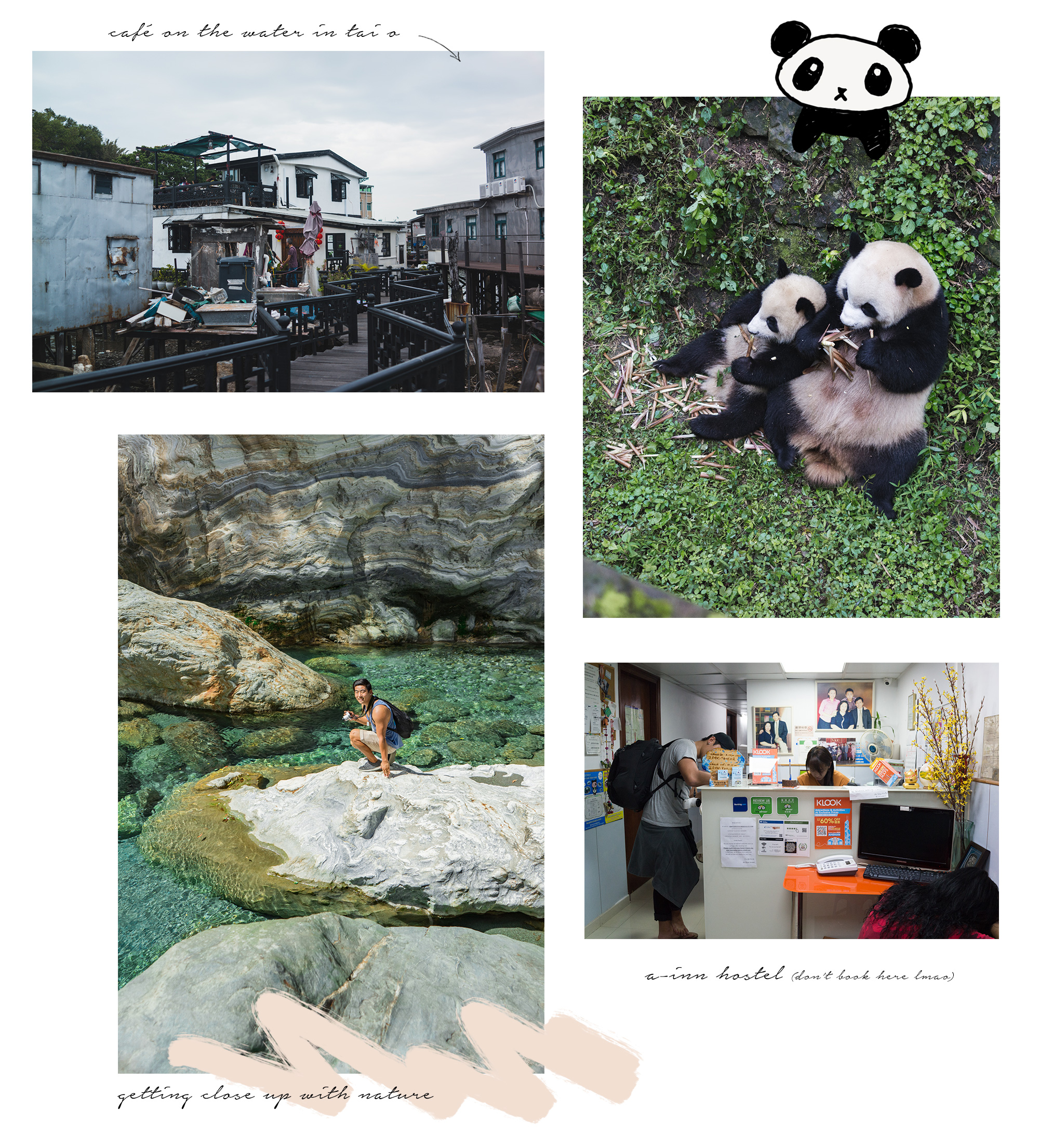 A-Inn Hostel in Hong Kong: This was one of the few times where being cheap came back to bite us (literally). Our hostel in Hong Kong had bed bugs, crap wi-fi, and the power went out completely on our last night in the city. Gr8.

RIP to my RX-1: My little beast of a camera finally died on me. It was having focus motor issues for the last few months (lesson learned, never buy a Sony camera used) and it got to the point where it was damn near unusable. I loved this camera, and so it was a pretty devastating moment for me when I decided to ship it back home and find a cheaper replacement. We spent a lot of our time in Hong Kong running around the local Sony stores and trying to find a fix, but it was useless. I ended up with a new Sony A7 by the time we left. It’s by no means a bad camera, but the image quality can’t hold a candle to the RX-1. 🙁

Losing our wallet and Joel’s passport: Ugh. Just ugh. This was a really expensive loss for us, and replacing a passport is just the worst.

The worst sinus headache of all time: When I was little, I remember my dad would constant complaining about sinus headaches. I never understood what the big fuss was about until one night in Lijiang when my head started pounding like crazy. I had been sick with a cold all day and felt this building pressure in my sinuses, then woke up around 3:00 am with one of the worst pains of my life. It was like having one of my usual migraines with a baby elephant sitting on top of my face.

Baozi in Hualien: This was hands-down the best bao/dumpling I’ve ever tasted. These little guys are going to haunt my dreams forever.

Yong Kang Beef Noodles: Expensive by Taiwanese standards, but worth it. I didn’t really “get” what made the beef noodle soup better in Taiwan than California until I tried this place.

Youtiao and soy milk: I had this several times for breakfast in China, Hong Kong, and Taiwan, and every time it was amazing. There’s just something so comforting and delicious about a fried breadstick and fresh soymilk in the morning.

Cheese takoyaki: Fresh octopus, pancake batter, and melted cheese all wrapped up into a bite-sized ball. Don’t miss this if you visit the night markets in Taiwan!

Tim Ho Wan: It’s dim sum and it’s Michelin rated, how could it not make this list? Joel and I were huge fans of the BBQ pork buns in particular. We even came back a second time before leaving!

Linguini Fini happy hour: AYCE/D specials usually aim for quantity over quality. At the Linguini Fini location in Hong Kong, you get both! For just $100 HKD we had access to unlimited tomato garlic wings and seasoned French fries for two hours, all washed down with bottomless beers. And everything was so, so tasty.

Guilin rice noodles: We first tried this Guilin specialty in Yangshuo, and it was okay. Nothing worth raving about by any means. Our second taste was right outside the North Guilin train station and it was leagues better (and cheaper!). We loved it so much that we stopped by again for breakfast before catching the train to Shenzhen.

American breakfast in Xingping: I usually stay far away from American food when I visit other countries, but I was feeling a little hungry for home one morning. The breakfast option at our hostel was cheap and included a beautiful spread of eggs, bacon, toast, fruit, OJ, and coffee. I sat out on the porch and enjoyed my blasphemous meal while watching the world go by. It was wonderful.

We’re off to Southeast Asia for the first time! We’ll spend a little less than a month traveling around Vietnam, then head to Thailand for a few weeks, where we’ll catch up with some friends who are also visiting around that time. Our final stop in Asia will be Myanmar/Burma to explore Bagan’s famous temples. Depending on when the timing of our flights work out, we’ll end up in Turkey either at the end of November or beginning of December. If you have any recommendations for these destinations, don’t hesitate to share in the comments below! And be sure to subscribe for updates.