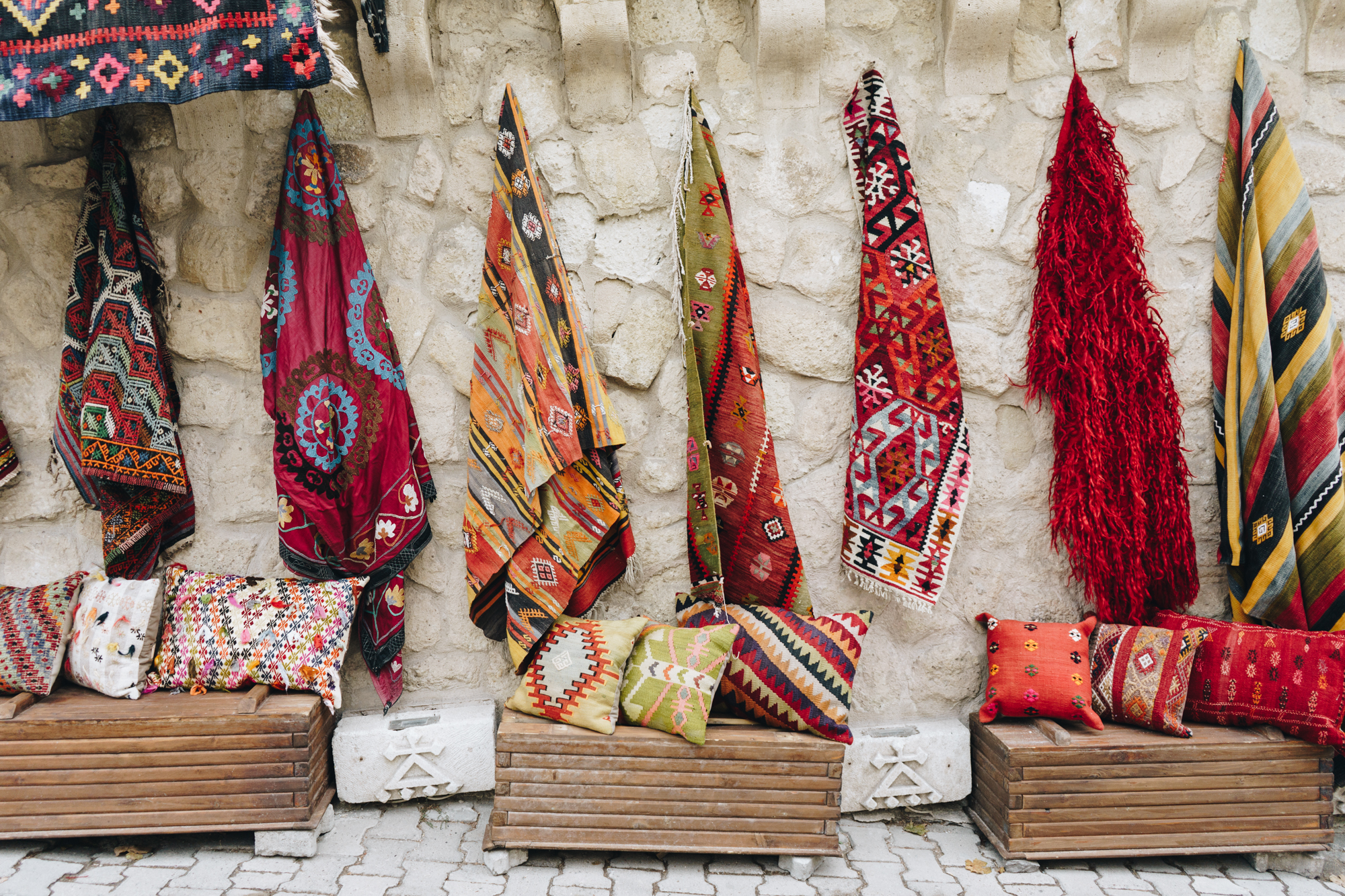 After a full 24-hours of flights and layovers, we finally arrive in Istanbul. There’s a distinct chill in the air and I realize that I’m underdressed for the occasion. A crisp wind sweeps by and I decide that our first order of business will have to be a trip to Istiklal, the city’s bustling shopping street just blocks down from our hostel.

The neighborhood we’re in feels distinctly European, with sandstone buildings towering over us and pedestrians dressed in fashionable coats, strutting by on their way to work. Istanbul is a literal melting pot of East and West; it straddles the Bosphorus over two continents, and is one of the reasons why so many ancient empires (from Byzantine to Ottoman) once claimed home here. The city’s unique geography and deep history combine to create a palpable, buzzing, electric energy that Joel and I immediately fall in love with.

A Portrait of Turkey

1. The cats of Istanbul are fat.

Having just stepped off the plane from Myanmar, where the cats are skinny and look on the brink of death, this was a mini-culture shock on its own. The locals are fervent cat lovers and feel a sense of communal responsibility for taking care of and feeding all the cats around the city. You’ll see little dishes out on the street and people walking around with small bags of cat food for strays.

Istanbul has dealt with an enormous stray animal issue for over a century now. The government once attempted to corral every stray dog in the city and dump them onto the Princes’ Islands (a handful of islands located close by), which not only angered a lot of locals, but also did little to combat the problem. As of today, there’s still estimated to be around 150,000 stray dogs left. Even when the dog population became overwhelming (and dangerous, because, #disease), the locals refused to euthanize them. Instead, shelters volunteered to vaccinate and spay-neuter each individual animal. It’s still an ongoing process. But they tag every “fixed” dog with a colorful ear tag so people know that they’re safe to approach.

I have no idea why or where this came from, especially considering that geographically, Turkey is nowhere near either Spain or South America. But love it they do. Unlike in most other European countries, it’s even more common to hear Spanish songs than American ones.

Anyone who says that the French or Italians love carbs the most has never met a Turkish man. Every restaurant we sat down in served us free baskets of bread alongside the meal. I’m talking piles of the stuff. We would sit down to eat a plate of doner and rice and get handed a dozen rolls on the side. Or we’d be ordering a sandwich for takeout and watch the cook pile in baguette slices in our bag (THERE’S BREAD IN THE SANDWICH). Bread bread bread bread bread bread bread bread. Okay I’m done.

5. Their are incredibly spicy

While we’re on the topic of food, let’s discuss Turkish . They look and smell and even taste like the ones you might find at say, In-N-Out on a late Friday night, but exercise some caution because some of these will tear your tongue out. They’re incredibly spicy. (Sidenote: If anyone’s visiting Turkey soon, please bring me back a jar of . And Turkish delight. And baklava. Omg, baklava. .)

6. All of the Ubers here are limos.

Not the stretchy, fancy kind, but the type where you enter into a small room with two seat benches facing each other. And they’re ridiculously cheap by European or American standards. We only took a handful of these, so maybe my sample size is too small to make larger judgments, but they really seemed to be the only option if you were ordering through Uber. My guess is that since the taxis are cheaper here, most locals who take Uber only do so for a “nice” ride. There isn’t much demand for your everyday Prius, I suppose.

7. You are everyone’s friend.

I made a lot of friends in Turkey. I say this because just about everyone, from our hostel receptionist to spice market shop-keepers, greeted me as “my friend”. I originally thought that this might have to do with either 1.) famed Turkish hospitality or 2.) a quirky translation of a greeting in their own language, but I asked a woman about it in Cappadocia, and she said that it was something they only said to tourists. She then mentioned that foreigners tend to greet them in a similar way. Huh? I don’t know who these people are but if anyone has any more knowledge on the subject please leave a comment because I’m honestly still so confused.

8. The locals are impatient.

Turkish people remind me a lot of the stereotypical New Yorker that I’ve never actually encountered in . And by I mean that they’re the most impatient group of people I’ve ever seen. Joel and I had booked a budget airline (Pegasus) to take us from Istanbul to Cappadocia, and as is a budget airline’s favorite game to play, they continuously delayed the flight in 15 minutes increments. I stopped getting mad about this years ago after my first Ryanair flight when I was fuming the check-in desk to print my boarding pass, only to realize later that it was printed clearly in the terms of my ticket, and thereafter began silently judging all of the internet trolls who like to rate these kinds of companies 1 star because they wouldn’t let them carry on 6 duty-free bags or took-off 30 minutes late or charged them for water. It really is all right there in the fine print (actually, in the normal sized print), and it makes zero sense to me when people expect 1st class service from an airline who’s ticket they bought for dirt cheap.

Fast forward to Istanbul Airport where we’ve already been delayed for 45 minutes and everyone’s now standing in line to board, but the air attendants are still keeping us waiting indefinitely. Again, this doesn’t bother me because getting to Gerome at 8 pm vs 7 pm literally makes no difference in my life but apparently some guy is really, really angry that he’s going to miss karaoke night, AGAIN (yes I’m making this up because I don’t speak Turkish) and starts yelling at the gate attendants, who are all about as bored by his antics as somebody waiting for a Petri dish to change colors. Then another gentleman joins in, and another, and once the tarmac shuttle arrives not 20 minutes later I’m just really glad that I’m not sitting next to any of these people.

The Turkish government had some weird beef with booking.com and as a strange and confusing retaliation, you can’t book Turkish hotels while in Turkey, but you can book hotels outside of the country, and your only way to book a Turkish hotel on the site is to be accessing the site from outside the country (Follow? Me neither.) So if you’re planning a trip to Turkey anytime soon, make sure to book everything ahead of time. Or just use another website. Or a VPN. Or something.

10. The city of Istanbul has its own logo (and it’s actually really clever and well-designed).

It incorporates the mosques that are seen dotting every neighborhood of the city. Turkish designers, I appreciate you.

Have you ever visited Turkey? What did you think? Let me know in the comments below!