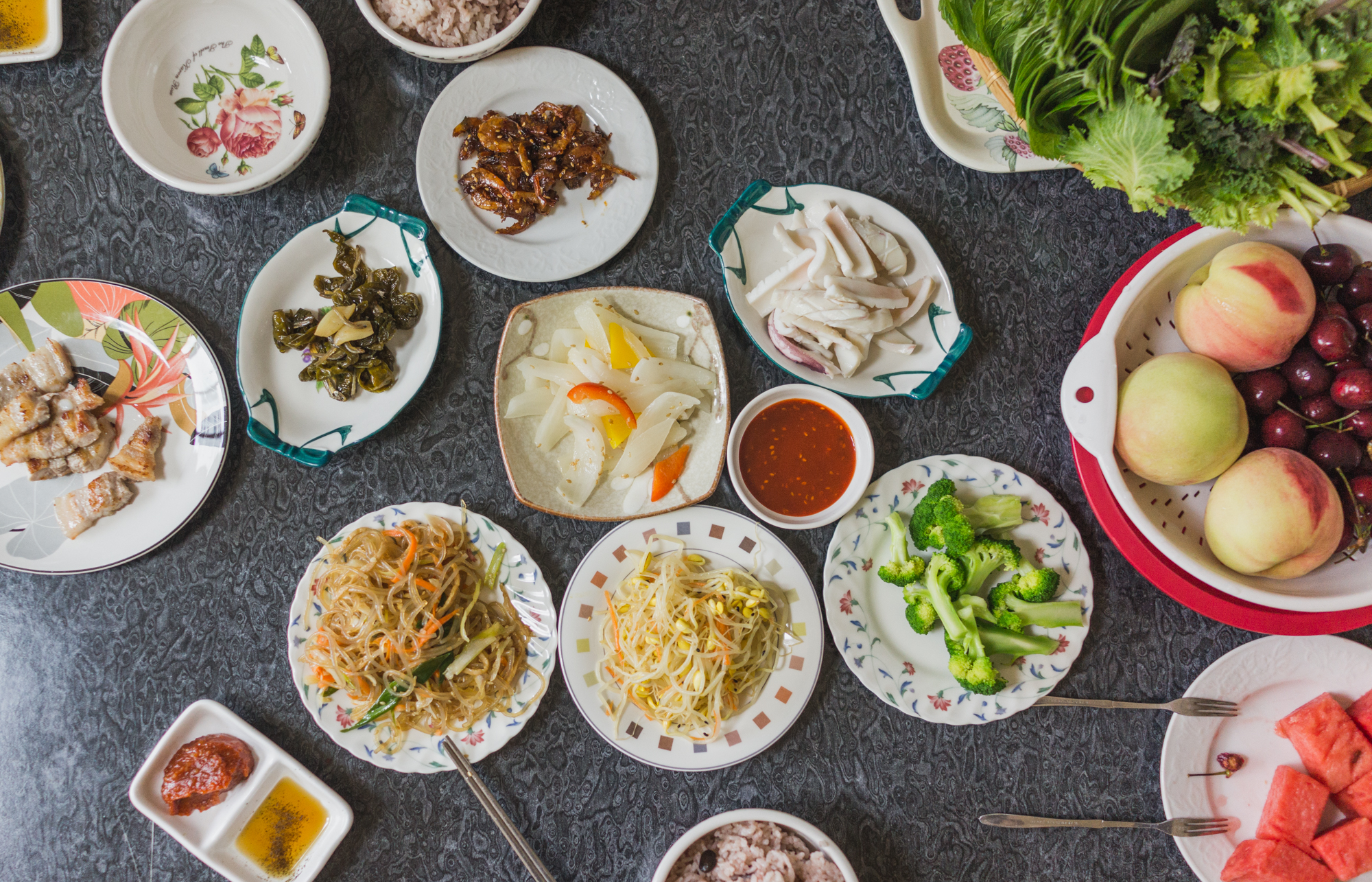 
안녕하세요 from the KAL lounge in Gimpo Airport!

Joel and I have spent the last two weeks wandering (and eating) around the streets of Seoul. So far we’ve managed to fit in a trip to Hwaseong Fortress, a day at Lotte World, dancing at Asia’s #1 club, a few 1am shopping trips, and a healthy number of visits to local cafés.

Now we’re off to Jeju Island for some hiking and to burn off all the soju and KBBQ that’s been slowly padding my waistline (is #YOLO too 2012 to say anymore?).

1. Koreans have this thing about showing you their entire menu (pictures included) on the outside of restaurants. This isn’t as awesome as it sounds because they also have a thing about not showing you the prices. So yeah, you might see a *drool* worthy photo of tteokbokki peeling off that hole-in-the-wall joint’s front window, but you won’t know how steep it runs until you step inside. 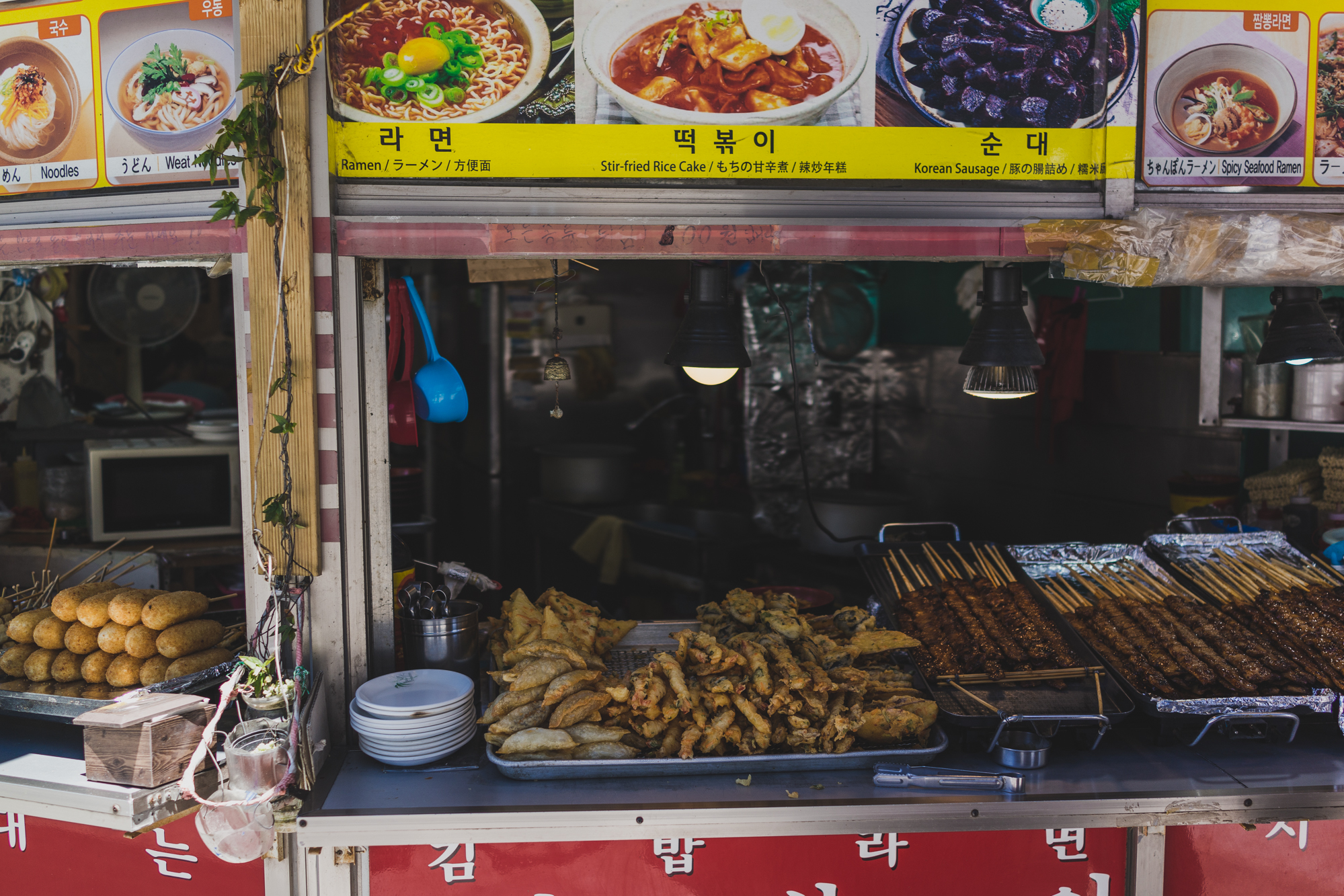 2. Certain escalators, especially in less frequented buildings, have sensors in them where they only start moving when someone steps on. It’s really smart when you think about it–why waste energy running a service that people only use occasionally? I actually find it mildly terrifying, but I also have a fear of heights and stairs, so that’s probably just a personal thing.

And apparently Crocs are banned on them? 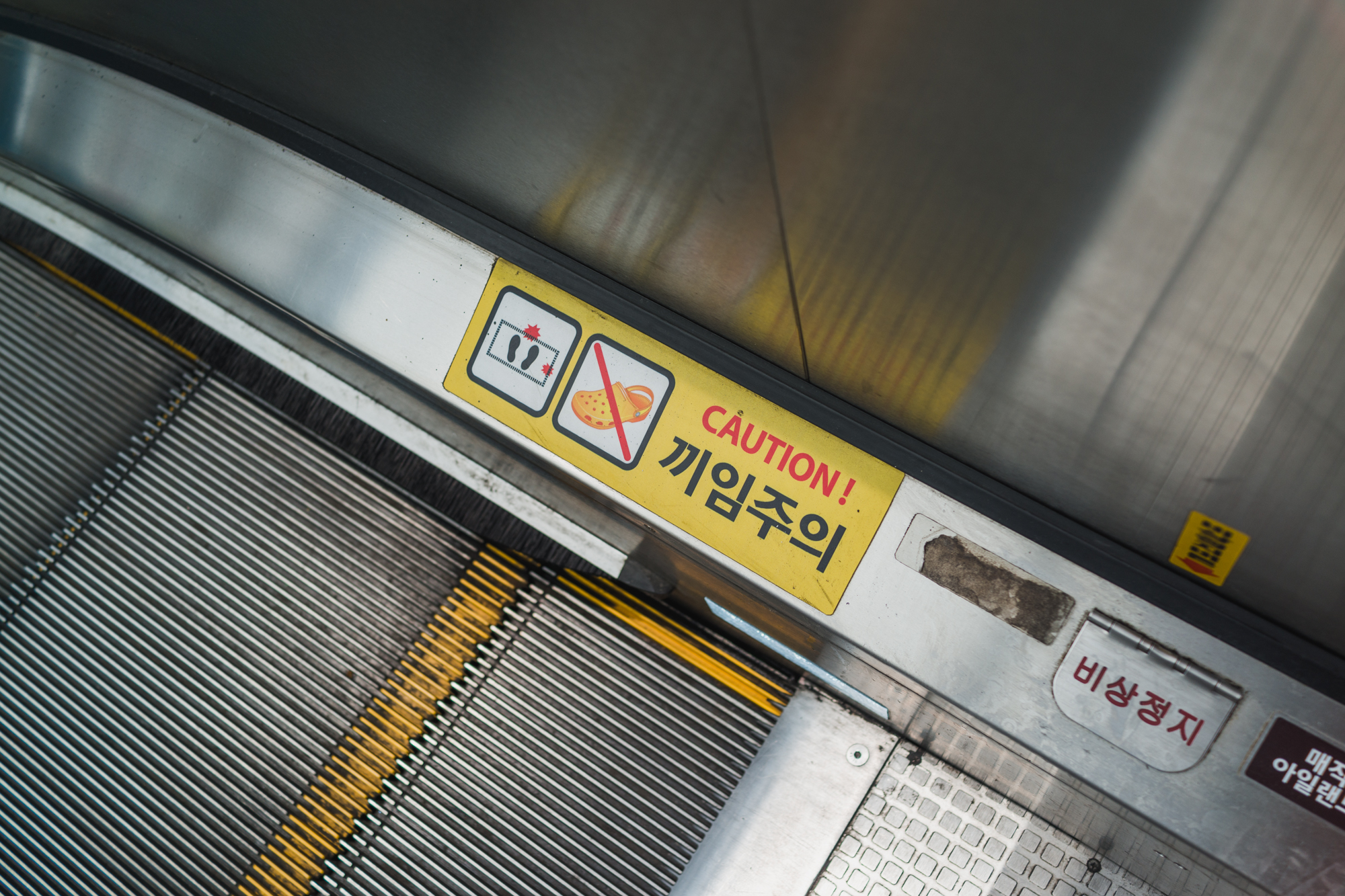 3. Since we arrived in Seoul, I started noticing a white hippo-looking creature popping up on snack labels, in souvenir stands, and even taking over its own storefront in Lotte World. I’ve since discovered that it’s called Moomin and that it’s not even Korean–it’s a Swedish-Finish picture book character. I still haven’t figure out why it’s so popular among Koreans, but it even has its own character café in Seoul. 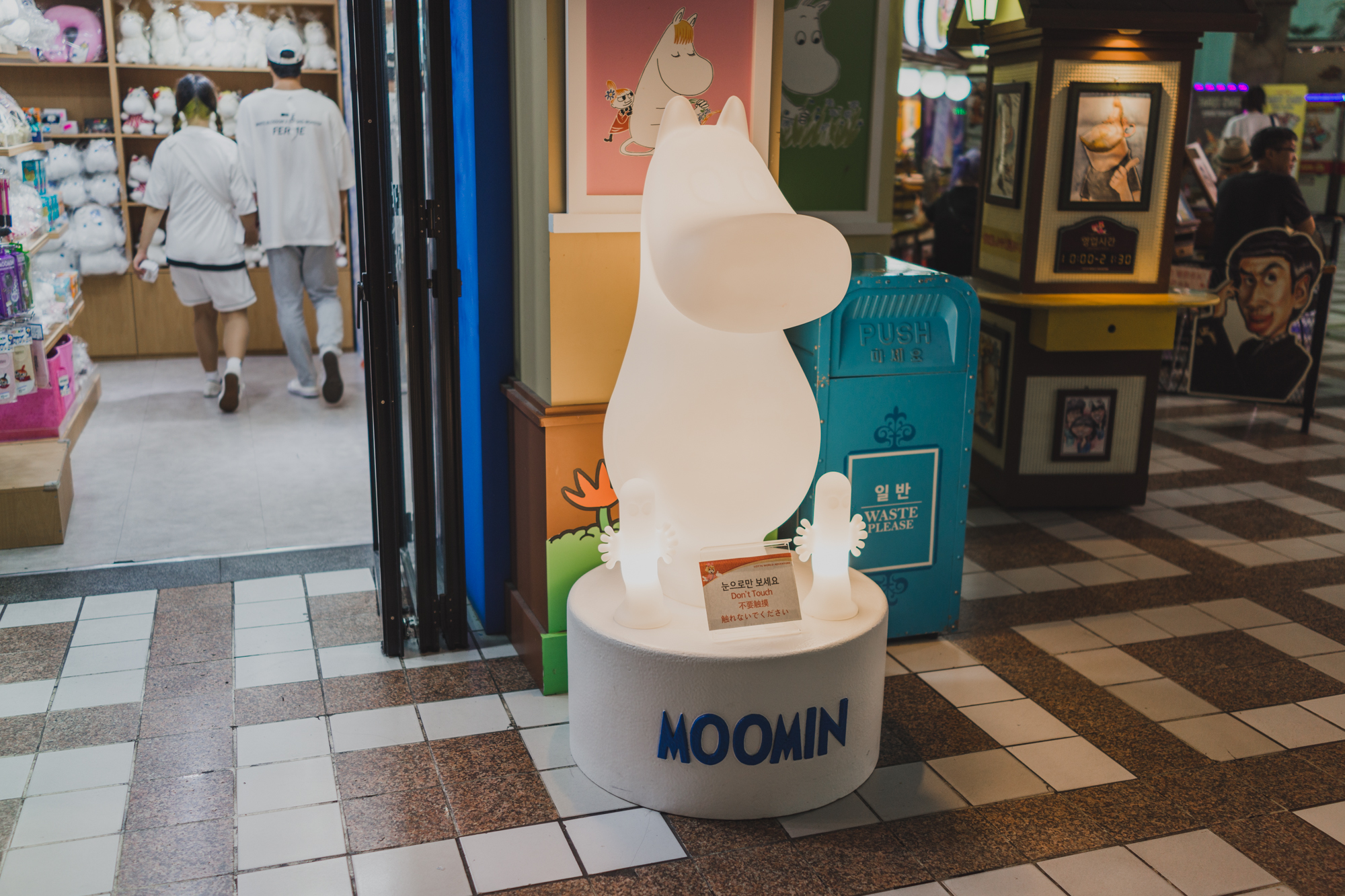 4. Have you ever been walking around on a summer day, baking in the heat and wanting nothing more in the world than to dig into a fresh slice of watermelon? Well, Korean truck drivers have you covered. They drive around small roads in neighborhoods and advertise their fruit deals via megaphone. So far I’ve seen watermelon and peach trucks, but I’ve heard that the selection gets rotated out with whatever is currently in season.

5. I think we all already know that Asians absolutely kill at the drinks & snacks game. One of my favorites I’ve had so far is Milkis, a milk-based carbonated beverage made by (you guessed it) Lotte. It comes in a variety of flavors and can be either canned or bottled. I know, I know, the idea of “milk-soda” doesn’t exactly sell itself, but I promise it’s amazing. Use it to wash down some street-stand sundae or make it a chase to unflavored soju.

6. Nobody wears sunglasses. At all. Even on a sunny day at noon, when you’re looking out a vast expanse of eyeball-burning concrete. I did a little research into this phenomenon and discovered that most Koreans actually associate sunglasses with celebrities or vacations. So while you’ll find plenty of people sporting Raybans on their weekend trips to Jeju, you rarely see anyone wearing them on a daily basis. Which means this entire time I’ve unknowingly looked like I’m trying too hard to be a K-Pop star.

7. Unlike Romanji in Japanese and Pinyin in Chinese, Korean doesn’t have a standardized process for romanizing characters. There are several systems in use, the most popular being the Revised Romanization and McCune–Reischauer alphabets, which means that a roll of gimbap might also be spelled as kimbap on the packaging.

8. Christmas in July is a real thing here. We’ve seen quite a few “Merry Christmas” banners hanging up in hostels and stores, and Lotte World Mall has its own white-and-gold Christmas decor on display at the moment. 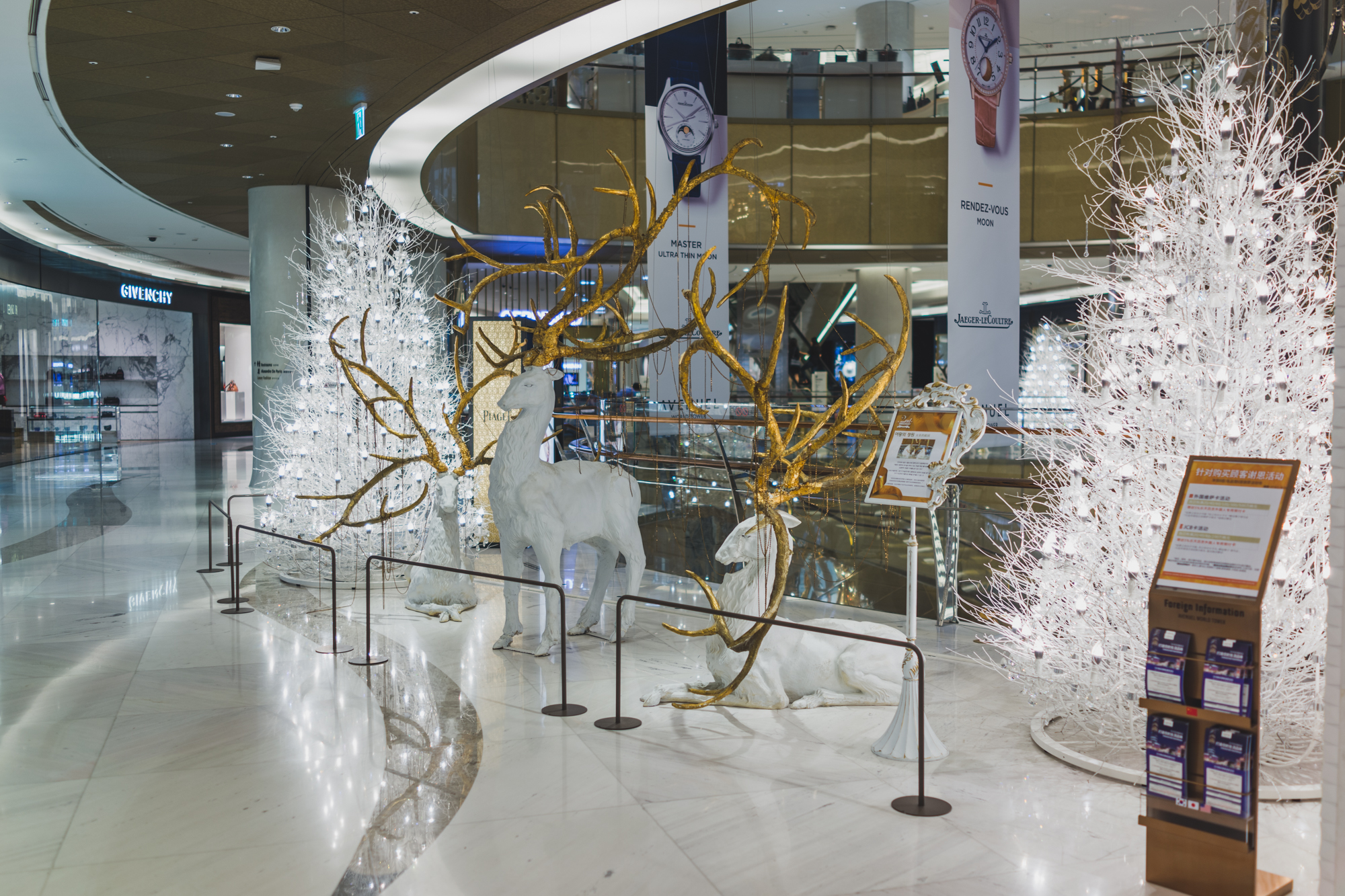 9. Driving in a cramped city is a recipe for dings and scratches (I dare you to try and find a car in perfect condition around the streets of Paris). Koreans have found a brilliant way to avoid this by using guarding foam on all their cars’ doors. They’re like mini-bumpers that attach under your door handle. They also come in fun shapes and colors.

10. Korean temples are all covered in similar decorations called dancheong (literally translates to “red and green”). They can be traced back to cave paintings dating over 20,000 years ago. They’re based on five colors (blue, yellow, red, white, and black) that each symbolizes a different direction. The patterns are boldly vibrant and geometric in style, and can depict anything from flowers to birds to mountains. I find them beautiful. 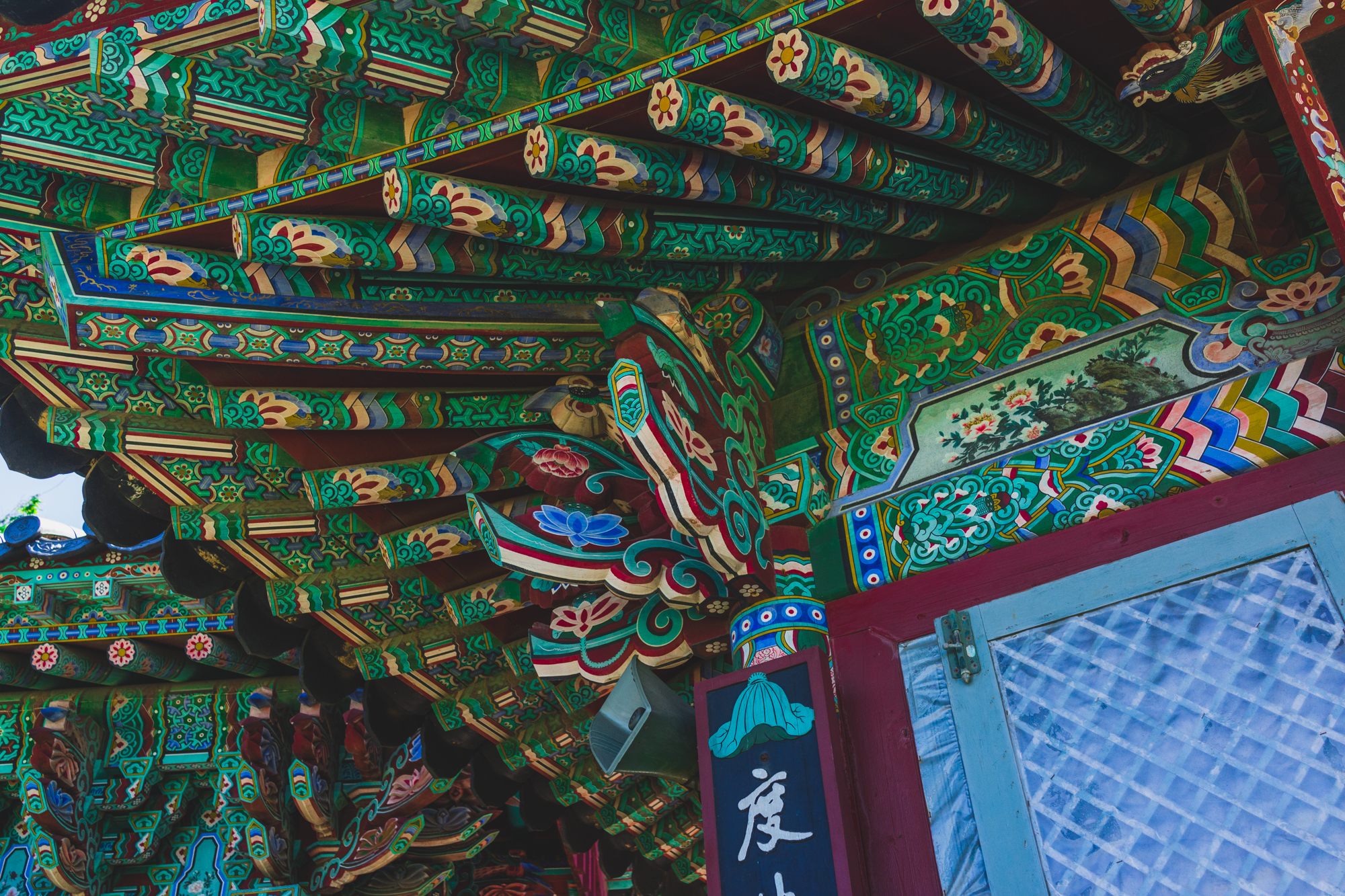 Seoul, it’s been a damned delight. Ready for two more weeks of Korean adventures before heading off to our next country: China!

Have you ever been to South Korea? What do you find startlingly beautiful or wonderfully weird about it? Leave your thoughts in the comment box below. And make sure to subscribe so you never miss a post!