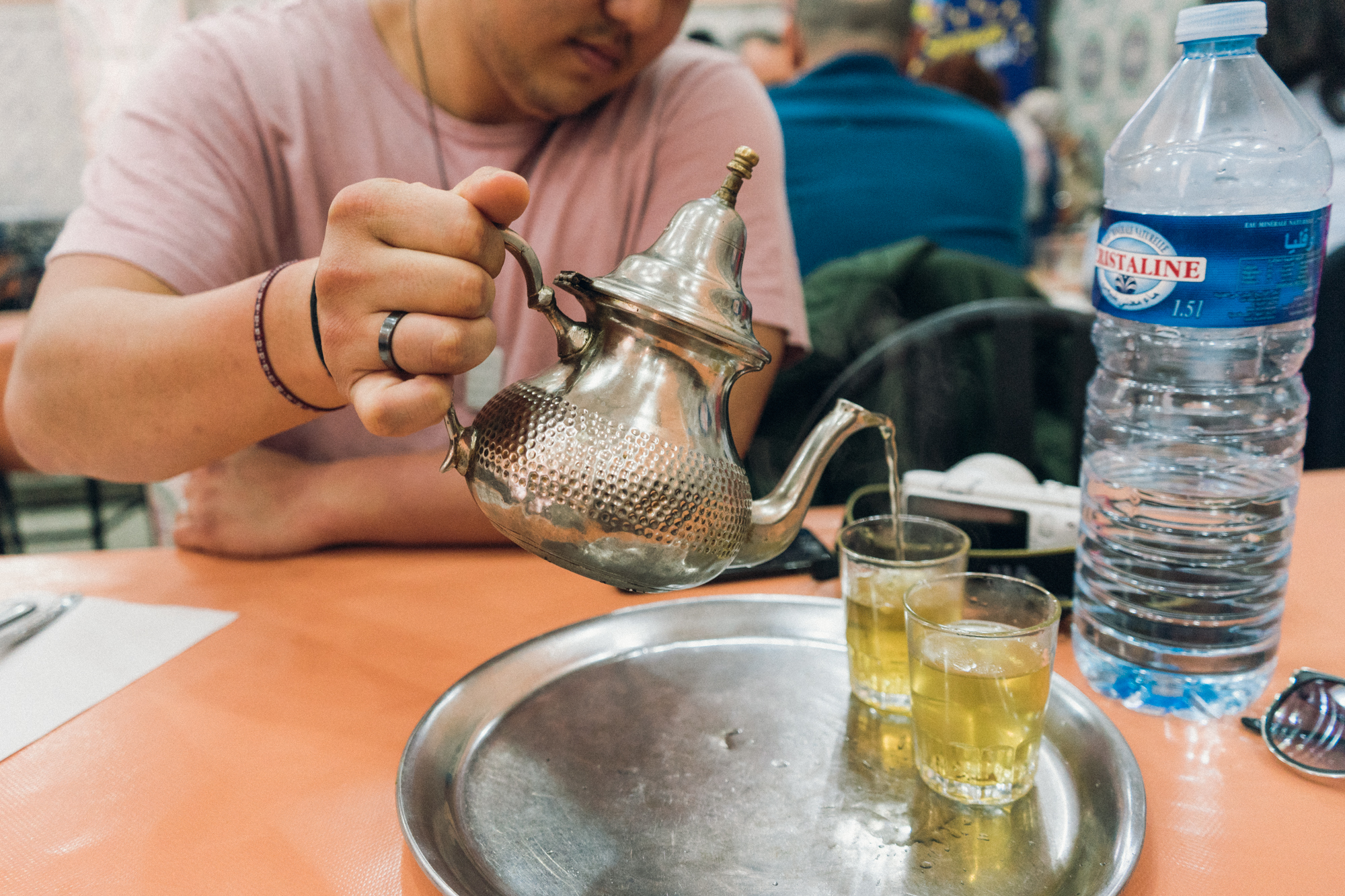 Morocco, an African country with Arabic influences, is a vibrant and eccentric place. Here are the top 10 most interesting discoveries during our recent trip there.

A Portrait of Morocco

…but because camels are so much more useful (profitable) when alive, they’re only eaten when they’ve reached the end of their lifespan. This usually happens at around 30 years. They don’t typically “slaughter” them as an industry. This possibly explains why the camel meat I’ve eaten was always quite tough (grandpa camel doesn’t make for a very tasty burger). You can find camel burgers or camel milk in some of the trendier restaurants.

2. Morocco has a strong coffee culture.

It’s different from what I’m used to back in the States, however; Moroccans don’t care about the quality of their drinks in the same way that a Google intern might discuss the origins of their bean blend when stepping out of a Philz Coffee. You’ll also rarely see a local taking an espresso to-go. Cafés are meant for sitting. Coffee is meant for sipping. Perhaps the most striking aspect of the culture is the gender divide: these shops are filled with and men alone. Women take their coffee at home with friends in the late afternoon.

I have no idea where this originated but whoever was in charge of the marketing campaign for importing and assimilating this brand into northern Africa deserves a hefty raise. This cheese is up there as a household staple along with bread, cumin, and olives. If your riad (traditional guesthouse) comes with free breakfast, I guarantee that you’ll find your fellow guests spreading a wedge or two along with their servings of harcha.

4. Tea is worshipped here and serving it is a spectacle in and of itself.

If you’ve ever been to a Moroccan restaurant in the U.S., you might be familiar with the “raise and pour” method that servers seem so skilled at (how do they not spill?!). Moroccans do serve their tea this way, and as one local explained to us, it’s a tradition that started in the Sahara. He said that when the Berber people would drink tea in the desert on a windy day, would fly into their drink, and the foam that’s created from pouring the drink from up high prevented that from happening. It also keeps the tea warmer for and is a sign of high-quality.

5. Women wear facial tattoos as part of a tradition.

During our two weeks in the country, Joel and I noticed several older women with facial tattoos, the most frequently spotted being a strong vertical line running from lip to chin. We formulated a theory that Morocco might be home to an underground mafia made up of ruling female elders, but I later discovered that it was actually a dying tradition of the local Berber women, who used to tattoo their faces upon reaching adulthood.

6. The KFC is different.

The KFC in Morocco literally sells hamburger buns as a standalone roll of bread and I find this personally offensive. Colonel Sanders, I expected better of you.

And by not very popular, I mean illegal. Even though Moroccan culture is strongly influenced by the Arab world, the tradition of the hookah never quite made it here. You’ll find a few sellers here and there in the of the main cities selling hookah pipes in their shops, but in order to actually smoke in public, you’ll need to find a high-end restaurant or bar that provides it (lower-end cafés are sometimes subject to police raids).

8. All tourists receive a dedicated tracking number when entering the country.

It’s written alongside your entry stamp. We were asked for this number at our first hostel, and instead of rummaging through the pages trying to find the right square, the staff immediately and accurately point us to the back of our passports. As it turns out, Arabic passports are arranged from right to , so immigration officers usually turn to your back page when looking for an empty space.

9. Data is a universal need

Joel and I spent two days out in the desert of Merzouga. On our first day, we were wandering around the dunes just outside our camp when we noticed someone sitting on top of a hill in the distance, just looking out at the landscape. I turned to Joel and whispered in awe, “It’s so cool that the locals here can just sit in the middle of the desert and savor small moments like that. I wish our generation back home would do that every once in a while, instead of spending all their free time on Twitter.” I learned later that they only climb to the top of dunes in order to get a better 4G signal.

10. Morocco is definitely and undoubtedly, Africa.

Another quirk of the Sahara: everyone really likes to remind you that you’re in Africa. A typical conversation:

Moroccan: “Would you like some orange slices for dessert?”

I once asked one of our Berber hosts why they say this all the time, to which he responded, “Well, you are in Africa.”

Have you ever visited Morocco? What did you think? Let me know in the comments below!