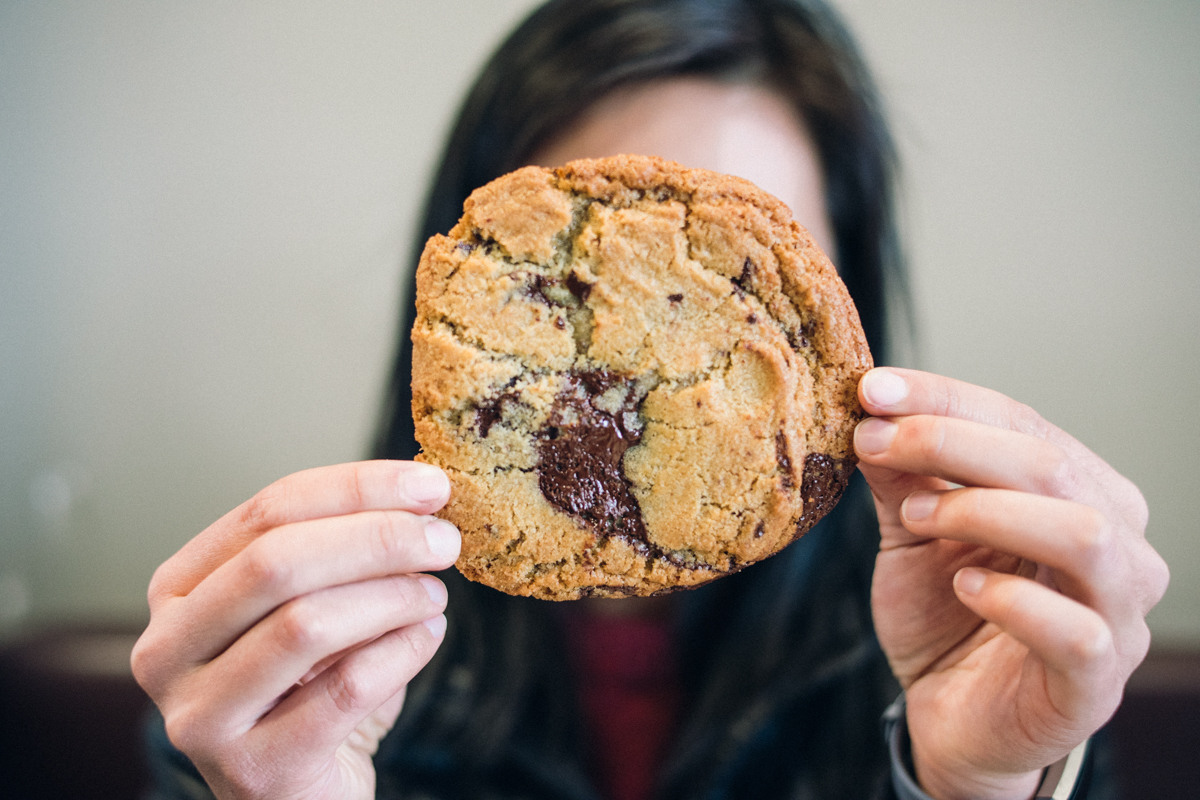 A dessert-themed tour through some of San Francisco’s arguably best and most acclaimed bakeries: Tartine, b. patisserie, Mr. Holmes Bakehouse, and Arizmendi.

If there’s one thing to know about me, it’s that I like sweets. And if there’s one item in particular that always calls me back, it’s the classic Chocolate Chip Cookie.

So it was to absolutely no one’s surprise that when my friend Gloria asked around for willing volunteers to explore San Francisco’s glowing bakery scene for her birthday in lieu of a Sunday brunch or night on the town, I was first in line.

Nine people. Four bakeries. One mission: to discover the best chocolate chip cookie that this city has to offer.

Tartine Bakery is truly God’s (well, Liz and Chad’s) gift to man. With plans to build a massive pastry conglomerate in the belly of DTLA (Joel, if you’re reading this, plan on many Saturday mornings at this beautiful building) and a location already open in Seoul, Tartine is well on its way to becoming a phenomenon well outside of San Francisco.

Rather than brave the lines at the OG location by Dolores Park, we decided on a visit to Tartine Manufactury.

This was my first time dining at the bakery’s newer, but bigger, sister location. We inquired about wait times for a table (those looking for reservations are out of luck). There was no line or any other groups waiting in sight.

Dreams crushed (but mostly confused—where were these hoards of people waiting to eat?), we took our chances at the free-for-all tables in the back and lucked out with a long picnic table large enough to hold us all.

I’ve been to Tartine (the original) countless times over the years, and I can say with confidence that nearly all of their pastries are out of this world (so long as you manage to snatch a fresh one).

Above all, they are known for their bread, also referred to as the Greatest Loaf of Bread You Will Ever Eat. The center is chewy and flavorful, and the crust, oh God, the crust. Best served toasted in pairs, with high-quality butter and several layers of oozing cheese sandwiched between.

After admiring our selected ensemble of pastry, spread temptingly over the tabletop like gifts on Christmas morning, we dug in.

The first test subject was of course, their chocolate chip cookie.

Tartine’s cookie is unique. It lacks the even texture of your classic Tollhouse—in many ways, it is the opposite: crispy and chaotic. Large rings of dark chocolate and a smattering of sea salt dominate the flavor and lend itself to that classic Tartine flavor found in most of its baked goods: mature, complex, and none-too-sweet.

It’s a cookie that feels like an adventure in itself, rather than an afterthought grabbed alongside your morning coffee. It requires time and to appreciate fully. While I’m a fan of the browned edges and salted touches, it lacks the buttery-sweet richness (read: addictiveness) of a more classic cookie.

Ah, Mr. Holmes. How you light up social media with your glowing neon signage and Frankenstein creation combined from the best features of the classic croissant and moist muffin. Flakey, inflated with cream, and put on rotation through a variety of trendy flavors (think honey lavender and mai tai cream), the has turned this showstopper of a bakery into one of Instagram’s favorite dessert darlings in recent years.

Serious pastry lovers line up pre-opening each morning to taste one of the seasonal flavors (only one is showcased per-day, as thoroughly described via edgy Instagram-style captions on their menu). Of all my years in the Bay Area, I had yet to stop here for a photo, let alone an infamous .

Sadly, having arrived just past 2:30 pm, there were no in sight. But a neatly-aligned row of beautiful, photo-worthy delicacies remained, including a pink, raspberry-rose croissant, which I purchased immediately.

We took turns taste-testing a variety of pastries out of their gold-lettered to-go box, of which the cornflake cookie seemed to be the clear winner (buttery, chewy, crunchy, a tad salty).

Their chocolate chip cookie was large and thick, with more of a and dry texture, and a much sweeter contender than aforementioned Tartine (they used large chunks of milk-chocolate chips layered evenly throughout, which surely contributed to the sweetness).

Mr. Holmes, like Tartine, can be found in SF, LA, and Seoul. the three pastry-capitals of the world, judging by franchise choice.

I discovered this place a year ago when my friend, Preeti, pointed out her close proximity to it as I was leaving her apartment one day.

This is probably San Francisco’s second most famous bakery, barely outmatched for the limelight by Tartine’s wafting baguettes (and for good reason); however, unlike Tartine’s crackling croissants and Mr. Holmes inventive , b. patisserie’s name to fame is their , which are essentially a denser croissant with caramelized sugar on top (AKA the future of pastry).

I had no idea how obscure of a pastry this was until an episode of The Great British Bake Off (top television, btw), where a group of amateur pastry chefs lamented the odd pastry-de-jour that they would be baking for the afternoon. No one seemed to know what it was, or, like me, how to pronounce it (it’s “queen a-” if you were wondering).

Our group, once again, sampled a breadth of baked goods here. b. patisserie has a way of doing that to walk in with your sights set on a single pastry, then somehow walk out with an entire box.

Among the samples were a milk tea cake, mango tapioca pudding (can you tell the owner is Asian?), and holy heavens, a sesame . This thing was life-changing (LIFE CHANGING). The pastry dough was flaky and buttery and sweet, and the sesame filling added such a depth of flavor without distracting from the main pastry or overwhelming the sweetness. I grabbed a second for the road.

At this point, everyone was sitting slightly comatose at one of the tables in the corner, reflecting on the last two stops and wondering how we were going to make it to yet another testing ground. I, on the other hand, was feeling great (I have a never-ending sweet tooth that, gone unchecked, will likely lead me down a path of morbid obesity and/or type II diabetes, but I digress).

We moved onto our third cookie of the day, and by way of introduction, my favorite. It reminded me much of Tartine’s, with the crispy edges and chewy center, and the large plates of chocolate layered in-between. b. patisserie, however, managed to infuse more buttery-brown-sugar goodness and less flour than Tartine’s, and it was also served fresh off the baking tray, which probably added to the appeal. And considering we were about a dozen pastries in at this point, the fact that I applauded it with a more subdued appetite says a lot.

Last (and also, kind of least), is Arizmendi.

Arizmendi was probably the least memorable of the four stops, but that was to be expected—they’re known for their pizza (as a cousin of Cheeseboard in Berkeley), and less so for their baked goods.

We ordered a slice of pizza to taste, and our final cookie of the day. Theirs was a much more traditional, chain-coffee-shop style, oversized chocolate chip cookie. It had a mostly chewy but was on the drier side. It reminded me of a higher quality Chips-Ahoy (or maybe closer to a Starbucks version), with less complexity and brown-sugar flavor than found in the previous bakeries.

And…that’s all folks! A solid afternoon spent engaging in my favorite pastime—eating baked goods. Happy birthday Gloria, and may your 26th year of life be everything you hope it to be. I read somewhere that eating cookies on your birthday brings good fortune for the upcoming year (okay I might have made that up just now).

Of course, I know this list is anything but conclusive, considering we missed some of the classic heavyweights like Craftsman and Wolves, Devil’s Teeth, and Anthony’s. I’m officially on a mission to hunt down this city’s best cookie (with proper forensic analysis to follow). Look out for updates!