Four months have come and gone and we’re officially a third of the way through our trip! (*insert gasping emoji*) Shit’s crazy.

We landed in Vietnam square on the 1st of October and stayed in the country for nearly the entire month. To be honest, I was a little hesitant of visiting at first. Vietnam was one of the only countries that continuously raised a few eyebrows back home when I was telling friends about our upcoming trip. They all suggested that I skip it, that the people were rude and pushy and the food wasn’t that great. And then I came across tons of research pointing to all the scams that tourists commonly encounter, and read over Nomadic Matt’s notorious article that seems to have swept the net over the last couple years.

If my expectations hadn’t been so low, maybe things would have been different. I can’t tell you for sure. All I can say is that Vietnam absolutely blew me away. By the end of October, it ended up becoming my favorite country (yes, even surpassing Japan). It’s still edging far enough off the common tourist radar that you actually feel like you’re in a foreign country, but it has enough to keep you busy and enough infrastructure that it’s still a place you want to visit. The food is actually better than what you can get back home, the landscapes are unique and varied, experiences are cheap enough to be had, and the people are just so damn amazing.

It’s for all those same reasons that we’ve been a little more than disappointed with Thailand. We flew into Bangkok in the last week of October, and so far, it’s been pretty “meh”. Granted, we accidentally arrived during the peak of Thailand’s year of mourning—the day before the late king’s funeral. Most of the famous sights were closed and the streets felt a little more than somber. But even beyond that, there seems to be an invisible gap between the locals and foreigners that we’re finding difficult to bridge.

We still have a week left here (and we’ve yet to visit the most famous part of the country—the south), so hopefully, things will get a little better from here. 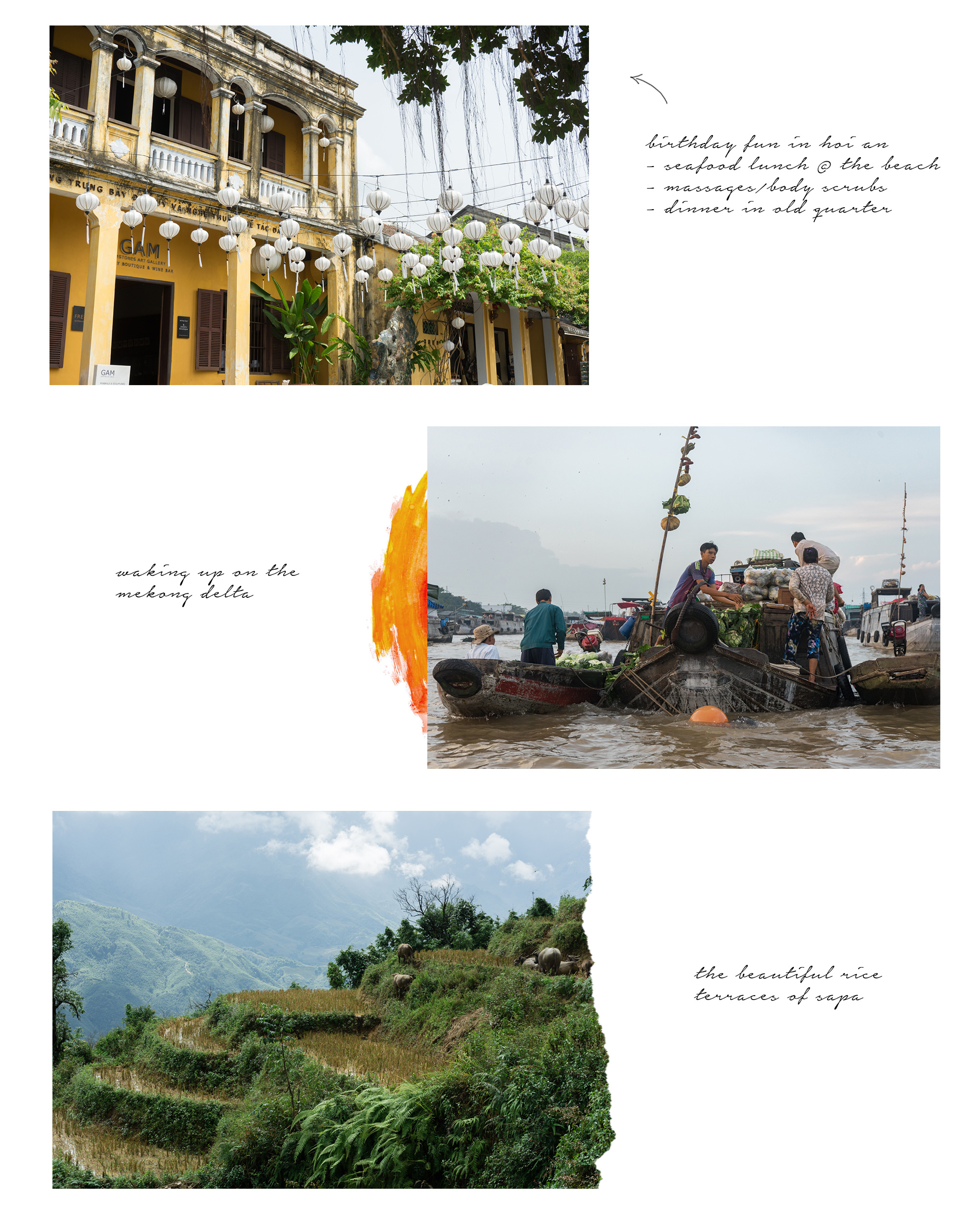 Our first night in Hanoi: Joel and I have started a little tradition of “going all out” our first night in a new country (when we’re not losing passports or getting bait-and-switched with Airbnbs). We treat ourselves to a nicer dinner than usual, then check out the nightlife scene. In this sense, Hanoi was a wonderful welcome into Vietnam—we wandered the night market nearby our hostel and sat down in the middle of the crowd to eat some delicious BBQ and sip on free beers. The energy in the city was absolutely electric.

Trekking in Sapa: We stayed with a local family and explored their side of the Sapa hills with them. A lot of the villagers in the area have never been so far as Hanoi, and I loved trading life experiences with our guides. One of the girls was the same age as me, and we talked a lot about marriage differences between our two hometowns. Getting to connect with another culture like that is an experience that ironically seems to be getting rarer and rarer into today’s globalized environment.

Exploring the countryside in Phong Nha: If you ever make it to Vietnam, don’t miss this place! Phong Nha only opened to tourists a few years ago (there wasn’t an accessible highway before that), so it’s still fairly new and raw on the backpacker trail. We had such an epic time riding a scooter through the national park (a cross between an unspoiled Hawaii and Jurassic Park) and exploring some of the world’s best caves. I even got to kill my own chicken for lunch!

Birthday spoils in Hoi An: To celebrate turning a full quarter-century old, we treated ourselves to a day of luxury experiences. We started off with a seafood lunch by the beach, got massages and body scrubs after, and had a gourmet dinner in the town’s most famous restaurant. The best part was that the whole day cost the same as a single meal in a nice restaurant back home.

Watching the sunrise over the Mekong Delta: We took a quick overnight trip to Can Tho, the main city in the Mekong Delta area, during our last few days in Vietnam. We woke up in the dead of morning for a nearly private boat tour of the Cai Rang floating market. Drifting down the river and watching the sky slowly transform from black to pink to blue was breathtaking.

Cooking class in Chiang Mai: Despite my downing on Thailand, I did really enjoy our recent cooking excursion here. We booked a half-day tour that included a trip to the local market to pick out ingredients and then cooking five delicious Thai dishes. The meals we made were actually the best food we had here so far! 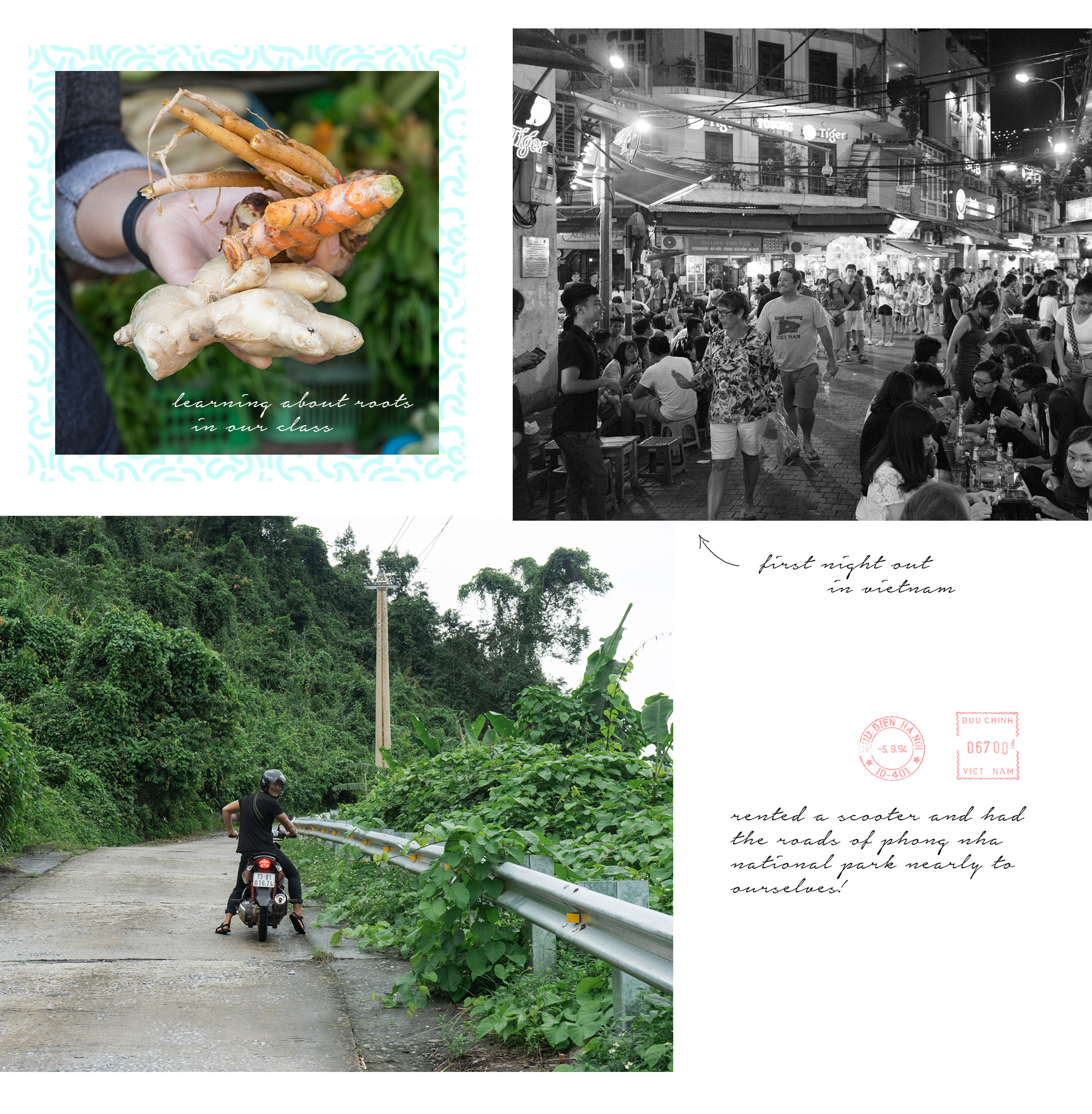 Getting sick all month: This was more of a lowlight for Joel than for myself, but we ran into quite a few health issues over the past few weeks. Joel had a terrible bout of food poisoning (I was spared, luckily) back in Hanoi, followed by a nasty flu only a few days later. He had a difficult time trekking through the mud in Sapa and we eventually had to cut our 3 day tour down to 2 days to get him back to the capital to rest. I developed a pretty bad cold in Nha Trang, so we couldn’t fully experience the night life there like we wanted.

More bed bugs: I noticed a few tiny insects crawling around my seat on our bus to Can Tho. It was only a three-hour trip and slam packed with locals, so I tried my best not to think about it. A few days later I had a trail of ugly bite marks along my arm and thigh—turns out I was sharing the journey with a family of bed bugs. Yum.

Getting ripped off in Hue: Although I’ve just about spent this entire post praising Vietnam, we still had a few disappointments along the way. One such was during our search for Anthony Bourdain’s recommended bun bo hue spot in Dong Ba Market. After wandering around the place for longer than we wanted, we ended up at a different stall and, hungry and tired, decided to just eat there instead. The lady kept bringing us new dishes that we didn’t order (we sent them all back). Even though we kept emphasizing that we JUST wanted bun bo hue, she ended up charging us double, because apparently some of the meat that came with our dish was an extra charge. Cue loud argument in front of the whole market. We gave in eventually (no point in arguing over a few cents in the grand scheme of things), but it did leave us with a bit of a bitter taste.

Beef Pho at Pho 10: I never understood what the big deal was about pho until I tried this place. Joel and I passed it a few times during our first week and always saw it packed with people. We decided to try it and oh my god, I get it now. The broth was freaking amazing. We loved it so much that we came back the next day for another bowl. Make sure to stop by Pho 10 if you visit this city.

Banh Mi Queen: Banh Mi is an interesting dish in Vietnam. It’s simultaneously ubiquitous yet incredibly varied, where you’ll find everything from BBQ meats to fried eggs to liver pate smothered along the baguette. Most of the versions we tried were tasty enough, but the appropriately named “Banh Mi Queen” in Hoi An absolutely stole our hearts. Spicy, porky, and eggy, all held together with a baguette so fresh and crunchy you might think you’re in Paris.

Madam Then’s Rice Pancakes: Banh Khoai is a famous dish of Hue, and while you’ll find different versions all around the country, this city’s was our favorite. They fold up different proteins and veggies in a deep-fried, crunchy-yet-chewy yellow pancake (taco style), and serve it as an appetizer or snack. Madam Then’s take on the dish was particularly memorable.

Cao Lau in Hoi An: The special thing about cao lau is that it can only be found in its authentic form in the streets of Hoi An. The noodles are what make this dish so famous—they’re made with water from a local Cham well, so any attempt to recreate it outside of Hoi An won’t be the same. It’s fresh and chewy and crunchy (thanks to the fried pork bits!) and just everything that you imagine classic Vietnamese cooking to be.

Bun Bo Hue in Hue: After our terrible encounter with fake bun bo hue lady, we returned to find the real deal. Armed with a fuzzy photo of the stand we were looking for, we followed a trail of helpful locals to the real Bourdain experience. Bun bo hue is one of my favorite soups and this one did not disappoint. 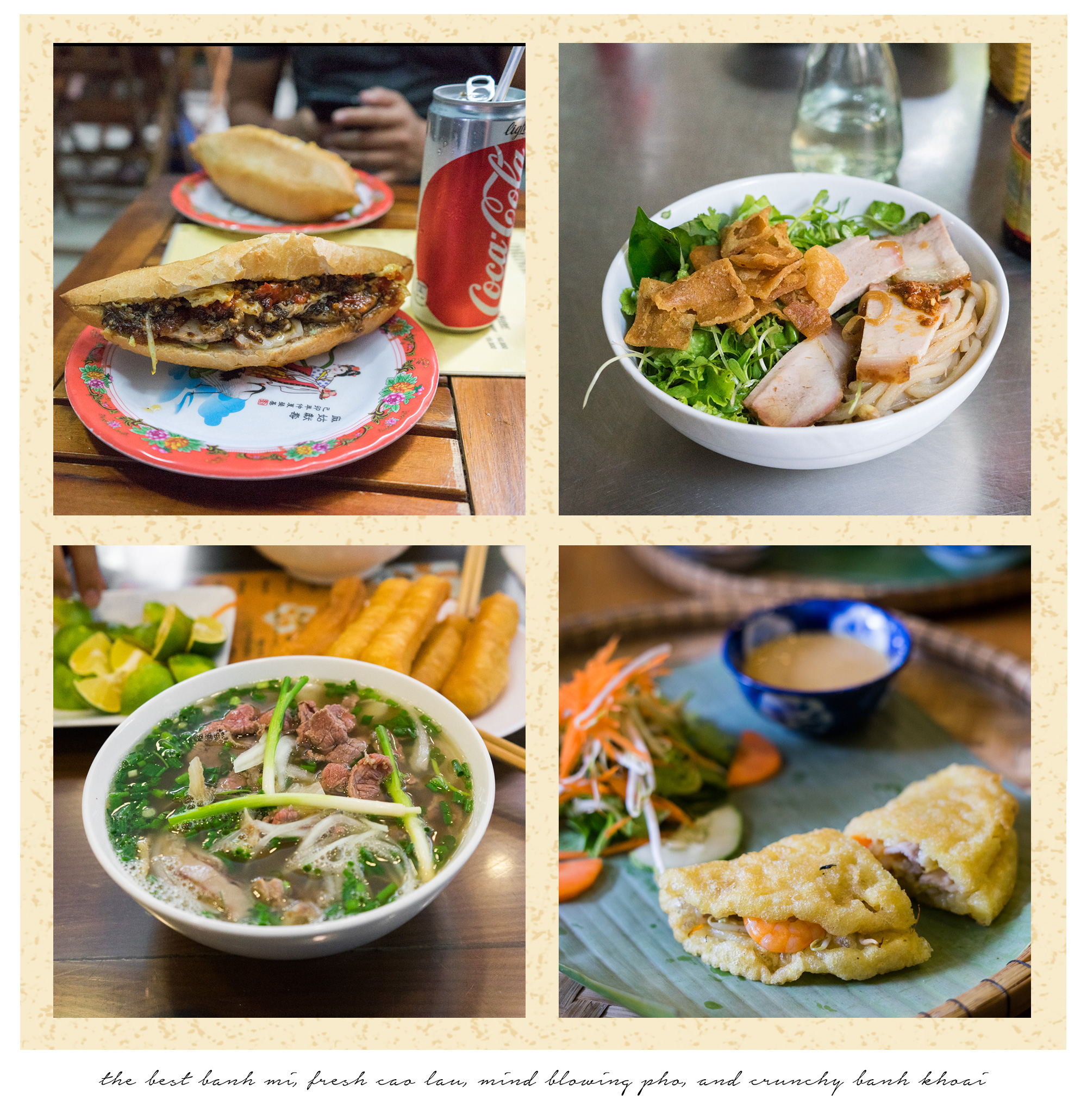 We’re exploring a little more of Thailand before flying to Myanmar next week. Then we’re (hopefully) getting out of Asia and into Europe. I say hopefully because our dear Mr. President seems to have pissed off yet another country and gotten Americans banned from traveling to Turkey. We’ve heard some rumors that you can circumvent these restrictions if you’re traveling from outside the US, and since we already have multiple flights and accommodation booked (nonrefundable, *cry*), we’re just going to take our chances. Pray that we don’t get captured by Turkish immigration, plzandthnx.