After spending five months baking in the intense heat and humidity that is Asia in summer (and SE Asia during any season), our wish for colder weather finally came to fruition: it’s 40 degrees outside, there’s snow on the ground, and I’m officially shivering in my new boots.

Jumping from Yangon to Istanbul in a 24-hour period was shocking to say the least, and it wasn’t the only time we were hit with vast differences when traveling this month. November was a time for ongoing culture shock, as we navigated our way from the beaches of southern Thailand, to the dusty temples of Bagan, to the futuristic skylines of Singapore, to the historical crossroads of Istanbul, and finally, to the snowy, post-communist city of Sofia. My head is spinning.

Landing in Turkey was the most jarring experience of the lot. After months of noodle soups and plastic stools, we finally arrived in Europe, and unexpectedly fell in love with Istanbul. From the people to the food to the free-roaming felines on every corner, the city quickly became a place that I wanted to return to in the future (maybe even to live in!).

We had two unexpected itinerary changes: cutting out Egypt for financial reasons, and briefly exploring Singapore during a long layover. Singapore was nice enough, but I don’t think I’ll be returning anytime soon. And Egypt: I’ll be back for you one day. 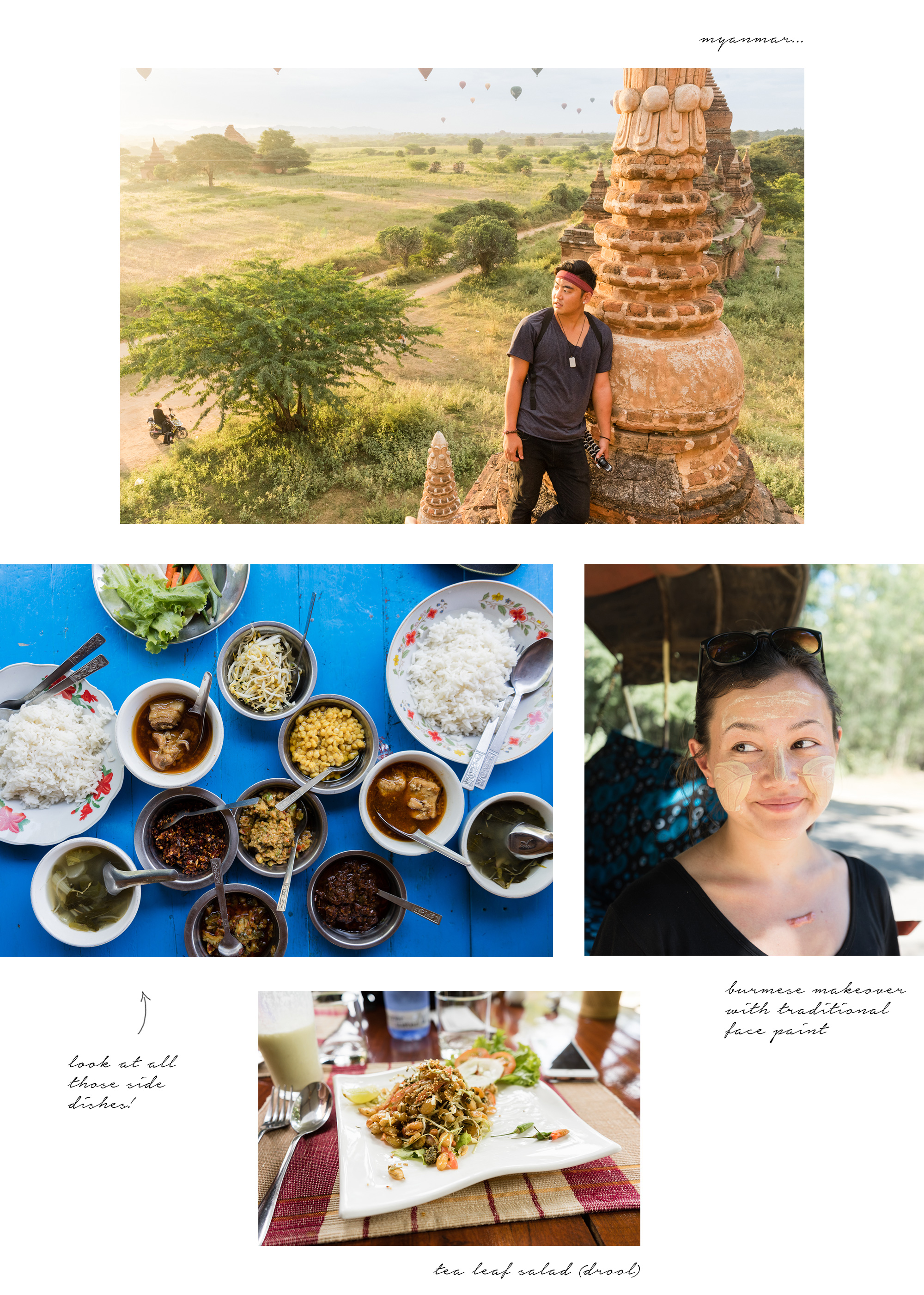 Celebrating Yi Peng in Chiang Mai: I came across a photo of Yi Peng some years ago and never quite shook the desire to make it out there one day. We ended up planning our time in Chiang Mai around the festival, which unfortunately meant skipping out on the Full Moon Party (we had originally wanted to do both, but the dates overlapped). No regrets here! The festival was such a unique experience (despite nearly getting lit on fire multiple times), and I’m so happy we got to experience it alongside friends from home.

Island Hopping in Krabi: As much as I love ranting about Thailand to anyone who asks, I have to admit that the island segment of our trip was really enjoyable. It was the first time I had ever experienced the turquoise glory of a tropical beach, and we had a fun time going out with the people in our hostel on bar crawls through Phuket and Krabi. I even ended up meeting a few travelers who knew friends from back home!

Watching the Sunrise over Bagan: There are few true unspoilt gems left in the world. That’s one of the main reasons I was drawn to Myanmar, which only opened its doors to mass tourism a few years ago. Traveling through the streets of Bagan felt a lot like the wild west of Asia, and you end up spending hours at major sights without ever spotting a fellow tourist. Watching the sun come up over a field of thousand-year-old temples was truly memorable.

Breaking Stereotypes & Experiencing Turkish Hospitality: Turkey has gotten a lot of heat from the media the last three years. The terrorist attacks and military coup reduced the number of foreign visitors to the country by about 40% between 2014 and 2016. It’s no wonder that whenever we mentioned Turkey in our trip itinerary, we received more than a few concerned comments. But we didn’t let that stop us. The whole point of traveling is to see things with your own eyes, rather than through an Instagram post or a story on CNN. And so we arrived safely in Istanbul, surprised to find that it felt just as safe and comfortable as any city back home. It ended up being one of the only places we’ve visited this year where locals just randomly stop you in shops or on the street to have a chat. Turkish people are eager for the world to see that there’s so much more to their country than choice media coverage, and I’m so happy we gave them a chance to prove it.

Ballooning in Cappadocia: Another one for the books. Flying over Cappadocia was one of the top experiences I had been looking forward to during our year abroad, and we almost didn’t get the chance—balloon rides were canceled for an entire week before we arrived, including the day we were scheduled to fly. Our hotel rearranged for us to go the next day instead, and the winds were in our luck! We watched as the famous fairy chimnies grew tiny below us and hundreds of other balloons floated along a backdrop of soft, early morning light. It was one of the top memories of the year so far. 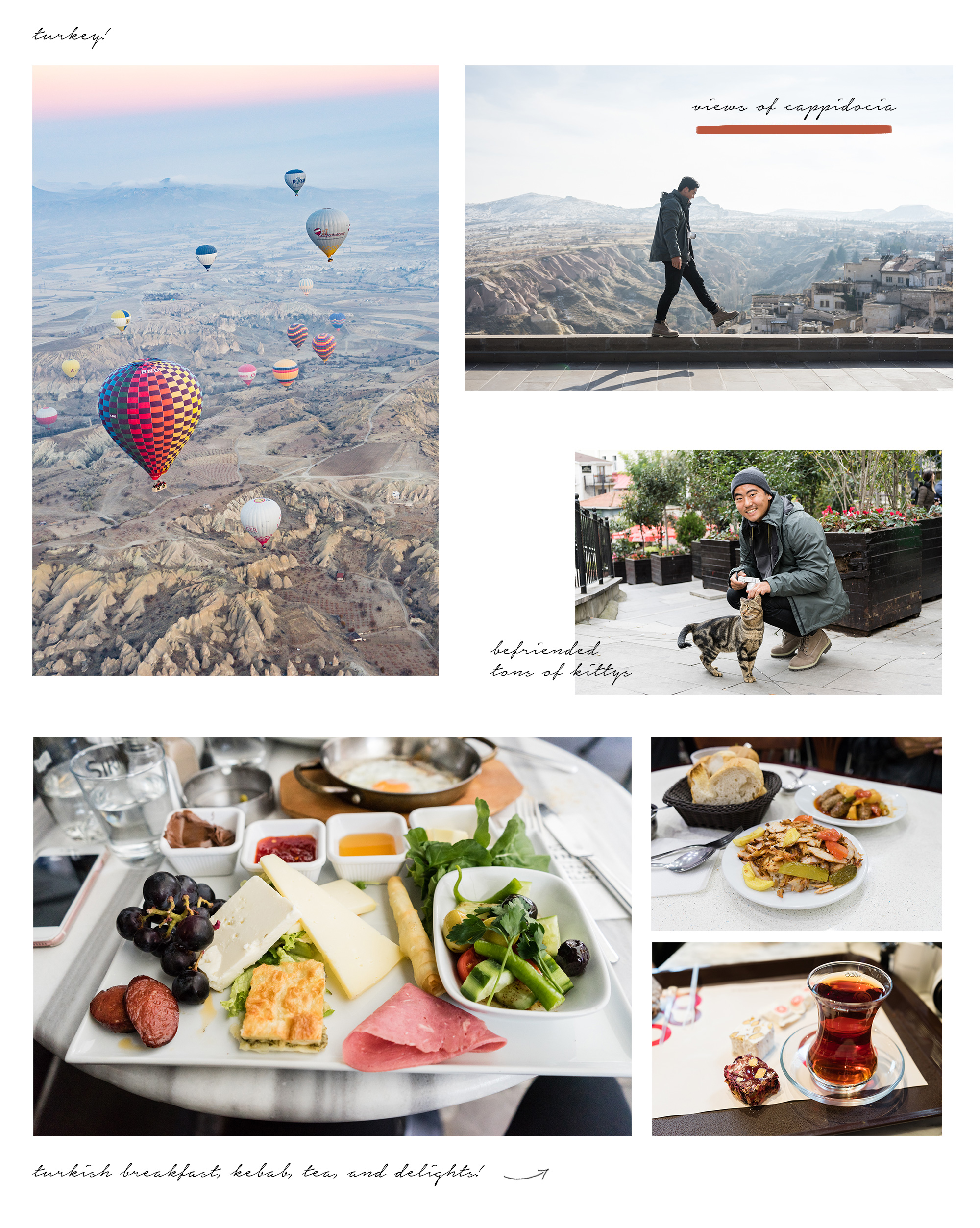 I Hate Technology (A Memoir): Scheduled to release in early 2018! (jk) I dropped my phone, breaking the internal camera (who does that?!), and ended up getting it repaired for the third time so far this trip. My external drive also stopped working due to an unfortunate accident. You know how large drives can be expensive to buy? Well, turns out they’re even more expensive to repair. Some guy tried charging me $750 (AMERICAN DOLLARS) to recover the data. And that’s on the low end, from what I hear. So I said goodbye to my little Seagate buddy, thanked my lucky stars that I thought to sign-up for a cloud back-up service before leaving home, and will be restoring my 300gb of photos at the end of December.

Note: I use Backblaze to back-up my files for $5 a month. If you’re interested in giving it a go, use this link to get your first month free. You’ll be happy you did when some Turkish guy goes asking for a week’s paycheck just to recover a few photos. 😉

Getting Ripped Off in Sofia: Our first day in Bulgaria was a little less than welcoming. It was early, dark, and really freaking cold, so we hopped in the first cab we could find and were absolutely flabbergasted when the total bill came to $24 USD just for a 2-mile ride. For those of you who don’t know, Sofia is ridiculously cheap—I’m talking $2 taxi ride cheap. So yeah, we made a rookie mistake and got more than a little ripped-off. But considering it was only our second time getting cheated in the last five months (and only losing 20 bucks to boot), it could be worse.

Burmese Curry: We didn’t have too many singular meals over the month that stood above the rest. More often, we’d find certain types of food that we loved so much we’d eat it over and over again, with each bite just as wonderful as the last. Traditional Burmese curry was one such instance—we had it several times during the course of our week in Myanmar, and we loved it every time. It’s a unique blend of Indian and Thai flavors, centered around a plate of rice, to be eaten with your chosen curry and an accompanying spread of side dishes.

Tea Leaf Salad: I could eat this stuff every day! It’s a Myanmar specialty, consisting of pickled tea leaves, crunchy lima beans, chopped tomatoes, and a sprinkle of sesame, among other ingredients. The curious mix of flavors and textures make this dish infinitely more interesting than the average American salad.

Turkish Breakfast: When it comes to breakfast, Turks love variety. They bring together a wide and diverse range of options every morning, typically including bread, honey, jam, butter, deli meats, various cheeses, olives, cucumber, tomato, boiled eggs, all plated in bite-sized portions. And of course, it’s all served alongside a bell-shaped glass of steaming cay. It’s much lighter and more nutritious than what I’m used to back home.

All the Kebab: Who knew shaved meat could be so delicious? Kebab is served all over the world in different styles (shawarma and gyro come to mind), but Turkish people do it best. It’s served as-is, crispy and seasoned, without any additional sauces to distract from the flavor. And the best part? It’s usually piled on top of a plate of Turkish pilaf, which might just be tied with Japan for having the best rice.

Baklava & Turkish Delights: If diabetes was a dessert, it’d look a lot like baklava. Flaky dough and pistachio crumble, all drowned in an ungodly helping of honey. It’s as sinful as it is delicious. Turkish delight also became an unexpected favorite. You can find it all over Istanbul, in dozens of different flavors, and it’s the perfect company to a glass of Turkish tea or coffee. 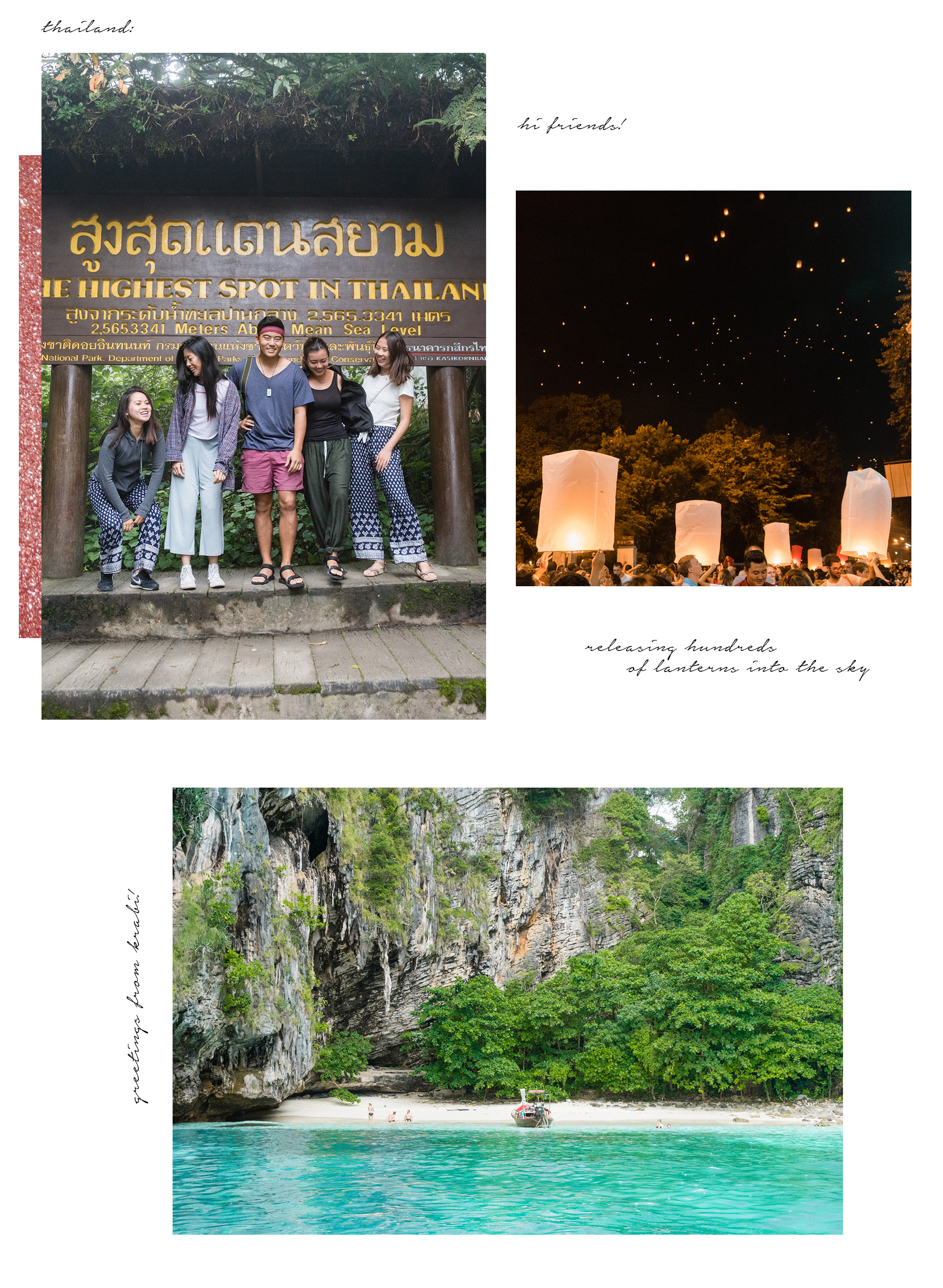 Now that we’re in Europe, we’re planning on doing a lot of overland travel and stopping in between major destinations to get a feel for some of the smaller countries. First, we’re passing through Bulgaria for a few days before heading off to Romania—one of the countries I’ve been most excited to visit this trip. Then it’s a week in Hungary before we make it to our holiday destination: Vienna! I’m so excited for all the Christmas markets in Eastern Europe, especially since we missed out on most of the things I love about fall while in Asia (white sand beaches don’t exactly scream “cozy”). Get ready for lots of Insta stories ft. mulled wine.