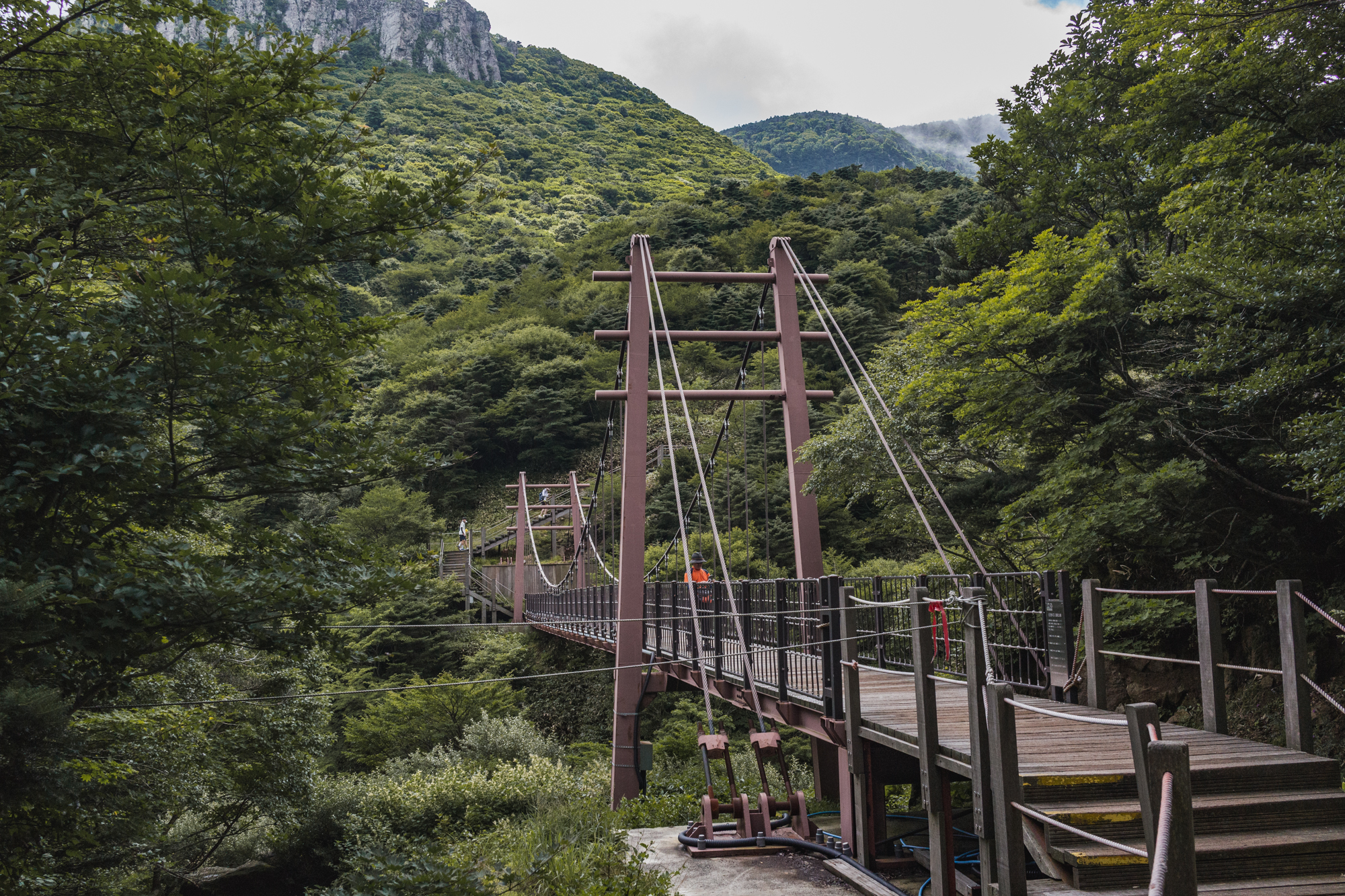 When it comes to traveling, we all have a tendency to exaggerate.

Tour agencies promise you the trip of a lifetime. City governments claim their landmarks to be the “World’s Best”. Restaurants tell visitors that they serve the top dishes for miles. And when travelers retell the stories behind their grandest adventures, they embellish details and gloss over the struggles. The less glamorous bits, like the hoards of tourists at Santorini or the monsoons sweeping through Phuket, are transformed into tales of glorious sunsets and macheted coconuts on the beach.

If you’ve ever had any doubts as to the integrity of my stories, let me be clear: Climbing Mt. Hallasan is really f*cking hard.

Mt. Hallasan is an active volcano (active meaning that it has erupted at least once in the last 10,000 years) that sits in the center of Korea’s darling, Jeju Island. It’s also the highest point in the entire country. Joel and I had planned a quick trip to Jeju as part of our month in South Korea, and readily welcomed the challenge of hiking a 6,400-foot volcano as an extra tick on the old bucket list.

Our journey started with a 40-minute bus ride from Seogwipo to the mountain’s base. There are a handful of trails to choose from for hiking, but only two will lead you to the summit: the Seongpanak Trail and Gwaneumsa Trail. The former stretches nearly 6 miles and is the most common path for visitors to get to the top. The first two-thirds are fairly easy, with the most challenging section being the set of stairs at the end.

Gwaneumsa Trail, at only 5.4 miles, is the more strenuous of the two. And by more strenuous, I mean that you should be prepared to climb 5.4 miles worth of stairs. But I’m getting ahead of myself.

When we first started researching for the trip, I came across several travel blogs that mentioned how most hikers choose to take the Seongpanak Trail up to the peak, and the Gwaneumsa Trail back down. While this option is less physically taxing, it also means that you’ll be stopped behind lines of other tourists who are also seeking the easiest way to the top. Joel and I played out each scenario and decided on the reverse route. This way, we’d be able to appreciate the views in relative solitude. 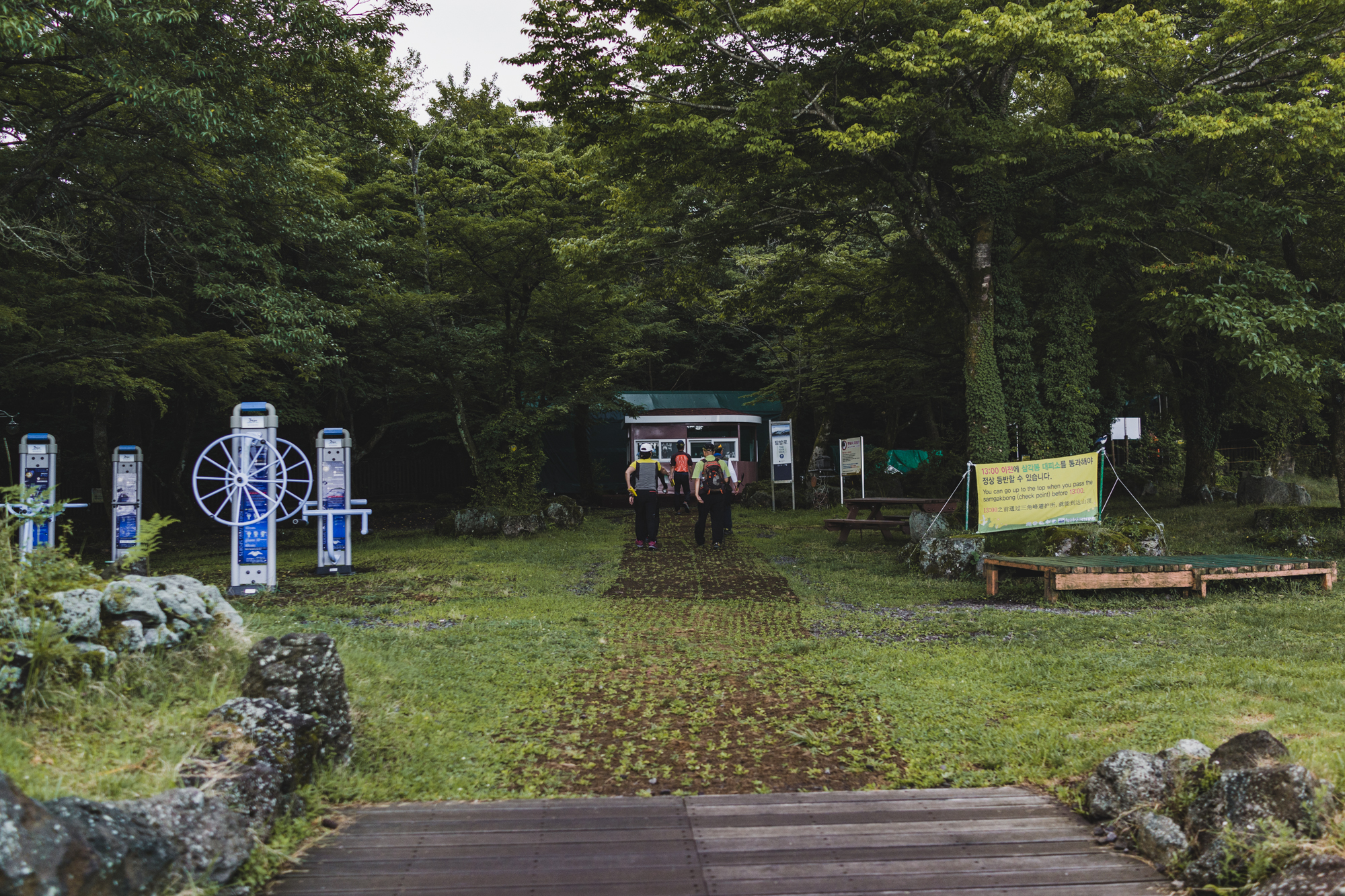 Our journey started with a 40-minute bus ride from our hostel in Seogwipo. Once we arrived at the closest bus stop, we grabbed a taxi and rode the last two miles to the base. We were dropped off at a mostly empty parking lot with a bathroom, a timetable, and a sign pointing to the trail head.

Armed with a small backpack of supplies and a fiery will to succeed, we marched onward.

The beginning of the trail was beautiful. We crossed bridges, walked by caves, and hopped over lava rocks. The heavy shade and lack of mosquitos were also welcome surprises. 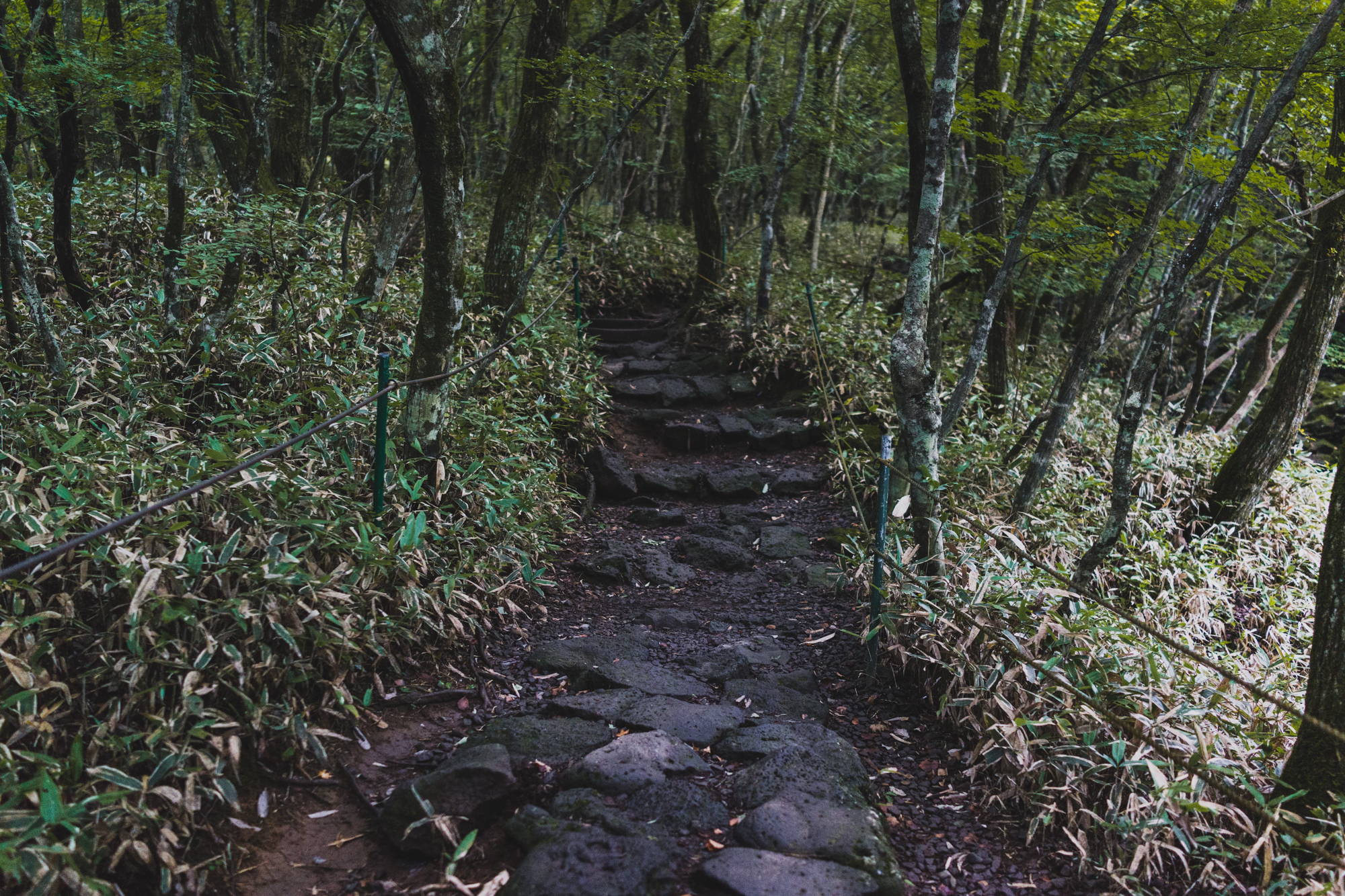 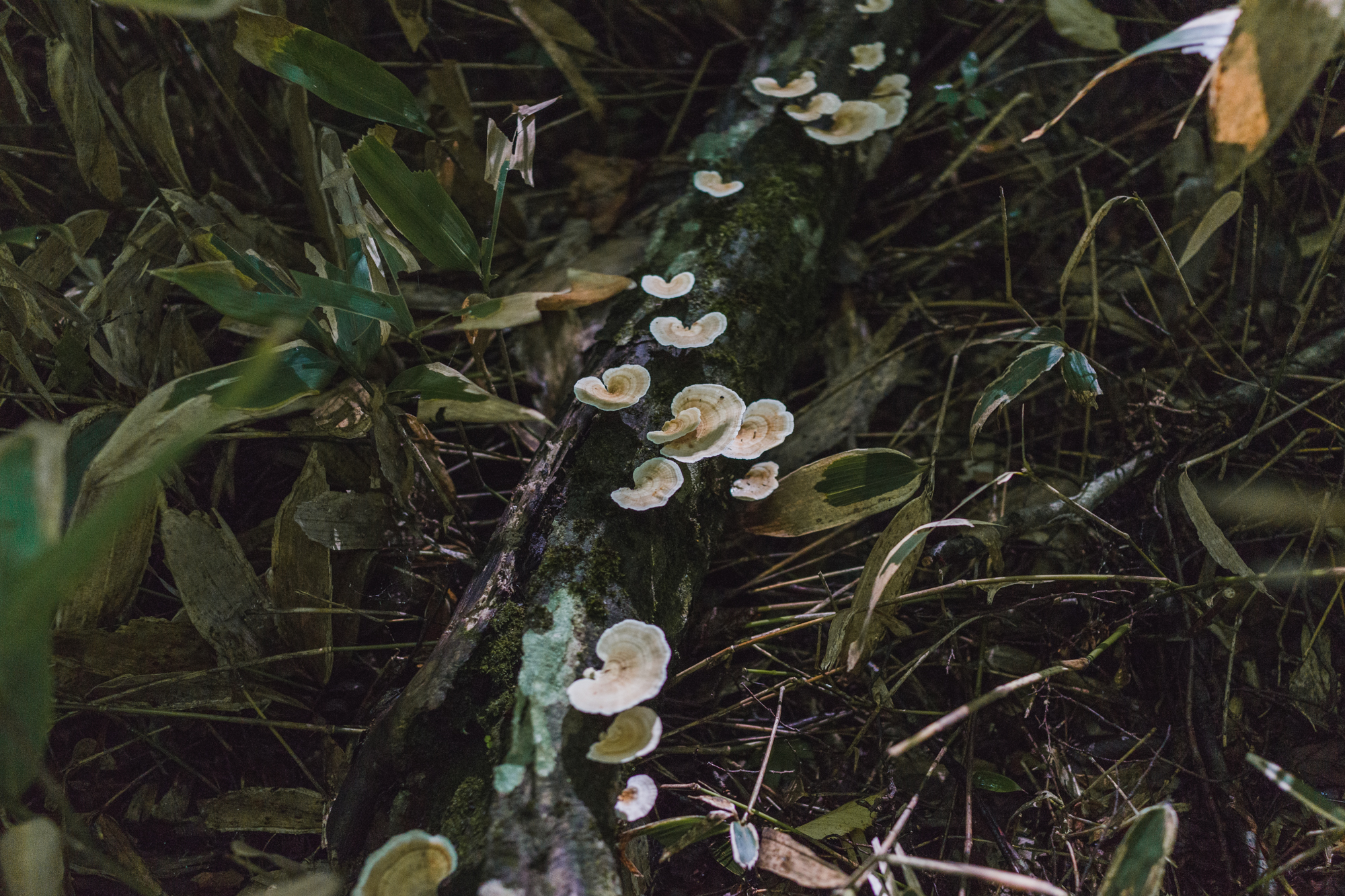 Then came the stairs. 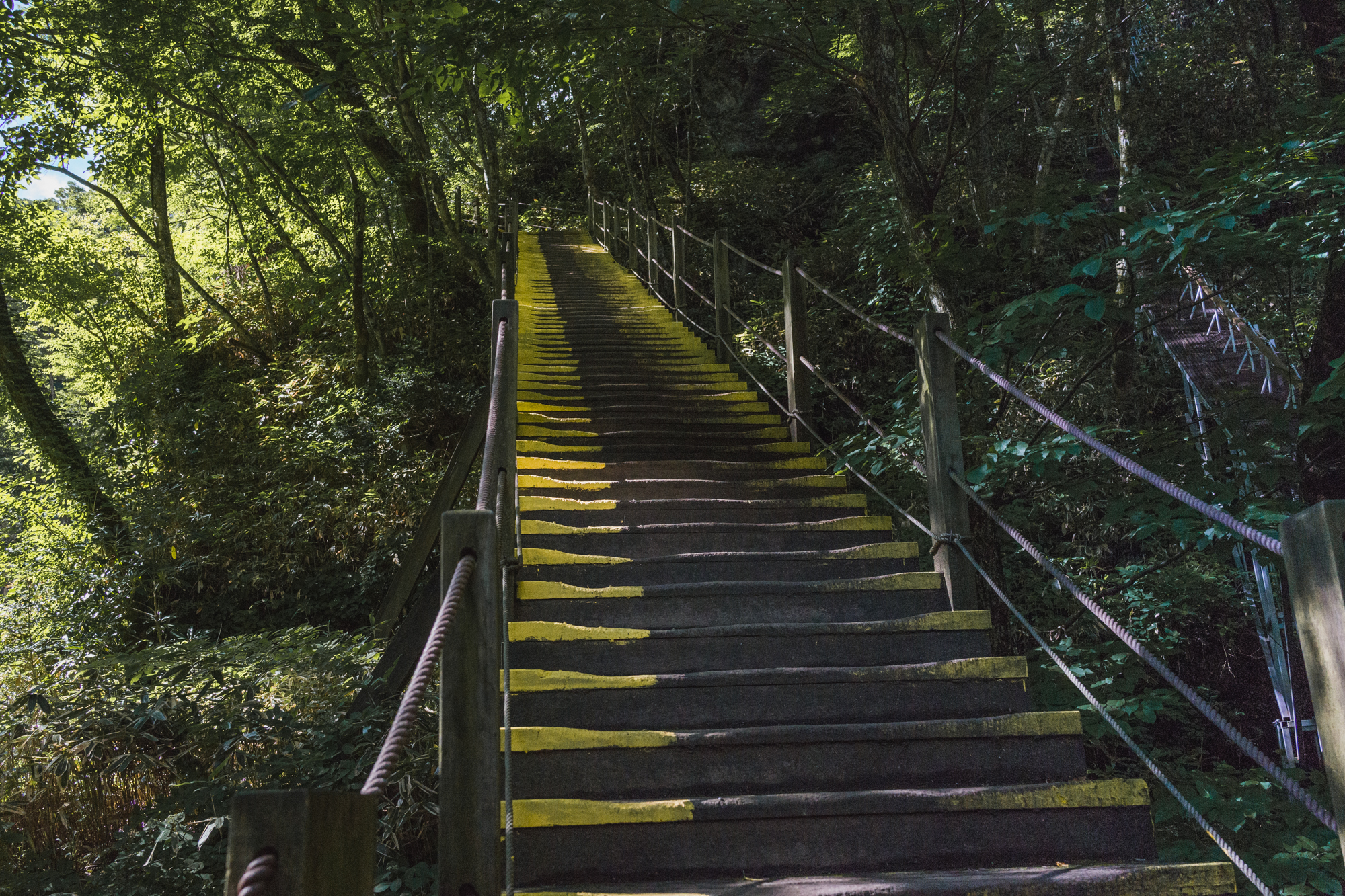 We assured ourselves that the incline would level out at some point. We climbed forward quickly, intent on finding flat land, and eventually found ourselves at a landing with a small group of seasoned hikers. They spoke with Joel in Korean for a few minutes, laughing and gesturing up and down the mountain.

“He says we should turn around now and go up the other way,” Joel translated. Great.

Determined not to give up (we’re really stubborn, can you tell?), we continued up the path. After two hours of hiking, we emerged out of the thick wall of trees. The landscape opened up in front of us, valleys sweeping below jagged peaks, the sky clear and blue. Our bodies were exhausted and our minds delirious (I may have started laughing hysterically half-way up the trail), but we had at least made it to the final checkpoint. 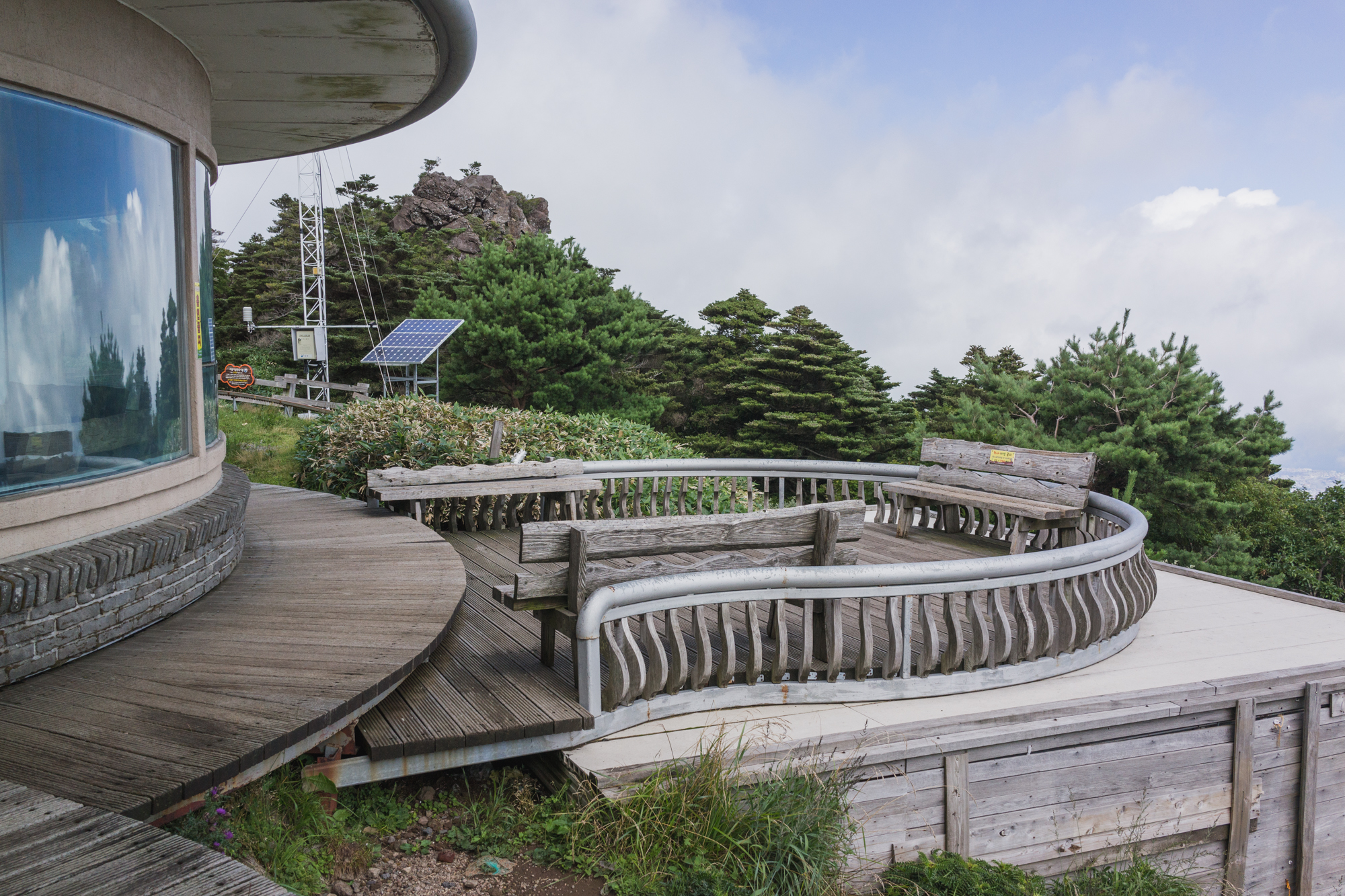 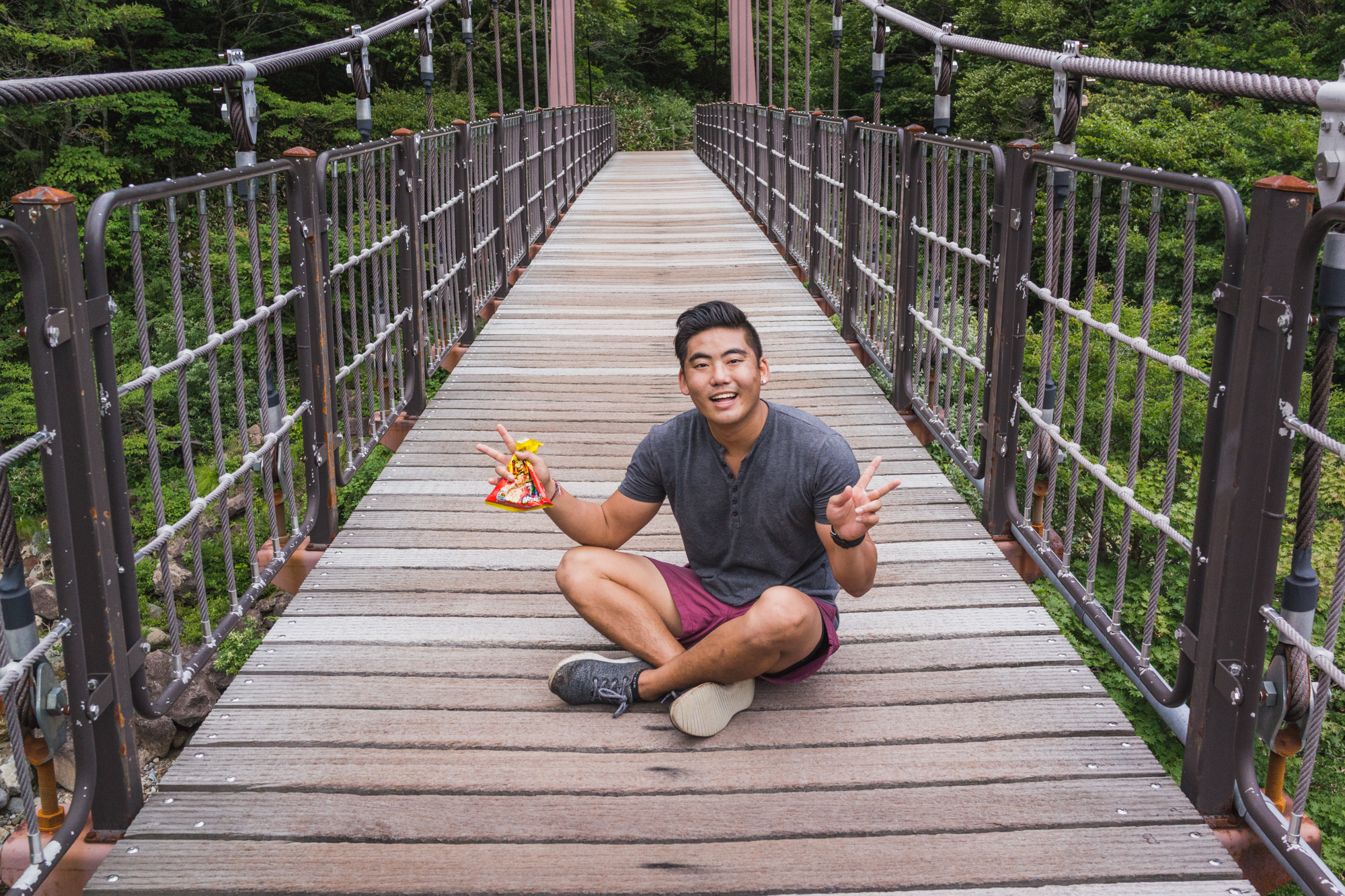 After a quick break, one of the few hikers we had seen all morning started climbing past us on his way down.

“How much longer to the top?” Joel inquired, in Korean.

“Maybe an hour? You haven’t even hit the hardest part yet.”

Had I not already sacrificed two of the most painful hours of my life to this mountain, I would have quit right there and gone back to the hostel. But when you’re nearly 1600 meters above sea level with no cable cars or trams to help you down, you don’t really have a choice except to finish the damn thing.

And so, knees weak and thighs trembling, we made our final ascent.

After nearly 4 hours of the most physically demanding hike (or physical activity in general) that I’ve ever experienced, we finally arrived at the peak. 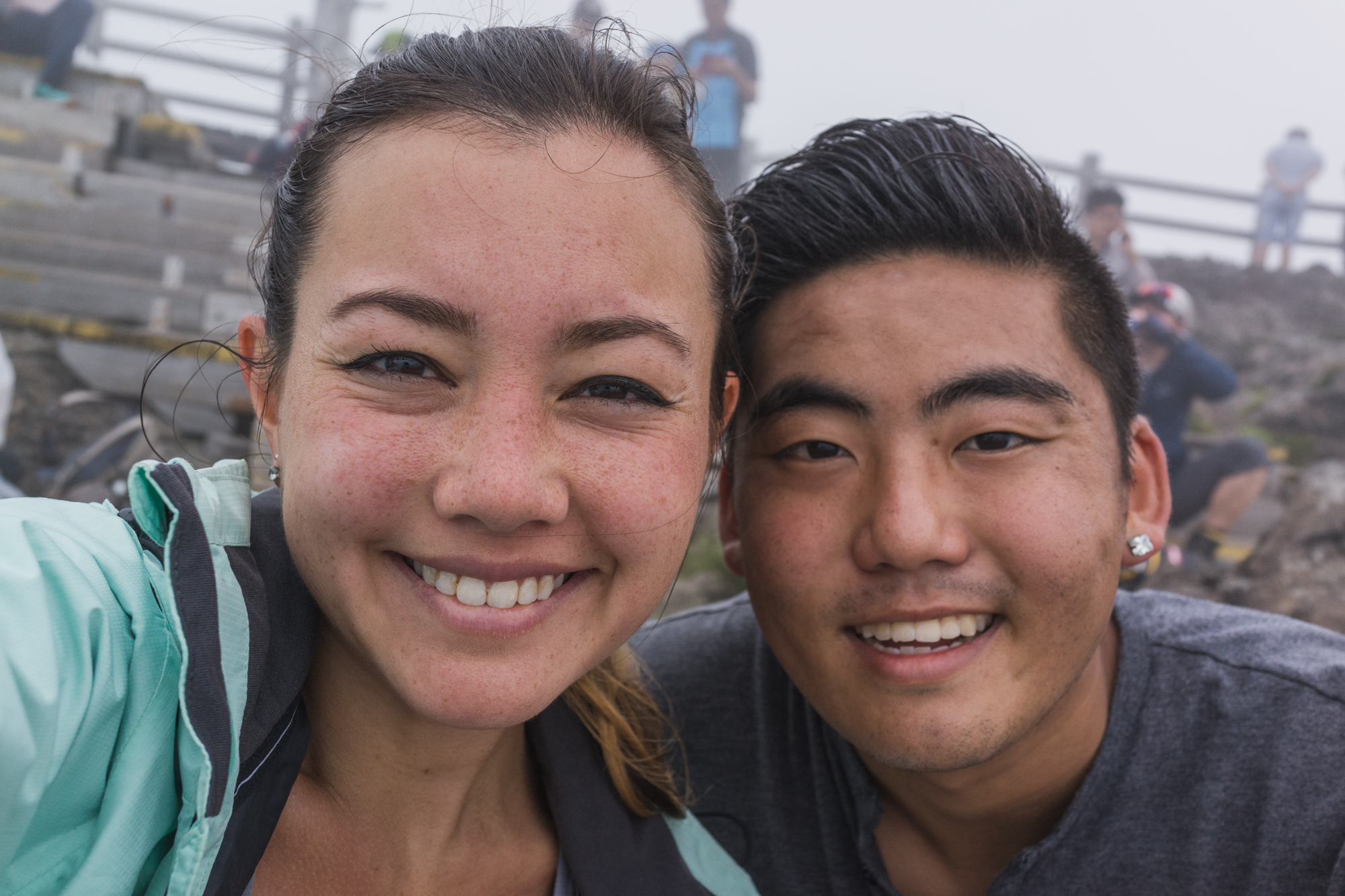 We took a 45-minute break to rest, eat lunch, and wait for the view to clear. Massive clouds drifted through the peak, but were quickly shunted aside by the ravaging wind. Mt. Hallasan’s famous crater appeared, and next to it, a soaring view of Jeju.

Descending on the Seongpanak Trail

We descended back down the mountain, taking the so-called easy trail. It turns out that while Gwaneumsa is mostly stairs, Seongpanak is all rocks. Rocks are okay for going uphill. Downhill? Not so much. While my heart was no longer on the edge of exploding, my feet were starting to swell with blisters and bruises.

Finally, 7.5 hours later, we sprinted out of the forest and into the parking lot, as far away from the edge of Mt. Hallasan as possible.

I turned to Joel and gave him a celebratory high-five. “Let’s never do that again!” I cheered.

Getting to Mt. Hallasan:

To get to the Seongpanak trail head, take the 782 and get off at the Seongpanak bus stop. It drops you off right at the beginning of the hike. The journey is 35 minutes from Seogwipo and 25 minutes from Jeju City. If you’re trying to start at Gwaneumsa instead, you’ll also take the 782, but get off at Gwaneumsa Temple. The bus takes about 40 minutes from Seogwipo and 10 minutes from Jeju City. From here, you have three options. Most people choose to walk an hour to the start of the trail from this point, but I suggest grabbing a cab like we did. It only costs ₩3600 and your legs will thank you. Your final option is to wait for the 77 bus, which comes every half hour.

1. Don’t try and be a hero. Hike up Seongpanak and down Gwaneumsa like 99% of the other sane people who visit Jeju. You’ll get to experience two different views and you’ll be able to get out of bed the next day.

2. BRING SO MUCH WATER. And snacks. Lots of snacks. We only brought a liter up with us (because who wants to carry more than that up thousands of stairs) and it was a big mistake. There’s only one water refill station on the Gwaneumsa Trail and it’s a sketchy basin with a small hose. The Seongpanak Trail is much better stocked: the final checkpoint, Jindarraebal Shelter, sells ramen, water, chocolate, coffee, and rain gear. While we were starving and dehydrated over on the north side of the mountain, casual hikers were slurping noodles and napping lazily in the sun.

3. Plan for an all-day hike! South Korea’s tourism site estimates an average of 8-10 hours spent per trip. We did it in 7.5 hours (including 45 minutes resting at the top), but I suggest giving yourself more time for breaks if you don’t want to hate yourself like we did.

4. There are cut-off times for both ascending and descending. You must start the hike at latest by 12pm, reach the Jindarraebal Shelter by 1pm, and descend by 2:30pm.

5. The mountain has a relatively cool climate, even in summer. Shorts are fine for the majority of the hike, but I suggest bringing a jacket for the top. It gets really windy. You can wear sneakers (we did), but you’ll be more comfortable on the way down if you’re in hiking boots.

If you enjoyed reading about our journey up Mt. Hallasan, make sure to subscribe for more post updates!