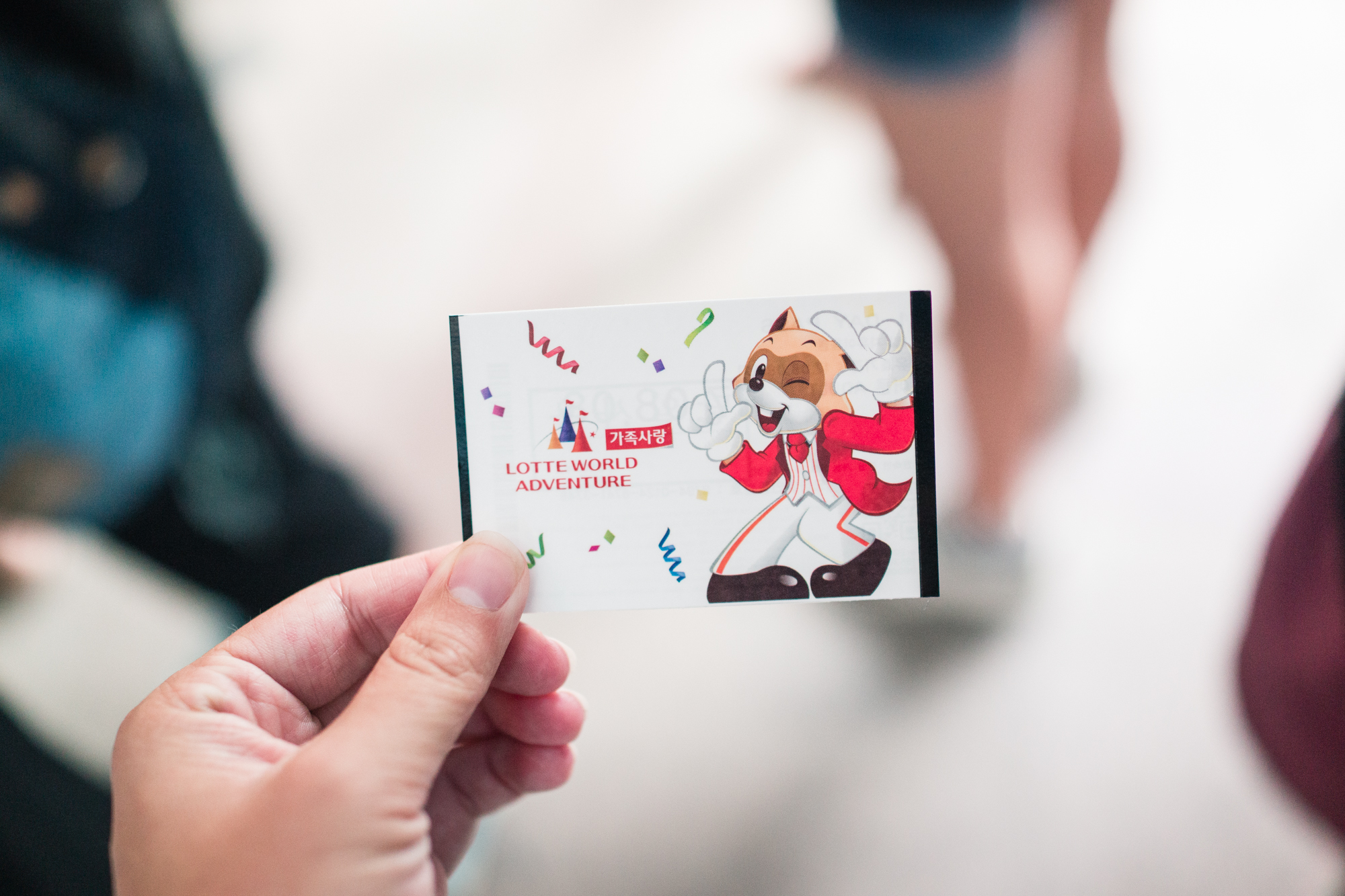 South Korea may not have its own version of Disneyland like its neighbors, but they do have the next best thing: Lotte World! The theme park and its surrounding facilities boast rides, shops, restaurants, an ice rink, a movie theater, parades, performances, a museum, a wedding venue, a lake, a hotel, a spa, VR games, and even its own knock-off of Disney’s iconic princess castle.

Lotte World is divided into two areas: Magic Island and Adventure Park, with the latter holding the Guinness World Record for the largest indoor amusement park in the world. Lotte Tower was also completed this past April, soaring over Seoul as South Korea’s tallest building and providing park goers numerous shopping (and lobster eating, but we’ll get to that later) opportunities in the mall next to it. 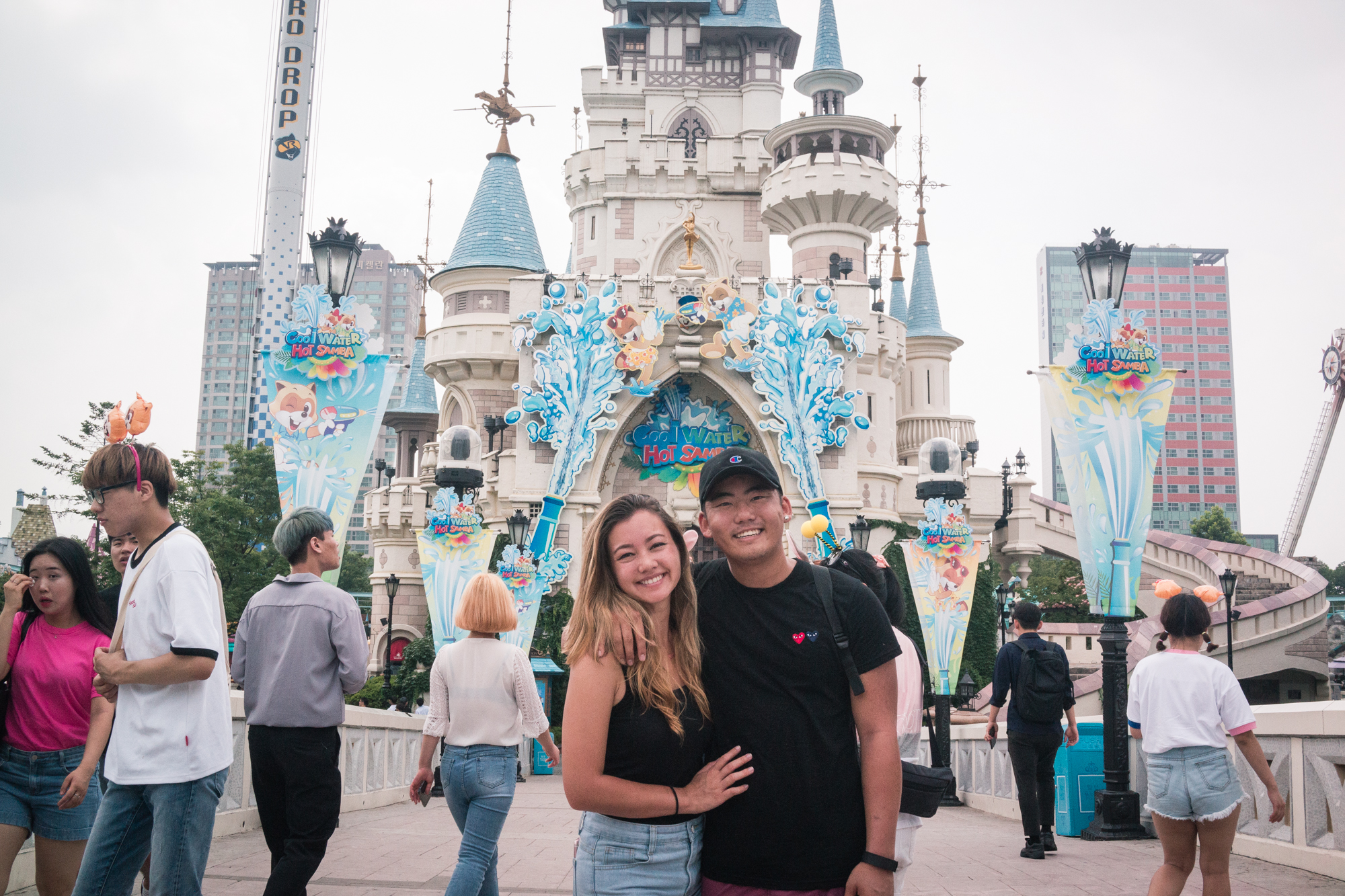 We started our “Lottextravaganza” on Magic Island, where most of the “big kid” rides are located. Joel and I sprinted alongside a hoard of middle schoolers and Korean couples (even for Tuesday morning, the place was packed) to be the first in line. Except that we didn’t really research any of the rides, so we ended up in the middle of the park without a clue as to what we wanted to do first.

We ended up at Comet Express, an indoor roller coaster similar to Disneyland’s Space Moutain, except that you’re seated in individual cars that spin a full 360 degrees. 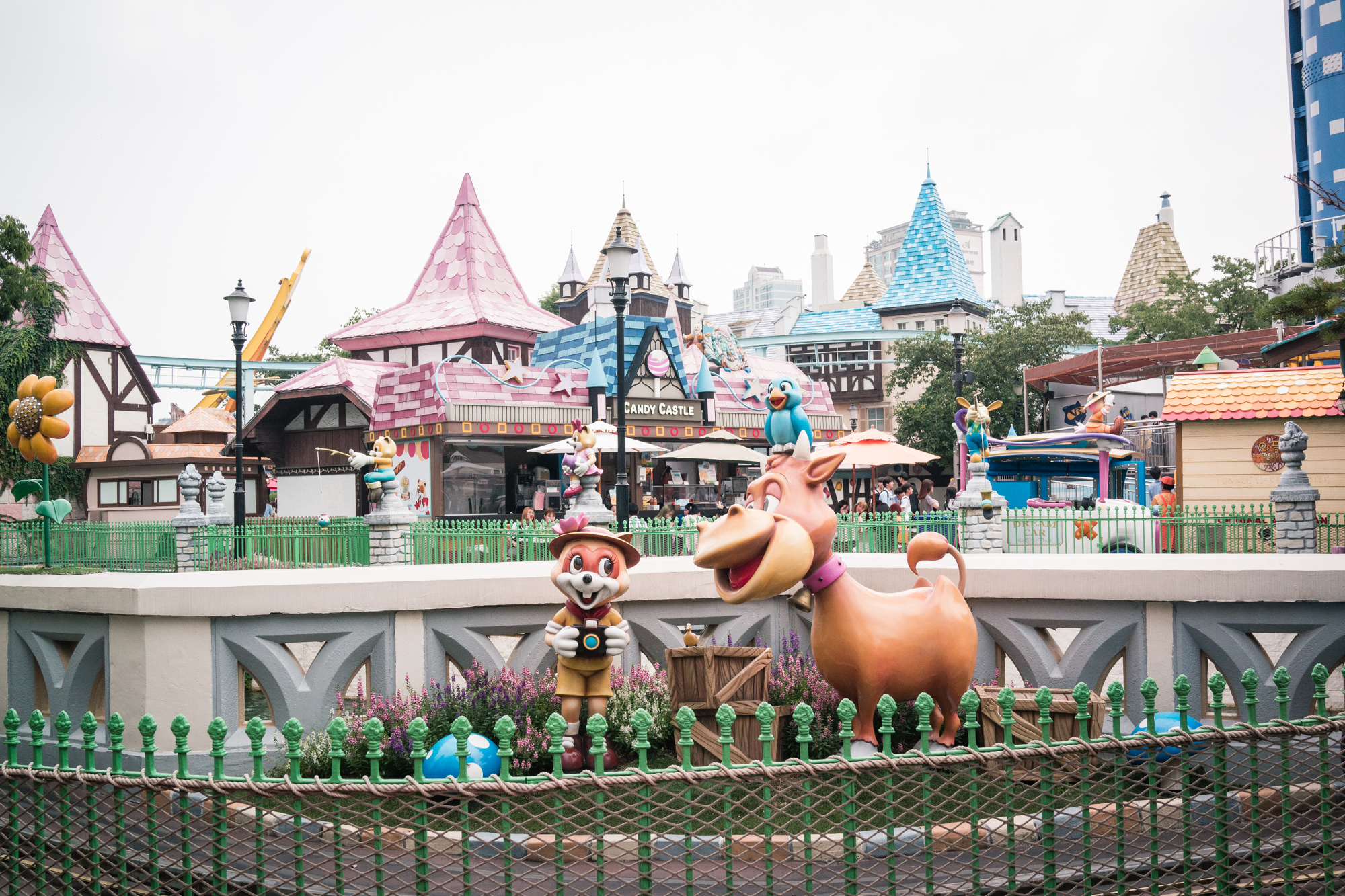 Next, Joel dragged me to Gyro Swing (I’m not exactly a thrill seeker). We were seated in a spinning circle that swung back and forth like a pendulum, offering alternating views of the sky above and the park below. I was crying and laughing hysterically by the end, but it was fun. I think.

As we explored the grounds, we discovered a ramp by the lake that was completely empty. It looked like a ride with no lines. Sweet! We investigated further and found out that it was called Lord Nelson’s Armada, a fancy name for peddling swan boats. This was definitely the least blood-curdling ride of the day, but it did offer nice views of Seokchonhosu Lake.

After getting lucky with Gyro Swing, Joel apparently thought he could talk me into riding Gyro Drop. Wrong. Wrong wrong wrong.

He had a great time on it alone! 🙂

Next was Gyro Spin (yes, Lotte really likes naming things Gyro and no, I don’t know why), a smaller version of its swinging brother that twirls its riders along a shallow arc.

The premise of Lotte World is actually kind of genius. All of the too-large-for-life attractions remain outside, while the rest of the park is protected indoors year-round. Whether it’s rain, snow, or sweltering heat, there’s never a reason not to visit.

In our case, the humidity was beginning to grind us down, so we crossed the bridge into Adventure Park for lunch.

The food was surprisingly cheap. Not dirt cheap of course, but at least on par with the rest of Seoul’s daily living costs. There are loads of options for every budget and taste: typical fair food like corn dogs, caramel popcorn, and bunny-shaped cotton candy, as well as more traditional Korean dishes. There are also quite a few chains that I recognized from back home, including TGI Friday’s, Panda Express, and Dippin’ Dots. 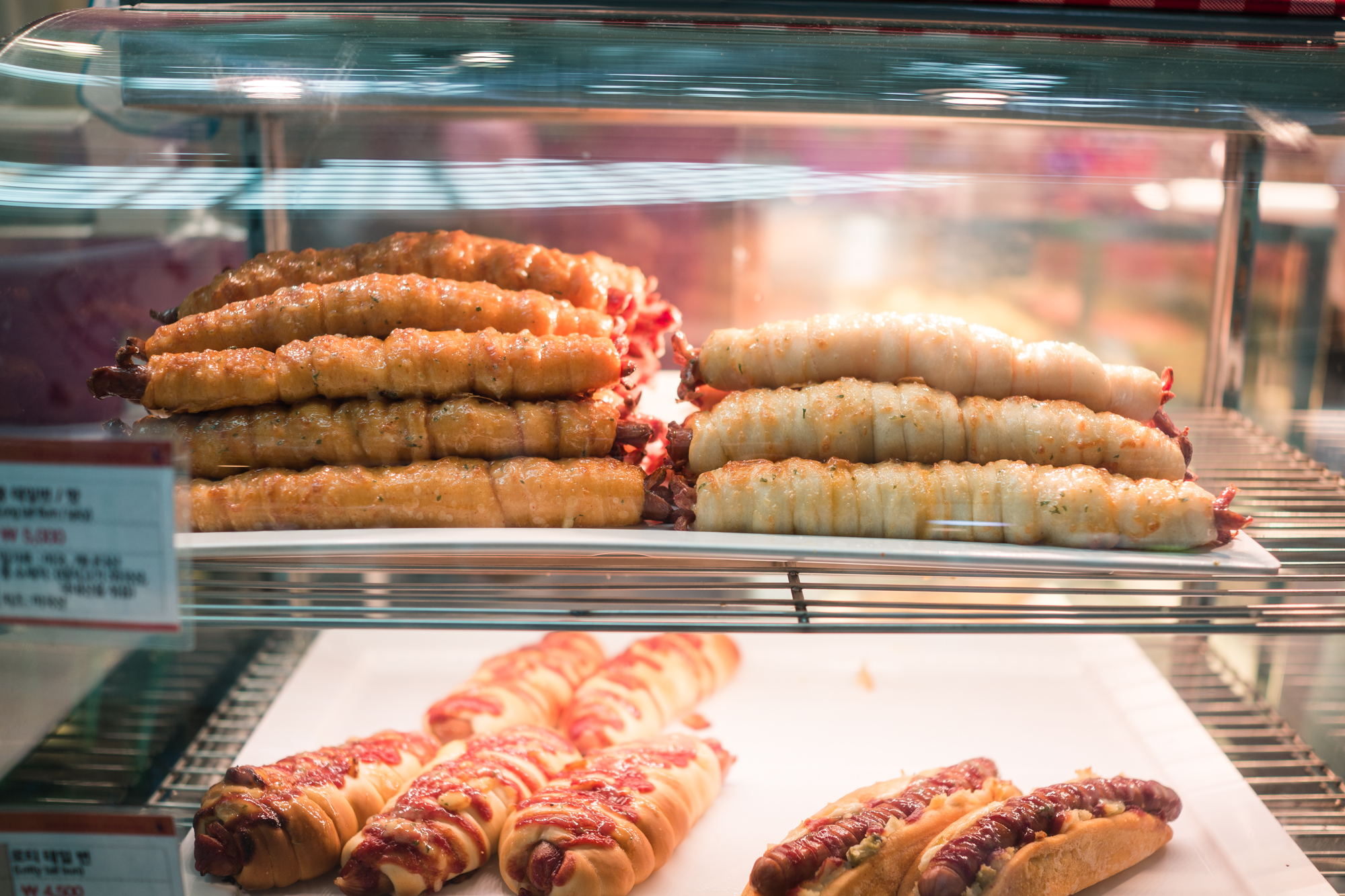 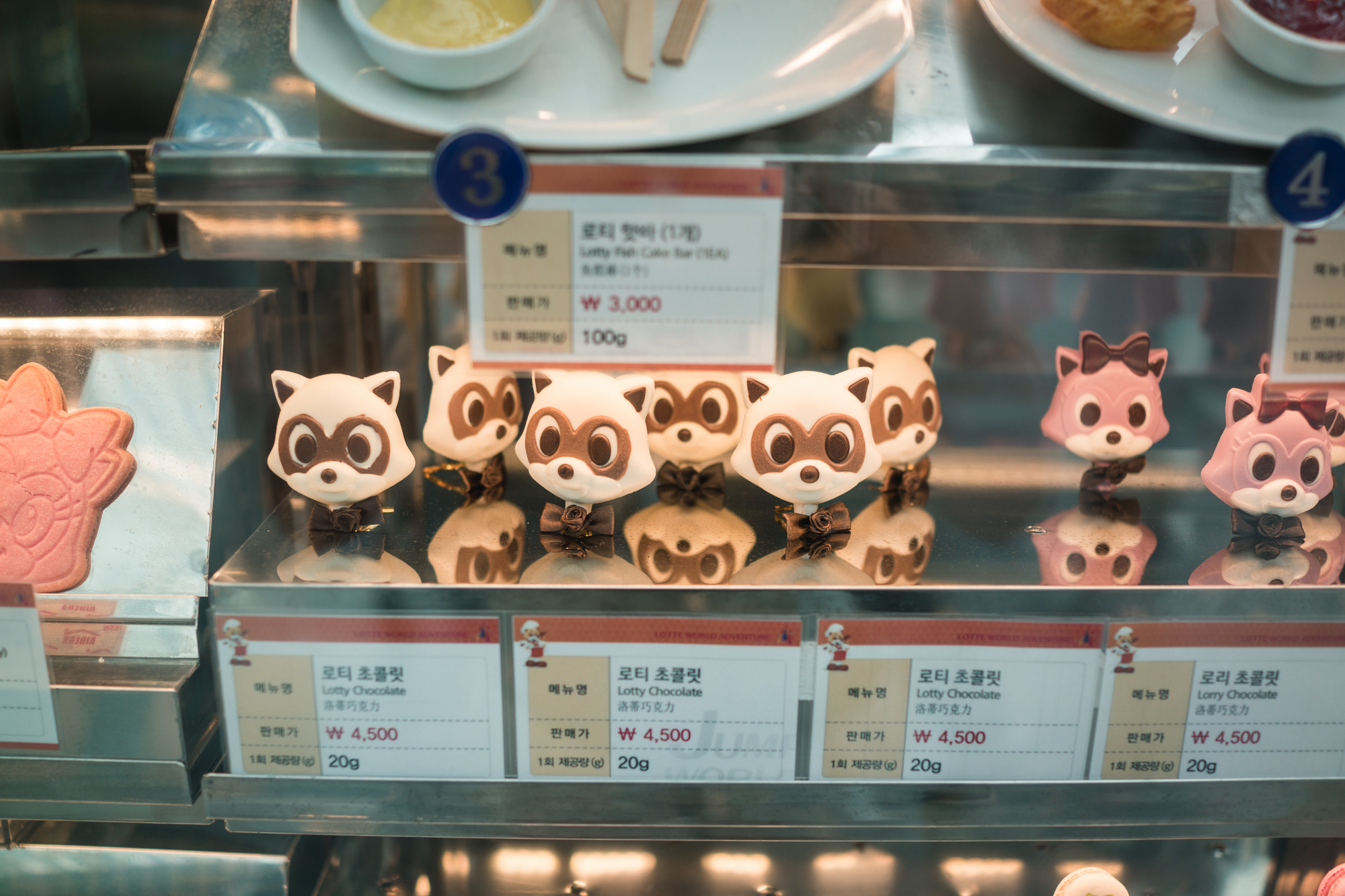 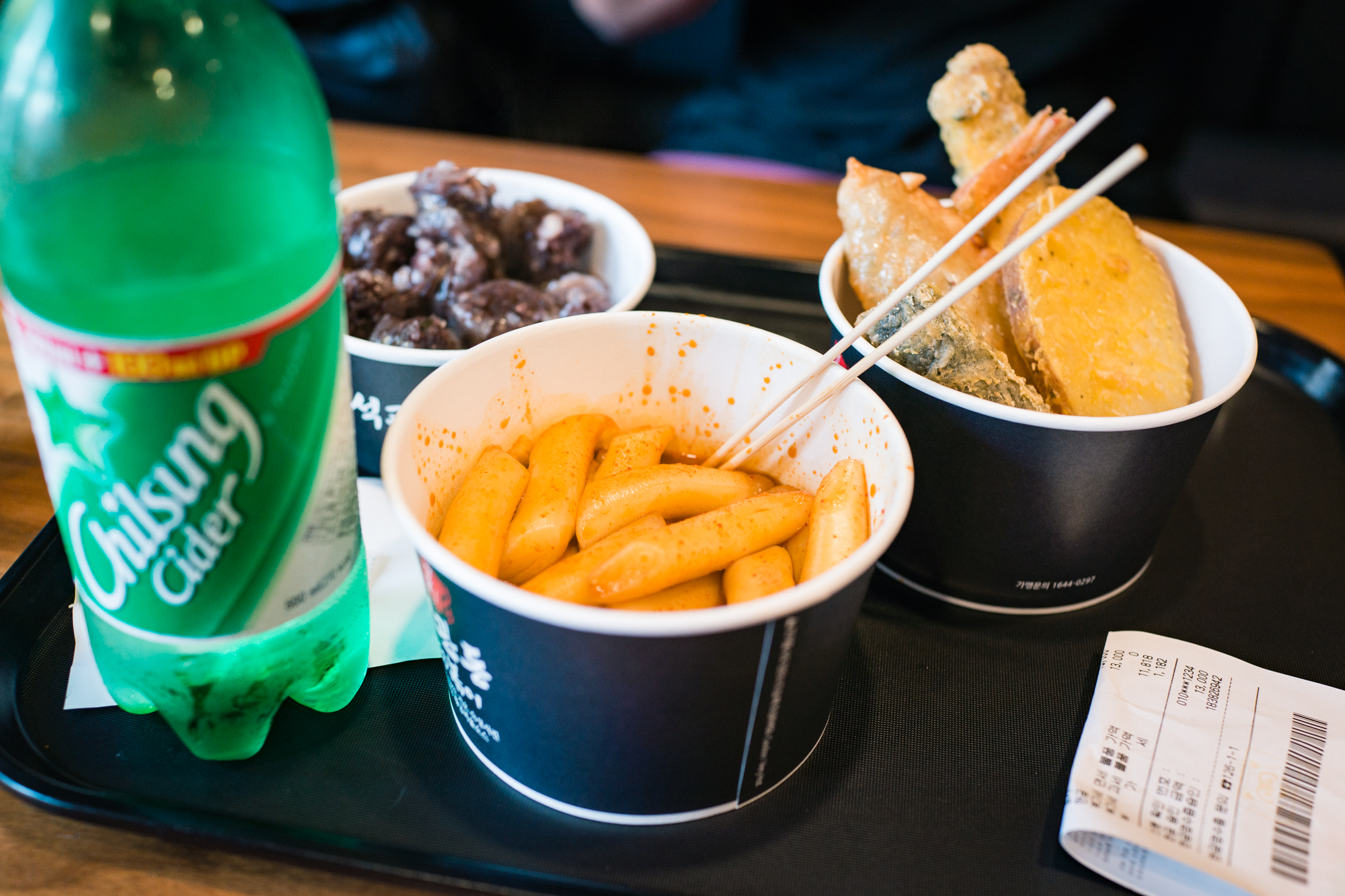 We settled on a milk tea slushie from Gongcha and a combo bowl from Suk Dduk, which included tteokbokki, sundae, and tempura.

After eating, we checked out all of the shooting games: 4D Shooting Theater (I placed 3/35!), Desperado, and Dragons Wild Shooting. The first two were theater attractions and the last was similar to Astro Blasters in Disneyland (honestly, every ride we experienced throughout the day was some Disney rip-off of one kind or another, but I’m not complaining). 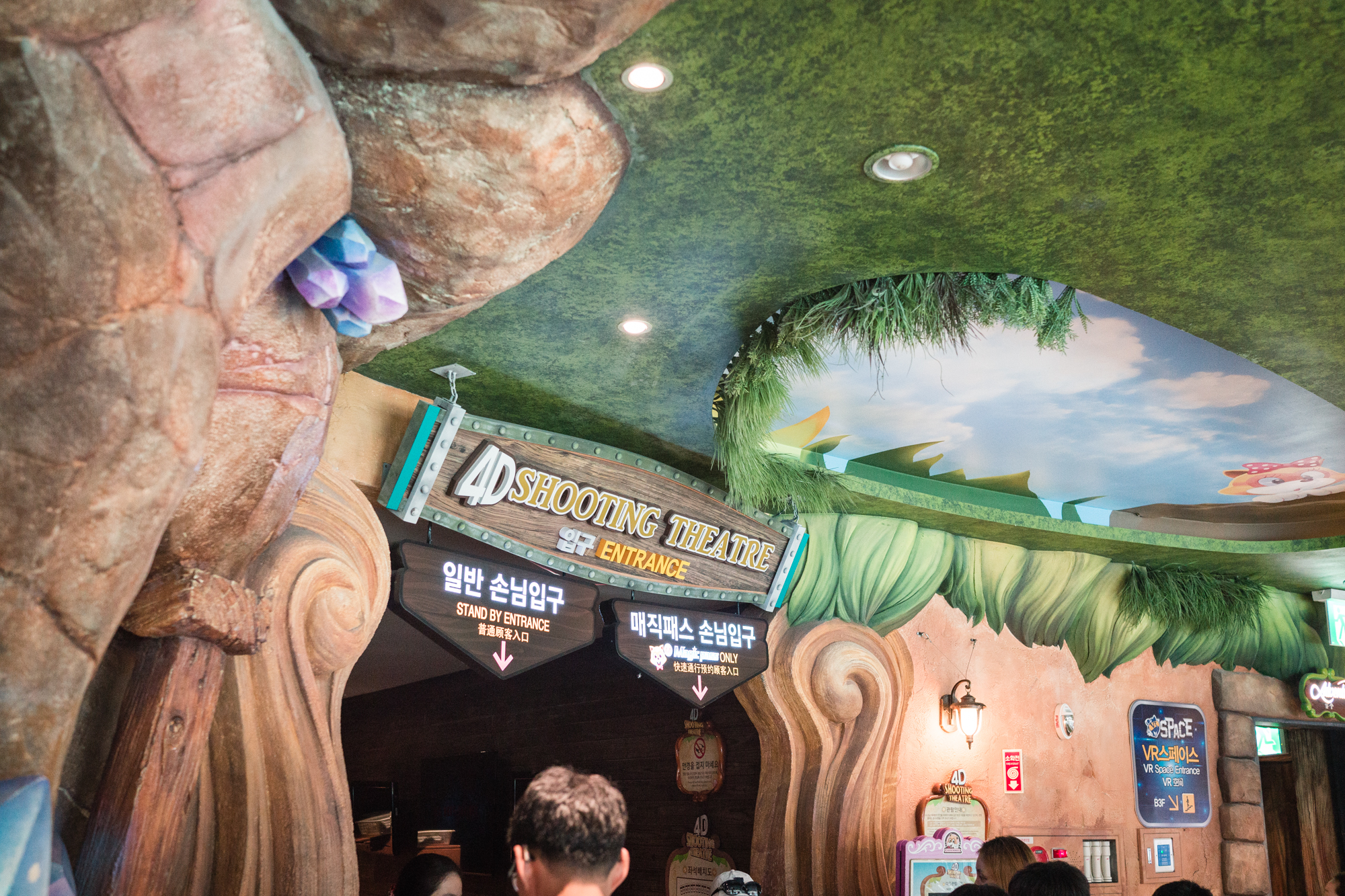 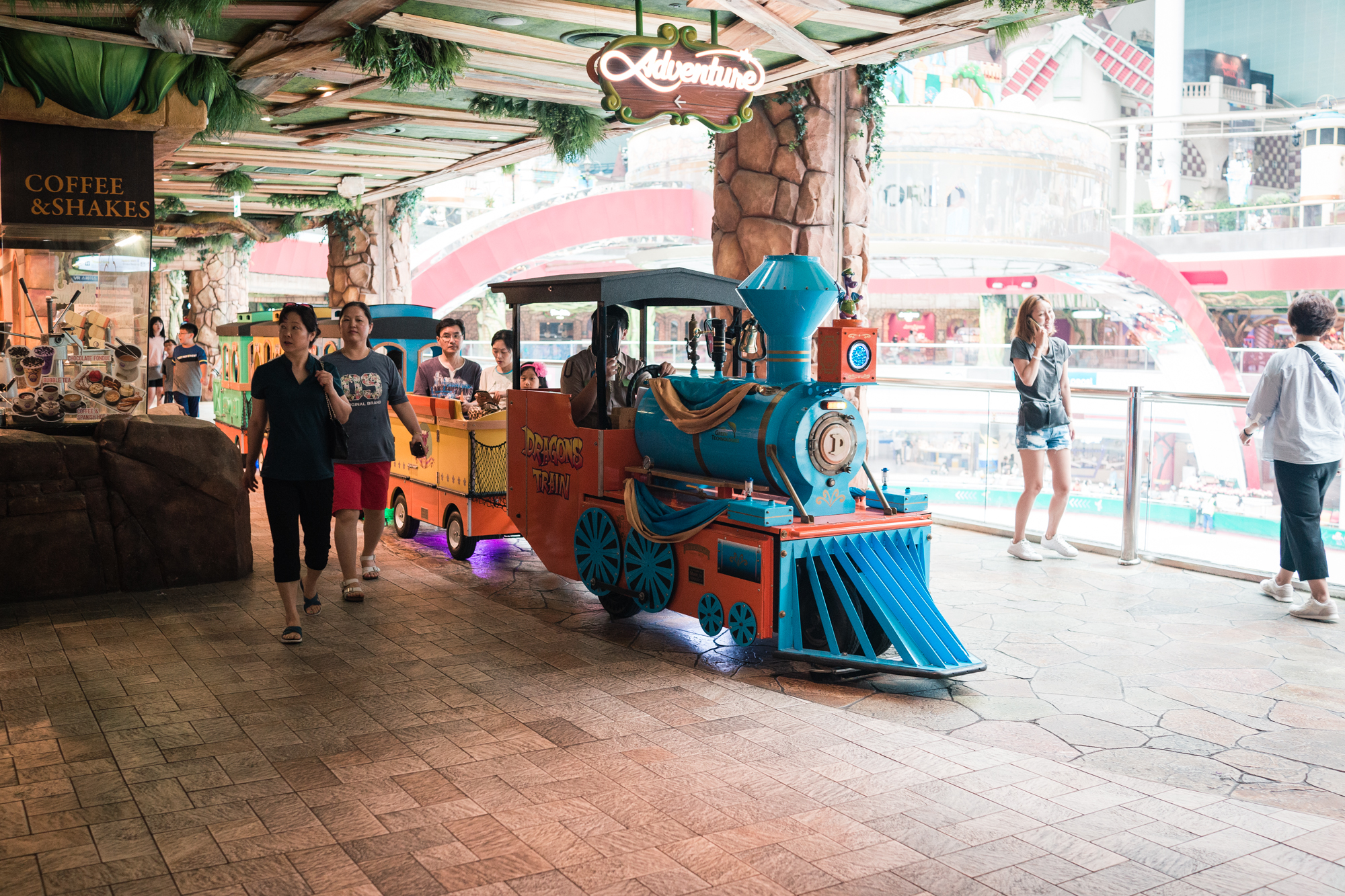 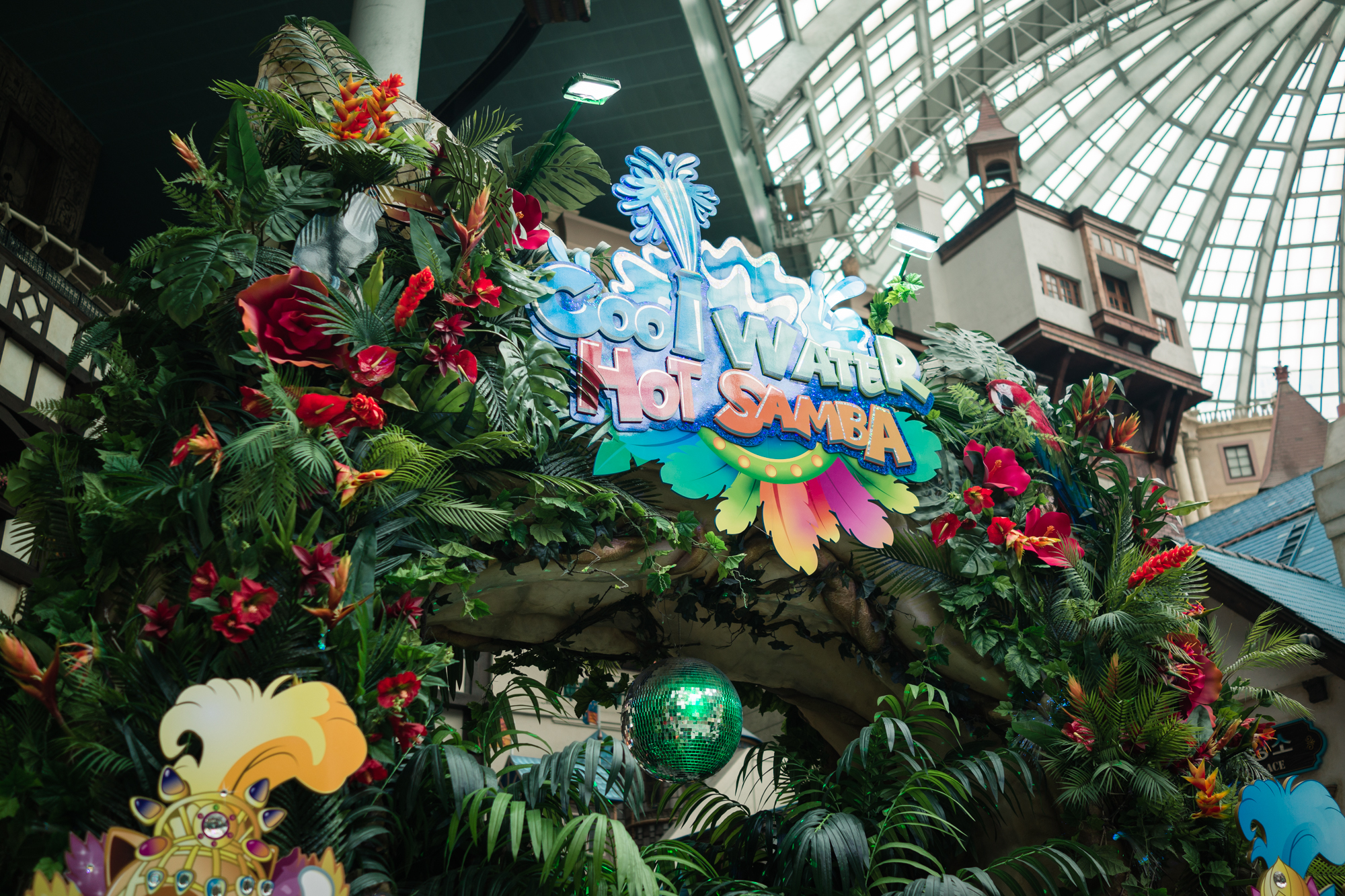 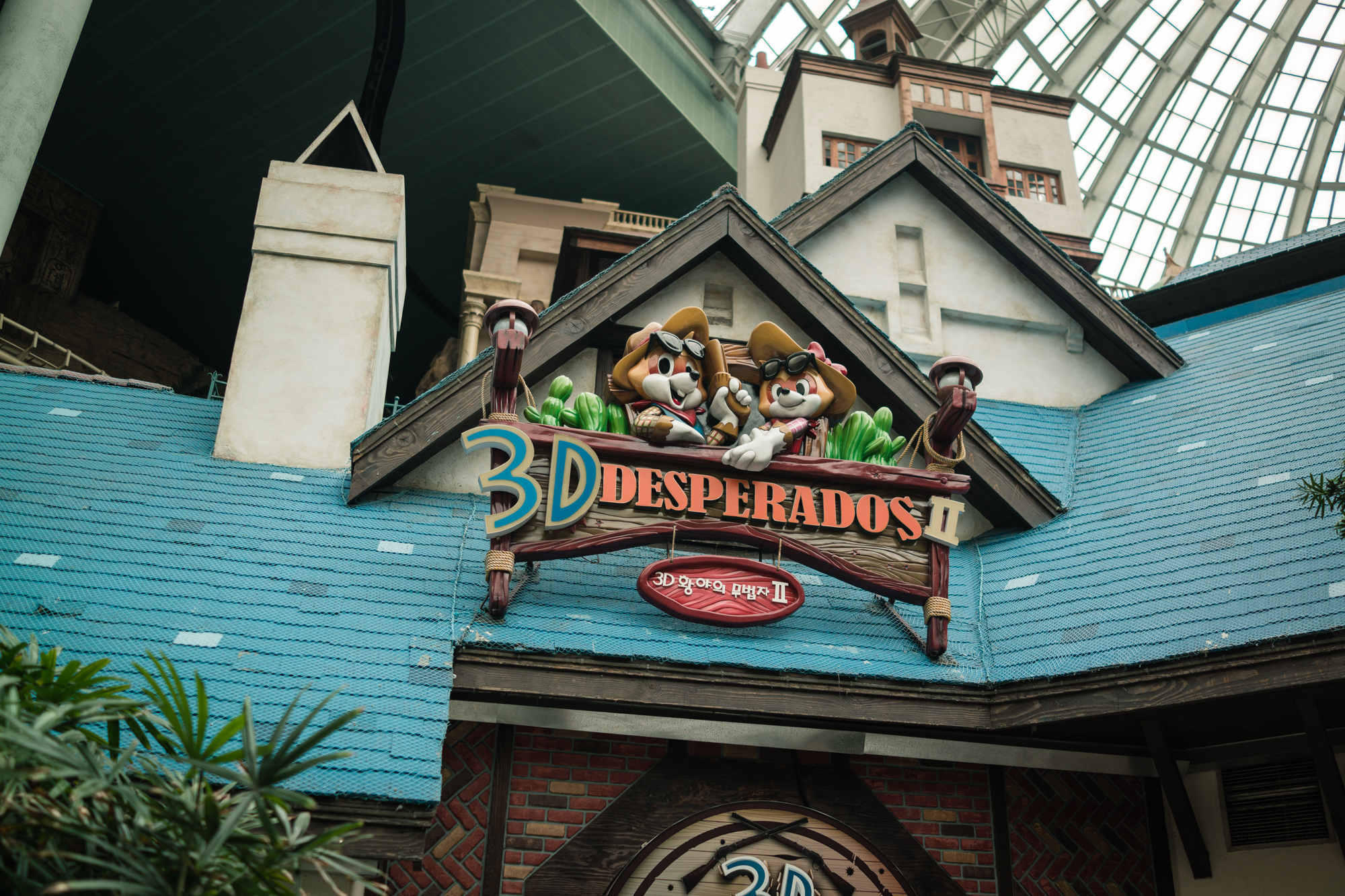 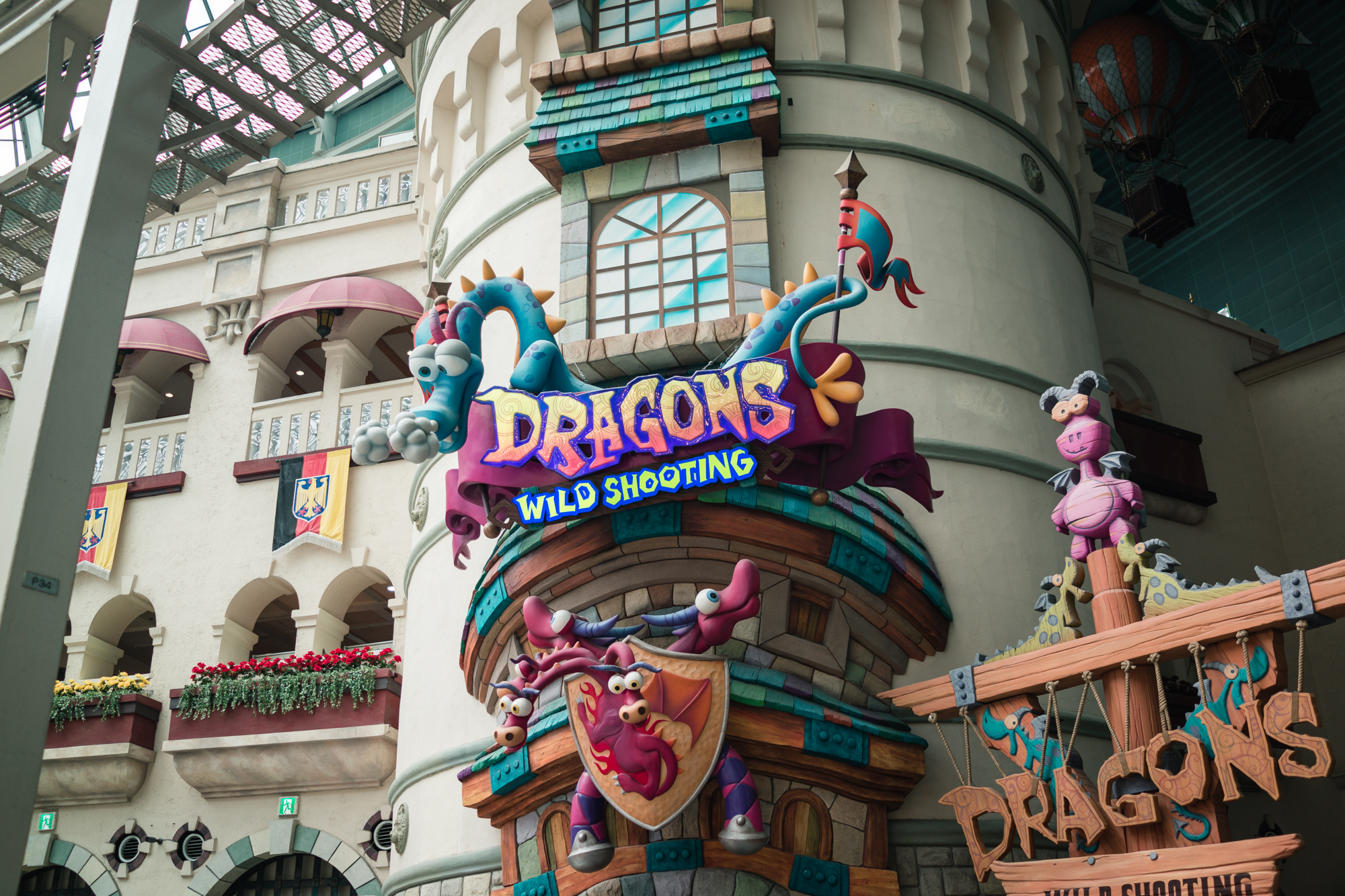 My favorite ride of the day came next: Drunken Baskets! It was your typical tea-cup ride, except that the entire platform tilted back and forth. The cups also spun so freaking fast. The g-force was so strong that I couldn’t even lift my arm to get my phone out of my back pocket. Joel hated it, I loved it. 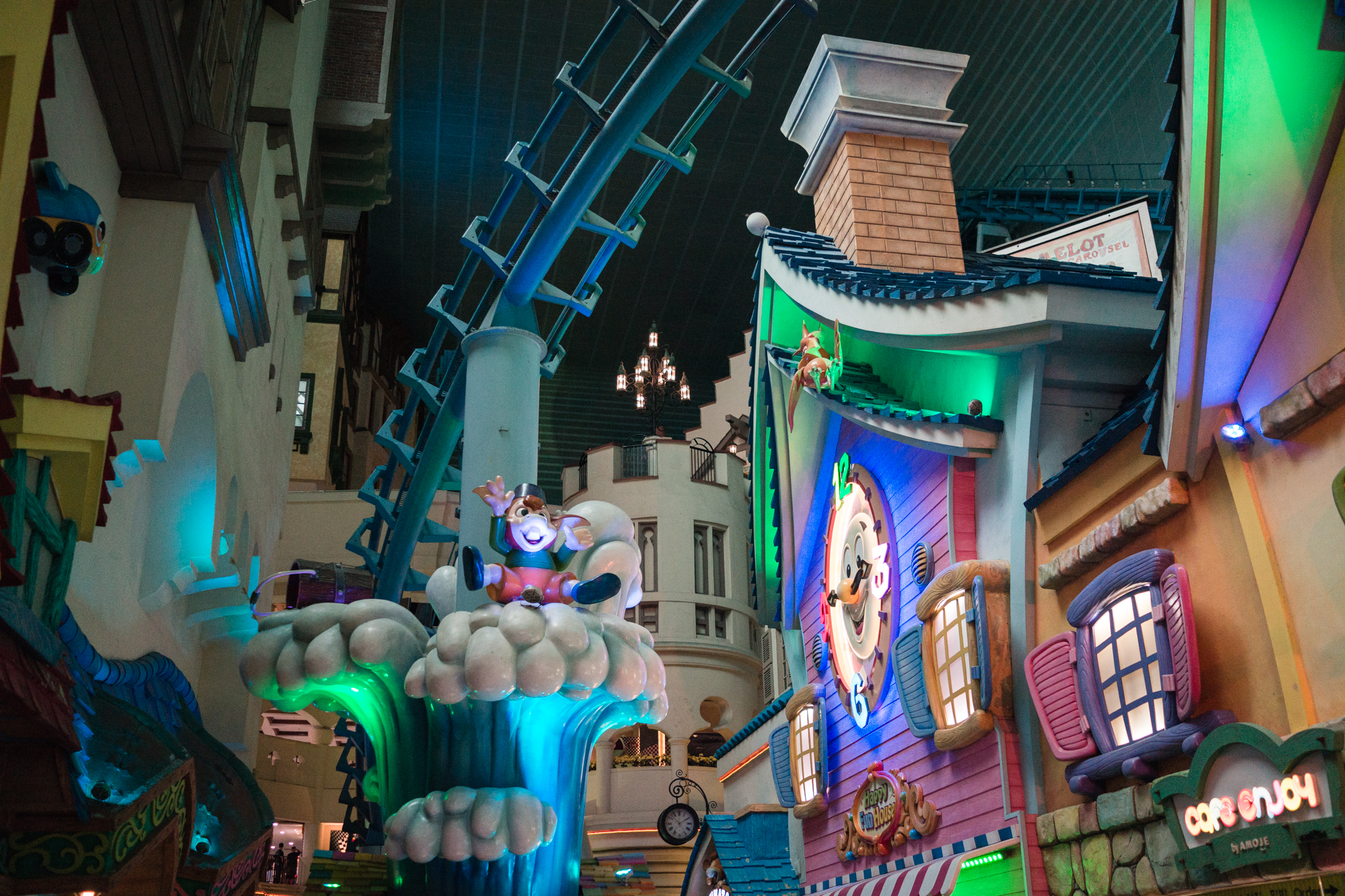 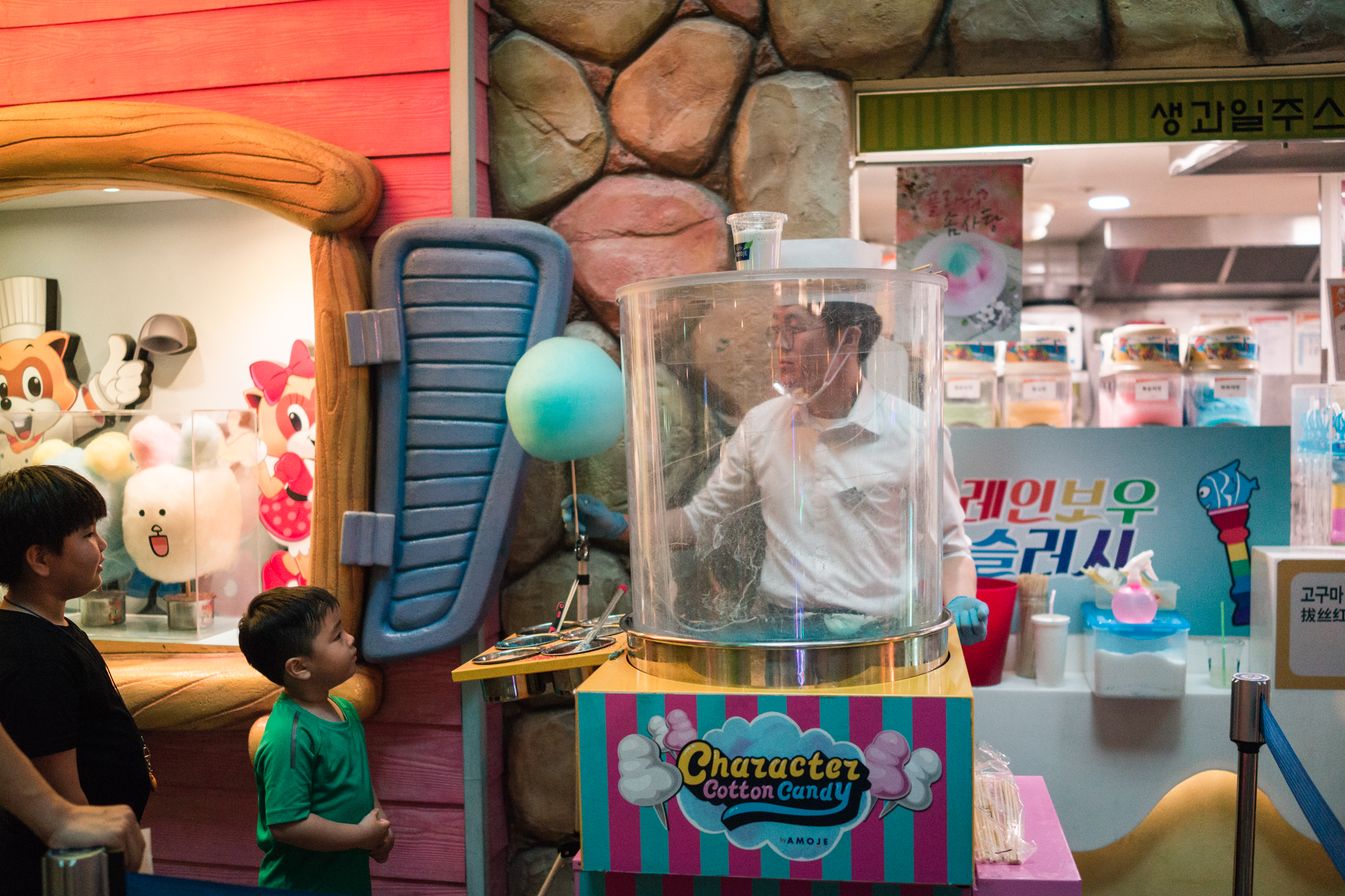 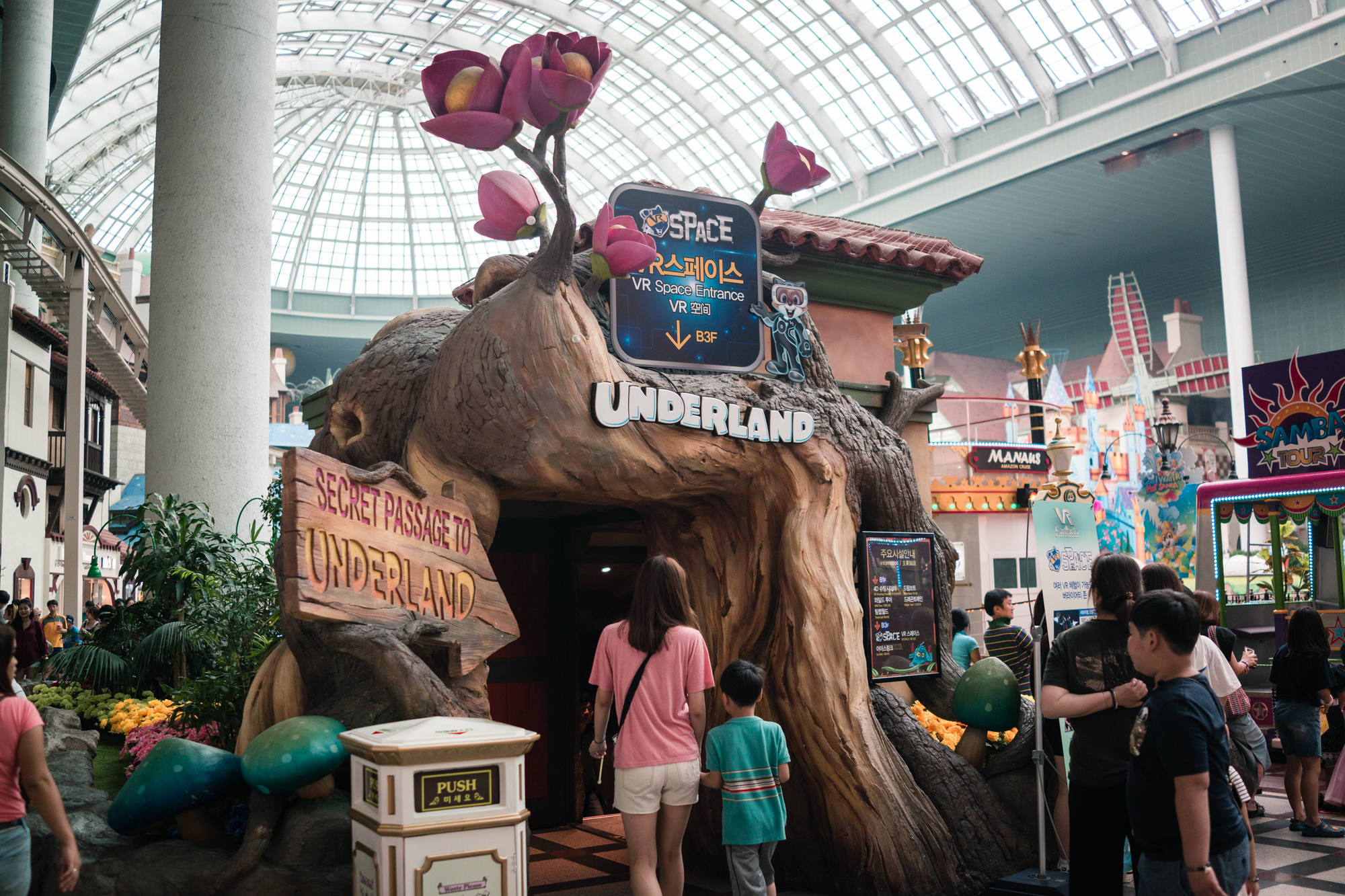 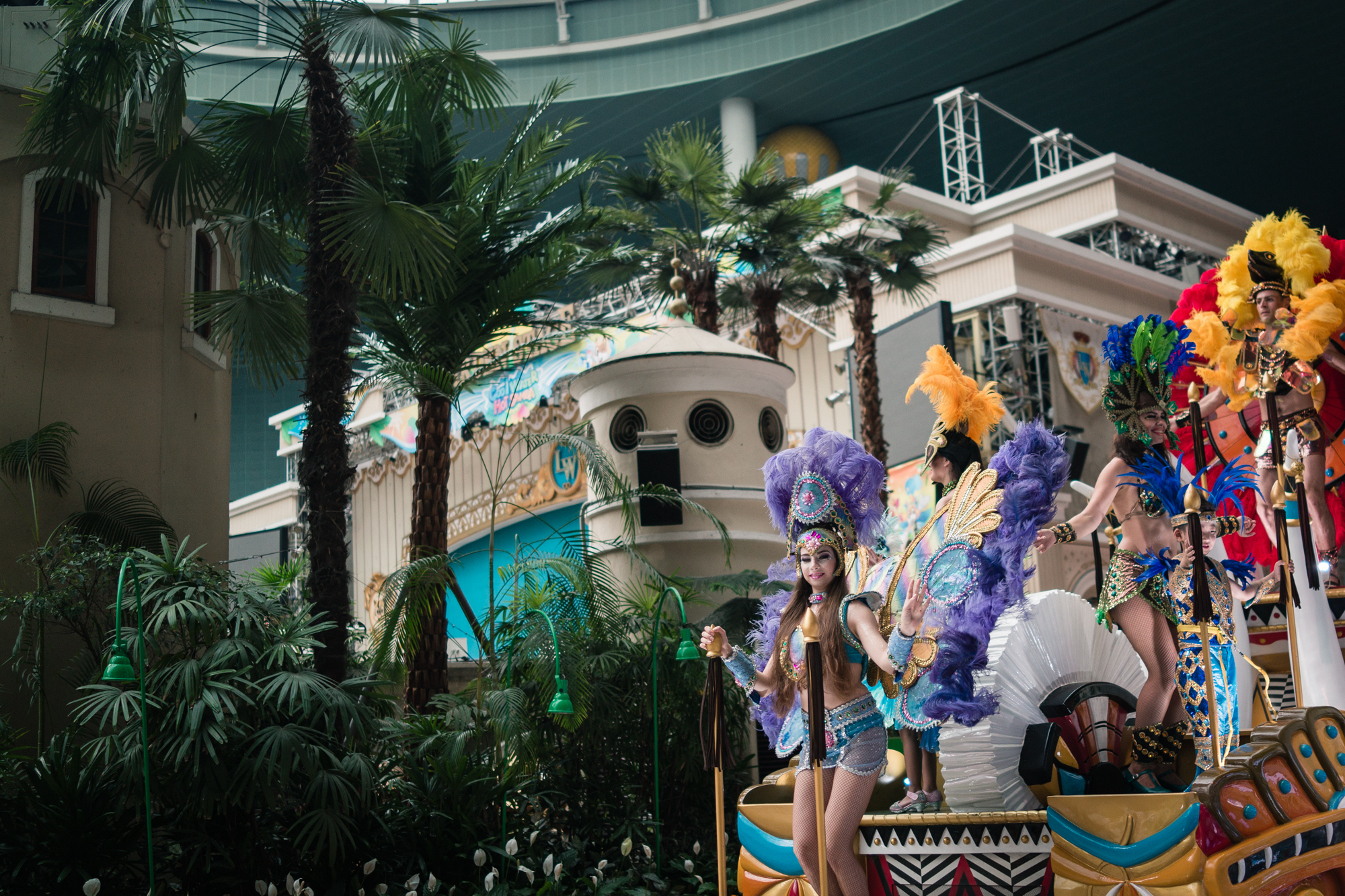 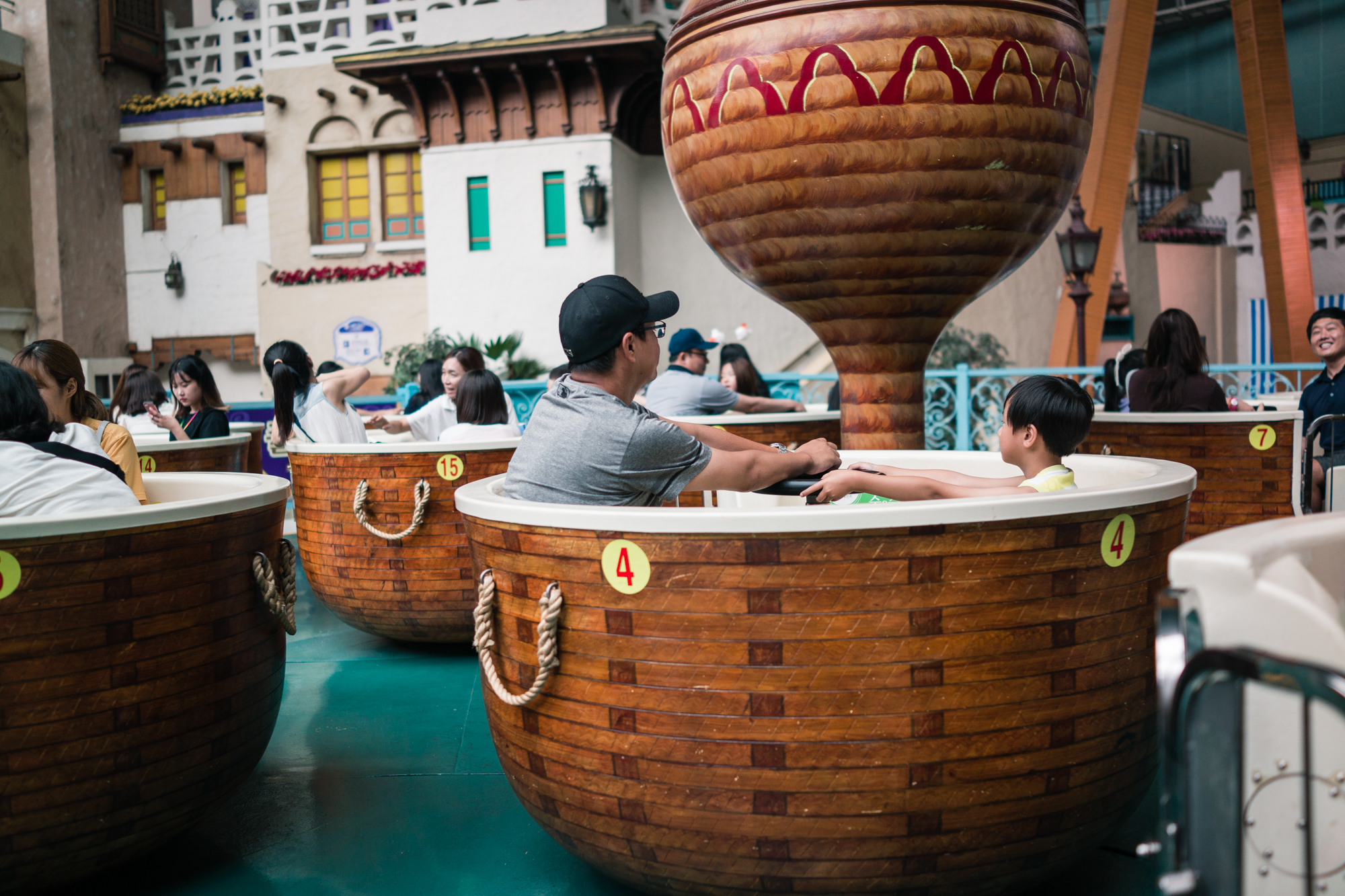 We also tested out Jungle Adventure, which turned out to be an indoor, whitewater rafting course. We followed with The Conquistador (a giant, swinging Viking ship) and finally, the Zombie Shooter VR game. We were put into game rooms and strapped into vests and goggles, then given guns to shoot with. The entire simulation involves you shooting at zombies, which is actually kind of terrifying when it feels like it’s happening in real life. To no one’s surprise, this was Joel’s favorite part of the day (he really misses Call of Duty if you couldn’t tell). 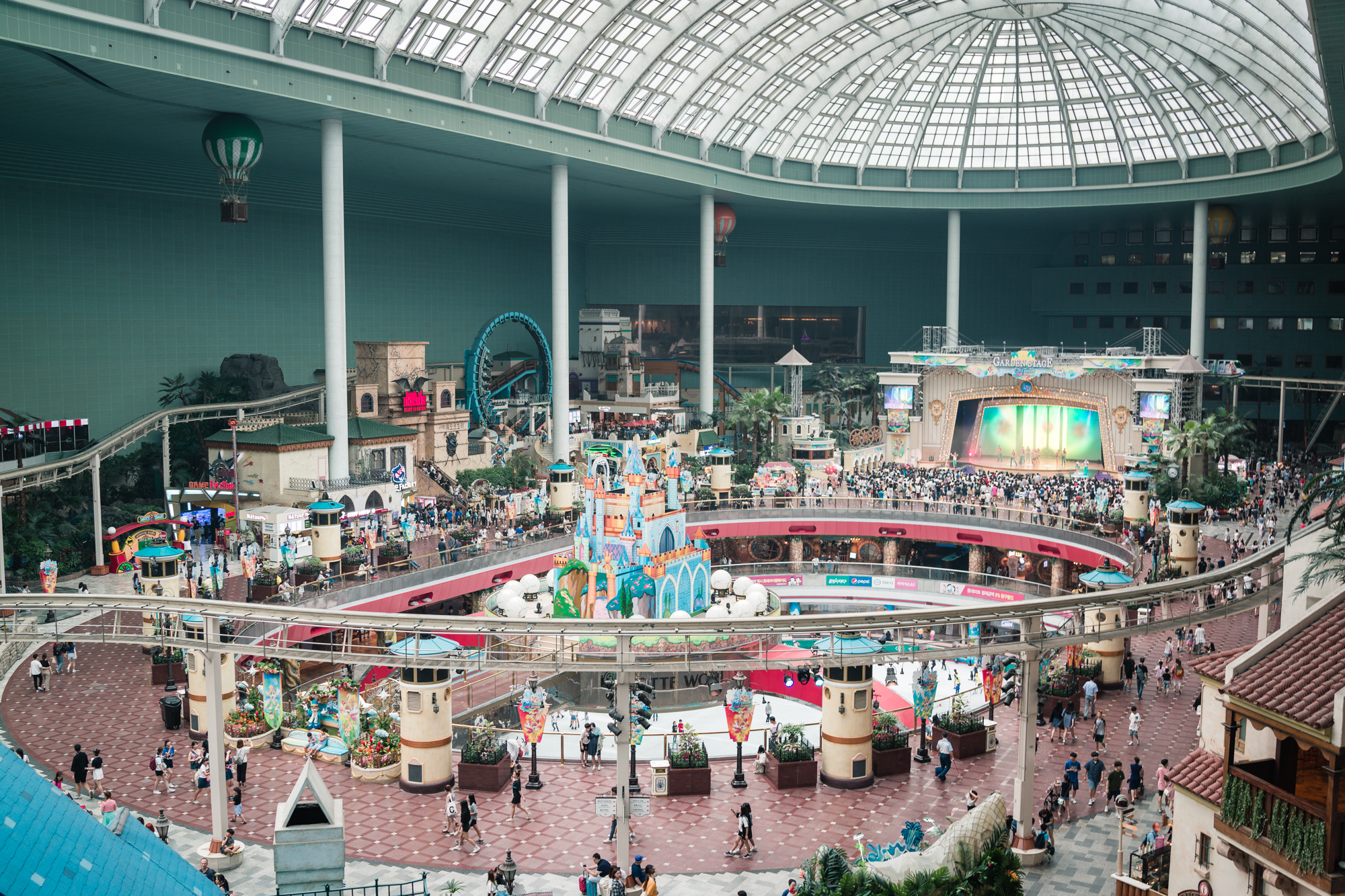 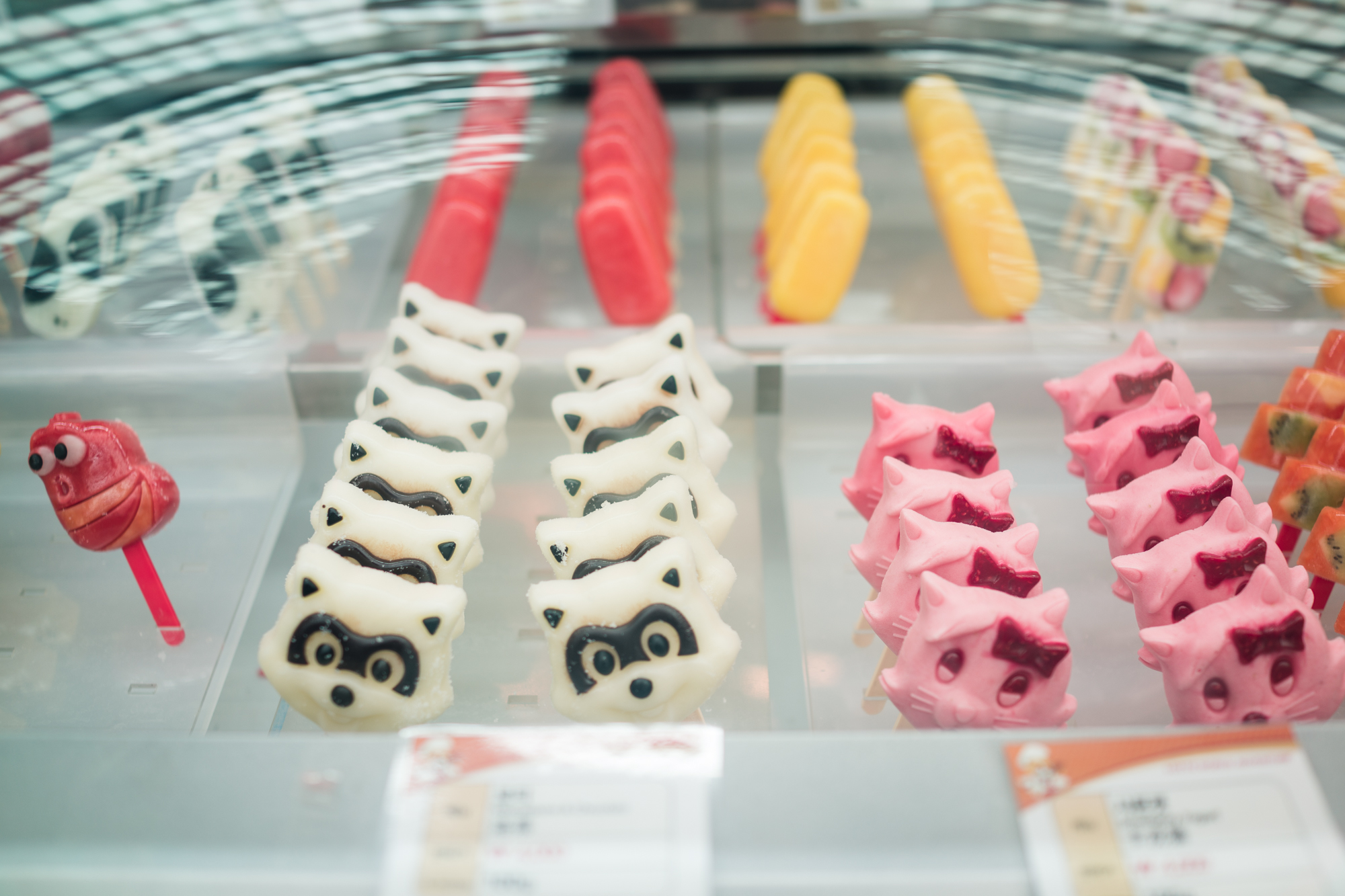 Another attraction of Lotte World is the Folk Museum, which can be accessed either through the park or with separate tickets. It’s very similar to Japan’s Edo-Tokyo Museum. We found life-size displays of both prehistoric and modern life, as well as miniature dioramas of scenes throughout Korean history. It’s worth checking out, especially if you already have a Lotte World pass for the day. 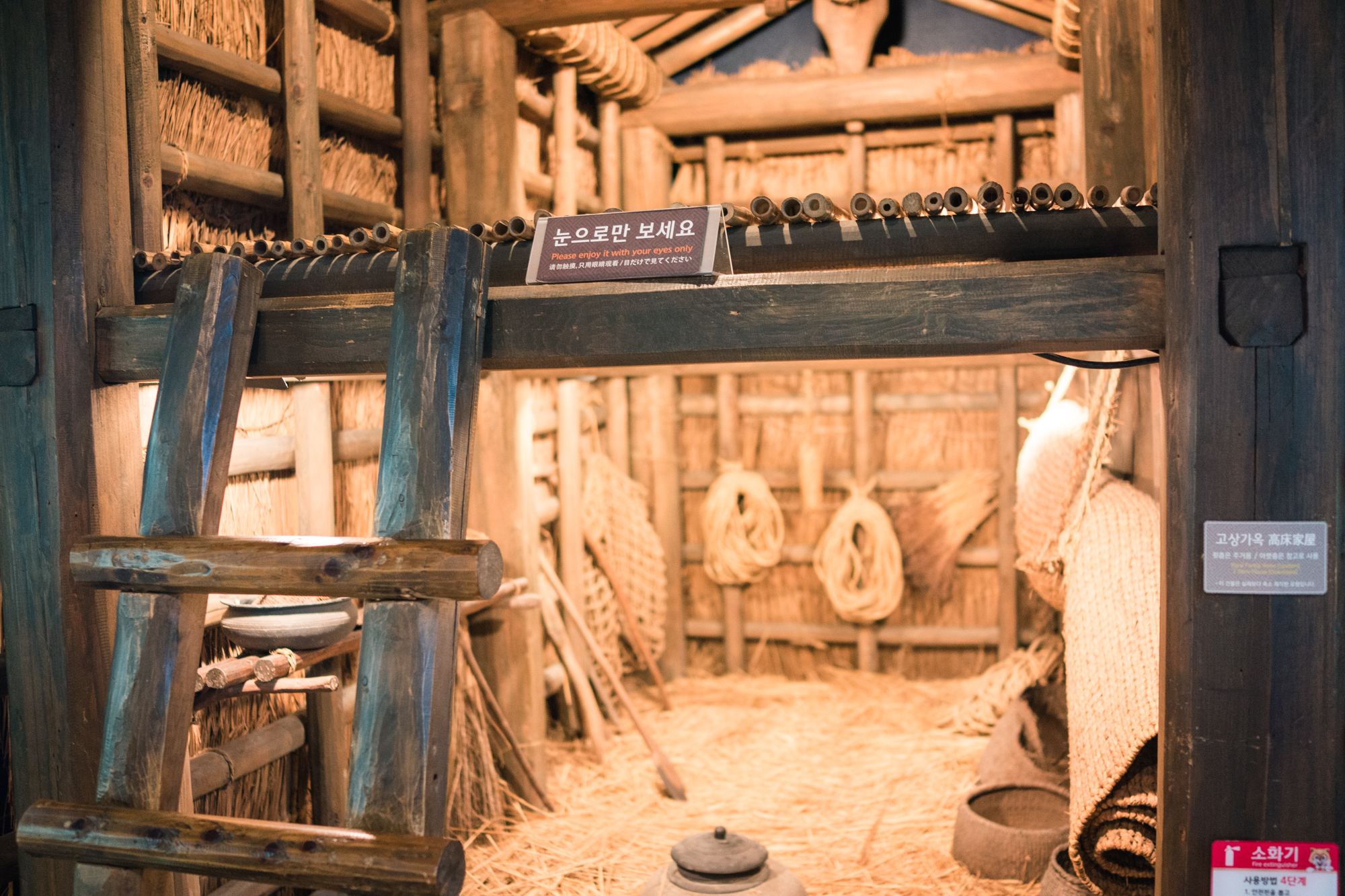 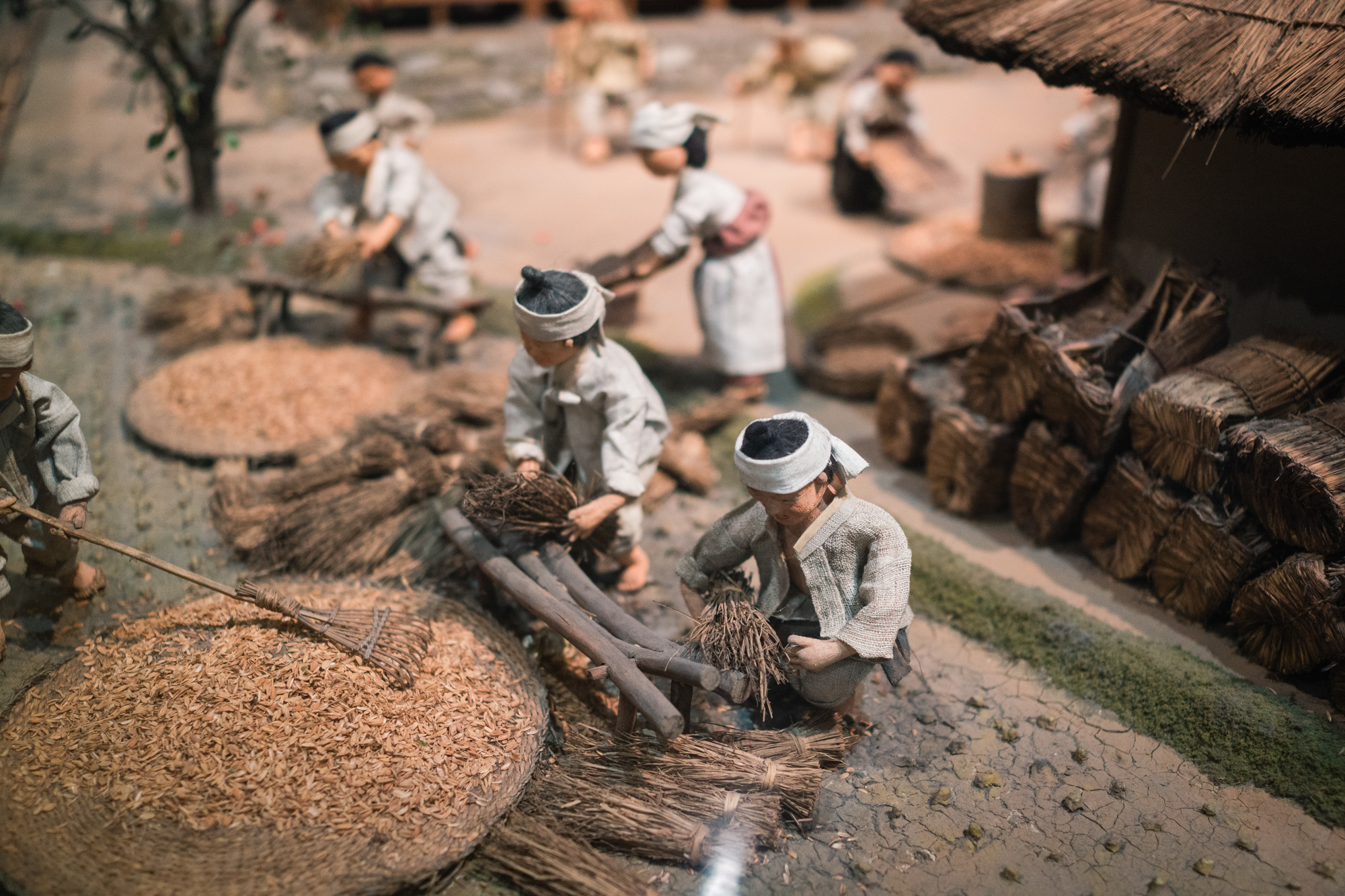 Connected to Lotte World is the massive Lotte Tower & Mall, home to more than 900 stores and restaurants. This is where we ended up for dinner after a long day of exploring the park.

Inside the mall is a buffet restaurant called Viking’s Warf, which was inspired by Fisherman’s Warf in San Francisco. They ship all of their seafood fresh from the US every day (let’s skip over the fact that we flew 8,000 miles from home just to have the same seafood that we could, uh, have back home). Their specialty is unlimited whole lobster, but they also have a variety of other dishes to choose from, like beef rib, abalone stew, chili crab, beef tartare, baby octopus, fresh mango, squid ink tempura, and a made-to-order sushi bar. There’s even a coffee bar, gelato bar, juice bar, and bakery to suit all your dessert needs. It also happened to be $100 per person (approximately 7x our daily food budget), but we kind of gave a collective ¯\_(ツ)_/¯ and went for it anyway. 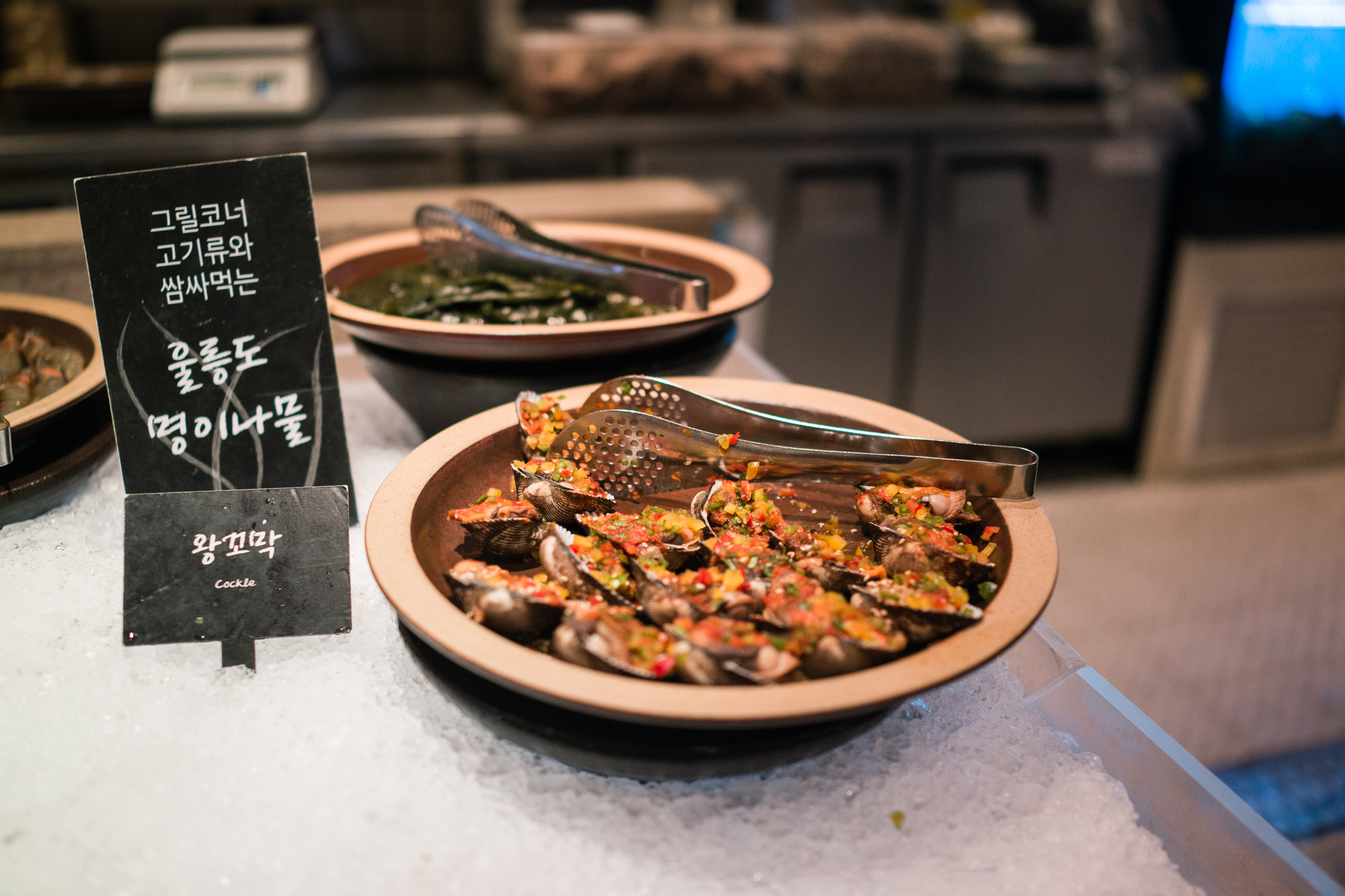 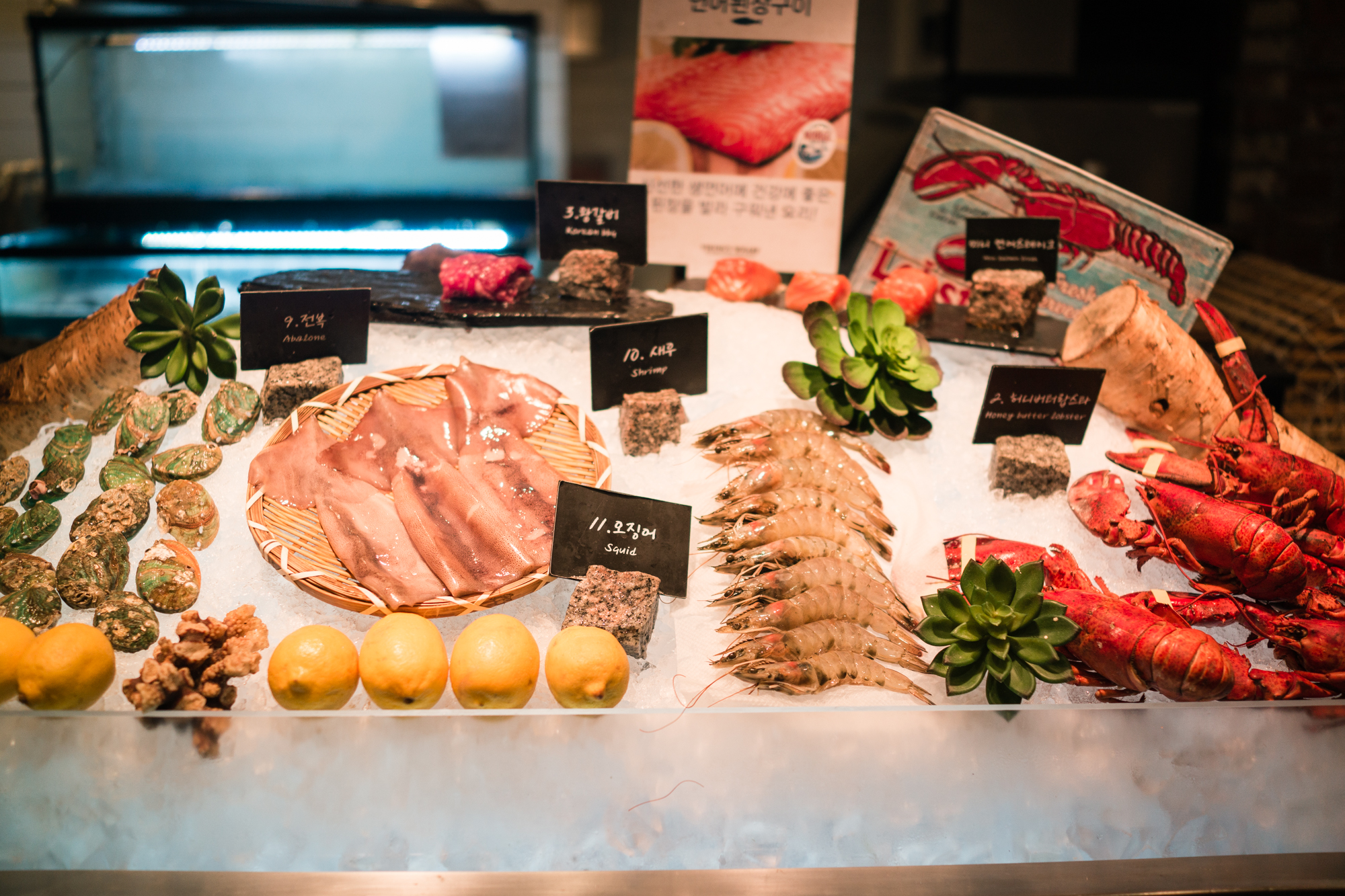 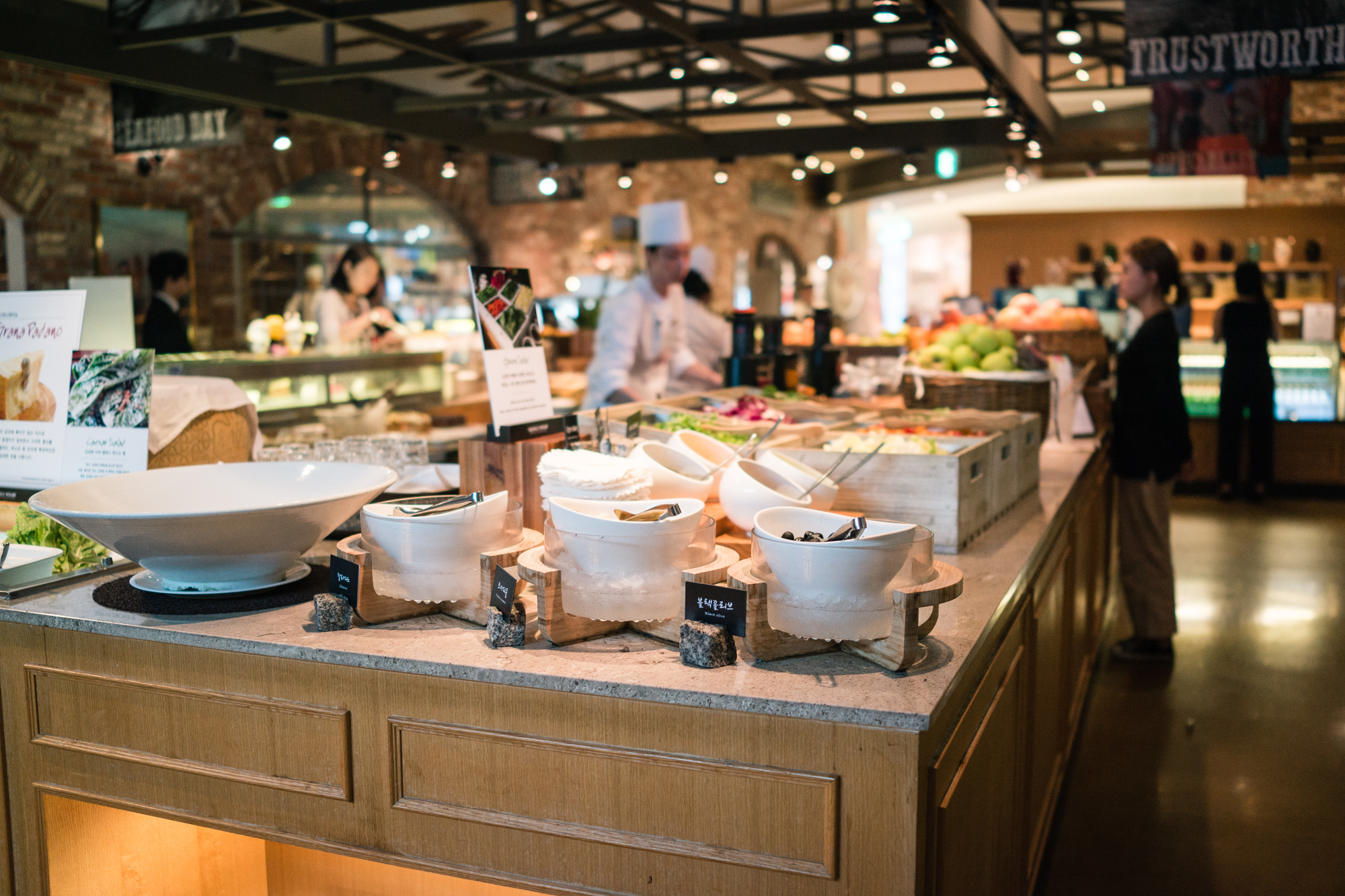 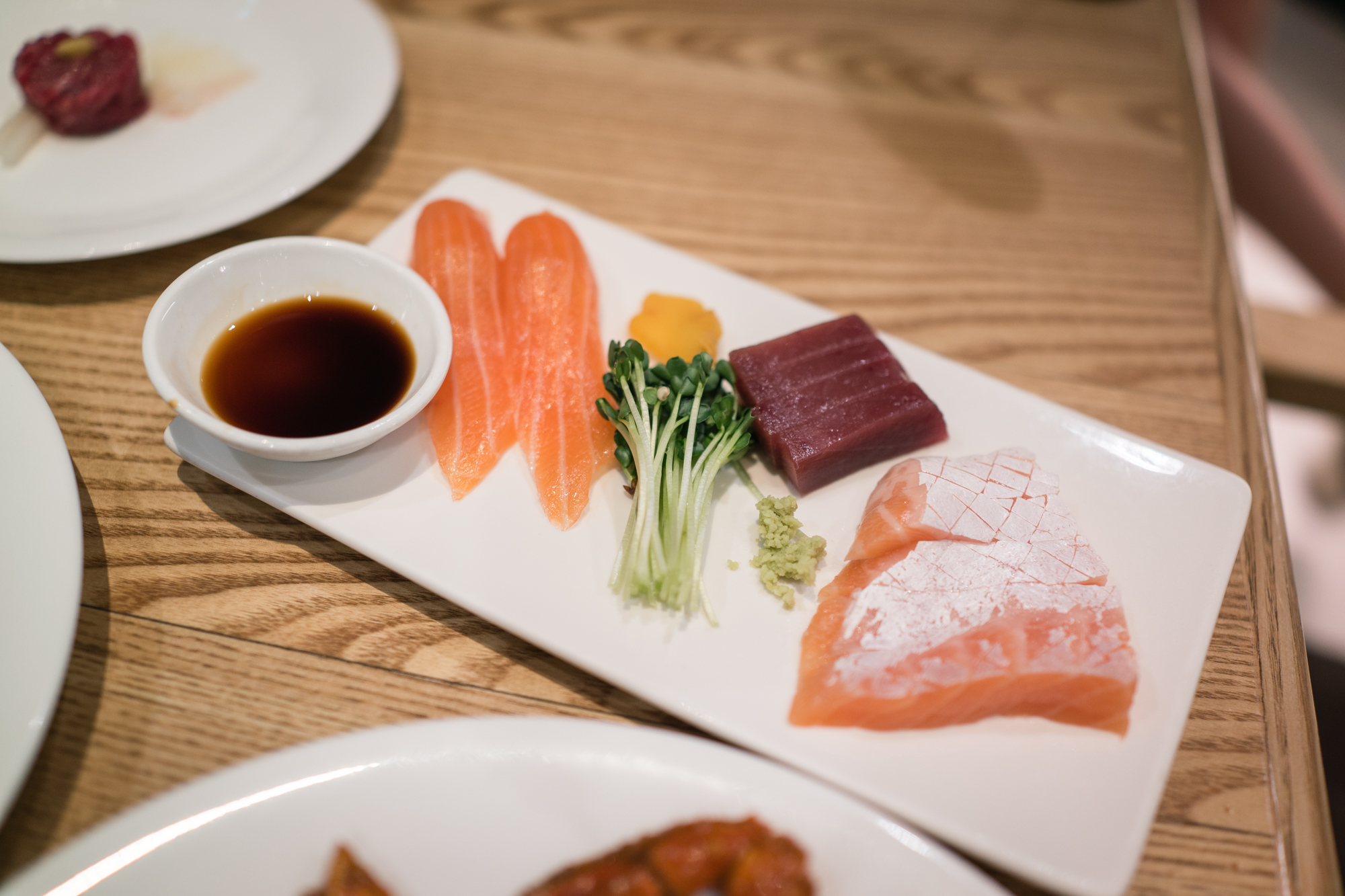 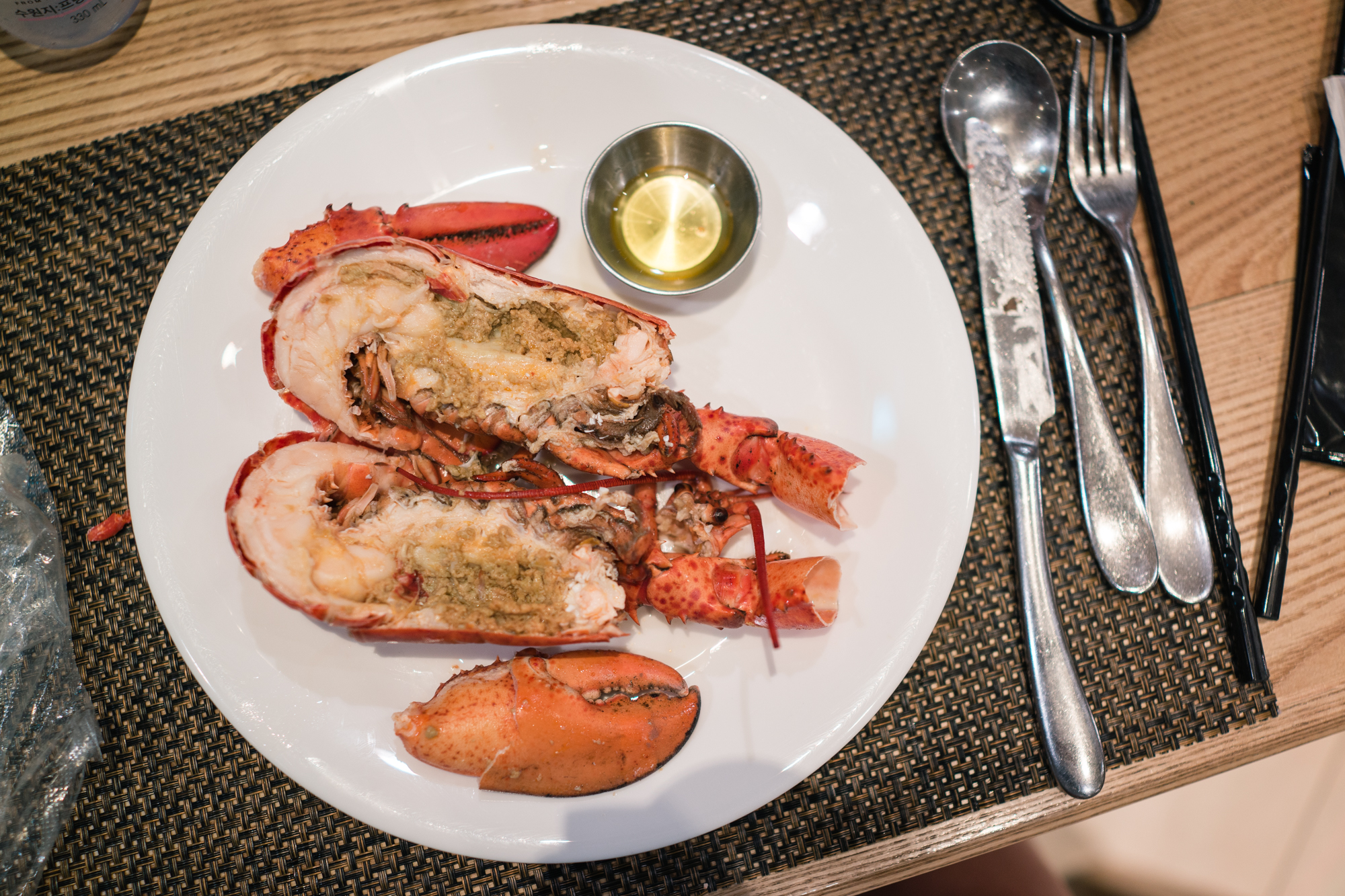 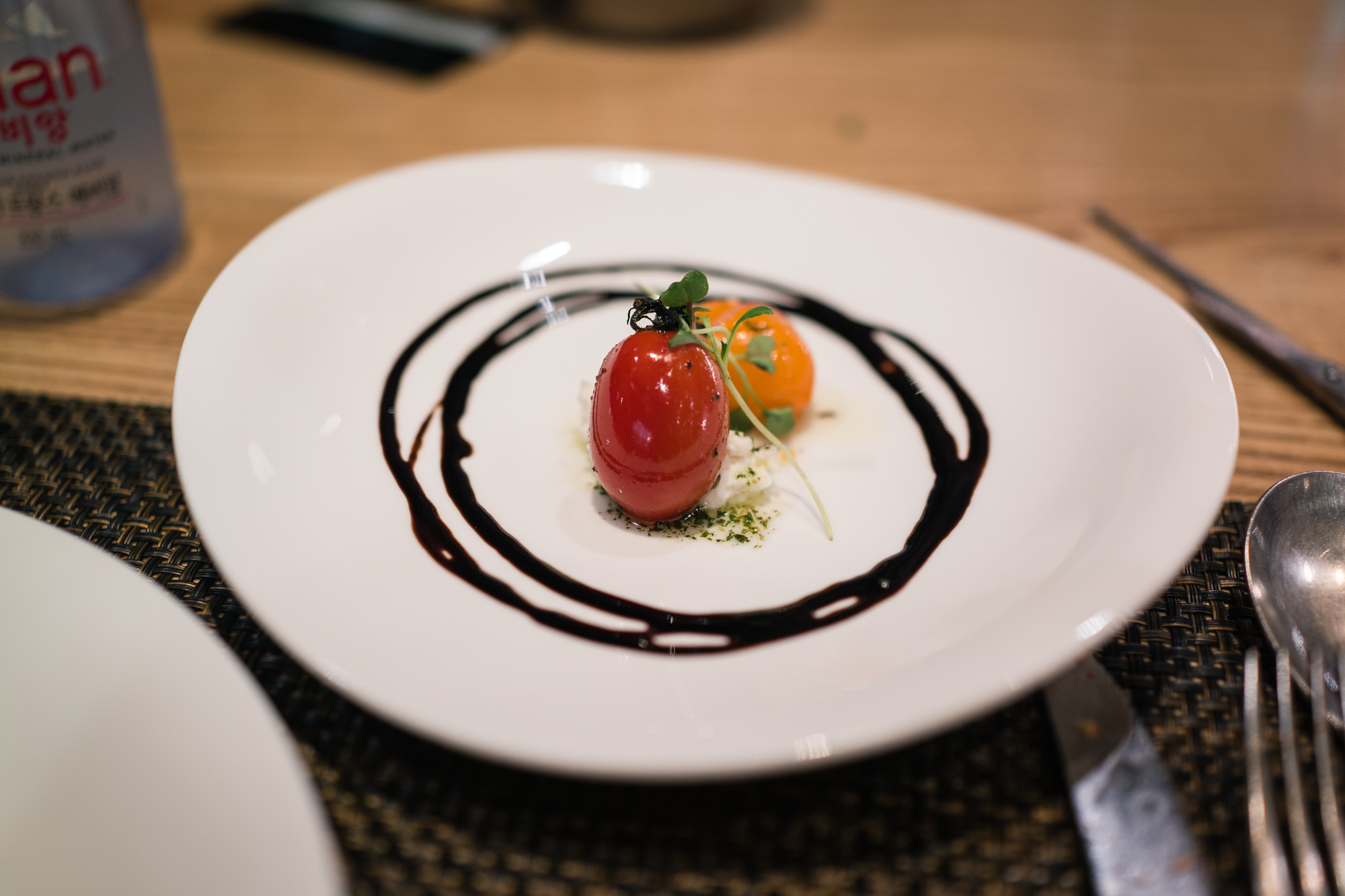 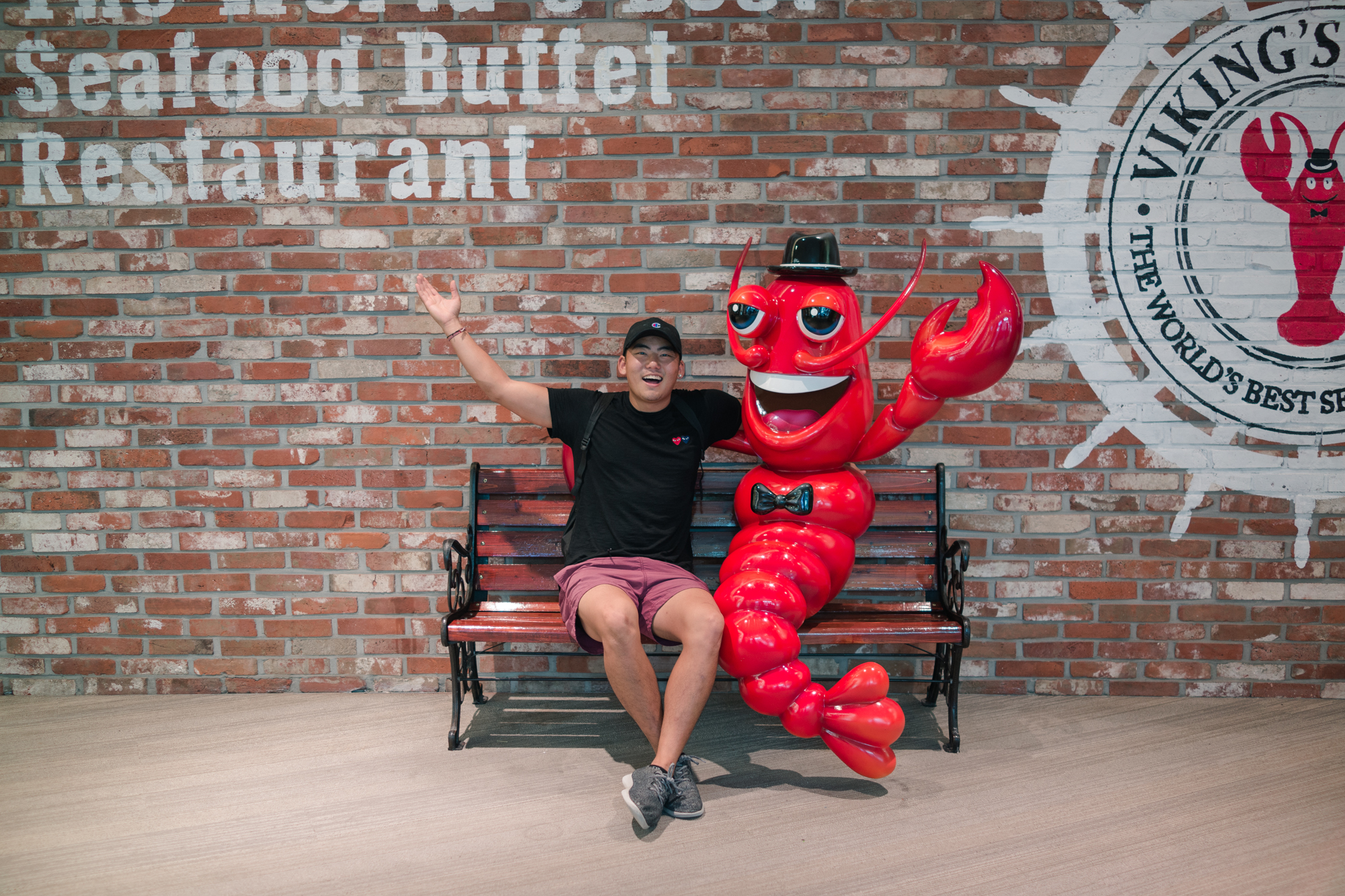 Overall, Lotte World is a fantastic option for anyone visiting Seoul and looking for a little adventure. Don’t miss out if you ever find yourself in South Korea!

1. You can buy tickets online ahead of time or at the door, but do check for coupons before purchasing. We used Voyagin to get 45% off ours. There are also various discounts depending on the time of day you choose to go, or whether or not you’re looking to hop on any rides. And make sure to keep your ticket on you! You need to present it to the staff before getting on each ride.

2. Lotte World has its own metro stop, so just get off at Jamsil (#2 green line) if you’re coming from the north side of the river. It’s only a 30-60 minute ride depending on which part of the city you’re coming from.

3. Time your trip well. If you don’t want to be stuck in massive queues all day, pick a weekday, and go early. When the park opens, run for the big rides like Atlantis or French Revolution, and you’ll avoid a 2-hour wait later on in the day.

4. There are three ways to skip the line. The first is to grab a “magic pass” from the front of a popular ride and come back at whatever time it gives you. You can get a new pass after you’ve used your previous one, or every two hours, whichever comes first. If the day is unbearably busy and you have a little extra cash on hand, you can also purchase unlimited passes for ‎₩100,000 or 5 passes for ‎₩30,000. You can also use the Lotte World app, which releases passes every 15 minutes. Warning: these are harder to snag than Coachella tickets. Seriously. We tried about 3-4 times on the dot, and each time was sold out instantly. My advice is to pick your day well (see #3) and avoid the hassle altogether.

5. Many of the attractions inside the park charge an additional fee. That’s not to say you can’t enjoy yourself on your original ticket alone (we didn’t pay for anything and had a great time), but if you want to try out things like the Horror Tomb, Mirror Maze, most VR games, or the Labworks art exhibit, you’ll need to pay extra.

1. Reservations book up a month in advance. Contact them through their site if you want to make one. If, however, you’re planning your visit last minute like we did, you also have the option of waiting in line. We went on a Tuesday night and were the 4th party in standby. We got in about an hour after arrival. They don’t make guarantees that you’ll be seated and I’d guess that had we gone during the weekend, we might not have been as lucky.

2. The restaurant is actually located in Lotte World Mall, a 10 story building standing adjacent to Lotte Tower. It’s on the 4F and has a giant lobster outside that you can take pictures with. The mall is divided into two sections, joined by a bridge, so if you can’t find it at first you might be in the wrong building.

3. Since they source from the US, the bill is actually in US dollars ($100 exactly). You have the option of either paying in US dollars or Korean Won. The conversion rate is based on the Industrial Bank of Korea exchange rate and is displayed at the check-in desk.

4. They’re open for lunch from 11:30am-3:30pm and for dinner from 6pm-10pm. Keep in mind that they clear out all of the food stations 15 minutes before closing.