Time is a funny thing. One day you’re sitting at work, staring out the window and thinking about how you wish you could just leave now, instead of waiting for another year to pass before you take the trip of a lifetime. Then suddenly you’re sipping coffee at a café in Seoul and wondering how the heck five weeks came and went from right under your nose.

When you’re traveling, the days and weeks have a way of blurring together in a way that makes each memory nearly indistinguishable from one another. This effect is expounded the more memories you try to fit, and eventually gets to the point where you can’t quite believe that you just woke up in a manga café, visited the A-bomb dome, ate the best pancakes of your life, hung out at a feudal castle, and cruised over to an island town all in the same day. It’s one of the reasons I’m happy to be a freak about documenting my life, because without the countless journal and photo records, I’m pretty sure I’d forget everything.

I’ll be posting monthly summaries of our travels in an effort to keep track of it all―because as much as I find joy in appreciating the little things, it’s just as important to reflect on the bigger picture.

So what happened this month?

July is our official first month on the road! We landed in Tokyo at the end of June and arrived fresh-eyed and ready for 28 days of zig-zagging through the country. The bulk of our time was spent in Tokyo and Kyoto (about one week each), with a few days in places like Osaka, Hiroshima, and their surrounding cities. Japan is a pricey country with a lot to see and do, and it was also the country that I was the most excited for. Both of these factors lead to us splurging a little more than we plan on doing in future destinations: ryokan stays, bullet trains, wagyu beef, etc. Overall, we did well in our spending compared to the experiences we had (about $80 a person a day, including travel between cities). 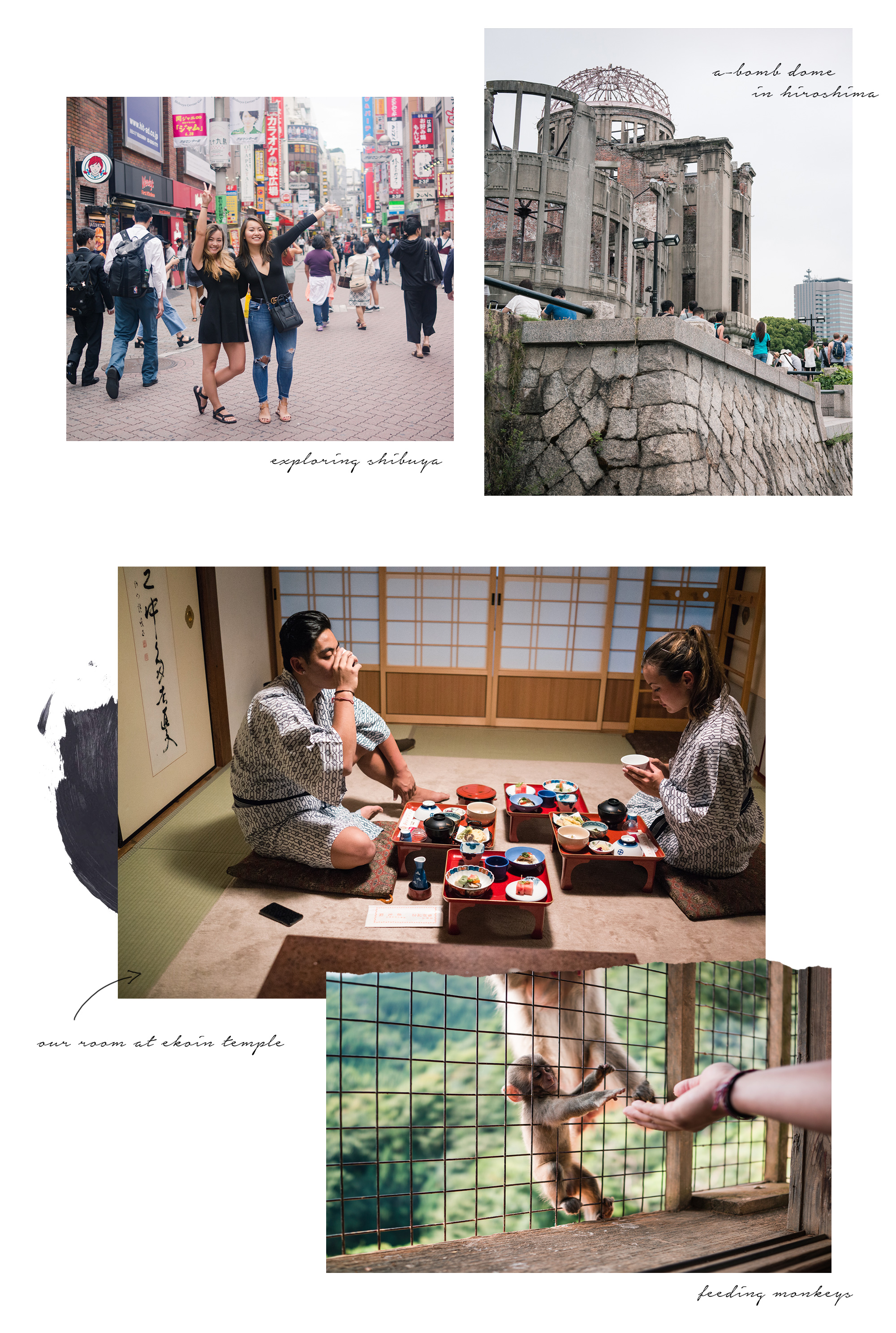 Landing in Japan for the first time: I’d been dreaming of coming here for the past decade. Just the feeling of being in the country was a special moment in and of itself.

Ghibli Museum: I’m a huge Ghibli nerd and this place was way better than I had hoped for.

AYCE/D on Mt. Takao: Because you can’t really eat and drink your fill at the top of a famous mountain and have it not be one of the best moments of your trip.

Touring Shibuya/Shinjuku with Keika: One of our friends from UCSB is originally from Tokyo, and hanging out with her for a few days in her hometown was one of my favorite parts of our first week in the city.

Lunch in Kibune: Dining over top of a small river and catching noodles out of a bamboo shoot was the perfect experience for summer.

Gion Matsuri: Japan is famous for its summer festivals, and I felt so grateful that we were able to experience one of the biggest of all.

Watching the sunset on Miyajima: I always thought that the floating torii in Miyajima would feel a bit underwhelming. Turns out that watching the red sun set behind the mountains, sipping a cold beer, and admiring the grand structure is actually sort of epic.

Hiroshima Peace Park: This was one moment in the trip where I was really forced to slow down and feel just how intense and vast the history of the world is. I’ll be posting more about this sometime in the future.

Swimming in Okunoshima: I knew that feeding wild bunnies was going to be a highlight on its own, but I didn’t expect to enjoy the actual island part of Okunoshima as much as I did. The water was beautifully clear and a great escape from the humidity.

Feeding monkeys in Kyoto: Their hands are SO TINY, especially the babies, and my heart was melting all over the place when one of them grabbed a piece of apple that I offered. 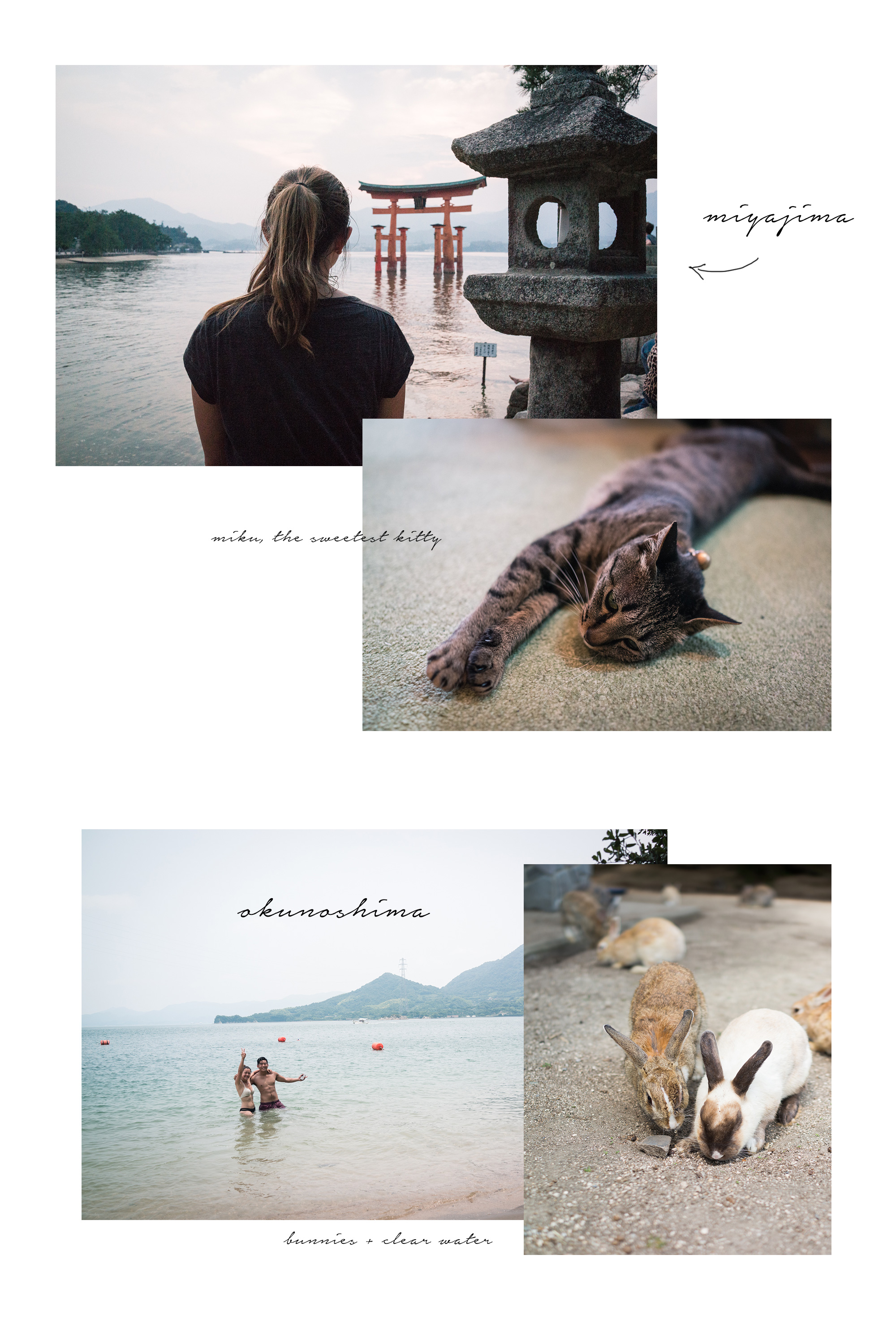 Getting my bra stolen: Yup. You read that right. I woke up one morning during our first week in Tokyo and couldn’t find my favorite (and only) bra anywhere. I ended up finding a cheap replacement at the Forever 21 in Harajuku and it’s just so uncomfortable. 🙁

Broken phone screen/case: Someone broke one of the buttons on my Mophie battery case. Then dropped the phone itself and shattered the screen. And then broke the case again. At least it served as a good excuse to pick up a new phone case at the Pokémon Center in Hiroshima.

Ushida yakiniku in Osaka: Oh my God this was the best meat I’ve ever had. Seriously. They serve you different cuts of beef in a cow-shaped serving tray (so you know what’s what) and you grill it yourself in the center of the table. We ended up paying about $35 a person for prime wagyu and drinks, a meal that would have run us several hundred back home.

Sweet potato ice cream in Asakusa, Tokyo: I think I’ve made my Japanese ice cream obsession quite clear by now, but the first one I tasted is still my favorite.

Curry bread: Piping hot, deep fried, and stuffed with curry sauce. Can be found changing the lives of casual shoppers in Nakano Broadway.

Pumpkin dango: My favorite street eat of Gion Matsuri. I’m a mochi fanatic as it is, but when it’s grilled and infused with pumpkin, it finds a special place in your heart (and stomach).

Hiroshima-style okonomiyaki: Whoever decided that okonomiyaki didn’t belong with noodles was very, very wrong. The pancake I tried in Hiroshima was layered with udon, mochi, and cheese and was by far the best I had over the past month.

Tiramisu pancakes: You’ve probably seen photos of the “Japanese pancakes” served up by Café Gram, but what you might not have known is that they serve other pancakes as well, including a tiramisu inspired edition. Not too sweet and dusted with dark cocoa, it turned out even more memorable than the famous premium stack (which were still delicious, by the way).

Crème brûlée cronut: It tastes just as amazing as it sounds. We found this on our second visit to Mister Donut during our last night in Japan, and the only regret we have is that we didn’t discover it sooner.

Yangnyeom gejang: I like a good sashimi plate from time to time but holy, raw crab is incredible. Koreans like to eat it soaked in chili marinade and as it turns out, so do I. 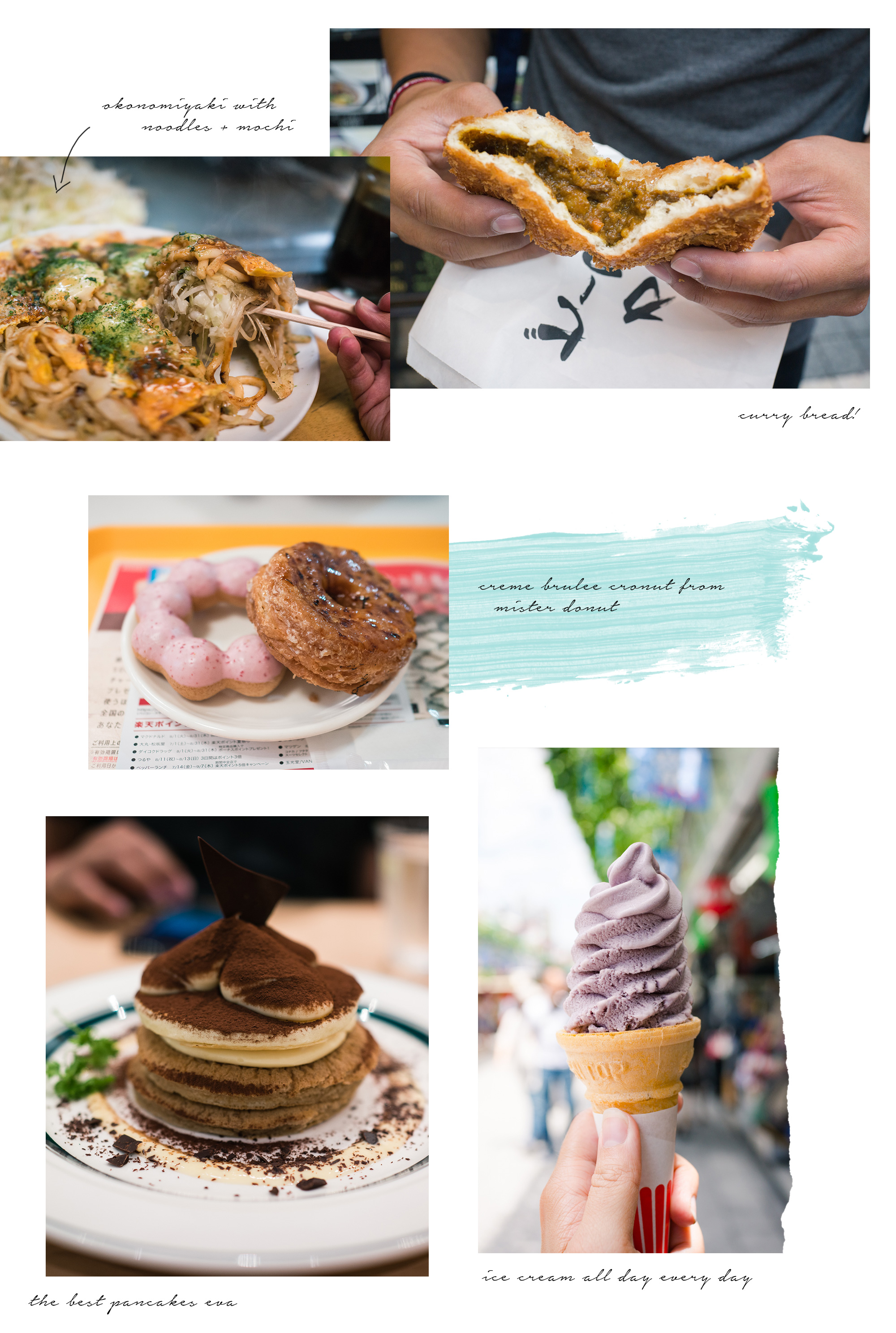 Ekoin Temple: Mt. Koya was one of the highlights of our time in Japan, and part of that was because of where we stayed. Koyasan is one of the most sacred sites in the entire country and many Buddhist temples are open to overnight guests. You’re put in your own private ryokan-style room, served a kaiseki breakfast and dinner, and woken up early to watch the monk’s morning service and fire ritual. The one we stayed at (Ekoin) is actually the oldest temple on Mt. Koya and was built by the disciple of Kobo Daishi himself nearly 1200 years ago.

Santiago Guesthouse Hiroshima: Points for being everything that a hostel should. Clean and modern with spacious facilities, and only short walk from Hiroshima Peace Park. If you’re ever in the area, I can’t recommend these guys enough.

Miyajima Guest House Mikuniya: Part ryokan, part beach-side mansion. It felt cozy and luxurious at the same time and was a perfect place to stay for an overnight island getaway. It also helped that the owner had the friendliest cat, Miku.

We sailed to South Korea in the last week of the month, starting with Busan and working our way up to Seoul. Japan was a whirlwind of sightseeing, so we plan on basing ourselves out of Seoul and taking things a little slower in order to get to know the city better (and save a little cash while we’re at it). I’m also hoping that Joel’s Korean skills will help us connect with the local culture more. Here’s to lots of soju and KBBQ in August!