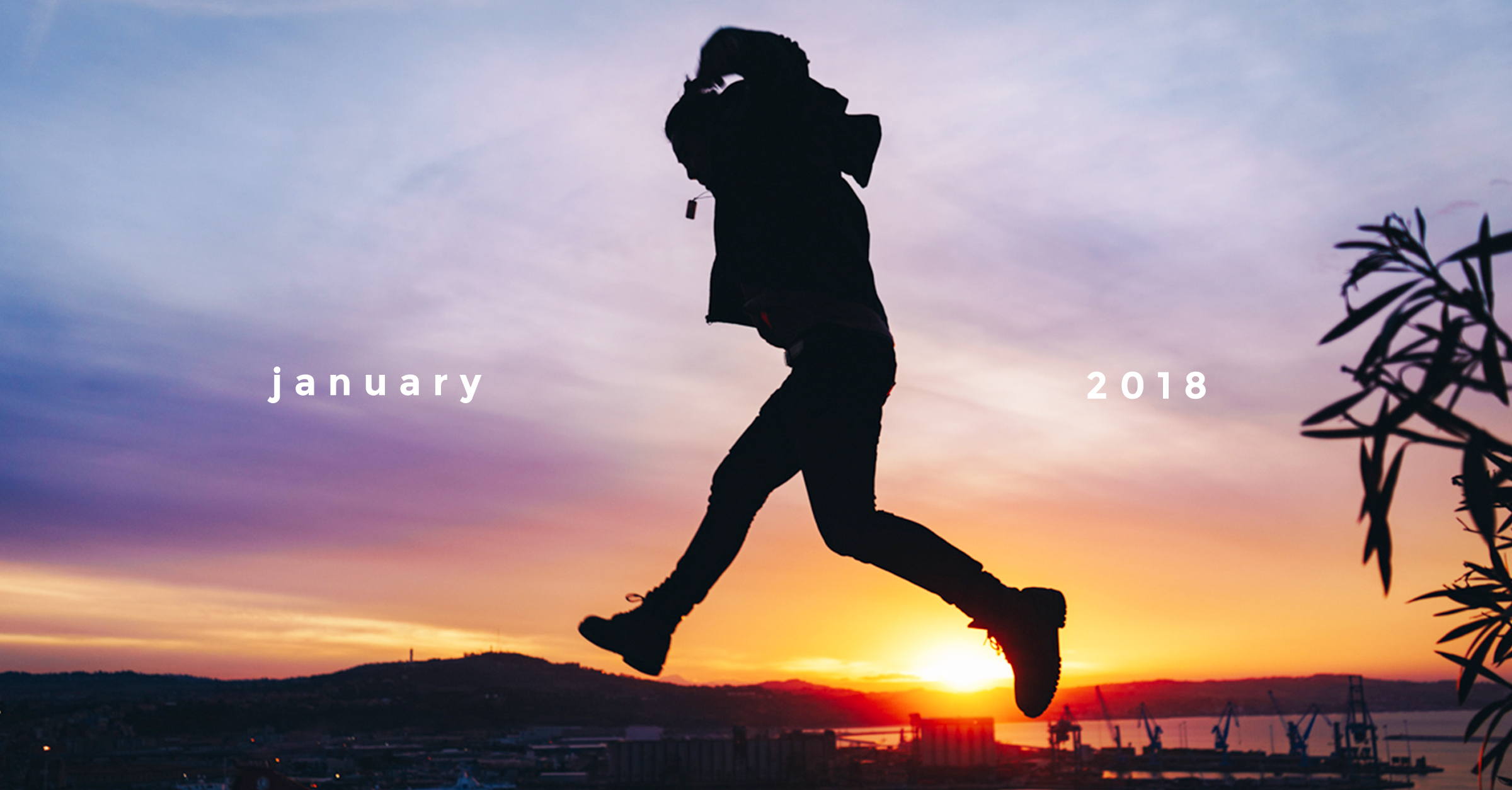 That means we’re already one month deep into 2018.

I’m still writing the date wrong and we’re already 1/12th of the way over? Say whaaaa?

Time is so strange sometimes. The way you can feel like the months have flown by in a second, but the experiences you had just a few weeks ago seem like a lifetime away.

During the length of January, we visited four countries in total: Austria, Slovenia, Croatia, and currently, Italy. We’ve taken a lot of long bus rides and switched cities a little too often. It’s making me feel a lot of things at once: simultaneously wanting the comfort of my own bed, feeling a strange saudade for all the beautiful places I keep learning about and will never have the time to properly visit, and wondering if my pants feel a little tighter because they shrunk in the wash or if the all-carb Italian diet thing is starting to catch up with me. I guess you can say this month was emotional.

And now, for your collective amusement, introducing…*drumroll* the best and worst moments of the month!

1. Reliving the Sound of Music in Salzburg. I grew up on this movie. We’d play it every Christmas, and on random days throughout the year, ever since I was a kid. I’ve seen it start-to-finish more times than I can count. I know all the songs by heart.

The film famously takes place in Salzburg, Austria, a gorgeous town at the base of the Salzkammergut Mountains. I already knew how much I would love seeing the filming locations in person, but what I didn’t expect was to fall in love with the parts of Salzburg that were off-camera. This city is just so charming in such a typical, Austrian way, with pretty pastels lining the cobblestone streets and massive, snow-capped mountains looming up in the distance. I will forever be recommending this place to anyone who asks.

2. Visiting Hallstatt in person. This sounds really lame but I’m pretty sure that the Chrome app, Momento, literally changed my life. It’s a browser app that cycles through various professional travel photos on your Chrome homepage (amongst other features), and this tiny piece of software was responsible for several of the destination choices on our trip. Every time I’d spot an image that I liked, I’d write down the location on a running list of places that I have stored in Evernote. Lijiang was one such place. Hallstatt was another.

I remember seeing this particular scene pop up one day at work and thought to myself, this can’t possibly be a real place. But it is, as anyone with an Instagram account has probably come to realize in the last year. I made it my mission to go. And it. Was. So. Incredible. There are some places that just can’t even begin to be captured through a lens, and this little slice of Earth is so much more epic than the photo that originally inspired me to go there.

3. The friendly faces of Ancona. We arrived in Italy via overnight ferry from Split and debarked in Ancona, a port-side city that doesn’t see much tourist traffic outside of the people passing through from Croatia. And the locals were all the more welcoming for it. Maybe it’s the weather, maybe it’s the seaside, or maybe it’s that wonderful Italian tradition of savoring la dolce far niente, but the people of Ancona are so freaking charming

started off with a classic Italian breakfast of coffee and pastry at a nearby café, and all the workers were incredibly peppy (despite it being 8am on a Monday), greeting all their regulars with enthusiastic smiles and “Buongiorno!”s. On the way home, we visited the butcher across the street from our Airbnb, and the guy who was running things was everything you’d imagine a typical, boisterous, life-loving Italian man to be. Ancona locals are the best kinds of people.

4. Seeing Venice for the first time: After a long bus ride from Ancona, we arrived at the Venice train station. If you’ve never been to Venice, you might expect everything to be dull and grey like how the neighborhoods surrounding stations usually are. But Venezia Santa Lucia is different. You exit the line of doors at the end of the building and suddenly, the Grand Canal opens up before you, the San Simeone Piccolo smack dab in the middle of . There’s a special feeling of “arriving” in a new place that’s inarguably addictive (at least for me) and this was one of the best arrival moments I’ve ever experienced.

5. Experiencing “La Grassa” of Italy. Also known as Bologna. A second-tier city in the eyes of visitors, Bologna is usually passed over in favor of more famous destinations like Florence, Rome, and Milan. We casually decided to stop by for the weekend on the way over to Florence from Venice, and it might just be my favorite Italian city. Known as “La Grassa” (the fat) of the country, Bologna is a maze of streets filled with charcuterie butchers, cheese shops, and produce markets. In between these eateries flows an endless stream of students and locals sitting outside and chatting with glasses of wine, their plates piled high with various aperitivo bites. It felt the most “Italian” of anything I’ve experienced so far, and wandering around these narrow alleys and eating our way through different restaurants had me seriously questioning whether or not I should add Bologna to my list of “places to live one day”.

1. Out first night in Split. It was ridiculous. We took an evening bus from Dubrovnik that ended up breaking down in the middle of the road. We waited and waited to get picked up by another bus, and finally arrived in town just shy of midnight. Neither of us had eaten a real dinner by this point, but we couldn’t stop for food because our Airbnb host was waiting to check us in.

On our walk over from the station, the light drizzle outside suddenly turned into torrential rain. We got lost and couldn’t find the address (Croatian streets are frustratingly difficult to navigate) and just as we were telling our host the situation via WhatsApp, Joel’s phone died. We ended up walaround in the dark with his laptop balanced against his chest so his phone could charge.

Our host eventually found us. We checked in, dried off, and went out in search of a meal. The original restaurant we wanted to go to had stopped serving any food by this time, so we settled on the only place open at 1 am: a fast-food joint down the street. It actually ended up being one of my favorite meals ever, so our poor luck didn’t last for long.

2. getting scammed in Dubrovnik. Dubrovnik experiences true high and low seasons. In the summers, flocks of cruise tourists stream through the main squares, briefly passing by on their way up the Adriatic coast. These boats hibernate for the winter, and so does just about every restaurant and shop in town. We were hunting for a cheap lunch (nothing good ever comes from being desperately hungry in a new place) and only found one spot open that didn’t charge $30+ for a bowl of spaghetti. An enthusiastic hostess greeting us outside and insisted that we come in. The prices were reasonable, and we were hungry, so we didn’t give it much thought. No one was in the restaurant. It was completely empty. Joel and I had a weird feeling about it and decided to look up the reviews online, and OH MY GOD, I don’t think I’ve ever seen a restaurant with this many 1 star ratings. Let me summarize:

“On our way out the door, he told us to expect service like this because of our new president in the United States.”

“The staff attempted to rip us off by overcharging for a piece of butter and then threatening to call the police!”

“The meat was cold. I send it back, heard ‘ping’ and there was my plate back.”

“It turned out to be my worst experience in Croatia.”

We couldn’t get out of that place fast enough.

1. Bosnian bread & sausage. This wasn’t one specific meal, but every time we had Bosnian food in Slovenia and Croatia, it was life-changing. I’m pretty sure Bosnian-style rolls are now on my top 5 favorite foods list. They’re fat and round, with spongey interiors soaked in grease from the finger sausages splayed between the layers. And it’s always served with red pepper sauce.

2. Pepperoni pizza in Split. Like I mentioned above, we were miserably wet and hungry on our first night in Split when we wandered into a fast-food restaurant and had the best pizza of our lives. Never had I felt more at peace with the world when I sat down on our bed, picked up a slice, and watched an episode of Friends with Joel by my side.

3. Home-cooked Italian food in Ancona. Fun fact: everything in Italy closes on Monday’s. Joel and I have a tradition of treating ourselves to a nice dinner (well, nice by our standards anyway) on the first day that we arrive in a new country, but we couldn’t find a proper restaurant to eat at during our only day in Ancona. So we decided to make dinner ourselves. We put together a spread of caprese salad and arrabbiata gnocchi, followed by steaks, with mushroom, polenta, and olives on the side. All washed down with sparkling red wine and finished off with dark chocolate. We hadn’t cooked up a full meal like this in lord knows how long, so it was a really nice change of pace.

4. Carbonara in Venice. Omg. Somewhere in a small, unassuming restaurant in the alleys of Venice is the best carbonara in the world (I may be exaggerating but just go with it). Carbonara is a difficult dish to get right, especially considering how so many American chefs make it with cream or peas (??) and those of us who attempt more authentic recipes end up with spaghetti and scrambled eggs. This dish was perfectly rich and buttery, with just the right toss of salty guanciale to cut through the indulgent flavors.

5. Focaccia in Florence. Special shoutout to the free bread basket at Fuoco Matto. I wish I was kidding. We grabbed a spontaneous dinner at the place just down the block from our hostel on our first evening in Florence. They serve you a portion of various cuts of bread as a complimentary appetizer, and holy goodness, the squares of focaccia almost had me cancelling my main order in favor of eating straight bread for dinner.

We’re making (eating) our way up Italy (Milan is next!) and then passing through Switzerland for a few days before arriving in France. I’m really stoked for the next month—I’ve wanted to visit the Alsace region for years now, and Paris is my favorite city in the world

: I tried out vlogging for the first time while in Venice! If you want to watch 14 glorious minutes of me speaking awkwardly to the camera from unflattering angles, check it out. There might be more to come in the next few months!