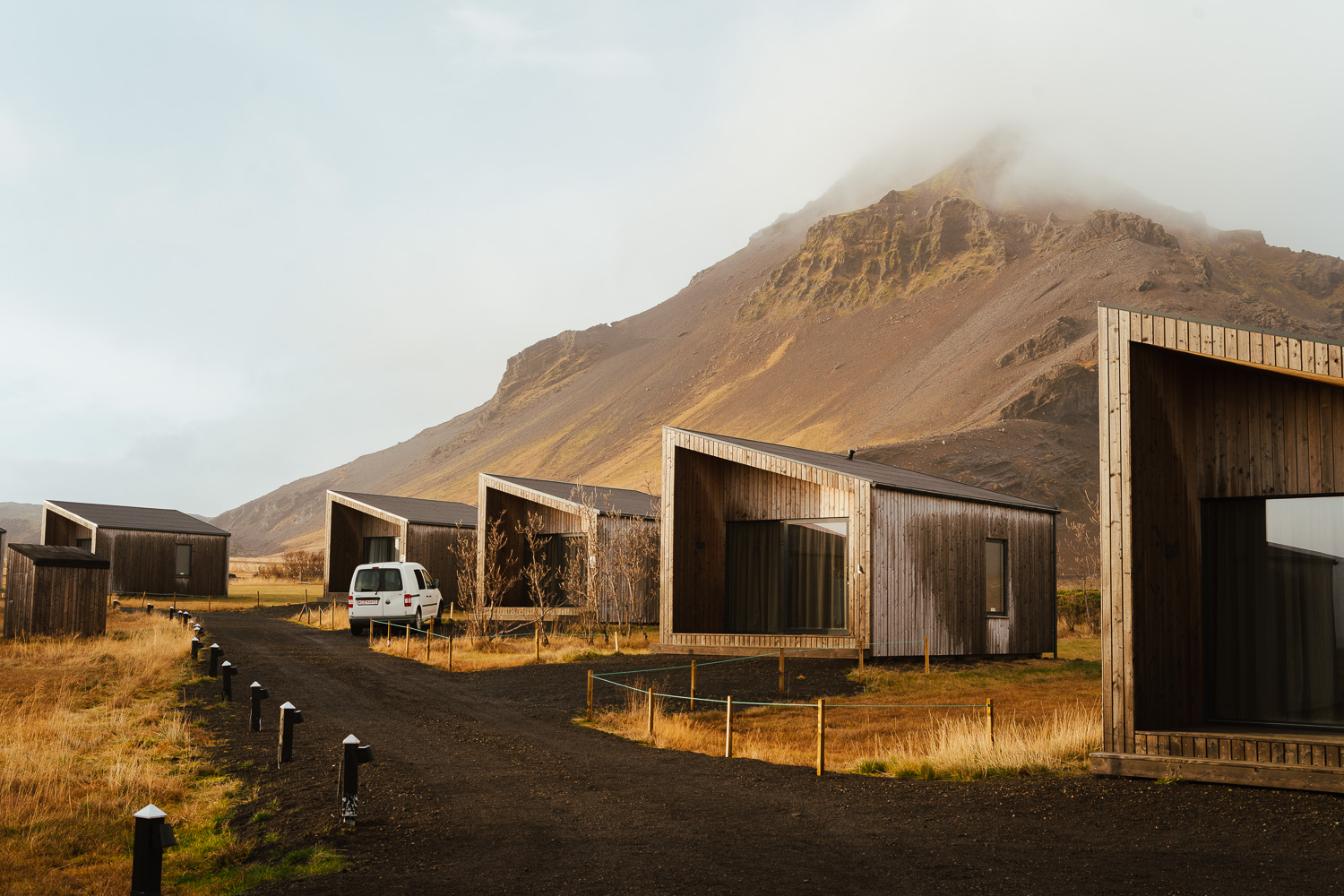 A large part of Iceland’s tourism comes from stopovers and airline deals, which means that many visitors only ever get to spend a few days in the country. This is why a handful of sights close to Reykjavik—known as the “Golden Circle”—are amongst the most frequently visited tourist destinations in the country. Included are Thingvellir National Park, Gullfoss, and the frankly-named Geysir.

The weather was much less cooperative with us today than it had been in days prior. Whereas Vik brought crisp, clear, winter skies and light snowfall, we spent most of the day battling famous Icelandic winds and an unpleasant drizzle that made photography difficult. It was also cold. Really cold.

Our main plan of attack was to visit the sights in reverse order, by driving to the end of the route first and working our way backward. We started our day later than expected and with limited daylight, we didn’t want to miss one of Iceland’s most impactful waterfalls.

On the way there, we spotted a sign for Friðheimar, an indoor tomato farm located in a small town called Reykholt. I had vaguely heard of it in a few travel blogs prior to our trip, and so we made a last-minute detour to check it out.

Most of Iceland’s agriculture takes place in high-tech greenhouses due to the country’s unpredictable weather conditions and lack of sunlight. Friðheimar is perhaps the most famous example of this. Endless rows of tomato crops wrap around the interior like a maze, with several picnic-style seating areas in between. There’s also a tomato-soup-and-bread buffet and various tomato-themed souvenirs (like tomato jam or bottled soup) for tourists to bring home.

An hour later, we finally arrived at Gullfoss, a pounding cascade fed by the Hvítá River.

I was slightly disappointed to find that most of the snow had melted away due to the recent rain. It was still beautiful to witness in person, but I had a very different mental image after much of the frozen landscapes we had seen on the east coast.

We started our drive back towards Reykjavik. The next stop was Geysir, which, as you can probably guess, is a large geyser. Iceland is a bed of geothermal activity (hello Blue Lagoon) and Haukadalur Valley is one of the best places to witness this powerful form of energy in action.

This was my first time seeing a geyser in person. It was a lot more exciting than expected, with a lot of engagement and reaction from the crowd every time it erupted. Joel and I loved watching the surface bubble ominously and guessing when it would blow next, as well as running from the warm spray when it finally did.

We headed to our final destination of the day, Þingvellir (Thingvellir) National Park. The park is a designated UNESCO site home to the tectonic rift that separates modern-day North America and Europe, and is the only place in the world where you can walk between the two.

Yup, you can literally walk between two continents. How wild is that?

There’s an opportunity for scuba diving and snorkeling here at the Silfra fissure site, where you can explore the crack between the two plates underwater. Joel and I had to pass due to time constraints, but it’s certainly something I’d consider doing on a return visit.

Today also happened to be Joel’s birthday (!), and so we spent our evening at Grillmarkaðurinn, a chic Icelandic restaurant in the heart of Reykjavik.

We ordered a mix of various local cuisines, including two seafood and red-meat tasting platters (horse steak included), but the clear winner of the evening was our crab leg appetizer. The flesh was fresh, tasty, and served in an intoxicating lemon butter sauce. It was possibly the most memorable dish of the entire trip.

Our seventh and final day of exploring was upon us.

Trips abroad often feel like they pass in an instant, but this time was different. Out driving in the middle of the Icelandic wilderness, it felt like we had been here for weeks, even months. The separation from life back home felt so full and complete that it was hard to believe that it had been only a week since I left my apartment in San Francisco.

I thought about this a lot as we drove up the west coast—what it would be like to live here. I think about this in almost every country I visit, and it’s one of the parts that fascinate me the most about travel. I wonder what it would be like to wake up in a different home, what route I would take on the way to work, what kind of food I’d cook for myself, what kind of friends I might have. I think about how different my life might have turned out if I had been given a different hand, one with a card in Taiwan, or Brazil, or even Iceland. What kind of person would I be?

We started the day at a small, family-run business known as the Bjarnarhöfn Shark Museum.

Hákarl is one of the most famous (or as some may argue, infamous) foods in Iceland. Otherwise known as “rotten shark”, this dish is produced by fermenting and preserving the flesh of Greenland sharks. Since the animal is toxic to consume fresh, it must be buried and dried for several months before it’s safe to eat. This also bears the unpleasant side effect of producing a very strong scent of ammonia.

The smell is what usually turns off those brave enough to get close. Obviously, Joel and I decided that we had to try it.

The verdict? Not bad. Not bad at all.

Anthony Bourdain once claimed hákarl to be the “the single worst, most disgusting and terrible tasting thing” he had ever eaten, which I consider somewhat of an exaggeration. It wasn’t something that I’d go out of my way to eat, but it was certainly edible.

The flesh itself is mostly tasteless, and the ammonia goes straight up your nose like a strong horseradish or wasabi. Many people think that the smell is reminiscent of pee—if that’s the case, I’d get that checked out by your doctor, because that’s some seriously radioactive piss.

I’d categorize the scent as something closer to household cleaning products. Not pleasant, but certainly not world-ending.

After our shark adventures, we set out for Búðir Church, otherwise known as “that black church on Instagram”. It’s the oldest wooden church in Iceland and sits atop a lava field, surrounded by golden fields and backdropped by the roaring sea. It’s really very beautiful, despite feeling a bit minimal as far as tourist attractions go.

Next up was Kirkjufell, the swooping peak made (even more) famous by Game of Thrones. We had trouble identifying the area at first, since the most recognizable vantage point is actually a short walk from the road.

Our final stop of the day was Djúpalónssandur beach (say that three times fast), a rugged and raw oceanfront that I (personally) found much more appealing than the black sand beaches in Vik. Jagged, moss-laden lava rocks hugged the coastline and angry, choppy waves came crashing down every few seconds. I felt like a sailor lost at sea.

We ended up in Arnarstapi just before dusk. It’s a small fishing village comprised of a handful of cottages and just four cafés, all of which we later learned close early in winter.

By 6pm, we realized that our dinner options were quickly dwindling. The town was completely abandoned, save for the two cabins next to us. We had half a jar of fried onions an a questionable package of Skyr sitting in the fridge, and Google Maps indicated that the nearest sign of civilization was a far-off drive. We considered knocking on every door in the village until someone decided to feed us, but thought better of it.

Our closest hope was a guesthouse located 40 minutes east of us. If there were people staying there, there was most likely food as well.

Luckily, our bet paid off, and we had a lovely dinner of lamb meatballs, seafood casserole, and red wine. The weather was kind tonight and we made it back to our cabins safely.

Day 8: Back to Reykjavik

We had a late breakfast of fish and chips at the café across the road and ordered a pizza for the journey back. A hazy sunrise peeked lazily over the horizon as an ABBA soundtrack played quietly in the speakers overhead. I bid a silent goodbye to the solitude of the west coast, and we started our drive back to the city.

We returned our trusty Jimny to the car rental lot at the Keflavik Airport and boarded our flight back to San Francisco.

Thanks for all the memories, Iceland. I’ll be back someday.