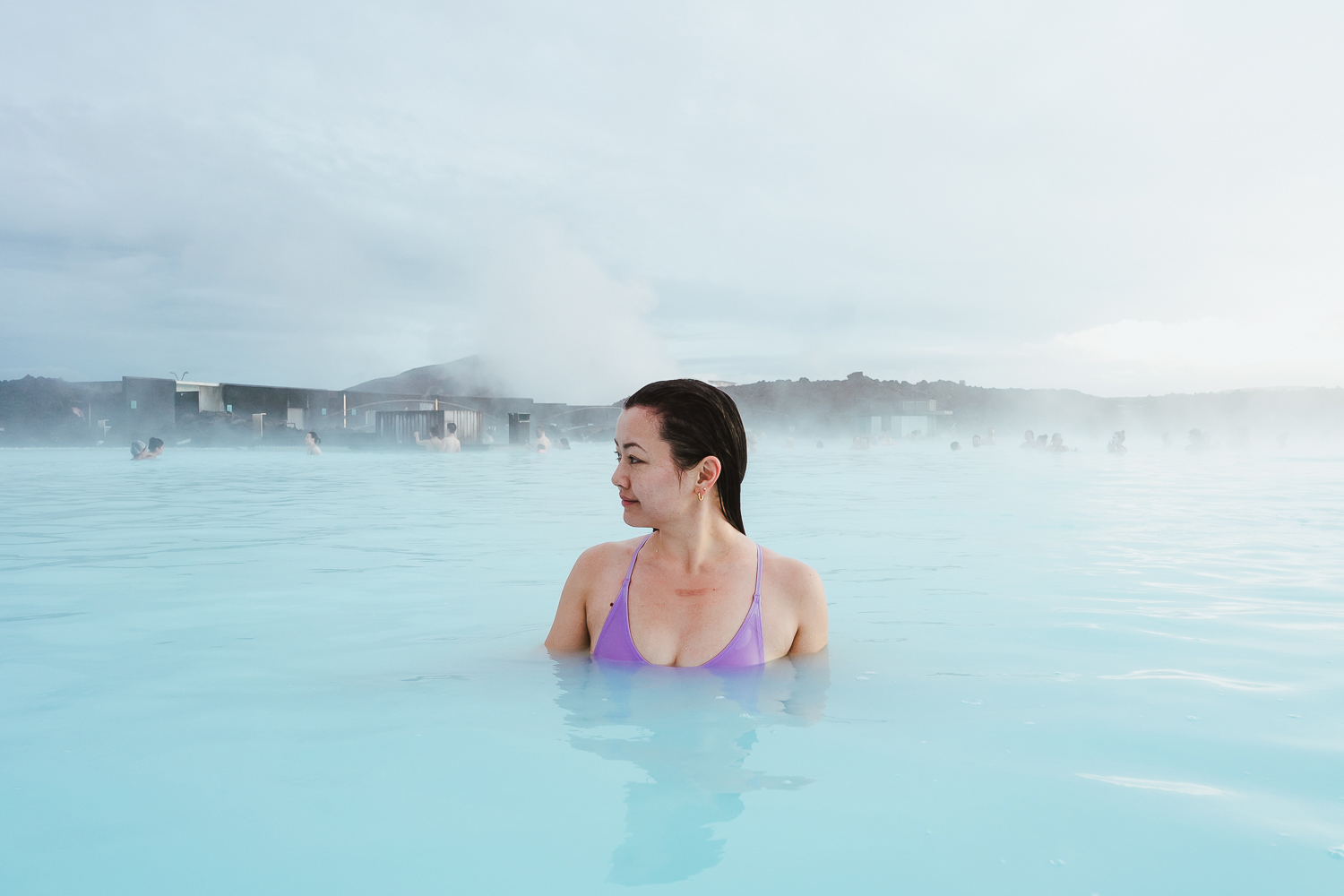 The next morning, we made our way back to the capital.

There were a few sites we missed on the way to Vik, partially due to the limited daylight, but more so because we were anxious to make it to our first night’s accommodation. This time, we filled in the gaps.

We made a quick stop by Reynisfjara, Iceland’s most well-known black sand beach, just at the foot of the village. The air was icy and my fingers felt close to falling off as we snapped a few photos before heading up to the church.

Halfway to Reykjavik is a remote, geothermal hot spring known as Seljavallalaug. It’s a maze of a drive off of the main road, with plenty of twists and are you sure we’re going the right way moments. It also might have involved a bit of light off-roading that our rental car company explicitly told us was outside of our rental agreement. Whoops.

Luckily, there were several barely-legible signs pointing us in the right direction, despite Joel’s concerns that local teenagers had placed them there to confuse tourists.

The spring was located just a short hike through the valley. The pool peaked out behind the final bend, embedded deep into the body of the mountain.

An English couple was already well at work wadding through the dark waters. I stepped inside the “dressing room” (I use that term loosely) to change. The cool air prickled my skin as I lowered myself into the warm pool.

We continued our drive westward, stopping only to pet some Icelandic horses that had wandered to a road-side fence. While there are plenty of horses (and sheep and cows for that matter) hoofing around most fields, they’re usually farther back from the highway and require trespassing to get close to. These ones happened to be close to the edge, and we couldn’t pass up an opportunity to see them up close.

We made it to Reykjavik just shy of sunset. I checked us into our apartment, a pseudo “castle” building located just a few steps from Tjörnin Lake. Our first order of business was to pick up our Iceland Airwaves wristbands and procure some liquor for the weekend ahead.

It turns out that alcohol in Iceland is really expensive. I was told this beforehand and intended to purchase some at the airport like a good, well-informed tourist, but couldn’t be bothered after a 9-hour redeye. How bad could it be in town, anyway?

REAL BAD. Like, Las Vegas bad. The small bottles of Absolute and Smirnoff peached on the shelves at Vínbúðin (the only licensed liquor store in the entire country) ran about $50. $50!

We grabbed a small flask of local liquor, a few Icelandic craft beers, and the cheapest six-pack we could find. Next was a trip to Bónus. This was our first time in this particular grocery chain, and we learned another hard Icelandic lesson: budget stores are not all made the same.

We had been doing the majority of our shopping at Kronan, a so-called “budget” grocery store, where a half-dozen eggs will run you $5-6. I chalked it up to the Icelandic pricing model. Turns out, Bónus stocks all the same products, but for half the price. TIL.

Wallets emptied and stomachs grumbling, we tried our luck at Baejarins Beztu Pylsur, the famous hot dog stand in Reykjavik, frequented by international celebrates like Bill Clinton and Metallica and what is presumably most of the Icelandic population.

I thought it was tasty, but not discernibly different from the N1 dogs we had been snacking on throughout the trip so far.

After returning to the apartment, we freshened up (read: shotgunning local lagers), and left to start our night at the Reykjavik Art Museum.

Iceland Airwaves is the country’s largest music festival. It’s sponsored by both the city and Icelandair, the latter of which offers plenty of cost-efficient packages to encourage foreigners to attend (we were such foreigners). It’s not a typical festival confined within a single grounds, but rather, is sprawled throughout Reykjavik—in concert venues, coffee shops, local churches, and even (where we were headed) art museums. The event attracts both Icelandic and international artists.

We started the night with back-to-back electro-pop performances by Hidur (a local Icelandic artist) and Anna of the North, a Norwegian singer with a growing international presence (you may have heard her in “To All the Boys I’ve Loved Before”).

Later, we crammed ourselves into the basement of Hard Rock Café (yes, they have those even in Iceland) and bowed down to the prowess of Alyona Alyona, the hottest new presence in the Ukranian rap scene.

She was followed by Madame Ghandi, an LA (!) activist-percussionist-singer who previously 1.) drummed for MIA and Khelani 2.) was the first data scientist at Interscope Records 3.) received her MBA from Harvard and 4.) ran free-bleeding in a marathon to raise awareness of period stigma in other countries. Talk about goals.

What ensued was a feminist-focused spoken-word performance intertwined with beats and performances from her new EP. I was equally strange and lovely and very unexpected.

With a successful first night at Airwaves under our belt, we returned to the apartment for some much-needed rest.

There’s nothing better after a morning out than a visit to an Icelandic geothermal spa. That, and maybe a breakfast burrito.

The Blue Lagoon is probably one of, if not the, most famous destinations in Iceland. It’s a man-made phenomenon, a byproduct of the Svartsengi geothermal plant. This makes it sound a bit like you’re floating around in unnaturally blue toxic waste, but the water is actually very good for you. The white, silica mud found at the bottom is great for skin, as is the salt and algae swirling around beneath the murky surface.

There are two swim-up bars located at either end—one for drinks, and the other for mud-masks.

The pool itself is massive. Blue waters stretch out in every direction, the edges concealed by a layer of fog formed by the plumes of steam rising up from the surface. The water hovers at around 100F, just a few shades cooler than a traditional hot tub. This means that you can stay warm for quite a long time without ever feeling overheated.

After enough soaking, masking, and smoothie-drinking, we returned home. Joel stayed in to cook himself lunch while I wandered out to Laugavegur, the main shopping/eating/partying street in Reykjavik.

The center felt very uncrowded, and the chilly air and blue skies overhead made for a pleasant stroll. I popped in and out of a few shops and marveled at the Nordic architecture. Reykjavik felt a lot like a grown-up village.

For our final night of Airwaves, we stationed ourselves at Laugardalshöll, a large, covered stadium featuring the biggest acts of the festival. We listened to an indie-electro opener known as Vök, then the main headliner—as well as Iceland’s most famous musical group and our main reason for coming to the festival—Of Monsters and Men!

This was our third time seeing them, and like all the other times, they absolutely killed it. We were just a few rows from the front thanks to the calm and kind nature of Icelandic music festivals (AKA the opposite of Coachella brats) and had an absolute blast up close.

The night ended with confetti-filled balloons and a heart-felt, sit-down encore.

We didn’t have many expectations coming into Iceland Airwaves, but it by and far exceeded our expectations. It was so different from our usual shoulder-to-shoulder festival experience and we had a great time discovering new artists—everyone we saw perform put on a stellar show. I also loved how deeply integrated the festival was with Reykjavik itself.