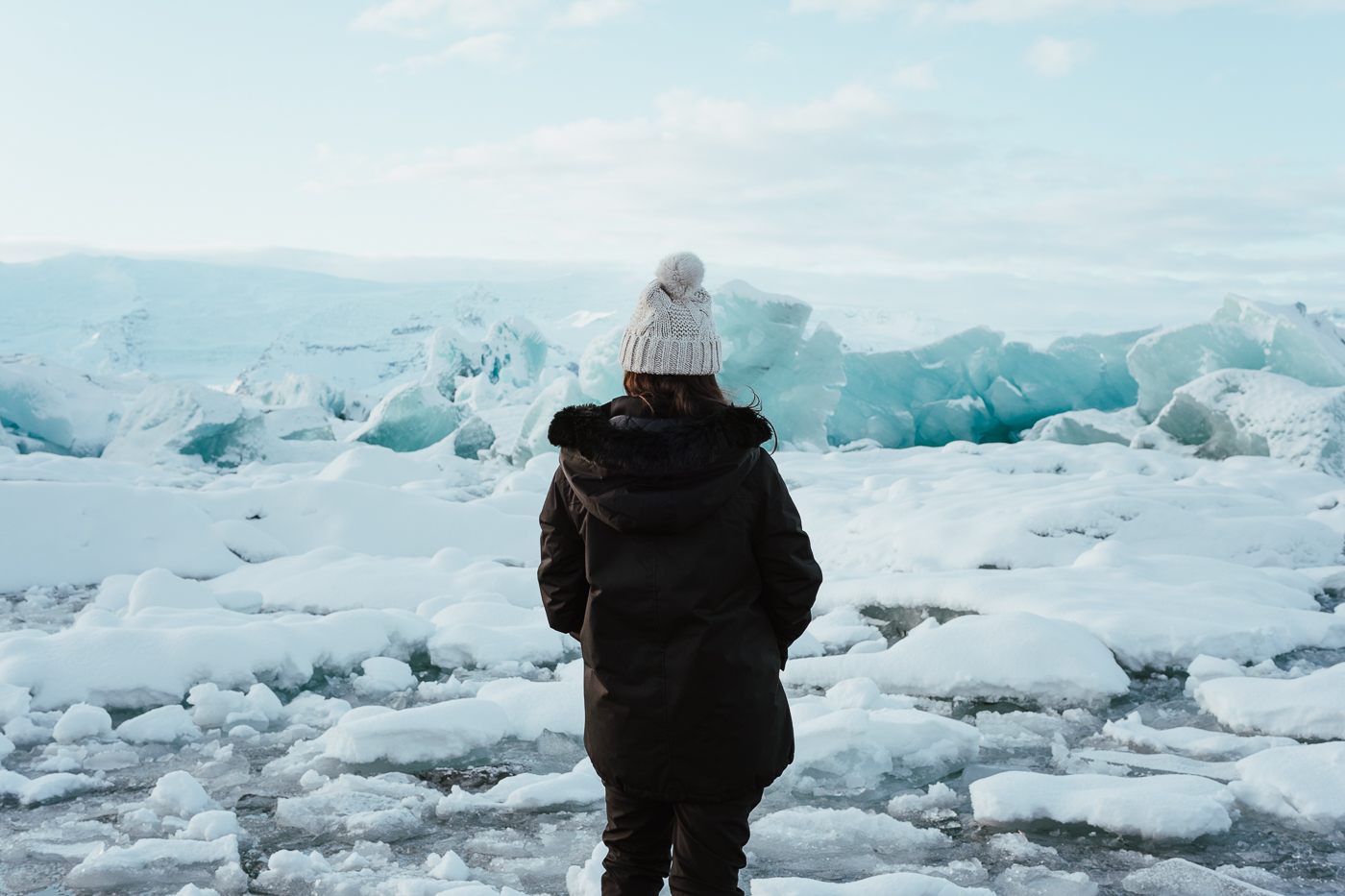 I don’t remember when Iceland first landed on my life list, but it’s been a long time coming.

Joel and I had originally planned a visit back in early 2018, but were forced to reschedule due to logistical issues (AKA losing both of our licenses on a metro car in South Korea). With over a year and a half having passed since our last international trip together, we decided it was time to finally visit the land of Ice and Fire.

As per tradition, we hit the ground running on day one.

Our red-eye landed us at Keflavik airport just past 6am. Cold air rushed in from the tarmac. Darkness flooded our surroundings, and my body’s internal clock felt shaken and jarred.

We ordered a quick coffee from the sole convenience store open at this hour and boarded a FlyBus to Reykjavik.

The car rental company picked us up from the main bus terminal and brought us straight to the Go Car Rental office located just outside the city. They handed us the keys to an army green Suzuki Jimny, and we hit the road just after sunrise.

We had heard more than enough rumors about Iceland’s pricey restaurant scene prior to arriving, and so our first stop on the itinerary was a grocery haul at Kronan.

Grocery stores are one of my favorite ways to set my bearings in a new country. Especially in places where the tourism barrier can be difficult to breach, they provide a little peak into the local customs. There are so many details and nuances among things like packaging design, store design, and common ingredients. It’s like a mini cultural treasure hunt.

I bought an egg sandwich and a coffee from the adjacent café. Upon initial inspection I was worried that I had accidentally ordered something with mayo in it (my worst enemy), only to quickly realize that the creamy spread was actually my first introduction to smurostur, a popular Icelandic cheese spread.

Iceland’s notoriously unpredictable and unkind weather was gracious to us today, and we coasted along the rural highway under blue skies. Amber fields stretched out in all directions. Sweeping hills capped in jagged lava rock loomed over long-abandoned sheds, with flocks of seagulls circling from above. I was in love already.

Seljalandsfoss is the first major waterfall found along Iceland’s south coast when driving east. We arrived around lunchtime. I was still in my plane outfit and wasn’t fully prepared for the cold, so I spent much of our visit puttering around with a hot chocolate in hand, hoping to warm up.

Our next stop was Skógafoss, a massive waterfall located just off the Ring Road.

The lady at our rental car office recommended visiting Dyrhólaey, a former island and current lookout point over the famous black sands of Reynisfjara.

The landscape was truly other-worldly; I felt like I had stepped onto the set of The Martian, with blacks, blues, and yellows swirling together, and a cascade of golden rock jutting up over the shore.

We found our accommodation just a mile’s drive from the beach.

The Barn is a modern hostel cloaked in moody Scandanavian decor—a shining example of Nordic hygge and perfect for a winter’s evening spent indoors.

After checking in and resting from the long drive (we were functioning off of 3 hours of flight-quality sleep), we made our way over to Sudur Vik at the recommendation of our hostel.

This was our first experience with Icelandic restaurant prices, and no, people weren’t exaggerating.

We ordered a shared plate of fried camembert, a small plate of lamb, and a bowl of seafood chowder. The restaurant was fairly casual and the total bill still came out to $71!

We returned to the hotel soon after and finally, after two back-to-back days of travel, slept.

We planned on leaving around sunrise (9:30am), but were surprised to find that we had more light than expected—since Iceland is located so far north, dawn and dusk last nearly twice as long as back home in the States.

By 8am, a lazy blue light cast its reach over the vastness around us, revealing a thin blanket of snow that had fallen while we slept. The distant mountains had transformed from an orangey-yellow to bright white. A sprinkle of snow was still falling gently from the sky.

We ate a quick breakfast of bread, pesto, and instant coffee in the kitchen hostel and departed for Hof.

Our first order of business was a grocery top-up. Later down the road, we refilled on fuel at a local N1, and took the opportunity to try our first Icelandic hot dog: a mash-up of beef, pork, and lamb coated in crispy onions and various sauces. Although it’s fairly tasty for what it is, I suspect that its popularity is somewhat connected to the fact that it’s one of the island’s only affordable hot foods.

Iceland’s Ring Road is fairly short in terms of rote mileage—it would take you longer to drive from San Francisco to San Diego and back than to complete the entire loop in one go.

Yet, it takes most people 1-2 weeks to finish the trip, simply because there’s just so much to see. Not just the main sights, but all the little crevices and hillsides that you pass on your way between; the tumbling waterfalls at every turn and the crumbling homes that have slowly been swallowed up by the land. It’s difficult not to stop every few feet.

And then there’s this incredible sense of isolation. There might be a sentiment that Iceland’s magic has slowly dwindled as more and more tourists arrive every year, but out on the road in our tiny SUV in the dead of winter, I’ve never felt more removed from the world. The countryside is still very wild and raw.

Halfway through our drive to Hof, we peeled off the main highway to go explore Fjaðrárgljúfur Canyon (try saying that three times fast, ha). This was the same canyon that Justin Bieber made famous and has since been closed periodically to avoid further damage caused by the influx of tourists that have visited since.

Next, we stopped to visit Skaftafell, an area of Vatnajökull National Park. Joel and I hiked up to a well-known waterfall and tried taking a cute photo over the stream beneath it, only to fall through the ice right after. Luckily, the water was shallow and we had waterproof boots on.

The sun started to set soon after and we spent the rest of the night at Fosshotel Glacier Lagoon, dining on lamb sandwiches in our room while watching reruns of The Office (which are technically initial-runs for me, since I’m still working my way through the show for the first time). We also took advance of Iceland’s unofficial 2-for-1 happy hour policy.

Iceland is home to the largest glacier in Europe: Vatnajökull, or “Fat Yogurt”, as our guide liked to put it.

We filled up our hotel’s breakfast buffet (where I may or may not have stashed some extra smoked salmon for sandwiches later) and headed out early to meet our tour group at the edge of the park.

A group of guides got to work fitting us with crampons (shoe attachments fitted with metal spikes so you don’t go sliding off the top of the glacier), then boarded an off-roading bus to take us out on the ice.

The tour lasted for about three hours total. The first half was spent hiking around the glacier, and the second part consisted of two ice caves.

Ice caves were one of the main reasons I wanted to travel to Iceland in the winter (that and the Northern Lights, which sadly eluded us during this trip), and they turned out to be a bit of a disappointment. The tour was so rushed that I barely had time to take a photo of the cave, let alone appreciate it in the moment. They were also a lot darker and smaller than I expected (you couldn’t stand upright in most parts).

After the expedition, we drove an hour north along the side of Vatnajökull (yes, it really is that large), right up to the glacier’s edge. Here, large chunks of it melt away into what’s known as the Jökulsárlón Glacier Lagoon. Across the road was Diamond Beach, where these pieces eventually disappear into the Arctic Sea.

This was probably my favorite part of the whole trip; although walking on and inside of a glacier is a special experience, you can’t really appreciate the full beauty of it all until you’re face-to-face with a lake of icebergs.

We returned to The Barn for the night after grabbing a quick dinner at The Soup Company in Vik proper.