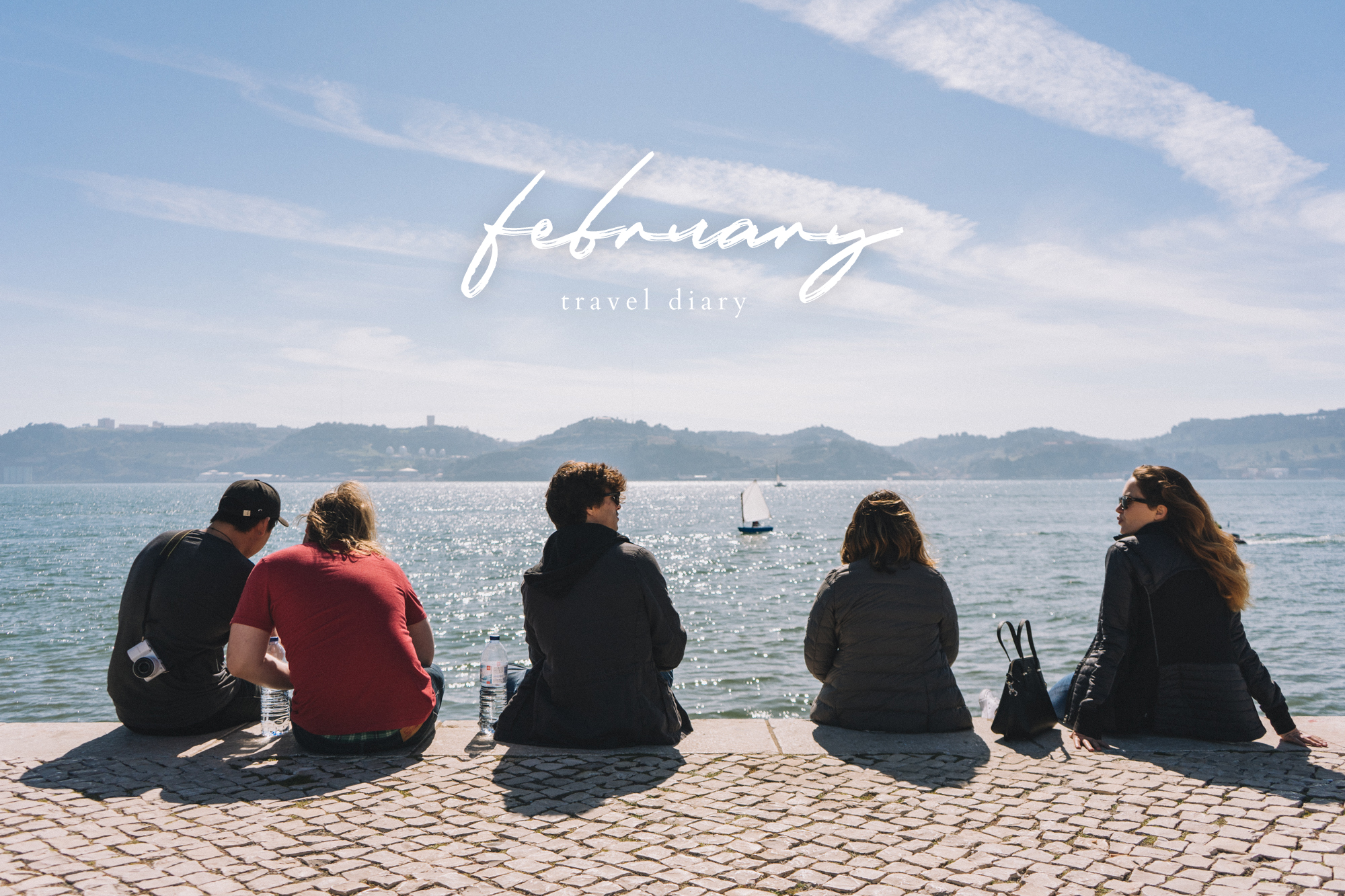 I’ve been a little MIA on here for the last few weeks. There are a few reasons for this.

First, I’m working hard on a project that I’m getting ready to release soon! It’s all about addressing one of the biggest questions that I’ve gotten from the last few years while planning our RTW trip—how exactly do you afford to travel so much?

I’ll reveal more later, but it’s sufficient to say that it involves a lot of writing and editing, and while I love posting regularly on this blog, I think this project will be really helpful for you guys.

The second reason I’ve been slacking is that Joel and I recently met up with a group of his high school friends from back home. We’re taking on Portugal and Spain together over the course of three weeks, and while I typically love the combination of traveling on a half-day schedule and getting home to work on writing/photography/etc., I really want to use this time to focus on people.

I don’t want to opt out of sightseeing because I feel like I have work to do, or use evenings to write instead of hanging out with each other or checking out the local nightlife. It’s rare to spend time with a group of people like this after you leave college, and for the last week I’ve been enjoying just letting go and having fun traveling, instead of always worrying about what’s best for the future.

I know what you’re probably thinking: Shouldn’t I be doing that all the time, anyway?

But in reality, when you’re a long-term traveler, your vacation is no longer a vacation—it’s just life. So you need time to slow down, get reacquainted with a routine, and be productive at times (or maybe that’s just me, haha). So I guess you can say I’m using these three weeks as a vacation from my vacation!

So there you have it. I’m still working on things on the side, and keeping up with Instagram as well as my daily writing/drawing goals. But I’m being a little more flexible when it comes to choosing to stay out until and waste the next day away, rather than always turning in at a reasonable hour and getting an early start

It’s been fun so far, and I can’t wait to see where the second half of this trip takes us.

1. Paris for Valentine’s Day. This was my third time exploring Paris. My first trip here was during my semester abroad back in college, and every subsequent visit has left me more convinced that this is the most amazing city on earth. We happened to be visiting during Valentine’s Day, so of we had to plan a series of typical Parisian dates to celebrate. We started off with a market-prepared picnic in front of the Eiffel Tower (and nearly froze to death, but when in Paris, right?), snacked on Ladurée macarons on the Champs Elysées, and finished with a fondue dinner. A cliché and day spent in my favorite city.

2. Wandering the villages of Alsace. I’ve been dreaming of visiting this area of France for years now. We spent a few days wandering around Colmar, Strasbourg, and hiking through a vineyard connecting Riquewihr and Ribeauvillé. It was all exactly as beautiful and charming as I expected.

3. Eating our way through Porto. After spending the last three months freezing our way through a European winter, it was a nice change of pace to land somewhere with a more mild climate (Portugal is pretty similar to California). What I didn’t expect was to love the food so much! (See below for details).

4. Meeting up with new friends in Lisbon. We’ve had the opportunity to travel with a few friends over the course of our trip, but this will be the first time that we travel with so many people for such a long time.

5. Exploring Sintra by foot. Sintra is probably one of the most popular places to visit in Portugal (if you judge popularity by Instagram location tags, lmao) and it’s every bit as stunning in real life as in photos. We hiked an hour up the hill to the castle, wandered around the grounds and surrounding gardens, and finished off with a delicious and inexpensive set menu lunch in town.

6. Our awesome Airbnb in Lagos. Our Lisbon accommodations were pretty janky (only two of the outlets worked in the entire apartment, the electricity never worked in one of the bedrooms, and we sipped on beers by candlelight one night during a blackout), so by the time we arrived in Lagos it was a major upgrade. The apartment was spacious, new, and had its own pool and jacuzzi! It felt a lot like the retreats we used to go on when I was in AKPsi back in college. We cooked dinner together, stayed up playing card games, and made the best of being rained in for two days straight.

1. SO MUCH RAIN! The weather was rough this month. Paris was cloudy and misty all week, and our last three days in Portugal were met with storms (which really sucked for Lagos, considering it’s a beach-resort town). Our last few days were spent in Seville and we haven’t had too much of a chance to explore because it was so hard to walk around. And Seville is supposed to be the hottest and driest city in Europe! (Also, as I’m writing this, we’re getting ready to leave for Granada, and it’s finally super nice out here. Go figure.)

2. Feeling financially limited in Switzerland. Cities around the world feel more or less expensive depending on where you live back home. I always felt that the warnings about prices in most places were over-exaggerated (Tokyo, for example, isn’t nearly as bad as I expected), which is because I’ve lived in the SF Bay Area for the last decade. Zurich was the only city I’ve ever felt to be truly ridiculous in terms of cost. You literally can’t even use regular budgeting tactics to travel cheaply here—walking around for free, staying in a hostel, and eating off of groceries will still cost you upwards of $50-60 at a bare minimum (a precooked side of rice from the grocery store is $5 and an espresso is $3). It felt like we were blowing money just to survive for a few days here.

1. Falafel in Paris. Las du is one of my favorite restaurants on this planet. I kid you not. I tried my first ever falafel ball here five years ago and never found anything quite so amazing in any other part of the world since.

2. French pastries. I was going to make separate categories for this one until I realized that my “Best Eats” section was getting a little too long. My favorite croissant place (Blé Sucre) + Pierre Hermé macarons + just about everything else I ate while in France was absolute heaven.

3. Fondue dinner. Dipping things in cheese is 100% my jam. The place we went to on Valentine’s Day was really delicious and I left stuffed full of bread chunks, bubbling gruyere, boiled potatoes, and mini pickles. Mmmmm.

4. Portuguese Francesinha. This Frankenstein of a sandwich tastes so much better than it looks. It’s served with a mysterious and somewhat unappealing appearance to it (a cube of something-or-other smothered in cold tomato soup, if I were to guess just by looking at it), but it’s amazing. It’s the Portuguese take on a croque-monsieur: various cuts of meat sandwiched between two slices of thick cut bread, covered in melted cheese, and drowned in a delicious tomato-beer sauce. Traditionally served alongside fries and best followed by a good nap.

5. Egg tarts. O-M-G. Egg tarts (nata in Portuguese) in Portugal are no joke. We went to this chain called Manteigaria and it was one of the most incredible things I’ve ever tasted. The pastry was flakey and buttery like a warm croissant and the filling was sweet, eggy, custardy goodness. I had 3 on our first day (which at 250 calories a pop is saying a lot!).

6. Set menus in Portugal. Portugal is hailed as the cheapest country in Western Europe, and for good reason. You can get set menu lunches around the country for €3-8 and it’s always delicious and always way too much food. One of the best value (and best tasting) sets we had was a pitcher of red wine, cabbage soup, bread rolls, ribs with fries and rice, and rice pudding for €7.50.

7. Home-cooked dinners in Lagos. Because we had such a nice apartment in Lagos, we decided to all go grocery shopping together and make our own dinners at home (does anyone else find grocery shopping in groups to be way too much fun?). The food we made was delicious and the meal was of course spent in good company.

We’re currently making our way through southern Spain. Then we’re returning to one of my favorite cities in Europe, Barcelona, before ending our time in the country with a stop in Madrid

two weeks following will be spent in Morocco, which I’m SO EXCITED FOR, especially since the culture will be so different from anything I’ve ever experienced before. Then it’s off to South America for the first time!