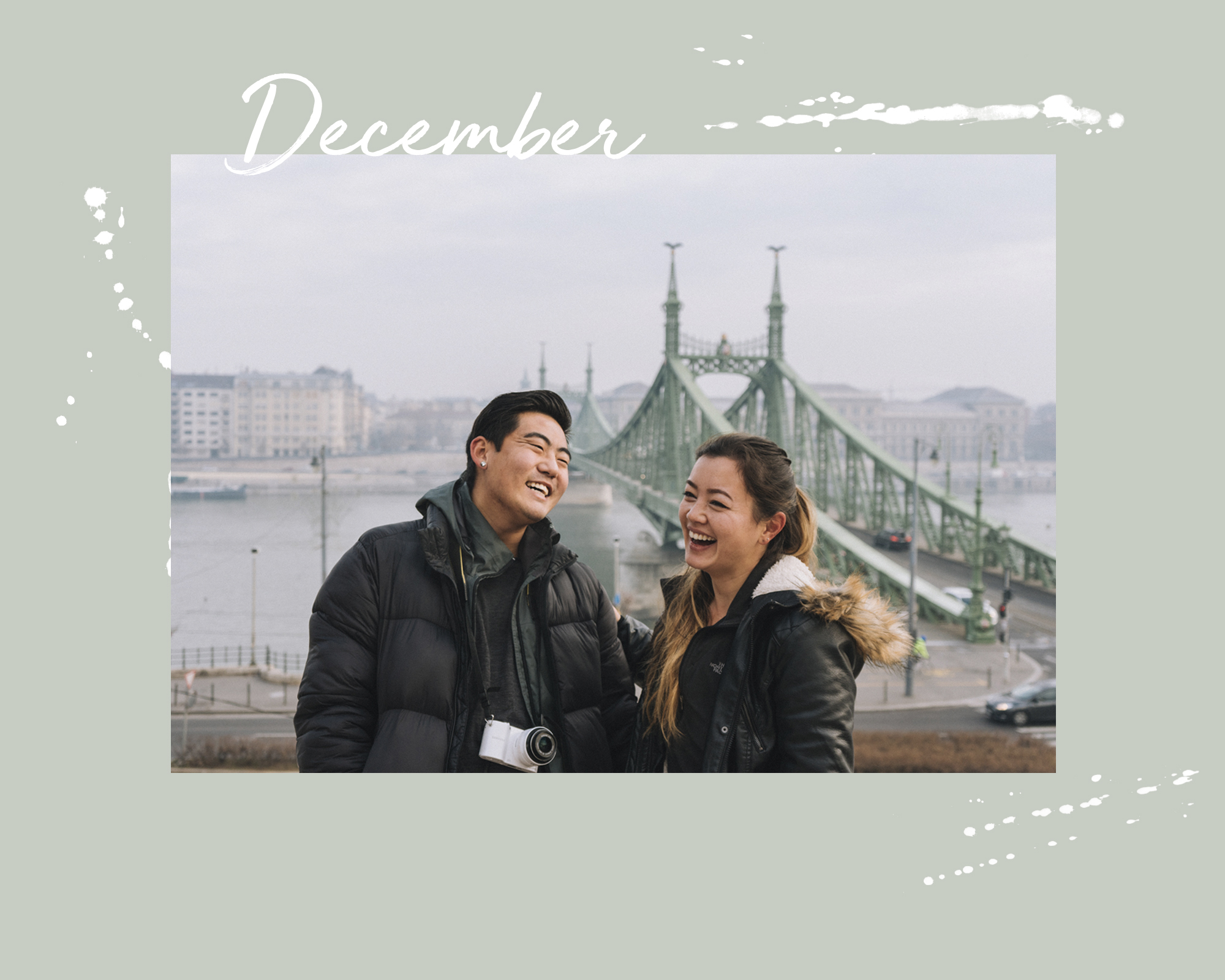 Six Months on the Road

December officially marks the halfway point of one year around the world!

The last leg of 2017 was a little more relaxed than the previous five months. With the holidays rolling around and finally entering Europe, we’ve been taking it slow. We started off in Bulgaria, spent two weeks trailing around Romania (including Dracula’s castle!), saw our first (and last) snow of the year, gaped at the regal architecture of Budapest, and then lazed around Vienna while businesses shuttered up for Christmas.

I’ve been reflecting not only on this trip, but on my time as a mid-twentier (I’m already 25, please make it stop) and how this stage is panning out. So far, my life doesn’t look anything like my friends lives or what I thought I’d be doing by this age when I was younger, and that’s terrifying. But it’s also really exciting, because I know that I’m at least chasing goals that are right for me.

Doing things differently is risky business, and certainly lonely at times. I’m so grateful to have Joel by my side (and no, we haven’t killed each other yet), but I’m really starting to miss my family and friends back home. Maybe it’s just the holiday simp fairy paying its annual visit, but if there’s one thing that this year has taught me, it’s how much I treasure the loved ones in my life. (P.S. If you’re reading this and wondering why I haven’t called, it’s not you, it’s our crap hostel wifi.)

1. First Time Couchsurfing! If you’ve never heard of it, Couchsurfing is an online community similar to Airbnb, except that there’s no payment involved, and the hosts are actually home. The entire philosophy is also different (hint: it’s not just about a free couch to crash on). I’ll probably get into it more in a future post, but let’s just say that I’ve been itching for a long time now to give it a go. I finally had the guts to hit the request button for the first time while traveling to Bucharest—and got accepted right away! Speaking of: Dear Hakan, thank you for inviting us into your home even though we had zero reviews and could have very likely been ax murderers. You have restored my faith in humanity. Cheers! Seriously though, the couple we ended up staying with (a Turkish man and a Romanian woman) were wonderful hosts, and it was such a cool opportunity to hang out with locals. They even made us dinner and breakfast!

2. The Ultimate Romanian Bathhouse Experience. one for Bucharest: Therme! Some places are known for their bathhouses (think Japan, Korea, Budapest), but Romanian spas are seriously a level above anything else I’ve experienced. We paid $20 each for 3 hours of unlimited access to twisting water slides, tropical steam rooms, light therapy beds, swim-up bars, and—my favorite part—an outdoor thermal bath. We swam up to the edge, feeling the icy winter air on our faces, and watched the clouds of steam rise up over us as the sun set the horizon ablaze in a rich gradient of pinks and blues. Bliss.

3. Christmas at the Ritz-Carlton. I’VE BEEN WAITING MY WHOLE LIFE FOR THIS. It’s kind of taboo in the budget travel world to value fancy things over “real” travel experiences (don’t even get me started on the whole “traveler not a tourist” concept), but it was an incredible experience just to be pampered for a bit. After six months of sharing dorms with everyone from roommates who snore to guys who tattoo each other in bed (this really happened), we finally had a full, three days to live in our own little world of luxury. And it was perfect timing, since everything in Vienna closes down for the days surrounding Christmas. We spent our time just hanging around the hotel, enjoying all of the amenities and comforts that have recently become so foreign to us. I think I’ll miss the personal espresso machine the most. The best part? It was all freeeeeeee!

4. All the Christmas Markets. Ya girl is a true hot wine addict and I pretty much scheduled our entire trip around making sure we were in Eastern Europe by December. These markets are the physical manifestation of : the smell of fat brats and smoked pork, giant gingerbread hearts dangling from stands, and of course, the intoxicating aroma of cloves, cinnamon, and oranges melting down into a swirling vat of red wine. The all-stars of the season were in Cluj-Napoca, Budapest, and Vienna.

5. Celebrating New Year’s Eve in Vienna: We ended up staying in Vienna through the end of 2017, and I’m so glad we did. The city holds a massive street party every year (Silvesterpfad) with performances and vendors. We joined the celebration outside of City Hall, and spent the evening eating sausages and dancing around to American (?) music by a live band. The countdown ended in a grand fireworks display and Coldplay’s “Clocks” playing from the stage. It was a really beautiful way to welcome 2018, and also a really terrible reminder that I’m getting way too old to finish half a fifth of vodka in a single night.

1. A LOT of things going wrong in Romania. I wanted to visit this country for years, and I still thoroughly enjoyed our time there and would go back if I had the the chance, but man did we take a lot of L’s: we missed out on exploring a lot of Sibiu and Cluj-Napoca due to my poor planning. I nearly (and might have actually) broke my toe in the kitchen of our Airbnb. Our bus from Baia Mare never came. The Turda Salt Mine was under renovation and we ended up trekking an hour through muddy backroads just to find the other entrance. Oh, and it literally flooded on our first day in Breb.

1. Langos in Budapest. A classic Hungarian street dish. It’s essentially a giant fried frisbee (reminded me a lot of youtiao in Hong Kong) topped with cheese, meat, and whatever else you can think of. Mine had spicy chicken and was b-o-m-b.

2. Sarmale in Breb (actually, everything in Breb). I mentioned above that our time in Breb didn’t go as planned—we were pretty much trapped on a farm and couldn’t explore the surrounding areas like we originally wanted. There was only one activity left for us to enjoy: eating. And eat, we did. Our homestay family made us a fabulous breakfast and dinner on both days, all made entirely out of ingredients they either grew or raised on their own farm, or from their neighbors’ farms. The best part was the mountain of sarmale (Romanian cabbage rolls) that they served us on our last night.

3. Pork knuckle in Sofia. If there’s one word to describe Eastern European food, it’s heavy. I remember one dish in particular: stewed pork knuckle, oozing cheese, and buttered mushrooms, stirred together and eaten as-is. The epitome of comfort food. It was perfect for a rainy winter’s day in Sofia.

4. Late night nachos and drinks at TGI Friday’s (don’t judge me please). Joel and I try our best to eat locally when we travel, but sometimes, eating locally costs stupid amounts of money. And you’re also craving a piece of home. So you end up at an American food chain on the day before Christmas Eve, sharing a surprisingly delicious bowl of nachos, and washing it all down with an Austrian beer. So sue me.

Now that Christmas is over and we’ve had some time to rest, I’m ready to get back into full travel mode. We’re currently in Salzburg (guys, this place is STUNNING), passing through Slovenia soon, then spending a solid two weeks in Croatia, all before taking a ferry across to Italy. I also have a lot of 2018 goals I have in mind, like getting my exercise on again, writing and drawing , an actual skincare routine

P.S. I’m also starting a newsletter next week. Inside you’ll find lots of fun, travel-related info to entertain you on your Friday commute to work, and to give a little for the weekend ahead. Make sure you sign up so you don’t miss out! 🙂