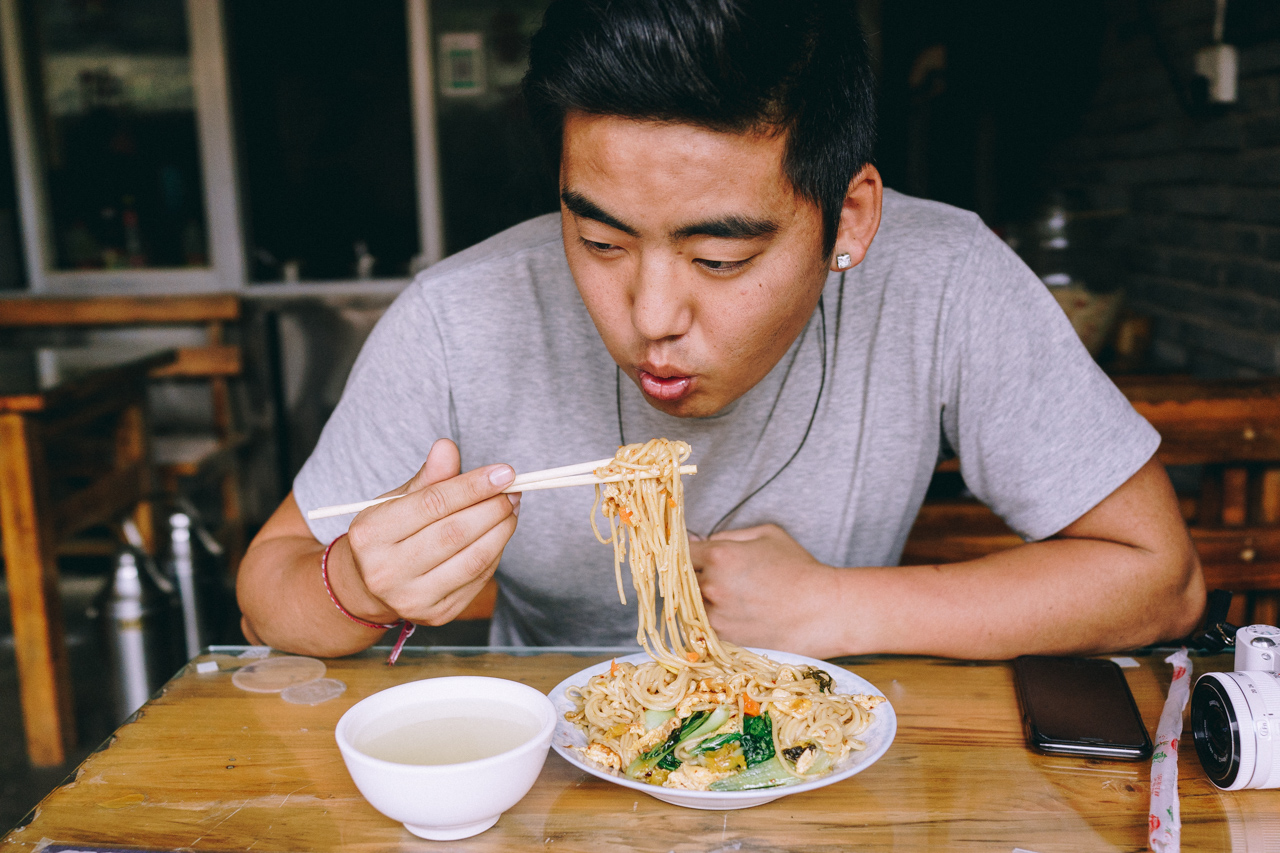 The other day, I wrote a post about what it felt like to come back to America after a year abroad.

One of the questions I got in response (besides a lot of smart-ass replies like “sooo how did it go?!”, VERY FUNNY GUYS), was:

How was it, traveling with Joel?

This was another topic that came up a lot over the year. With friends over FaceTime, with random taxi drivers, and even with my mom (her, at least once a week: “How’s Joel doing? Are you guys okay? Where is he right now? Why aren’t you guys in the same room? Is something wrong?”).

A year ago, when Joel and I were revealing to all our friends and family our plans to take a trip abroad together, we got a lot of concerned reactions.

“Really? A whole year? With…each other?”

Never mind that we had dated for a year prior without incident. Taking a trip with someone even for a week, let alone a year, was considered the equivalent of publicly declaring your future intentions to marry this person.

There were a lot of people who I could tell were afraid to ask, hesitant about whether or not it was their place to even question it. Long-term couple travel (at least, for those who haven’t publicly committed, i.e., put a ring on it) isn’t all that common, and I think a lot of the people I spoke with weren’t even sure if it was worth questioning. When you don’t know a lot about a subject and haven’t seen many others who have experienced something similar, self-doubt starts to creep in.

For all of you, both those who have vocally expressed their curiosity and concern and those who have kept their thoughts private, my answer is pretty anticlimactic:

What?! C’mon Anna, give us the drama!

Riding camels through the desert

To be honest, there wasn’t any. Sometimes we got frustrated when we couldn’t agree on a place for lunch or it was really hot outside and we snapped at each other for no reason. But these weren’t very common occurrences, and certainly not any more so than what you’d expect of an average couple who isn’t spending their free time riding scooters together in Hanoi.

Here’s the truth about traveling with someone abroad: if they’re the right person for you, and you’re not a travel diva, it’s not going to be that much different from spending time with them at home. Joel and I both have relatively laid-back personalities and bounce back quickly from setbacks, and that was as helpful for us on the road as it was back in California. I think people like to build up couple travel as a bigger deal than it really is. Joel and I had already spent a good amount of time seeing each other for extended periods of time (we were long-distance before, so our time apart was balanced with several days of constantly-at-your-side interaction twice a month), so traveling was really just an extension of this, only instead of San Francisco or Santa Barbara or Los Angeles, we were in Tokyo, or Istanbul, or Lisbon

They say that the ultimate test of a relationship is travel, and I know a lot of relationships tend to fall apart as soon as they hit the road. Even a one-week vacation at a resort in Cabo can be too much for some. My opinion? If it’s even remotely difficult for two people to travel together, the relationship has an expiration date

would add that it’s not just travel that challenges couples, but any type of mutual experience where your world is suddenly turned upside-down. This is where you learn whether the two of you have what it takes to make it through the tough times. Relationships are easy when you have money, you’re mentally healthy, you’re not throwing up your guts after eating something questionable at Iguazu Falls, and no one close to you has died.

with the right person, being with them should still be easy, even when all those things do happen.

don’t suddenly become a different person just because you get on a plane for 8 hours. Your relationship, therefore, should not change much. Maybe it will grow stronger, maybe you’ll learn to be more patient—but if you go from zero to throwing the hostel’s dishes across the kitchen at each other while arguing over whether to use butter or olive oil for the pasta, something’s off.

It also helps tremendously that we have similar travel styles and complementary skill sets. We’re both advocates of the “plan to be spontaneous” style of itinerary (where you do your research and make plans, but are 100% willing to throw the everything away and go off book should a Saudi Arabian prince invite you to his dad’s penthouse).

While we both like this style of travel, I think it comes as a surprise to no one that I’m the more organized of us two. I enjoy the planning phase before a trip and I can easily keep track of important details, whereas Joel struggles a bit more in this department. On the other hand, I’m not great at interacting with strangers. People scare me (lol), while Joel is extremely extroverted. While I’m recording our expenses, he’s handling our cash and negotiating with shopkeepers. I help him talk about and reflect on his experiences, and he encourages me to get out of my comfort zone. In this way, we balance each other’s strengths and weaknesses. We’re a classic INTJ/ENFP match, and we make a great team.

So no, we didn’t kill each other.

But…did we get tired of each other?

Benefits of couple travel for Joel: Having your own personal photographer

Benefits of couple travel for Anna: Having your own pack mule

Again, no. Which I think is another hallmark of a strong relationship—you can be around each other without getting exhausted.

This is especially significant for me. I’m a fairly introverted person (not a lot of people know this because I technically classify as “outgoing” in a lot of social situations), and being around people is often tiring. I’ve never gotten tired of being around Joel, although I think it’s important to point out that we weren’t literally around each other 24/7. Oftentimes he would go for a jog while I stayed at the hostel to write, or he’d be upstairs laying in bed while I hung out in the dining room downstairs. We were always close, but not necessarily together. I think that helped a lot

We did discuss the prospect of traveling solo before leaving, but it just never really happened. We always wanted to see the same places and never felt that we needed some genuine time apart

It is something that we still want to experience, and in the future, we will likely take trips on our own just to see what it’s like. Being a couple doesn’t mean that you have to do everything together, all the time—even when it comes to travel

hope this clears things up. All considering, we had a great year together, and I encourage anyone who’s thinking of traveling with an S.O. to go ahead and take the leap. At the very least, you’ll learn a lot about each other, and you might just come home with some of the best memories of your life.