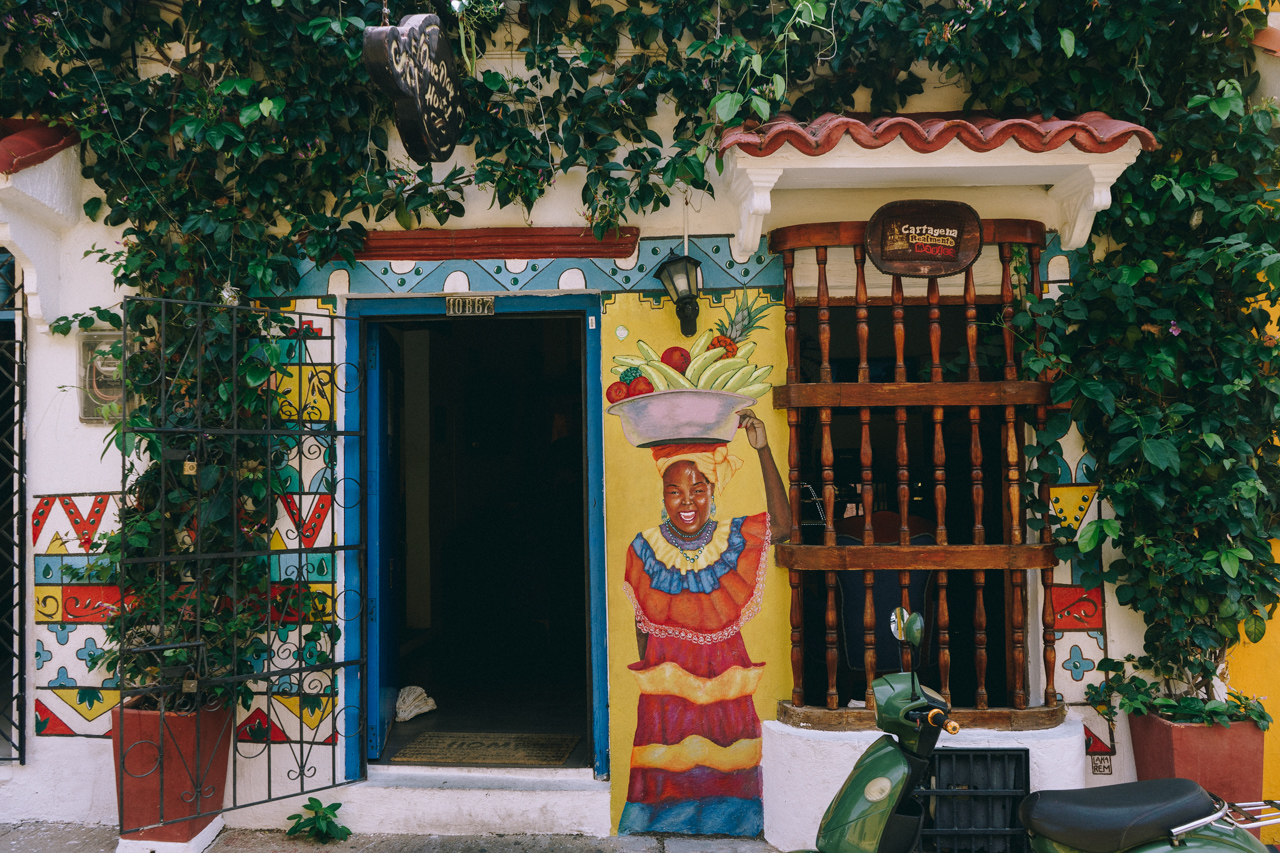 After spending nearly a year abroad, Joel and I found ourselves in Colombia—the last country of our trip.

Colombia has been on the peripheral of most travelers’ radars for a while now. The country is still plagued by its violent history despite dramatic efforts to improve the standards of safety for both locals and visitors. Most people who end up here have decided to come via word-of-mouth, from friends and acquaintances who tell them they just have to visit when they come to South America.

We had just three weeks to discover what exactly was making everyone so excited.

Our first stop is Colombia’s capital, Bogotá. Massive, sprawling, and jam-packed with sightseeing opportunities, we head out on our first day to explore the area around Chapinero. This is one of Bogotá’s most up-and-coming neighborhoods, as well as home to Librería Wilborada 1047, a hipster bookstore-meets-café located nearby our hostel.

We’re curious about the local fruit scene (South America’s produce game is on point), so we venture into a nearby market and I emerge with a tamarillo, or “tree tomato”. It’s intensely sour with the texture of a typical tomato and subtle notes of kiwi.

It’s time for lunch, and we decide on a trip to Piqueteadero Doña Segunda. It’s a casual food stand in a seedier part of town, with the line wrapping around the building, and locals mingling in the midday sun

We order a combination plate that’s large enough for two: blood sausage, offal, arepa, and potatoes are all swimming in grease next to a serving of chicha (a fermented corn drink) and herb sauce. It’s heavenly. The entire meal sets us back $1.50 a person.

Later we visit La Candelaria, or the historical old town. Here, the buildings are vibrant and eccentric, a stark contrast from the gentrified area where we’re staying.

It’s Sunday morning and the streets are packed. In the heart of La Candelaria, the energy is electric, with performers showing off to the crowds and street vendors offering samples of fresh coconut and pineapple.

Plaza Bolívar sits just outside of the chaos, with the Primatial Cathedral of Bogotá towering over the sparse layer of onlookers.

We visit two of the city’s most famous museums: Museo del Oro, and Museo Botero. We’re infinitely more fascinated by the latter, which is housed in a beautiful mansion with white walls and a beautiful courtyard.

The main attraction of Museo Botero is, not surprisingly, Fernando Botero himself. He is Colombia’s most famous artist, and many of his most important works are displayed here.

Botero is known for his “voluptuous” style. Everything is disproportionate, curvy, and wonderfully whimsical.

After a few hours of museum hopping, we step into the first restaurant that catches our eye: an eatery filled with hungry locals and waiters serving sizzling plates of meat.

We order a large cut of steak, topped with a creamy mushroom sauce and served alongside more arepa and potato.

On Monday, we brave the trek up to Monserrate, the highest point in the city. Most people take the tram up to the top, so we’re surprised to find that the trail is absolutely packed

It ends up being one of the most difficult hikes of our trip. The trail is mostly stairs, and the air in Bogotá is very thin due to the altitude.

When we finally arrive at the top, we learn that today is a Catholic holiday. Monserrate is a religious site and Catholics are required to make the journey up to the monastery on foot. This explains why so many families (including small children) were walking up with us.

We return to the main city center and rest our tired legs at Puerta Falsa. This tiny hole of an eatery was made famous by Bourdain (RIP) during a trip to Bogotá. They serve chicken tamales larger than a small kitten.

Our last day in Bogotá is spent wandering around La Candelaria in a street art tour. We learn a lot about Colombia’s history and recent efforts to revive the country and restore its reputation.

We take a bus to Salento, the coffee capital of Colombia. It’s a small town with lovely, green hills sloping in all directions.

Our hostel has a patio with a view, and we eat breakfast out here each morning. I decide on a smoothie bowl topped with berries and coconut.

Horseback riding is a great (and not to mention, inexpensive) way to explore Salento’s coffee industry. Joel and I book three hours with a guide who brings us over streams, through forests, and eventually, to a nearby farm.

Our horses get a well-deserved break while we learn about the coffee growing process.

Our guide introduces us to the staff, and we’re lead on a tour around the property.

Joel chats with our guide while I busy myself with photos.

Layers and layers of beans spread out in the sun for drying.

Rows of coffee trees provide a beautiful backdrop to our tour.

We return back to the main deck and are offered two cups of local brew. This is one of the few farms that sell exclusively to local buyers, and we’re eager to snatch up a bag or two of beans for tasty souvenirs.

I reach for a slice of homemade cake to accompany my cuppa.

We make some new friends as well.

Salento is calm, open, and beautiful. It’s the kind of place I’d want to spend a summer in, just walking around town and soaking in the slow pace of life (and drinking plenty of coffee, of course).

We make more new friends on our walk through town (Joel is particularly popular).

It’s early evening and we decide to wind down with a round of , a local game that involves throwing heavy metal objects at gunpowder packets. The object of the game is to make things explode. While drinking beer. I’m not kidding.

Again, beer is a key component.

We arrive in Medellín, Colombia’s hippest city, known for its “eternal spring”. Because the location is close to the equator (and therefore hot) but also elevated (and therefore cold), it’s perpetually caught in a state of warm, breezy, weather.

It’s easy to see why Medellín has recently become a hotspot for expats. The city has an effortlessly cool vibe, and the locals are overwhelmingly friendly

I start the day with a small cup of , the beverage-of-choice by many here. It turns out that Colombians don’t actually drink Colombian coffee—sadly, the beans go for far higher prices abroad, and as a result, most of the industry is exported out to places like the U.S. The locals settle on instant coffee made drinkable with copious amounts of sugar.

Like Bogotá, Medellín is a popular canvas for street artists.

Once home to the infamous Pablo Escobar, Medellín has since evolved into a completely different city. It’s no longer the world’s #1 most dangerous place, and Paisas (the term for the residents of the area) are incredibly proud of how significantly their home has transformed over the last two decades.

We take up a local walking tour to learn more about Medellín’s history. After our first hour, our guide directs us to a group of local fruit vendors for snacks.

We soon learn that the most dangerous areas of the cities are often located behind churches. Most Colombians are Catholic, and so prostitution, drug use, and petty crime happen here so that sinners can immediately confess.

The Rafael Uribe Uribe Palace of Culture stands out in the middle of Botero Plaza, as one of the city’s few European architectural pieces.

We take a quick lunch break and order a classic menú del dia before rejoining our group.

Two of Botero’s most famous statues stand in the San Antonio Plaza, an empty square that was subject to a terrorist attack during the height of the city’s most violent period. The bomb was hidden inside one of the statues. Rather than remove the destroyed piece, Botero donated a second, identical bird.This was to remind the local people of not only how much they had suffered, but also how much they had to look forward to in the future.

No paisa brunch is complete without a complimentary shot of aguardiente, the local liquor.

Our next stop is San Gil, the adventure sports capital of Colombia. We’re here for one reason only: to fly.

We travel to Chicamocha, a steep canyon famous for its thermal winds. It’s a perfect spot for paragliders.

Joel and I are hooked up separately to each our guides, and we proceed to (literally) jump off a cliff. Lift off .

For our last week in Colombia, we take a bus up to the Caribbean coast. We arrive in Santa Marta, a small beach town, and check-in at our hostel. It also happens to be an ex-drug cartel villa, and we both spend the next few moments hoping we’ll stumble across old cocaine money that we can then use to fund a second trip

Being by the sea and all, Santa Marta makes for a wonderful seafood destination. You’ll find fresh ceviche stands all over town.

Although we were hoping to catch a bus to Tayrona Park, our bus takes forever and we arrive too late to squeeze in a visit. We instead spend the day by the pool, which isn’t too bad of a trade-off.

I order a to-go box of coconut rice and egg for lunch, accompanied by a welcome can of Club Colombia.

We spend our first day wandering the colorful streets, stepping into a store or café every few minutes to escape the intense heat. Tropical weather is no joke.

The culture here is fascinating—a unique blend of Colombian and Caribbean.

During our explorations, we find more tourists than anywhere else in the country, even though it’s low season. It seems that most people who visit Colombia prioritize Cartagena.

More postcard-worthy streets. If only I wasn’t melting while taking this.

I discover the joy that is Cartagena’s food scene. Coconut, fish, and fresh fruit are popular ingredients here.

For our final night, we head to a small square outside our hostel, where street vendors are lined up and already serving dinner.

San Andrés is a small island located near Nicaragua but politically tied to Colombia. We fly there for our last few days abroad, where we’ll be staying at an all-inclusive resort to celebrate a successful year of traveling.

Our days are mostly spent swimming, drinking, and eating. No complaints here.

A perfect end to an amazing year.