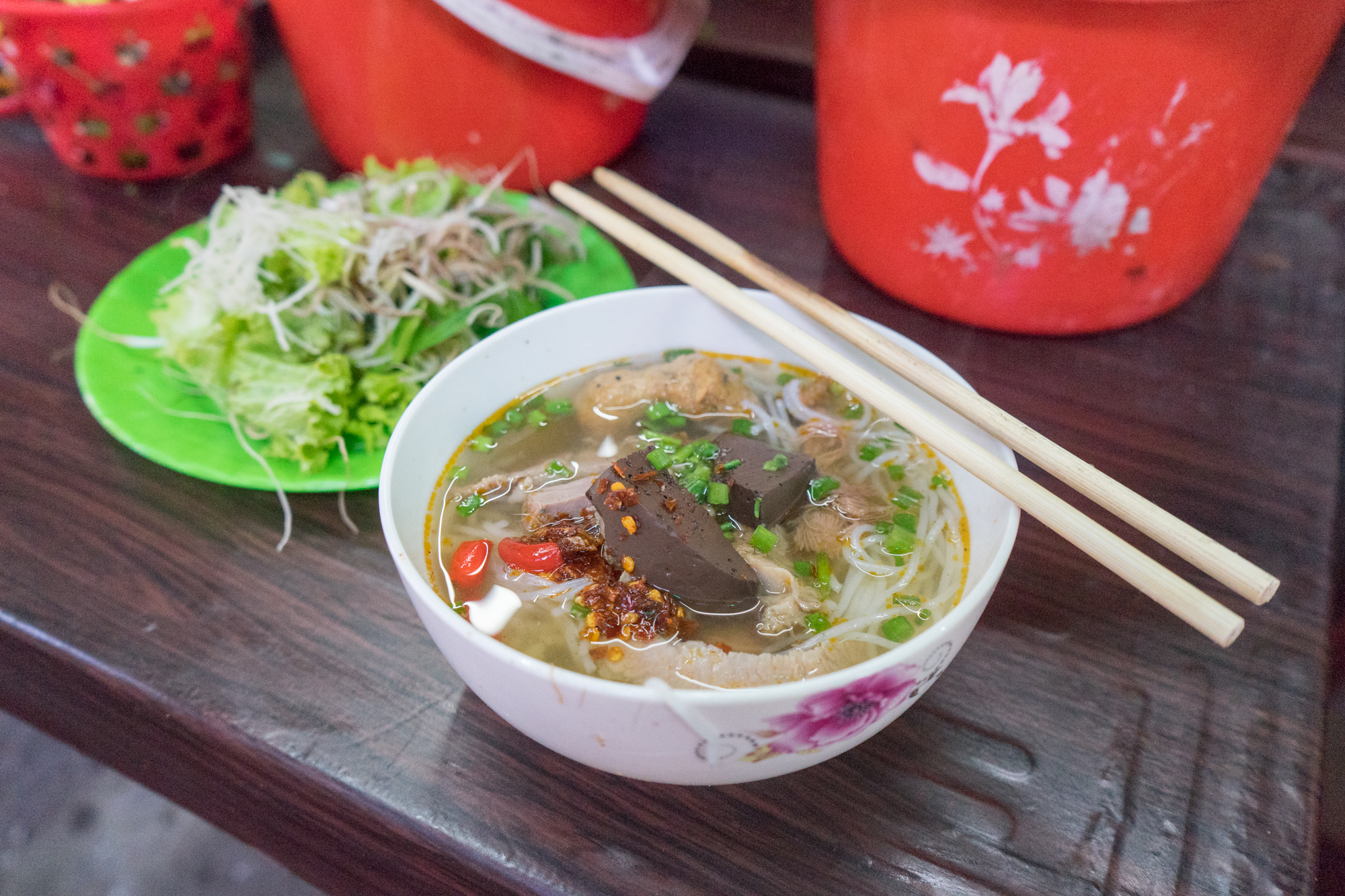 Anthony Bourdain once called bun bo hue one of the greatest soups in the world.

What he failed to mention, however, was that finding a great bowl of it even in Hue could prove challenging.

Bourdain’s popular “Parts Unknown” series travels to various destinations throughout the world, exploring culture and food through the eyes of local residents. Hue, Vietnam, was one such topic for an episode a few years ago.

Hue was Vietnam’s capital until WWII. And as the home of the imperial government at the time, many of the local chefs were called to create different dishes and treats in a rotation diverse enough to keep the royal family pleased. And thus, the diverse, snack-driven, and delightful culinary scene of Hue was born.

We visited the city back in October, during our month in Vietnam. Hue’s most famous dish, bun bo hue, can be found in street stalls all around the city. But Joel and I were on a quest to find the best, so we (attempted) to follow in Bourdain’s footsteps.

We arrived at Dong Ba Market around lunchtime. The day prior, our free “walking tour” guide had shown us around the area and helped us buy local fruits to try. We hadn’t seen any food stalls at the time, but after a brief Google search, we discovered that a collection of vendors could be found deeper within the market.

The problem was that Dong Ba Market was very deep, a maze of fresh produce and fish paste and souvenir shops. We wandered around the confines of the market for what seemed like ages before finally stumbling across a small selection of noodle vendors.

A few locals pointed us to a stall selling bun bo hue, and we sat down, famished. Our lady kept bringing us different dishes besides the dish in question (as her neighbor tried bringing us drinks), but we waved both away politely. “Just bun bo hue,” we repeated, over and over again.

The dish that finally came out looked a little disappointing. It was a small portion that resembled something closer to a wilted bowl of pho more than the fragrant mix of ingredients we had heard about. At this point, it was becoming clear that we had stumbled across the wrong shop, but we were too hungry to argue. And when it comes to Vietnam, you’re likely to find a good meal at any place you come across, so why not give it a chance?

It ended up a little overpriced for the size and effort, and not very memorable. We cut our losses and went to pay. The owner wanted to charge us double for what we ordered, despite clarifying the price when we first sat down. She insisted that that the meatballs served alongside the dish (a common ingredient in bun bo hue) were an additional charge that cost the same as the soup itself.

What followed was a heated argument, awkward silences (she tried ignoring us when we talked to her), and an unceremonious kicking of a bench on my part. We forked over the 80,000 dong she demanded and left in a bitter mood.

It was one of our only interactions with locals during our trip that was spoiled by any sort of ill-will or outright attempt to scam us because we were foreigners. It was bound to happen at some point, but that didn’t make it any less enraging.

After cooling off at a nearby supermarket (we were still hungry), I dug a little further into some travel blogs and finally came across a picture of the real stall we had been looking for. Determined to find some sort of justice after getting ripped off for a crap lunch, we ventured back into the market to try and seek the real deal.

We showed our tiny iPhone image to several helpful locals who continually pointed us in the right direction, clue after clue, scavenger-hunt style. Our search came to an end after we found a sign with a picture of Anthony Bourdain’s face.

The soup was great, and the lady was much friendlier than our previous encounter (justice, found!). My only regret was having wasted my stomach on a terrible meal beforehand.

One of our main issues in our search for the best bun bo hue was the lack of information found online and among travel bloggers. Parts Unknown doesn’t disclose a specific location, and every page I read about the place referred to it vaguely as somewhere “inside the Dong Ba Market”. The closest thing to directions I could find simply told us what side of the market to enter from. The problem is, there are a handful of different “food courts” inside, and all are spread out within different alleyways. You could wander the market for an hour and not find them all!

To save you the same grief we experienced, I’ve put together a specific and detailed roadmap (pictures included!) to help guide you to the correct place.

It might take a bit of effort, but if you end up traveling to Hue, I hope you find this magical spot. It’s worth it (and if you do, let me know in the comments below)!