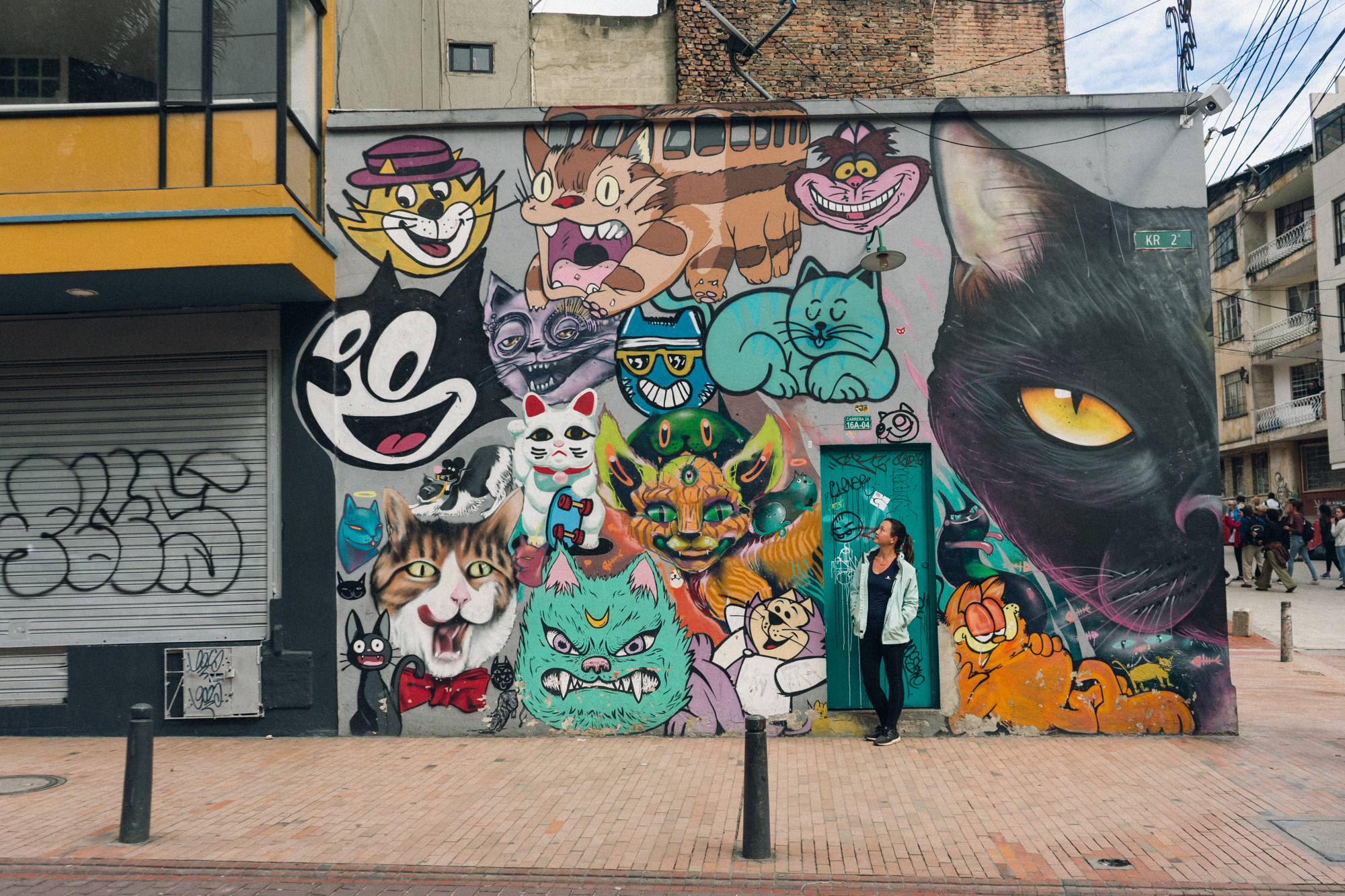 Joel and I are officially in Colombia! Which also happens to be the last country of our trip.

That’s right—this year is almost up. But before we throw in the towel and head back home to reunite with family and friends, we have a solid three weeks planned in this beautiful country. Everything from horseback riding through coffee farms, to paragliding over canyons, to lounging in the Caribbean.

I’m excited, to say the least.

Our first stop on the itinerary was Bogotá, the sprawling mega-capital with a violent past that’s slowly reinventing itself with each passing year.

I once took a graffiti tour back when I was studying in Paris, and I learned so much about the city and local culture that I still carry with me today. Considering Bogotá is one of the world’s best places for street artists, I knew the Bogotá Street Art Tour would be a more than worthy way to spend a free afternoon in the city.

How Street Art Became a Movement

Perhaps one of the reasons why Bogotá has gained such a reputation for street art is that graffiti was recently decriminalized by the local government. Today, there is no jail-time involved if you’re caught vandalizing property—only a fine (albeit a somewhat pricey one, at $100 USD, when compared to the average local salary).

This has been the city’s policy since 2011, when a 16-year-old boy, Diego Felipe Becerra, was murdered by the police after being caught spray painting his signature Felix the Cat on a public wall. Protests ensued, legislation was passed, and now artists can officially wander the streets of neighborhoods—like La Candelaria—in peace.

The situation briefly escalated once more in the following year, when Justin Bieber (you read that right) visited Bogotá during his South America tour. He somehow found it appropriate to paint his own mural under a bridge pass, depicting the Canadian flag, with a marijuana leaf replacing the classic maple (I wish I was joking). He had a police escort with him and the whole event was televised live around the city.

Local artists thought this strangely ironic, considering Diego had been shot in the same area just six months prior. It was clear to them that the recent police crack-down on graffiti was more about where you came from and less about the act of vandalization itself. They organized a 24-hour street art marathon in protest, with around 300 local artists in attending.

A Look into Colombia’s Tremulous Past

Street artist DJ Lu painted the mural above as a testament to the thousands of homeless citizens who lost their lives in the nefarious “false positives” scandal that rocked the country in the early 2000s.

In an effort to show progress in the war against drugs and to continue receiving funding from abroad, many Colombian soldiers kidnapped homeless people off the streets (sometimes with promises of a better life), took them out into the remote countryside, dressed them as guerrillas, and shot them on the spot. As many as 10,000 Colombians died during the campaign.

DJ Lu painted the portraits of several homeless people on this wall, as a way to remind the community that their lives are just as significant as ours.

Further down the wall is a painting depicting the issue of government exploitation of the country’s poor and rural citizens. Colombia faces one of the largest forced-displaced populations in the world, with an estimated 1.5 of the 8 million of the residents living in Bogotá who were pushed from their rural homes into the city.

The bags lining the bottom of the mural are deliberately ambiguous; they might represent gold, or coffee beans. It’s no secret that South American coffee farmers have been subject to exploitation in the past (hence the new “fair-trade” label on paper cups found in hipster cafés around the world).

Interestingly, our guide mentioned a line about the “federación” (likely referring to the Federación Nacional de Cafeteros) purchasing local beans at low costs and then exporting them abroad for a much higher price tag (and pocketing the difference). I couldn’t find anything negative about the FNC online, only that they regulate a base salary for farmers in times of economic downturn, so if anyone has any more information on the subject please comment below!

The social mood is becoming increasingly accepting when it comes to public artwork. Many businesses are now commissioning artists to paint murals on their own buildings in order to prevent low-grade tagging, or as our guide put it, “the most popular and the most unpopular form of graffiti in the world”. Tagging refers to the simple scribbles that are quickly sprayed on walls that leave a very rough look to the neighborhood (unlike more intentional paintings).

One of the unwritten laws of street art is to never paint over another artist’s work. If you have a Grade A mural sitting outside your doorstep, your restaurant ends up looking like a hip craft brewery or coffee shop, rather than a halfway house.

Although Bogotá has managed to amass close to 5,000 works around the city, tensions between artists and the government remain high. Enrique Peñalosa, the current mayor, is currently looking to revise or even roll back the law that followed Diego Felipe’s murder.

While the future of street art is uncertain here, Bogotá’s present remains colorful.