Autumn is finally rolling in, which means it’s time to wrap up the last official month of summer. You know how sometimes, life will just dribble by for a few weeks, with nothing worth noting occurring? Well, August was the complete opposite of that. There were plenty of great moments, as well as a handful of awful ones, but at least we weren’t bored.

We started off the month in Seoul, South Korea. A lot of long-term travelers say that it’s easy to get burnt out if you move too fast, so we picked Seoul as a sort of resting spot. It was much more expensive than expected, but it was modern and clean, and Joel’s Korean skills helped out a lot with getting around. We also took some time to check out Jeju-do, an island just south of the Korean mainland, and heavily recommended by locals.

By the last week of August, we were off to Shanghai, which was a major culture shock. I’ve been to Beijing several times with family in the past, and each time I thought about how difficult it would be to travel to the country alone. And well, I was right. Landing in Shanghai gave us a taste of the “real China” (as my mom put it, when I started complaining over FaceTime). But more on that below. 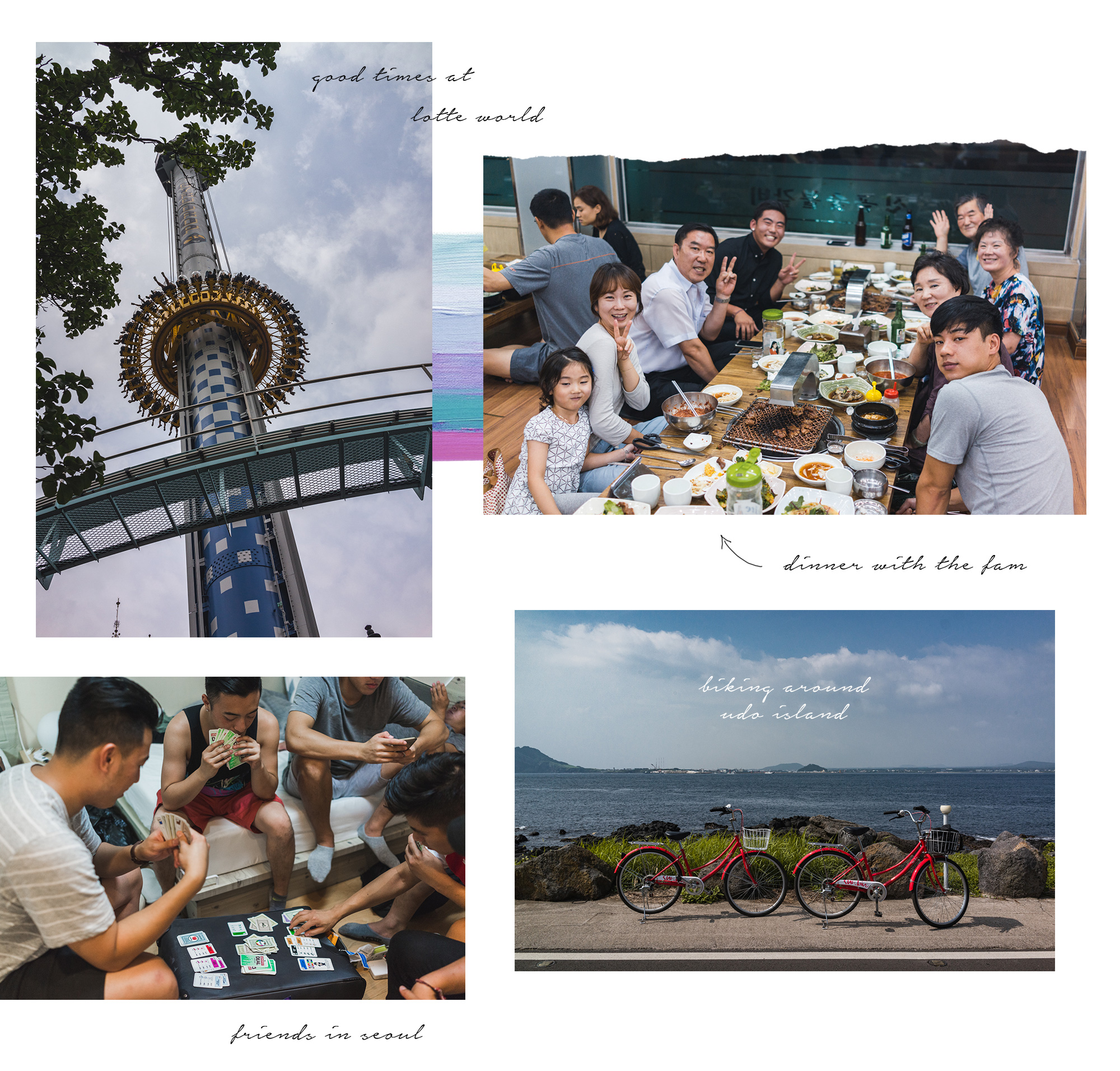 Experiencing the 24-hour lifestyle of Seoul: Our time in South Korea happened to overlap with a group of mutual friends who were vacationing in Asia for a few weeks. We spent a few days together while eating, drinking, karaoking, and clubbing until the sun rose. While Joel and I also enjoyed our time alone in Seoul, I’ve come to believe that it’s really a place to experience with families and friends.

Hanging out with Korean locals: Joel has family all over Korea (none of whom he had met prior to coming here), and they were kind enough to take us out in both Jeonju and Seoul. It can be hard getting to know local culture without some sort of “in”, and I’m grateful that we were able to take a peek inside modern, Korean family life.

Biking in the rain on Udo Island: While in Jeju-do, we took a day trip to a smaller island off the eastern coast, known as Udo Island. We couldn’t rent a scooter (no international driver’s license), so we grabbed a pair of bikes instead and rode around the circumference of the island. A few hours in, it started pouring. There wasn’t much we could do, so we ended up furiously biking the last few miles in the rain. We were soaked and laughing hysterically the entire time. It was great.

Spending the day at Lotte World: This killed our budget, but it was so worth it. The rides and attractions at Lotte World were awesome on their own, and getting dinner at a bougie lobster buffet after was the cherry on top. Totally worth eating ramen for a week after.

Unexpectedly riding the fastest train in the world: The night before flying to Shanghai, I quickly looked up directions from the airport to our hostel and saw that we needed to take the “maglev” to the metro. We later got on said train and watched the speedometer creep up to 300 km. It was terrifying. Turns out were unknowingly riding the fastest train in the world, and six minutes later we were dropped off nearly 20 miles from the airport.

Exploring Shanghai with friends: Our friend, Audrey, had been living and working in Shanghai for a few months by the time we arrived. She showed us and Tom (another friend who was visiting) around for a week. Her family absolutely spoiled us with good food and good company.

Good weather in Shanghai: After two months of suffering through 90% humidity, we were pleasantly surprised when the heat dropped off dramatically by our third day in Shanghai. We were expecting our time in China to be as sweltering as Japan and Korea. Not having to hibernate for the entire afternoon made our time much more enjoyable. 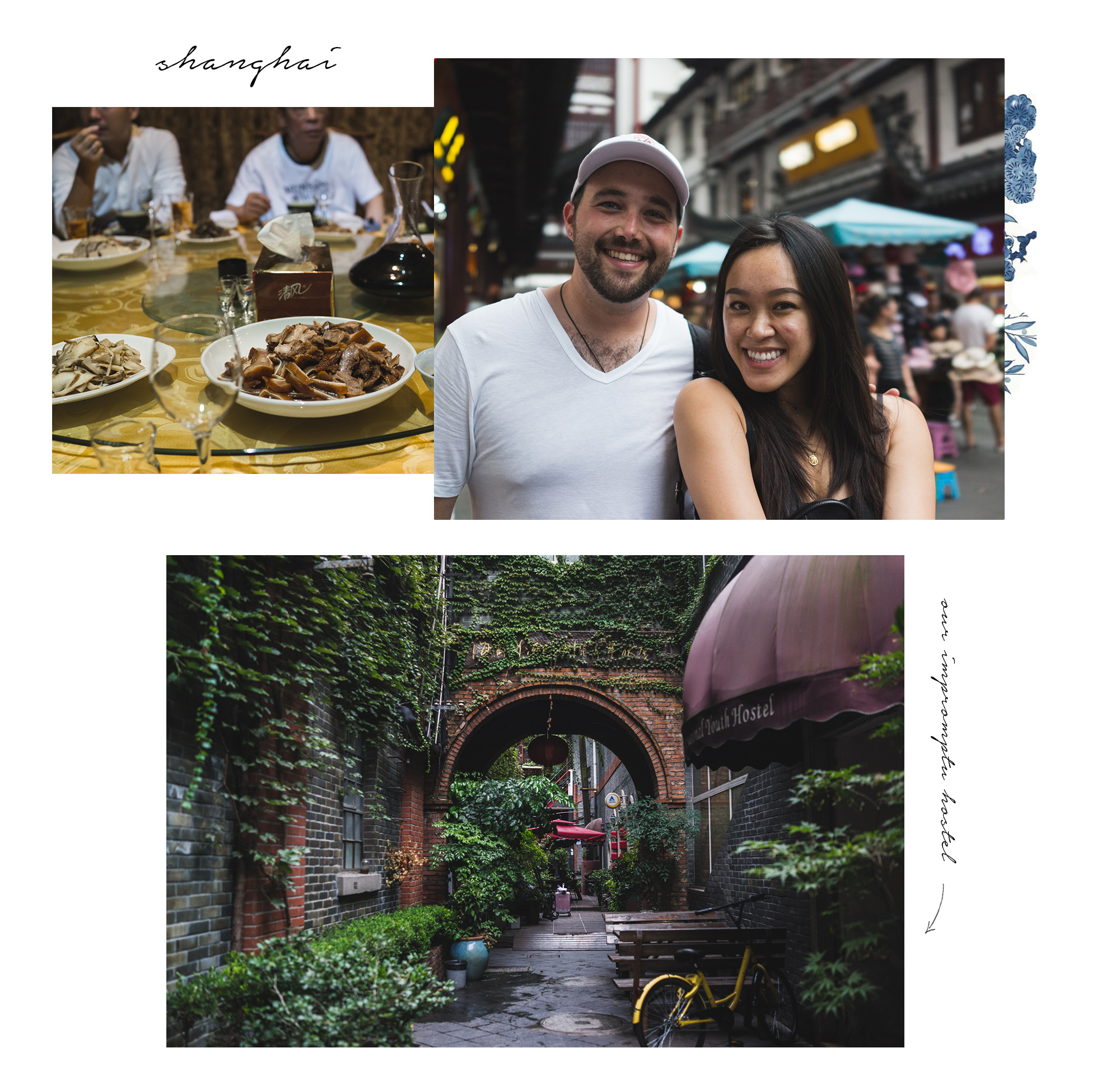 Temporarily losing my passport: Okay, I don’t really have any excuses for this one. I was an idiot and left it on the plane when coming back from Jeju-do. Luckily, we realized my mistake soon after arriving back in Seoul, and took the metro directly back to the airport to pick it up.

Permanently losing our wallet: A certain travel partner of mine left our shared wallet on the metro (no, I didn’t yell at him). Luckily, my type-A self divided our cash and credit cards into different locations, so we did have some backups to work with. The only irretrievable items were our driver’s licenses, which unfortunately means that we’re canceling our Iceland road trip plans. 🙁

Routine missile drill in Seoul: This is a twice-a-year response drill that happened to go off during our time in Korea. When you hear warning signals blaring across the entire city like a zombie apocalypse is about to happen, it can be a little frightening. Especially with all the talks about nuclear testing lately.

Major Airbnb issues in Shanghai: Our first night landing in Shanghai was a mess. We arrived at our Airbnb address, hungry and sweaty, and spent an hour trying to figure out where in the world our apartment was. When our host finally called us back, she sent her son to taxi us to a new apartment (apparently the one we were /supposed/ to be staying in was having electrical issues). The next 24-hours involved broken furniture, a dripping AC, and some fairly subpar hygiene standards. We complained to Airbnb, got a refund, and checked into a hostel the next day.

Short rib KBBQ in Jeju-do: We picked a restaurant at random and ended up loving it. The meat was almost as good as Ushida back in Osaka.

Rice cake and cheese skewers: Two of my favorite foods stacked together, then grilled and drizzled with sweetened condensed milk. What more could you want?

Pig tail KBBQ: We ate a LOT of KBBQ during our time in Korea, but this was one of the most unique and unexpectedly delicious experiences we had.

Sundae/tteokbokki/tempura: A really strange combo, but so, so good. Sundae is Korean blood sausage, best enjoyed from a street stall at 1 am.

Street bao and xianbing: There were two street stalls right around the corner from our Shanghai hostel that we became obsessed with. One sold various bao and shaomai pieces, and the other, xianbing (Chinese meat pies). All were only $0.20-$0.50 each.

Shengjianbao: Basically xiaolongbao, but fried. AKA one of my favorite foods of all time. 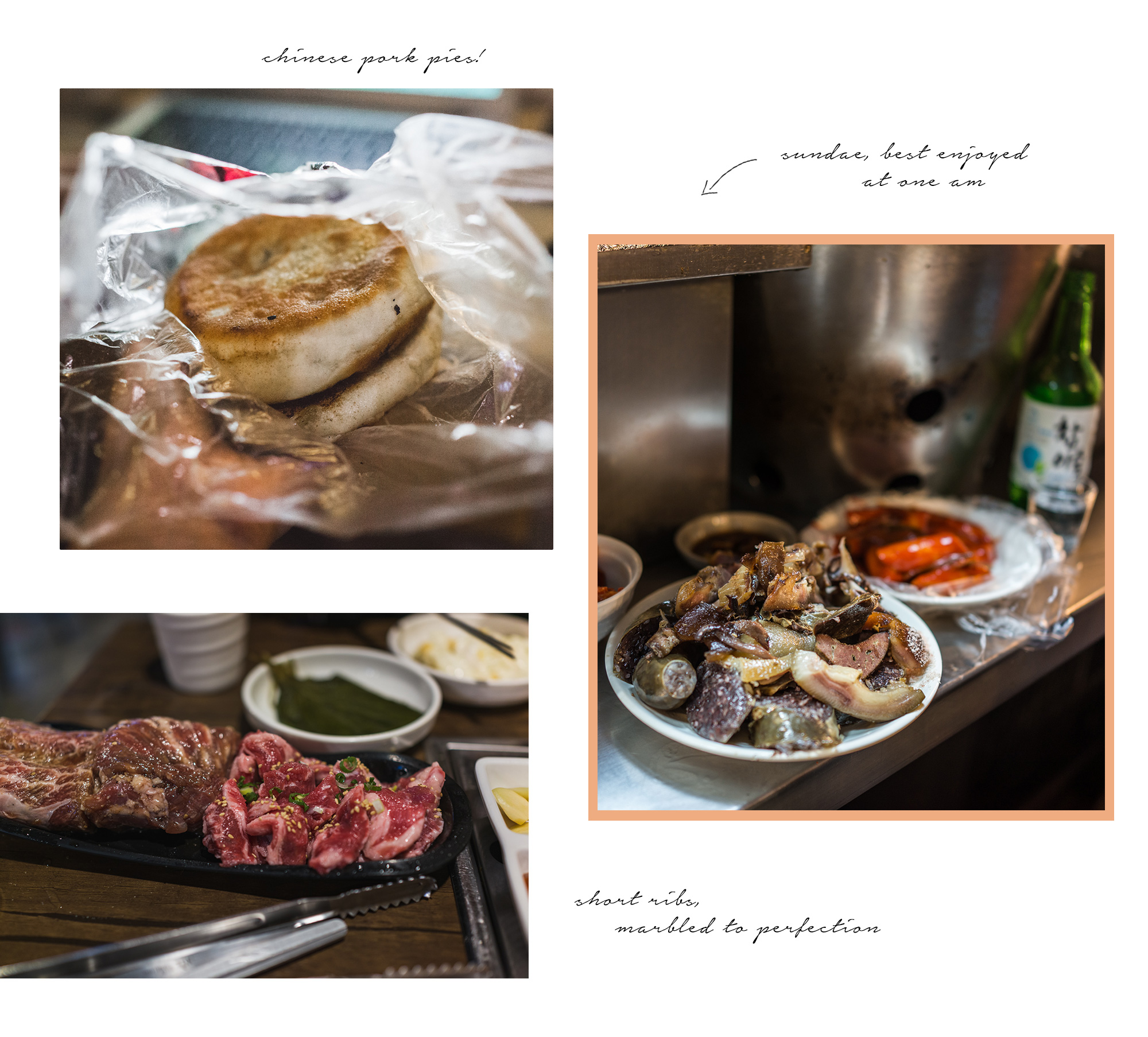 The Month in Numbers:

We’re hitting up the rest of China (Chengdu, Lijiang, Guiyang, Guilin, Shenzhen) and its neighbors (Hong Kong, Taiwan) for the majority of September. Looks like there will be a lot of cultural history and—more importantly—good food coming in the near future! If you have any recommendations for these destinations, please share in the comments below.