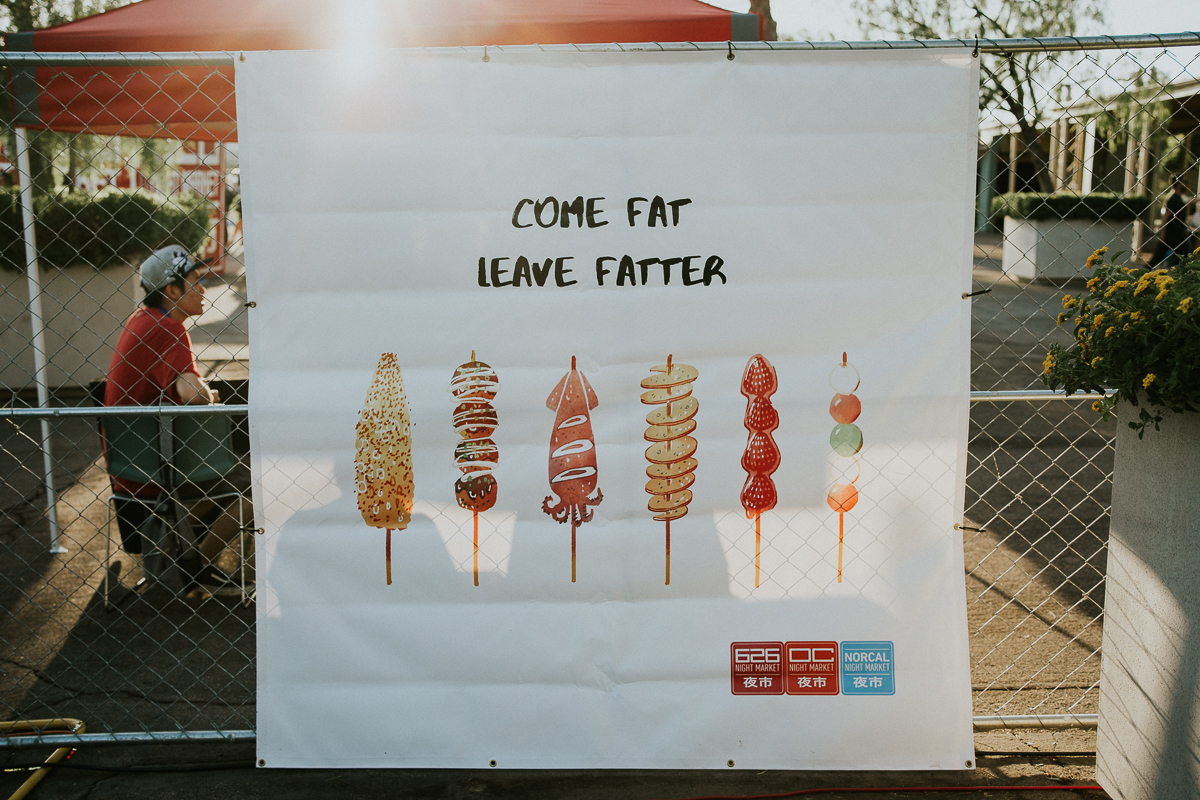 One of my favorite parts of traveling in Asia is the night markets.

It’s one of the things I miss most about that region of the world—not just the dishes themselves, but the atmosphere of it all.

The smoke and fumes that swirl upwards in plumes under the dim lamplight, the vendors sweating and shouting in a chorus of sound and heat.

The menus and signs with bright, colorful illustrations that dazzle and overwhelm.

The flames licking the grill and the rows of eccentric snacks prepped for immediate consumption.

The curious whispers, and the first moment when you sink your teeth into something juicy, meaty, tender—only to finish it all too soon and hop back in line for a taste of something else.

California may not be Asia, but there’s an Asian immigrant influence that grows larger every day; and prime evidence of that trend is the 626 Night Market.

Located just east of LA in the sleepy suburb of Arcadia, this annual foodie pop-up surfaces for just a handful of weekends each summer. Each market typically draws over 80,000 visitors and more than 200 vendors. It’s even grown so popular in recent years that it’s since expanded to OC and Norcal.

I had been to the market once before back in 2016, and was long overdue for a visit. I teamed up with Joel to take on as many vendors as we could:

Lucky Elephant is a Xi’an (a city in China) themed stand that seems to only exist within the confines of the 626 Night Market. They serve famous Xi’an dishes like cold noodles, beef burgers, and the real star of the show: their lamb kebabs.

If you’re looking for protein, do not pass these guys up! Each chunk of lamb was incredible, with a fatty mouthfeel with a spattering of cumin, and charred to perfection.

The second item we ordered was the chicken hearts. Nothing earth-shattering, but chewy and enjoyable all the same.

Boba is one of the most popular categories of food & drink at the market. There are plenty of places to choose from, ranging from international chains like CoCo to independent stands like Boba Bros. Even most non-boba related booths sell some form or other of milk tea. At the 626 Market, you are spoilt for choice.

We landed on Sweet Honey, a Hong Kong dessert chain. I ordered a coconut juice with grass jelly and OH MY LORD it was otherworldly. Between the tropical hints of coconut cream and the light airiness of the jelly, it was the perfect compliment to East LA’s sweltering summer heat.

I’d call this one of my two favorite purchases of the night (alongside the ice cream, which I’ll get to in a minute). Although reflecting back on the experience, I realize now that part of my enthusiasm might have been from experiencing real coconut juice what might have been the first time in my life. It wasn’t until writing this that I discovered coconut juice was an entirely different product from coconut water and coconut milk. I am a changed woman.

I was really excited for these guys, as I planned on it being my main “meal” of the evening (What? You mean I can’t just eat dessert?). We ordered a serving of extra spicy tenders and fries, which I sort of regretted upon realizing that “extra spicy” really just meant “extra red pepper powder”. And there was a lot of powder. It gave the chicken a granular quality that I wasn’t a fan of (although it was pretty spicy, I’ll give them that).

At least the fries were good.

Mumu Bakery serves several desserts but is famous for one in particular: their croissant tayaki, a unique spin on the Japanese snack whereby the soft, waffle exterior is replaced with a flaky and crispy shell.  It comes with a variety of fillings beyond traditional red bean, of which we decided on the Nutella, rice cake, and custard.

The rice cake was my favorite—the chewy interior and buttery croissant contrasted nicely, with just a hint of sweetness. Joel voted for the custard (but then again, he’ll eat custard in just about anything).

Joel has a thing about lobster (that “thing” being an eye-widening, jaw-dropping auto response whenever he spots it on a menu), and he was on a mission to track down a decent plate from one of the several lobster vendors at the festival.

We settled on Northern BBQ. It was less expensive than most of the others, but we could taste the price difference. The meat was somewhat tough and Joel actually didn’t even end up finishing it.

I saved the best for last: an LA-based frozen dessert shop that is pretty much the reincarnation of my being (in the form of a hipster ice cream menu).

(I would later discover that the company also produced a range of other flavors, including early grey, Ramune, Hawaiian toast, elderflower buttermilk, dulce de leche, and Mexican hot chocolate. Did I tell you this was my place or what?)

I had found heaven.

After a torturous debate between options, I opted for a double scoop of ube crunch and mango sticky rice. Both were as delicious as I had imagined, but the latter really stood out to me—it actually tasted like mango sticky rice.

To this day I can’t quite explain it, but the moment reminded me somewhat of the bubblegum scene in Charlie and the Chocolate Factory: “It really tastes like pea soup!”

Luckily, I did not transform into a giant mango.

Although the 626 Night Market has packed up for the rest of 2019, the new Norcal Night Market location is up and running for September!

You can start planning next year’s 626 Night Market adventure here.